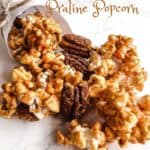 Why Should Make This Awesome Treat

Bourbon Pecan Praline Popcorn is a yummy munch for tailgating, movie nights on the couch, Halloween parties, or any time you want to impress your family and friends. Even better, it will stay fresh in an airtight container for up to a week if it lasts that long.

All you need to do is to heat butter, light brown sugar, light corn syrup, and a bit of salt over medium heat. When the mixture starts to boil, reduce the heat, stand back and wait 5 minutes – no muss, no fuss.

With the holidays just around the corner, you might consider packaging the Bourbon Pecan Praline Popcorn in decorative treat bags for homemade gifts!

The ingredients for this yummy treat are typical of regular caramel corn, with two exceptions.

First, as the name implies, the caramel is flavored with Bourbon. The Bourbon doesn’t result in a boozy taste but rather a subtle undertone that makes you go WOW!

Second, I’ve added toasted pecans instead of the regular peanuts. After all, it wouldn’t be Pecan Praline Popcorn without the South’s favorite nut!

The Popcorn and Pecans

My preference for the popcorn is to make my own using the technique in my Skinny Microwave Popcorn in a Paper Bag.

First, I poured the unpopped kernels into a brown sandwich bag. Then, I folded the top three times.

Next, I placed the bag in my microwave with the fold-down and chose the popcorn setting. Invariably, I add another minute or so after the popcorn cycle has ended to ensure that the maximum number of kernels has popped.

After the popcorn had finished popping, I poured it onto a wire cooling rack that I’d placed on a rimmed baking sheet. The reason for doing this is that the unpopped kernels drop down to the baking sheet leaving only popped corn behind!

After the popcorn was ready, I transferred it to a large bowl. Then, I poured the toasted pecans on top of the popcorn.

I didn’t stir the two together at this point. The reason was that the pecans were heavier than the popcorn, and I wanted to be sure to coat the pecans with the caramel.

As I previously indicated, it’s super simple to make the caramel.

First, I added the butter, brown sugar, corn syrup, and salt to a small saucepan over medium heat.

Once the mixture had come to a boil, I lowered the heat to medium-low. I let it continue to boil undisturbed and uncovered for five minutes.

After five minutes, I removed the pan from the heat. Then, I added the Bourbon and baking soda.

I stirred the mixture for about a minute to ensure that everything was well incorporated. I had to be careful here because the mixture bubbled up quite a bit with the addition of the baking soda.

I didn’t have to worry too much about the popcorn and pecans being coated in caramel at this point, which I’ll explain in a minute.

I dumped the bourbon pecan praline popcorn into a large disposable aluminum roasting pan and spread it out.

I placed the bourbon pecan praline popcorn into a preheated 250°F oven for one hour. During the hour, I stirred the mixture every 15 minutes.

Stirring the mixture helped to evenly coat the popcorn and the pecans with caramel that was still melted from the oven heat.

After an hour, I poured the Bourbon Pecan Praline Popcorn onto a piece of parchment paper for it to cool.

I had a delightful and crunchy treat that I couldn’t stop eating. The Bourbon Pecan Praline Popcorn was truly addictive with the subtle hint of Bourbon combined with the sweetness of the caramel. You should try it. Yum!

Can store-bought microwavable popcorn be used in this recipe?

I would avoid using store-bought microwavable popcorn. The reason is that the strongish taste will clash with the delicate flavor of the caramel. You could, however, use unflavored SkinnyPop that can be purchased at the grocery store.

Could the kernels be popped in oil on the stovetop?

It would be all right to pop the kernels in oil on the stovetop. I would, however, avoid salting the popped corn.

Can the Bourbon be omitted?

You can replace the Bourbon with two teaspoons of vanilla extract if you would prefer that the Bourbon not be used. This way, it would just be Pecan Praline Popcorn!

What is the purpose of adding baking soda to the caramel?

Alkaline baking soda reacts with brown sugar and corn syrup, which are acidic. The reaction creates lots of tiny carbon dioxide air bubbles. These air bubbles keep the caramel from getting hard, resulting in a softer texture.

Once you see how easy it is to make the caramel for this delicious Bourbon Pecan Praline Popcorn, you might be interested in other options. Here are a few options:

I hope you liked this recipe for Bourbon Pecan Praline Popcorn as much as I do. If so, please consider rating it and leaving a comment. Also, if you’d like to receive notifications of new posts by email, enter your email address in the Subscribe box. 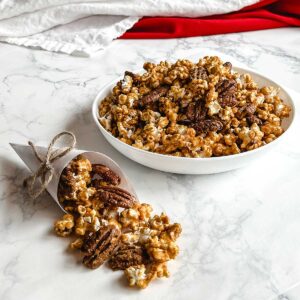