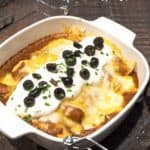 Enchiladas with Awesome Red Sauce – the name says it all! The enchiladas start with a spicy meat mixture wrapped in a tortilla shell. Then, they’re topped with an incredible red sauce, onions and cheese, and baked to bubbling perfection. 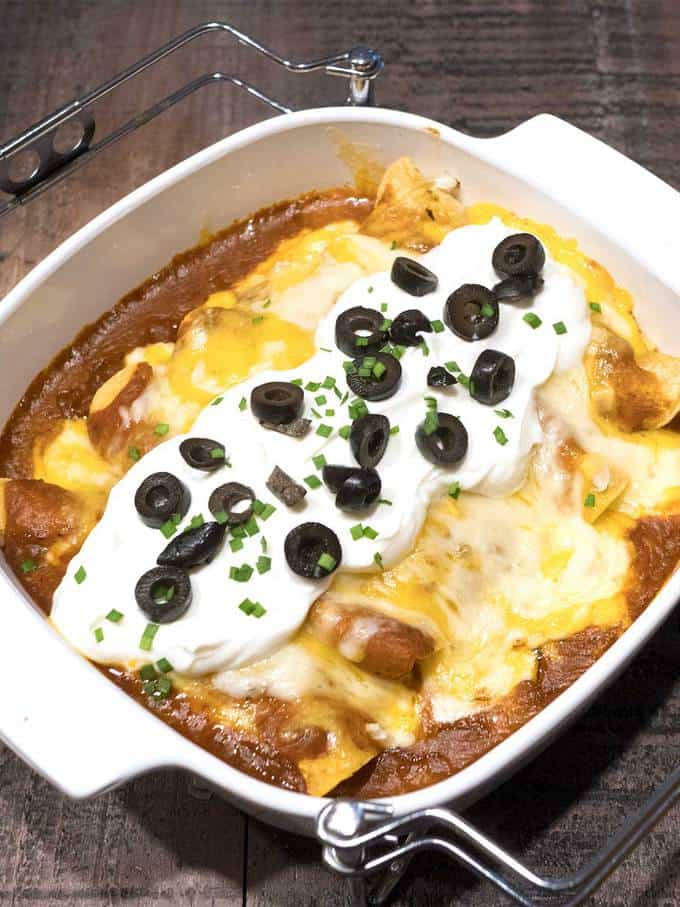 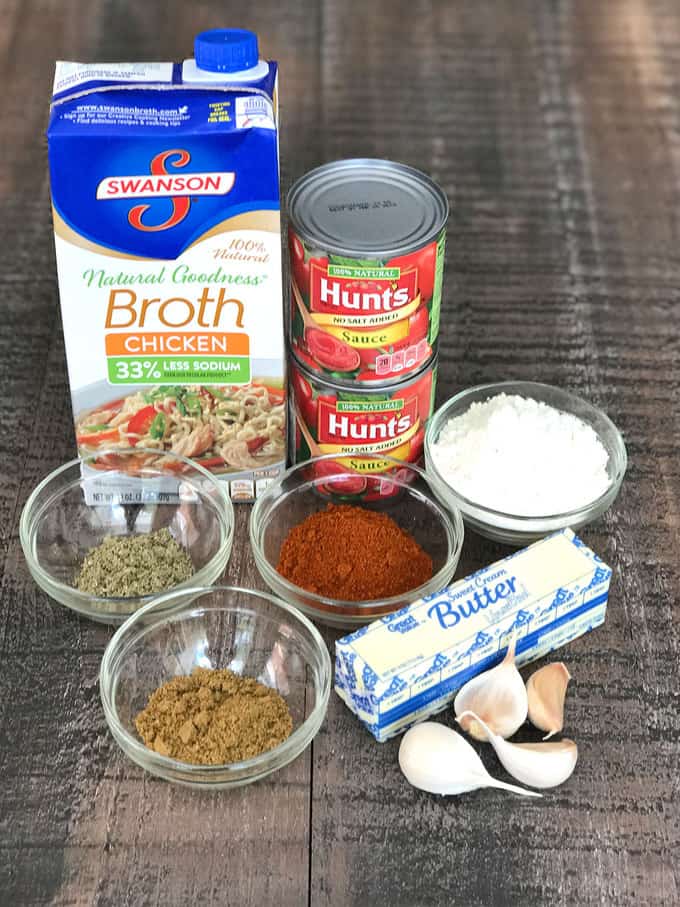 I started by cooking minced garlic in melted butter in a saucepan over medium heat for about 30 seconds. Then, I whisked in the flour to form a roux. After about a minute, I added the chicken broth and tomato sauce, and whisked the mixture to combine everything. Then, I added the chili powder, sage, and cumin, and cooked the sauce over medium heat until it had thickened and was smooth. How easy is that? Once you taste this red sauce, you’ll never go back to the canned stuff! 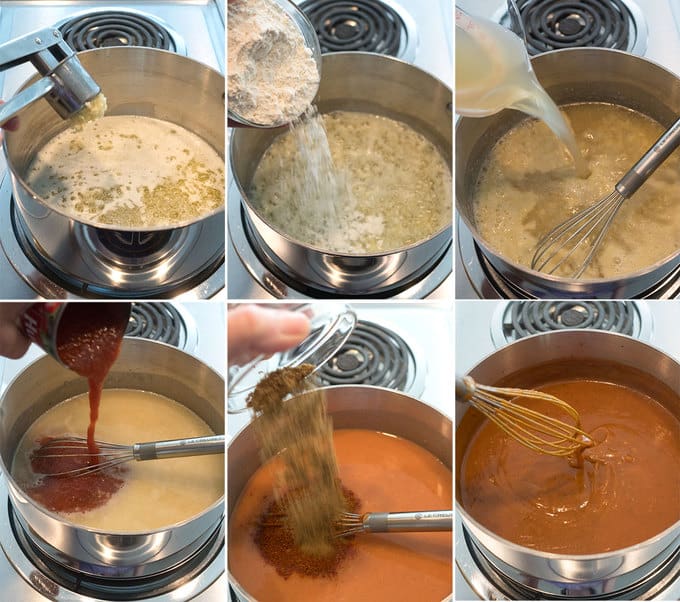 I used the following ingredients for the meat mixture: Ground turkey, onion, garlic, chili powder, ground cumin, dried sage, salt, all-purpose flour, and petit diced tomatoes. I could have used ground beef as well. Generally, I use flour tortillas, but could have used corn tortillas as well. 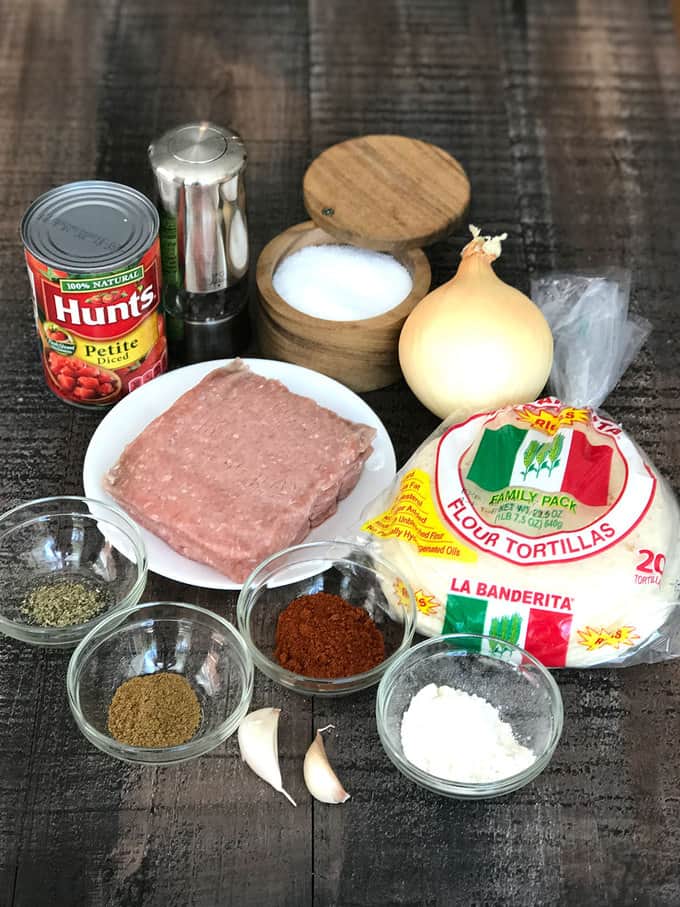 I started by browning the ground turkey in a large skillet over medium heat. Then, I poured it in a colander and ran hot water over it to remove as much grease as possible. While the meat was draining, I sautéed the onion in the same skillet for about 5 minutes. Then, I returned the browned meat to the skillet, and stirred to combine the onion and meat. Next, I added the minced garlic, and cooked the mixture for about 30 seconds until the garlic was fragrant. After that, I added the chili powder, ground cumin, sage, and salt. Then, I added the flour, and stirred to combine everything. Next, I added the tomatoes, and stirred the mixture over medium heat until it had thickened. I actually thought that it was too thick, so I added about ⅓ cup of water. I covered the skillet and simmered the meat mixture for about 30 minutes. After 30 minutes, I removed the lid, and continued cooking the meat mixture until most of the liquid had evaporated. This took 10 more minutes. 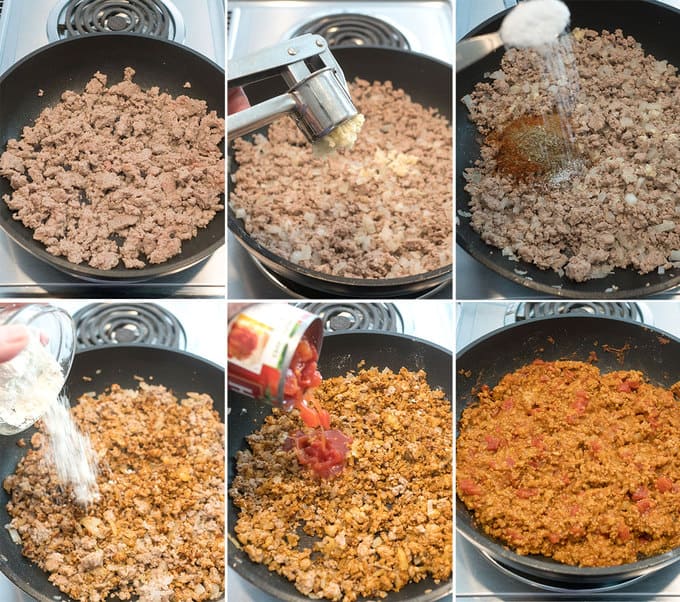 Putting the Enchiladas Together:

I only made enough enchiladas for the Master Taste Tester and me. First, I added some of the red sauce to the bottom of a baking dish. Then, I added about ¼ cup of the meat mixture to a 6-inch tortilla. I rolled up the tortilla and placed its seam-side down in the baking dish. After I had rolled five enchiladas, I topped them with some more red sauce and chopped onions. 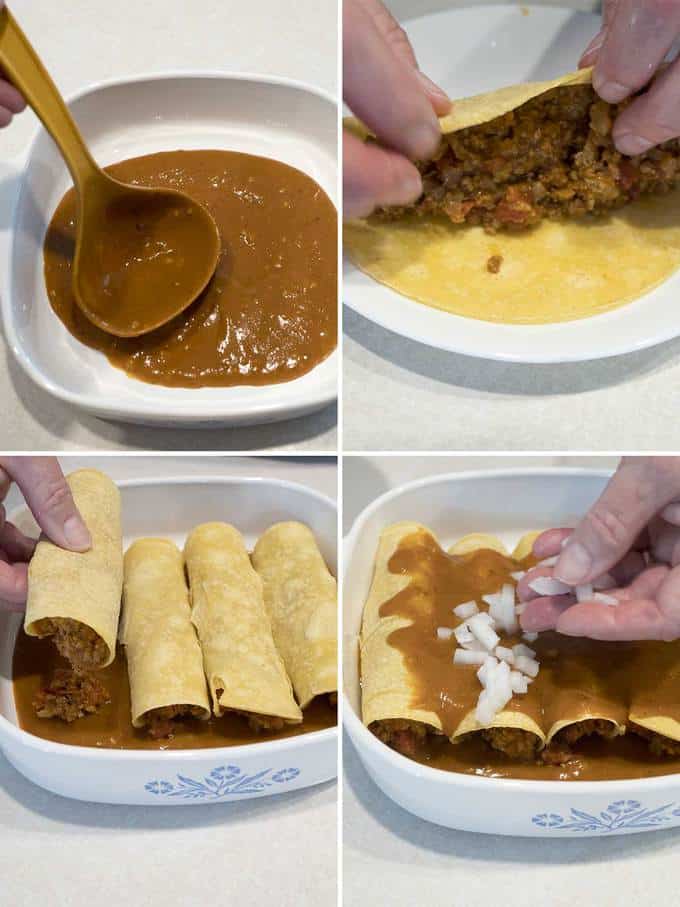 I covered the enchiladas, and popped them into a preheated 350° F oven for about 20 minutes. At this point, I removed the cover, and sprinkled cheese on the top. I used a combination of Cheddar and Monterey Jack cheese. I returned the enchiladas to the oven for another 10 minutes or so until the cheese had melted and the enchiladas were bubbly. 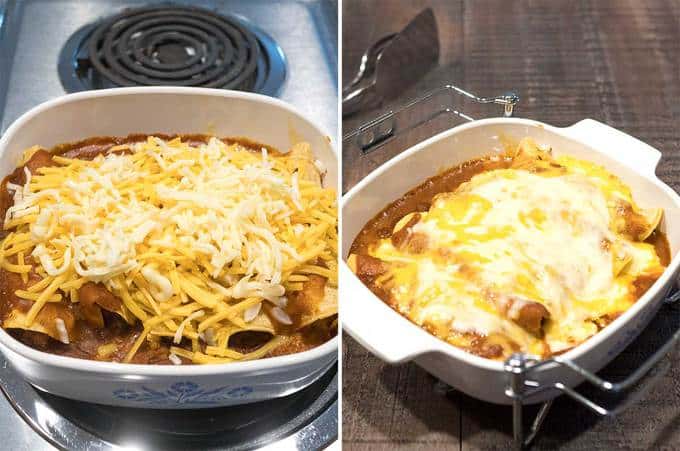 Before serving the enchiladas, I topped them with some sour cream, and sprinkled on sliced olives and chives. I served them with Smashed Black Beans, and a salad. They were absolutely delicious. Yum! 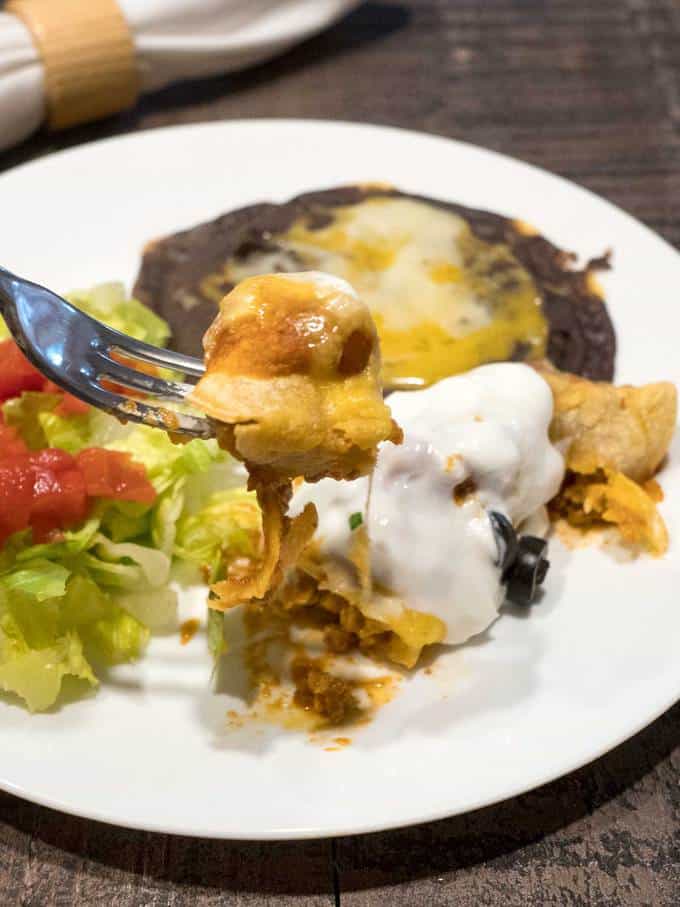 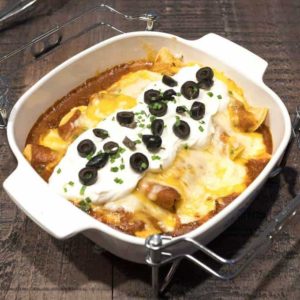