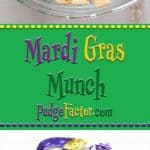 Laissez les bon temps rouler with Mardi Gras Munch! Mardi Gras this year is February 13, 2018 It is much earlier this year than it has been in the past giving you not so much time to whip up Mardi Gras treats. 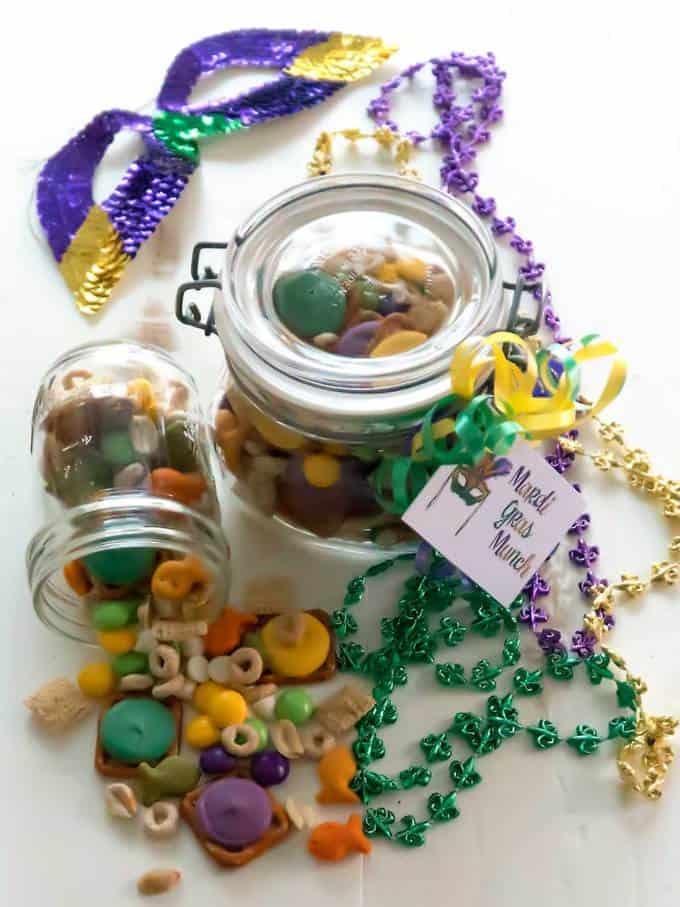 I thought that I’d start with something that is both simple and delicious – Mardi Gras Munch!

Technically, Mardi (French for Tuesday) Gras (French for Fat) refers to Shrove or Fat Tuesday which is the day before Ash Wednesday. In reality, however, Mardi Gras refers to the New Orleans’ Carnival celebrations that begin on January 6 (the Epiphany) and end on Fat Tuesday. Because it’s tied to Ash Wednesday which is tied to Easter, the date changes every year. The colors of Mardi Gras are purple, green and gold (yellow) supposedly because of a visit to New Orleans in the late 1800s of Russian Alexei Alexandrovich Romanov whose colors were purple, green and gold. Purple represents justice; green represents faith; and gold represents power. Because it’s tied to religious dates, Mardi Gras is actually celebrated all over the world. And now you know the rest of the story!

You can really use whatever ingredients you like for Mardi Gras Munch. I do, however, think that it’s important to include the traditional Mardi Gras colors of purple, green, and gold (yellow). Therefore, I used the following ingredients: Rice Chex, white baking chips, Mardi Gras colored chocolate pieces, Cheerios, Goldfish Colors, Mardi Gras Pretzels, and peanuts. 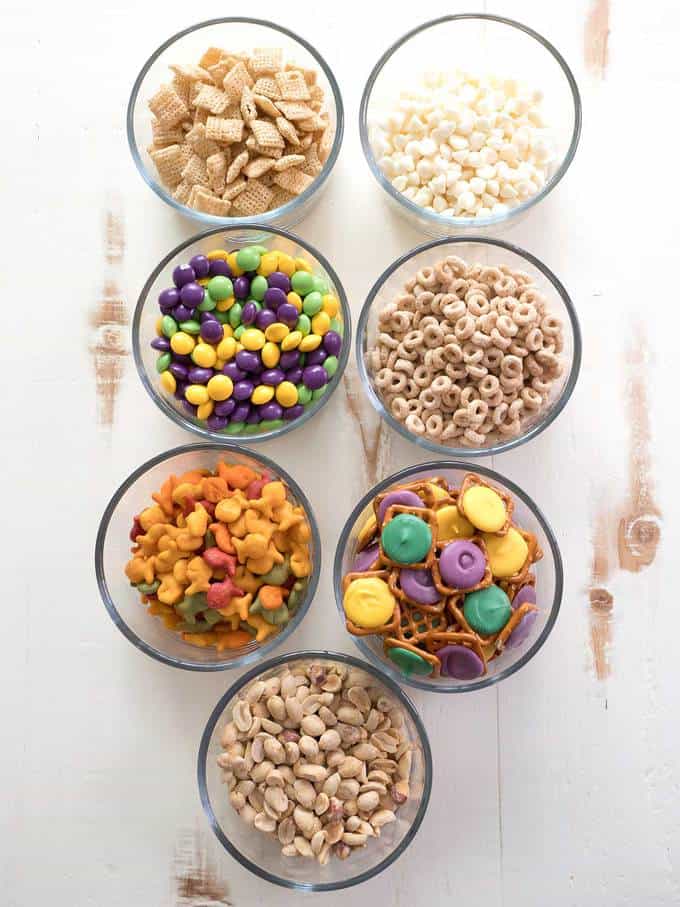 I started by making the Mardi Gras Pretzels. For this, I used Snyder’s Butter Snap Pretzels, and purple, green and yellow candy melts. First, I put some of the pretzels on a microwave safe plate. Then I topped each pretzel with a candy melt. I microwaved the pretzels and candy melts on high for about 40 seconds to partially melt the candy discs. The actual time to do this will be dependent on your microwave. Anyway, I then carefully pressed each candy melt to ensure that it would stick to the pretzel. I allowed the Mardi Gras Pretzels to cool completely before moving to the next step. 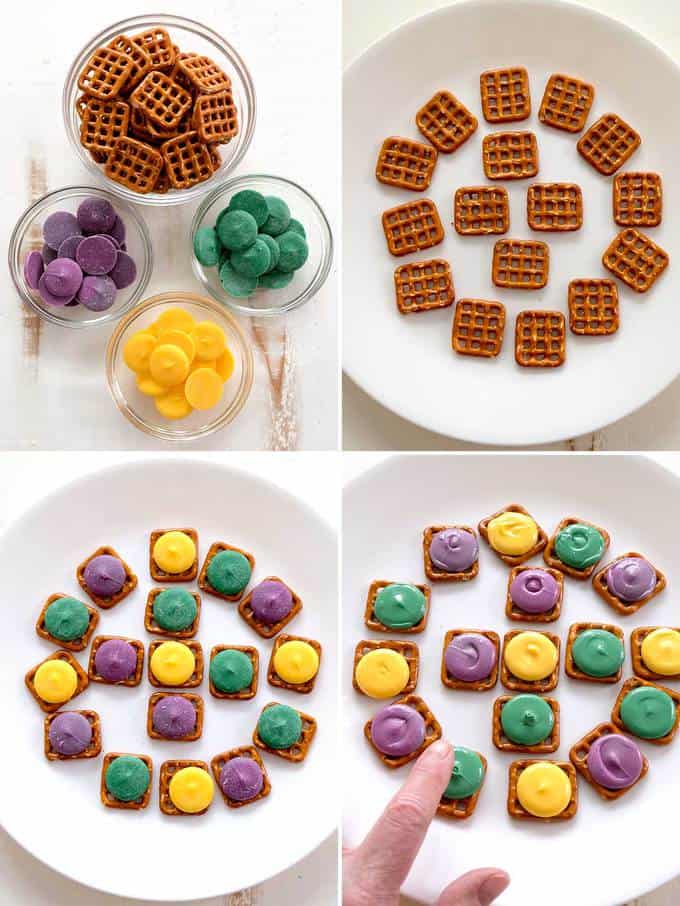 Once the Mardi Gras Pretzels were cooled, I added all of the ingredients in a large bowl. 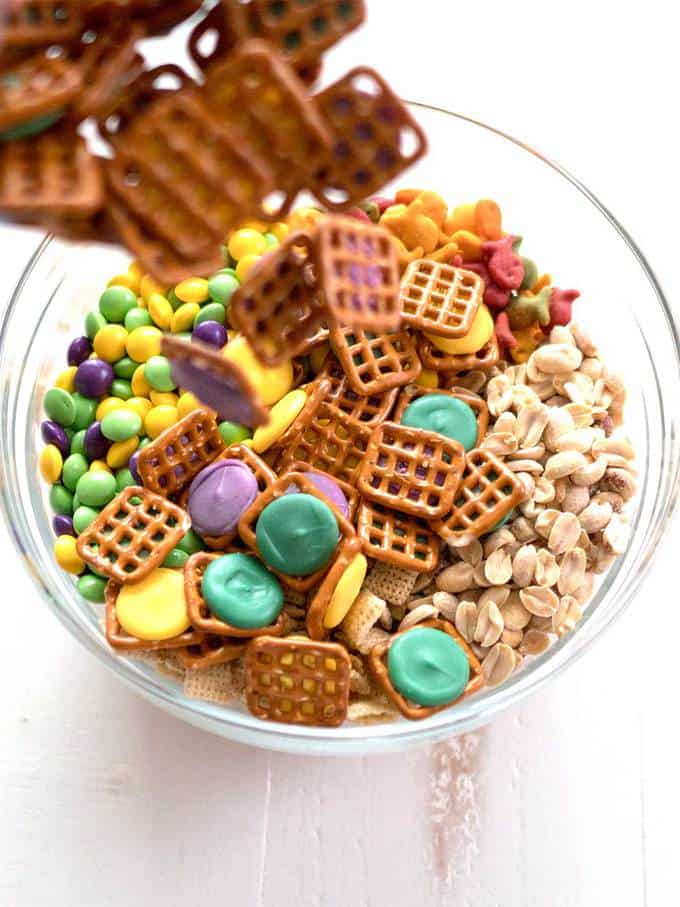 I gave the mixture a stir to ensure that everything was well distributed. That’s it – Mardi Gras Munch was ready! 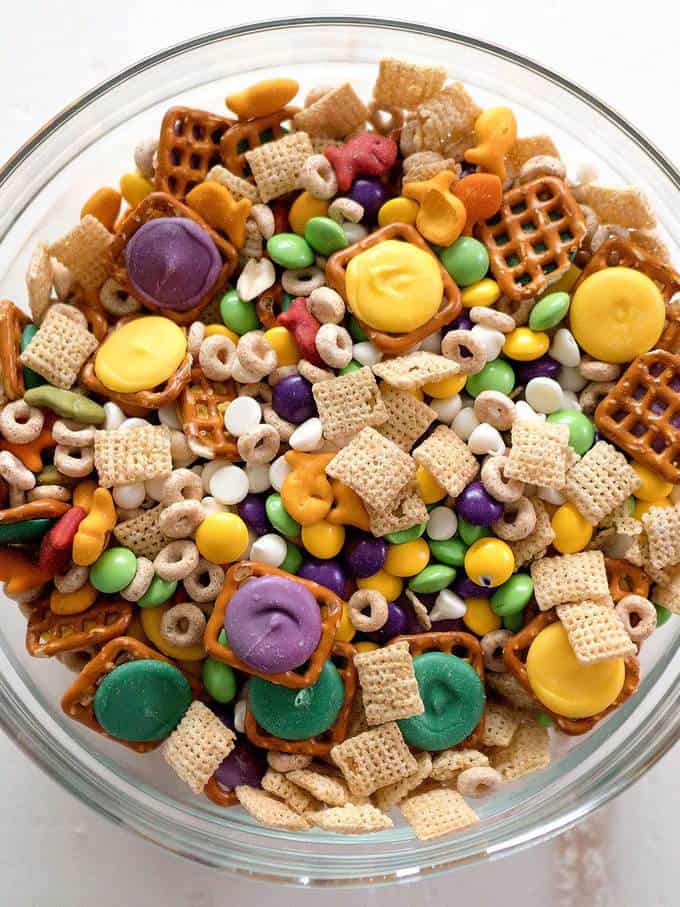 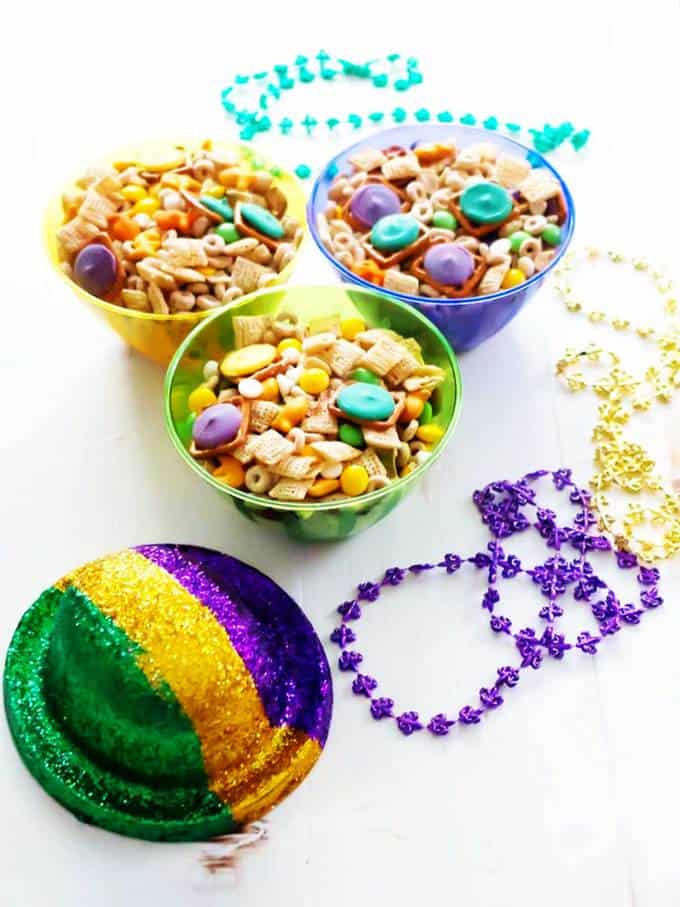 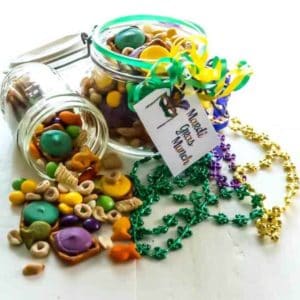 Laissez les bon temps rouler with Mardi Gras Munch! Mardi Gras this year is February 13, 2018 It is much earlier this year than it has been in the past giving you not so much time to whip up Mardi Gras treats. They're so simple to make and so delicious!
4.70 from 10 votes
Print Pin Rate
Course: Appetizer
Cuisine: Mardi Gras, New Orleans, Southern
Prep Time: 5 minutes
Total Time: 5 minutes
Servings: 8
Calories: 556kcal
Author: Chula King