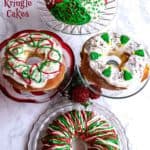 What better way to celebrate Christmas than with these incredible “Chris” Kringle Cakes? They are reminiscent of the Mardi Gras King Cake, but in mini form and decorated for Christmas – thus the “Chris”. As such, each one is a ring of twisted cinnamon roll dough topped with an amazing cream cheese icing. 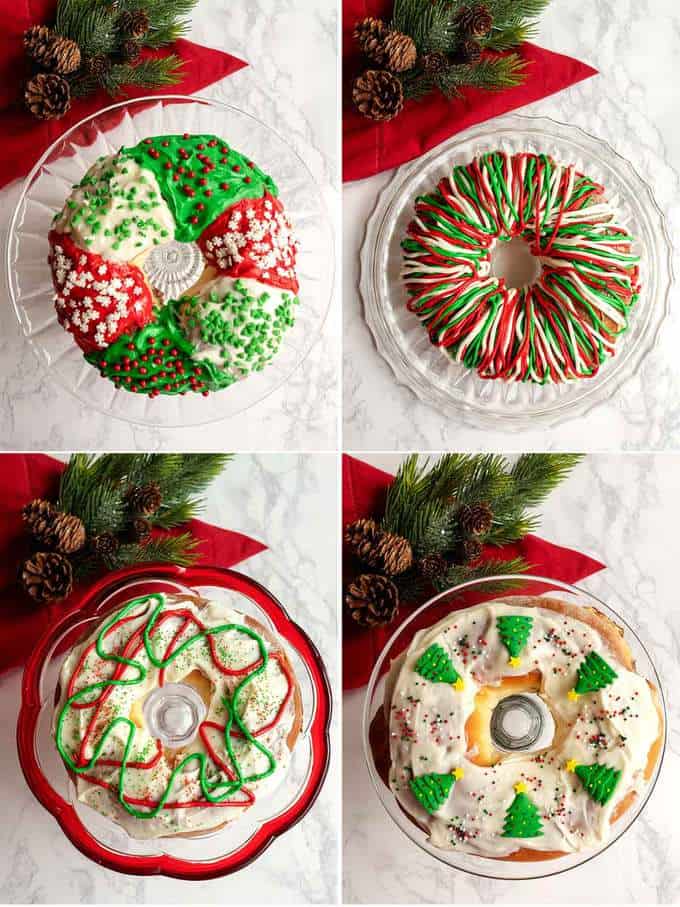 Susan named these “Chris” Kringle Cakes in honor of Christmas! Ultimately, she decorated two of the cakes, and I decorated the other two cakes.

Making the Dough for the “Chris” Kringle Cakes 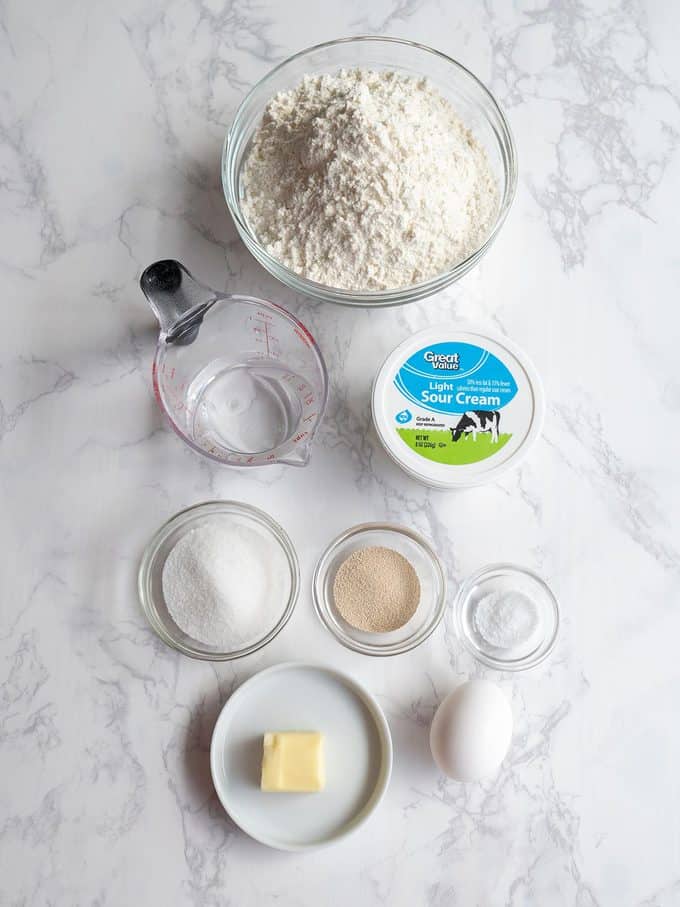 I added the ingredients in the order listed to the pan of my bread machine, and selected the dough cycle. 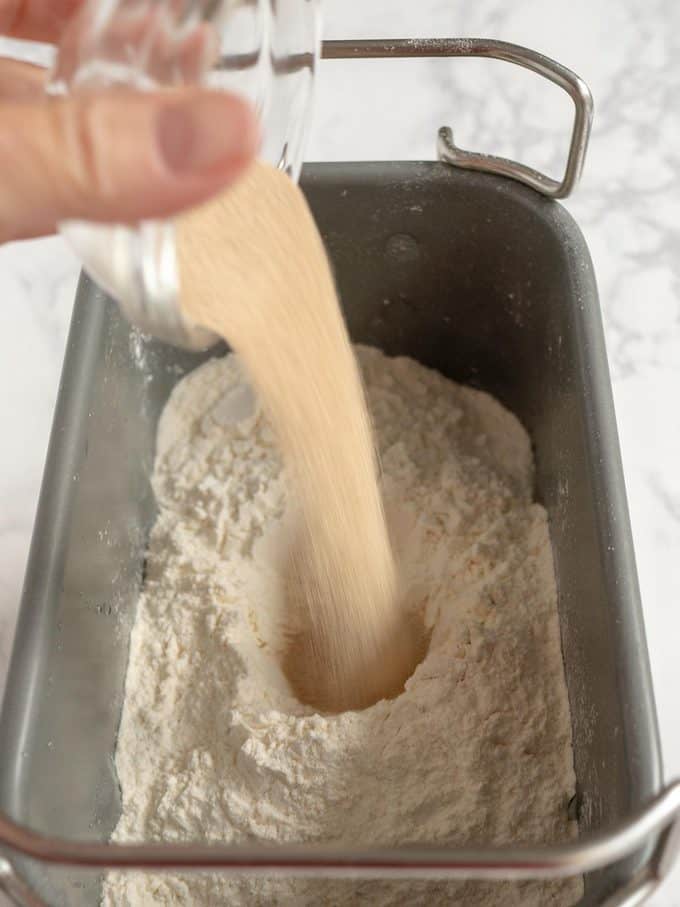 I decided to make the dough the night before making the cakes. Therefore, as soon as the kneading had finished, I removed the dough from the bread machine. I placed it in an oiled bowl, covered it in plastic wrap, and stuck it in the refrigerator. I’ve found that refrigerated dough is generally easier to work with than room temperature dough.

The next morning, the dough had risen nicely. I removed it from the refrigerator and placed it on a lightly floured piece of parchment paper. I ended up with 32 ounces of dough. Because I was making four “Chris” Kringle Cakes, I cut the dough into 4 pieces that were 8 ounces each.

I knew that I needed to roll the dough into a rectangle. Therefore, to make the job easier, I formed each piece into a log about 12-inches long. 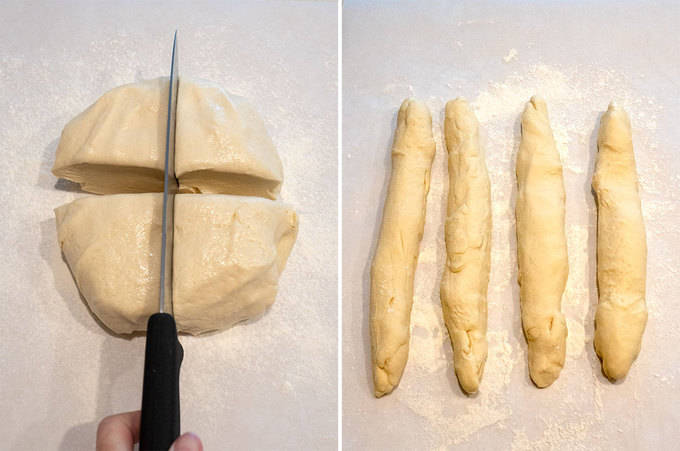 Before actually rolling the dough into rectangles, though, I made the two fillings:  Cream cheese mixed with confectioners’ sugar; and melted butter mixed with granulated sugar and ground cinnamon. 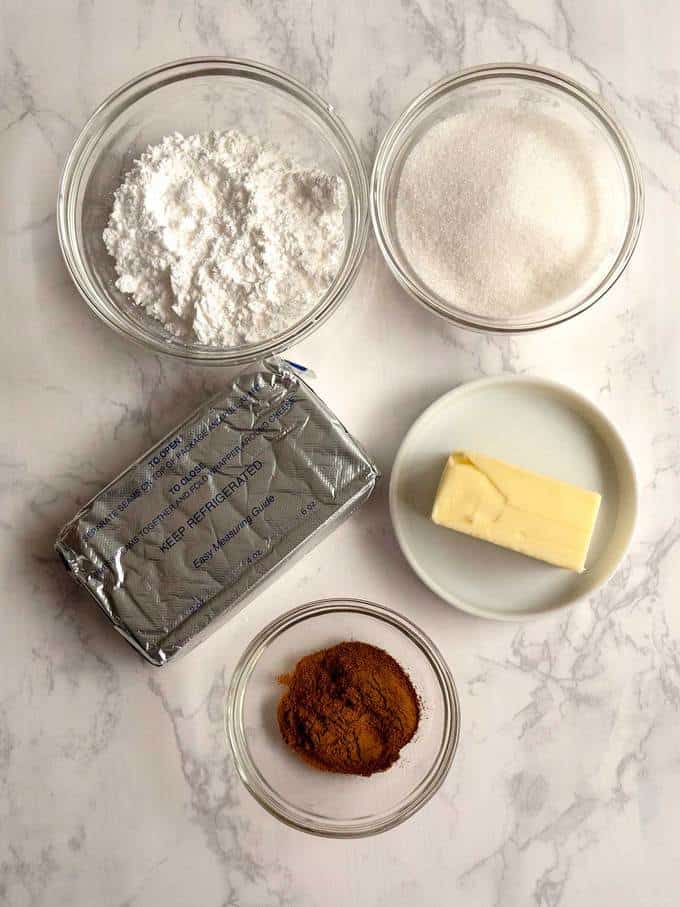 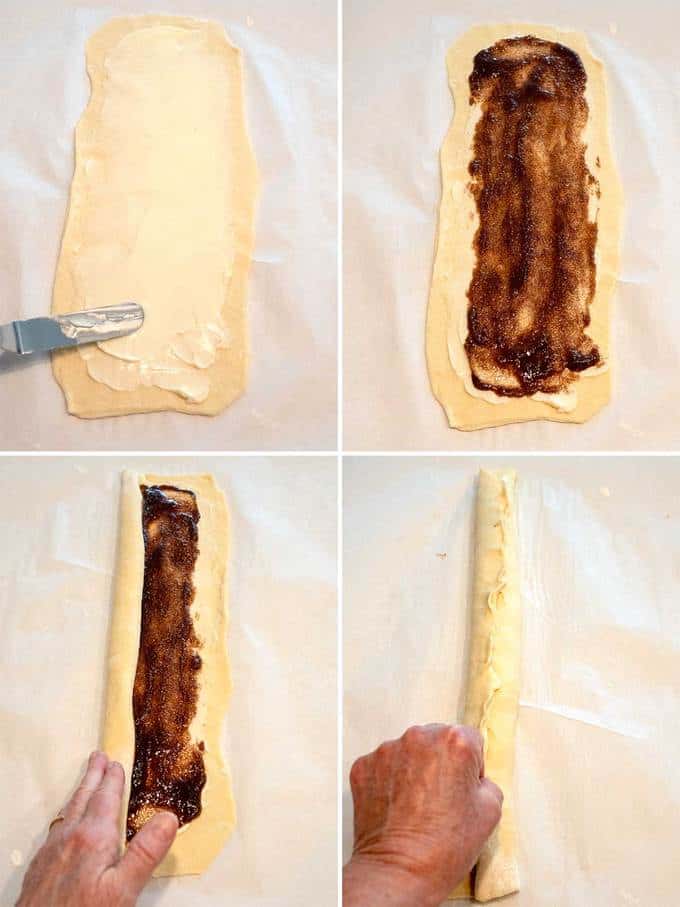 I formed the log into a circle, inserted one end into the other and pinched the pieces together. 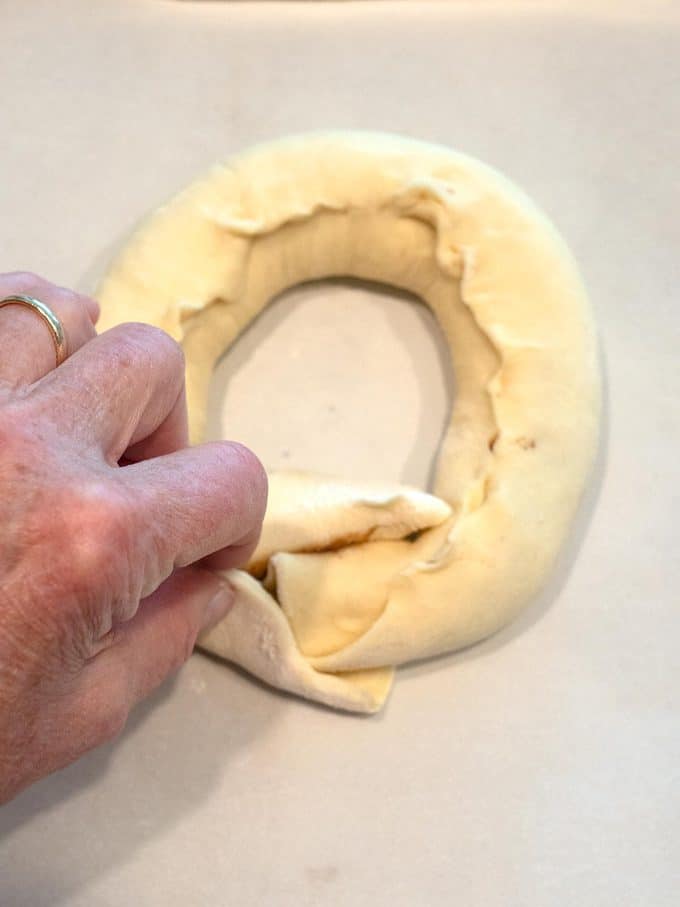 Then, I inverted the ring, seam side down on a parchment lined baking sheet. Finally, I placed a small round greased container into the center of the ring. The reason for doing this was to ensure that the ring didn’t close up as the dough rose. I repeated this process with the other three pieces of dough, placing two rings per baking sheet.

Once the four rings were finished, I covered the pans and let the dough rise for about 1 hour and 30 minutes. 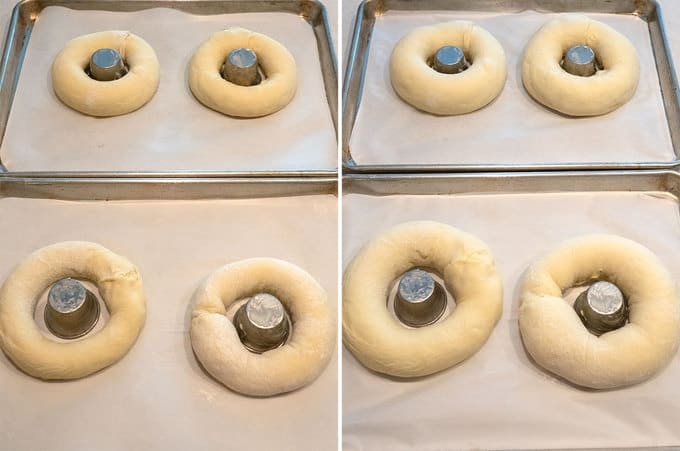 Into a preheated 350° F oven the “Chris” Kringle Cakes went for about 20 minutes, until they were golden brown.

While the cakes were cooking, I made the cream cheese icing by beating together cream cheese, unsalted butter, vanilla extract and confectioners’ sugar. I colored some of the icing red and some green using gel coloring. 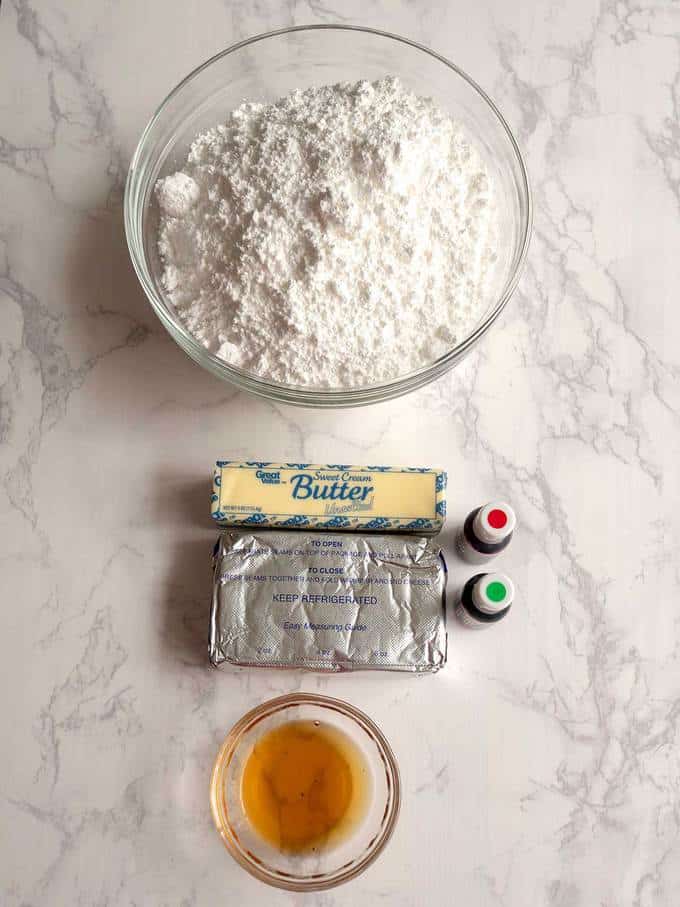 When the “Chris” Kringle Cakes came out of the oven, I let two of them cool for about 10 minutes before I iced them. After I had iced the cakes, I decorated them.

Susan let the other two cakes cool for about 30 minutes before she iced and decorated them.

We ended up with four amazing “Chris” Kringle Cakes. Each one was decorated differently. However, each one was like a large cinnamon roll with cream cheese icing. Yum! 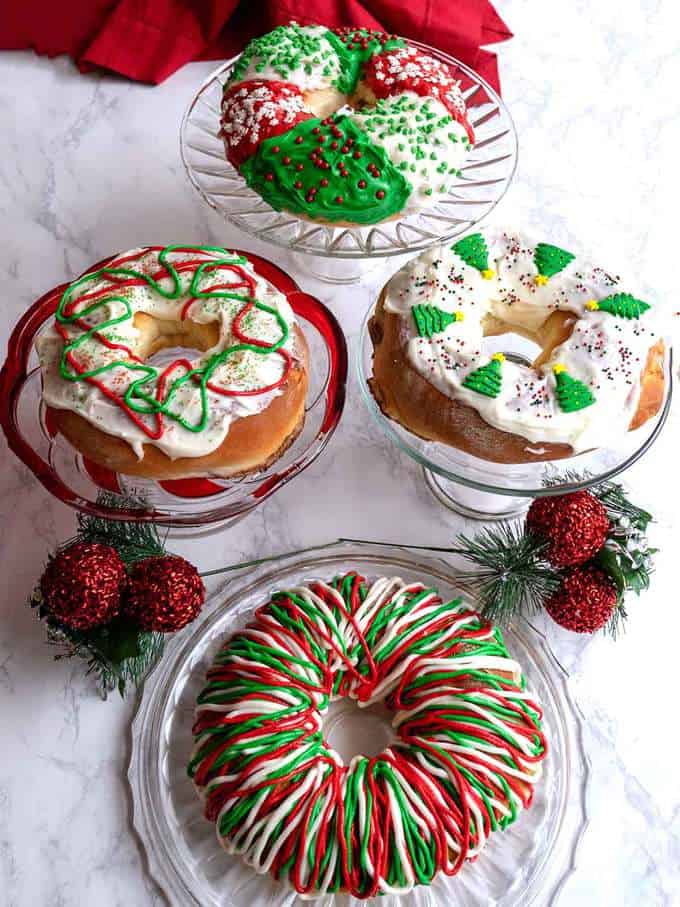 If you like this recipe, check out my Christmas King Cake. 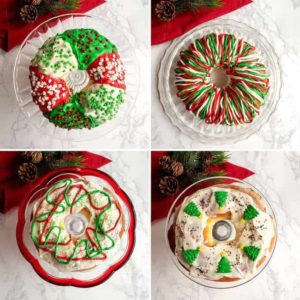 What better way to celebrate Christmas than with these incredible "Chris" Kringle Cakes? They are reminiscent of the Mardi Gras King Cake, but in mini form and decorated for Christmas - thus the "Chris". As such, each one is a ring of twisted cinnamon roll dough topped with an amazing cream cheese icing.
5 from 5 votes
Print Pin Rate
Course: Cakes, Christmas
Cuisine: American
Prep Time: 1 hour
Cook Time: 20 minutes
Total Time: 1 hour 20 minutes
Servings: 16 servings
Calories: 471kcal
Author: Chula King