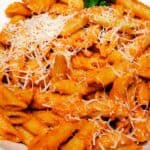 Penne Alla Vecchia Bettola is an Italian dish that roughly translates to Old Tavern Pasta. Sometimes referred to as Vodka pasta, this dish is the perfect blend of ingredients to produces a true restaurant quality meal.

My inspiration for this amazing dish was Ina Garten’s Nick and Toni’s Penne Alla Vecchia Bettola on foodnetwork.com.

What You’ll Need For This Recipe

The sauce uses ingredients that are somewhat typical of Italian tomato sauces.

How To Make The Sauce

The steps in making the awesome sauce are relatively minimal.

Next, I added the vodka and continued cooking the ingredients until the liquid was reduced by about half.

Then, I covered the Dutch oven and placed it into a preheated 375°F oven for 1 ½ hours.

After I reheated the tomato sauce, I added the cream and Parmesan cheese. Then, I stirred the mixture until the cream was well incorporated and the cheese was melted.

Finally, I added the cooked Penne and tossed it with the sauce.

I served the Penne Alla Vecchia Bettola with freshly baked Crusty French bread, a chilled Chardonnay, and some grated Parmesan cheese on top.

Can a different pasta than Penne be used in this recipe?

It’s really the sauce that makes this recipe amazing. Therefore, feel free to substitute Ziti, Rotini, Spaghetti or Linguini for the Penne.

How does adding vodka enhance the sauce?

You really can’t taste the vodka in the sauce. However, it does add a depth and richness to the sauce that would be missing if the vodka was eliminated.

Does the alcohol remain in the sauce?

The alcohol in the sauce is cooked off. Any remaining alcohol is negligible.

Is there a reasonable substitute for the vodka?

If desired, you can substitute white wine for the vodka. The taste, however, will be somewhat different. Also, it won’t be called Vodka Pasta!

Can the vodka be eliminated?

You can eliminate the vodka. The taste will be somewhat different though. Because of the other liquids in the sauce, there is no need to replace the vodka.

Can the sauce be made ahead of time?

Feel free to make the sauce ahead of time and store it covered in the refrigerator until ready to use.

As it true with many tomato-based pastas, the Penne Alla Vecchia Bettola or Vodka Pasta produces amazing leftovers.

What is the best type of vodka to use in this recipe?

You should use unflavored vodka in this recipe.

The Penne Alla Vecchia Bettola is one of the first recipes that I featured in Pudge Factor – February 15, 2012. Since then, I’ve made it a number of times with consistently amazing results. I decided to update the original post with updated photos and text. However, the original recipe remains unchanged. 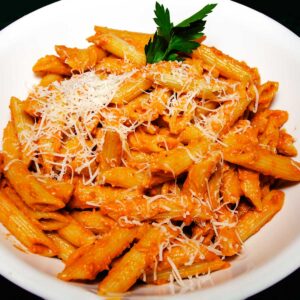