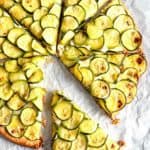 Three Cheese Zucchini Tart is easy to make, beautiful to behold, and delicious to taste! It’s made by spreading an awesome cream cheese and Parmesan cheese mixture on a simple no-yeast crust, sprinkling on some Mozzarella cheese, and layering thinly sliced zucchini. Three Cheese Zucchini Tart is perfect for a light dinner, or as an appetizer. It can be eaten hot, warm, or cold, and reheats beautifully. 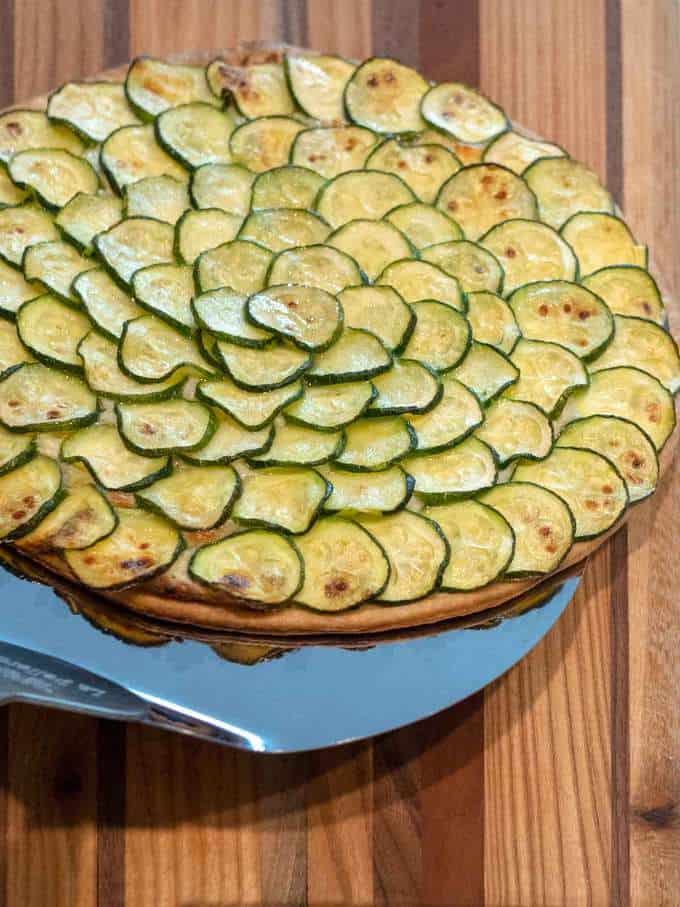 For other light and savory tart using summer’s bounty, you should try my Fresh Tomato Ricotta Tart in Puff Pastry, and the Vidalia Onion and Mushroom Quiche.

I used the following ingredients for this delicious tart: 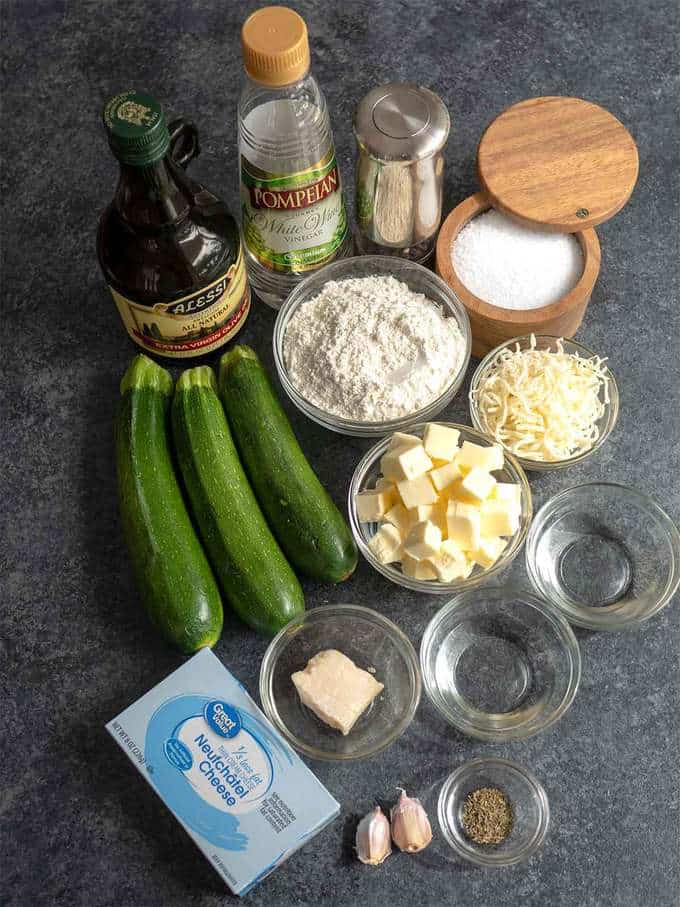 I added the flour and salt to my food processor fitted with a steel blade, and pulse processed it 4 or 5 times. Then, I added the cold butter pieces, and pulse processed it 10 or 12 times until the mixture was the size of peas. Next, I added the vinegar, water, and Vodka, and pulsed the mixture 5 or 6 times, just until it came together into a shaggy dough. The reason that I used vinegar and Vodka in the crust is that it helps to minimize the gluten formation. This results in a more tender and flaky crust. You can use water in place of the Vodka. However, I would not omit the vinegar.

I dumped the dough onto a floured surface, formed it into a disk, and wrapped it in plastic wrap. Then, I refrigerated the dough for 30 minutes while I moved on to the zucchini. 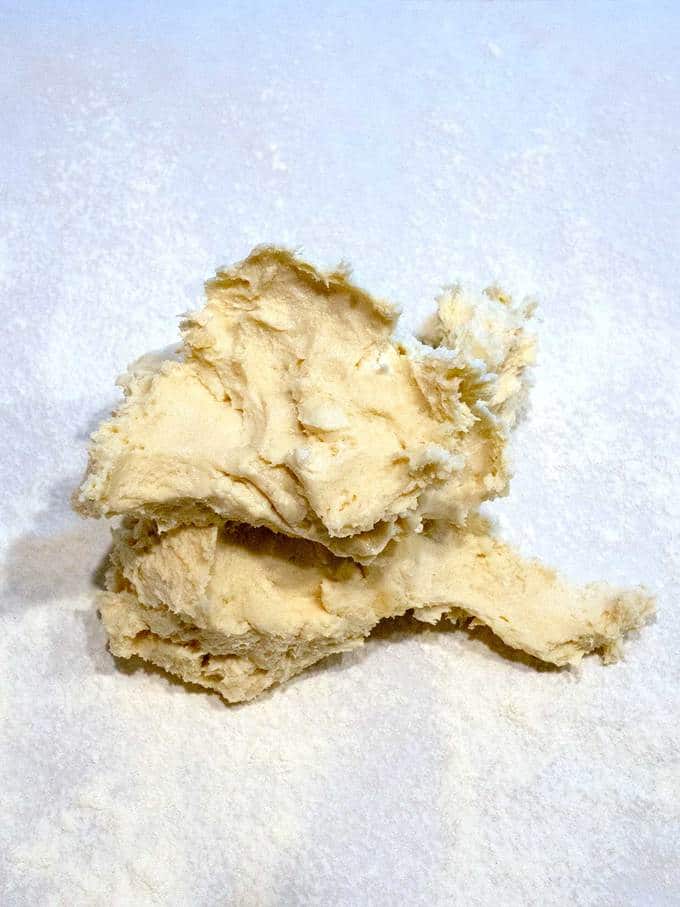 I used the 3 mm slicing disk on my food processor to cut the zucchini into ⅛-inch slices. Then, I added the zucchini to a colander set over a plate, and tossed it with 1 teaspoon of salt. I let the zucchini sit for 30 minutes, and was amazed at the amount of liquid that puddled in the plate. 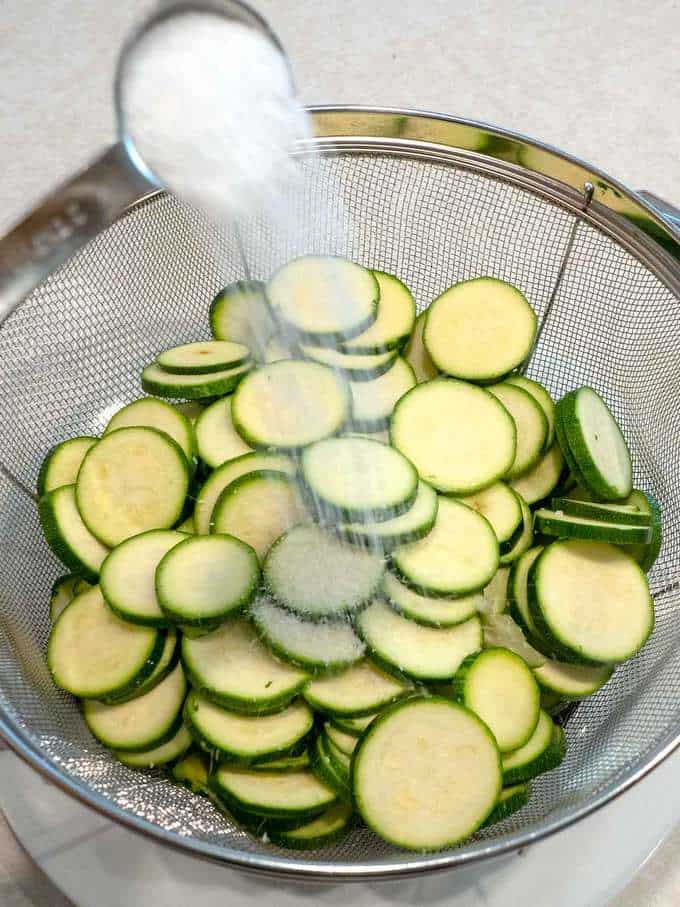 One of the keys to this tart is removing as much liquid as possible from the zucchini. Therefore, after 30 minutes, I spread the zucchini out in a single layer on doubled paper towels, and blotted it dry with an additional paper towel. Once I had done that, I transferred the zucchini to a bowl, and tossed it with a tablespoon of olive oil. 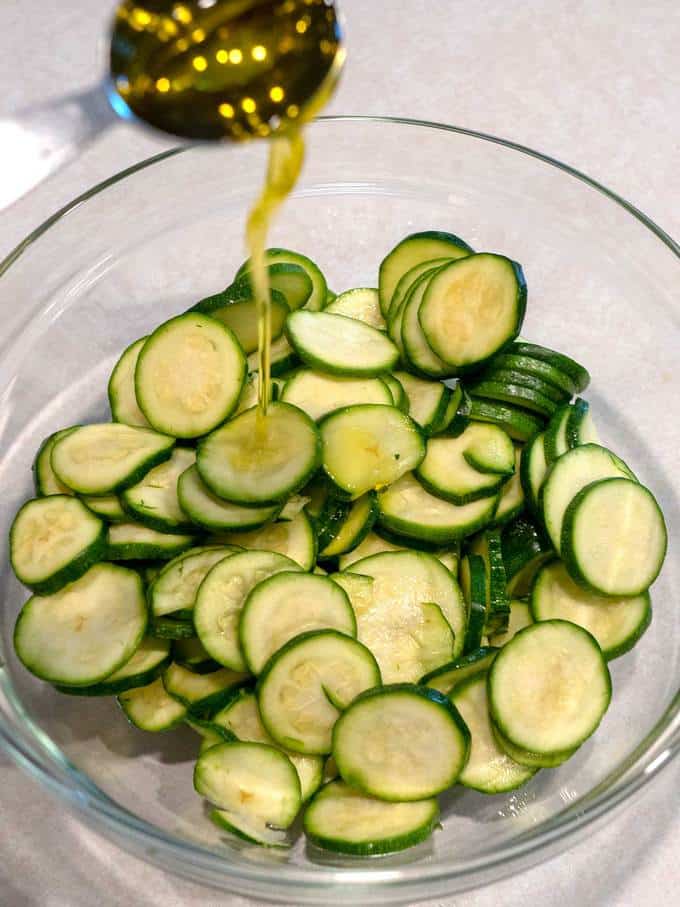 For the cheese filling, I added the cream cheese, garlic, thyme, pepper, and grated Parmesan cheese to a bowl. Then, I beat the mixture with my electric mixer until it was well combined. I thought that it was a bit too thick, so I beat in tablespoon of heavy cream to thin the filling out. I didn’t add the Mozzarella cheese because I was going to sprinkle it on top of the cheese filling once I built the tart. 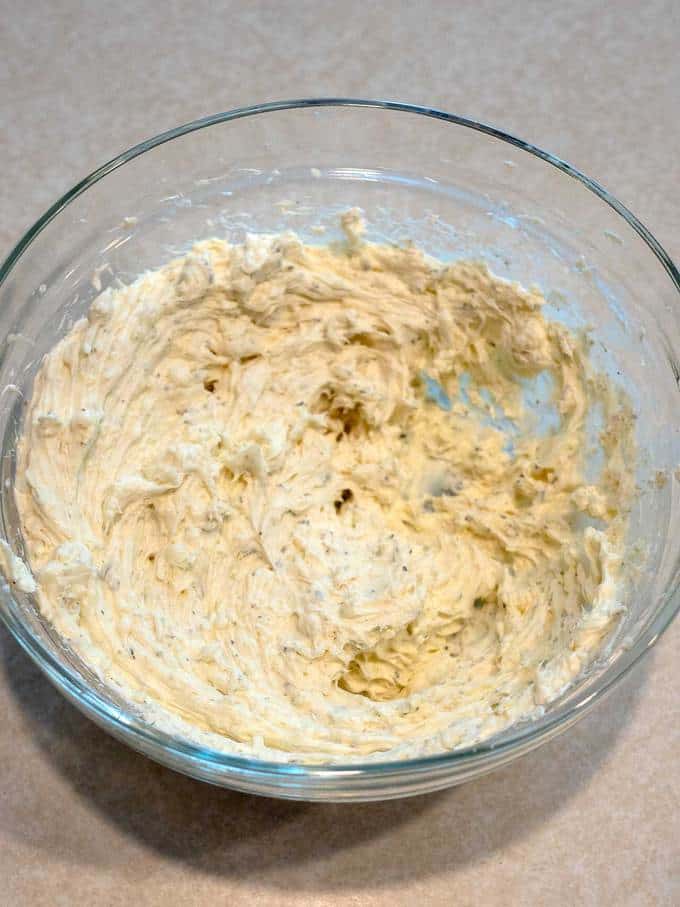 After I removed the tart dough from the refrigerator, I placed it on a silicon mat, covered it with a piece of parchment paper, and rolled it out to an 11 or 12-inch circle. My rolling skills are not that great, so I trimmed the dough into a perfect circle using a lid that happened to be the perfect size. I could have used a large plate as a guide or trimmed the crust with a knife. 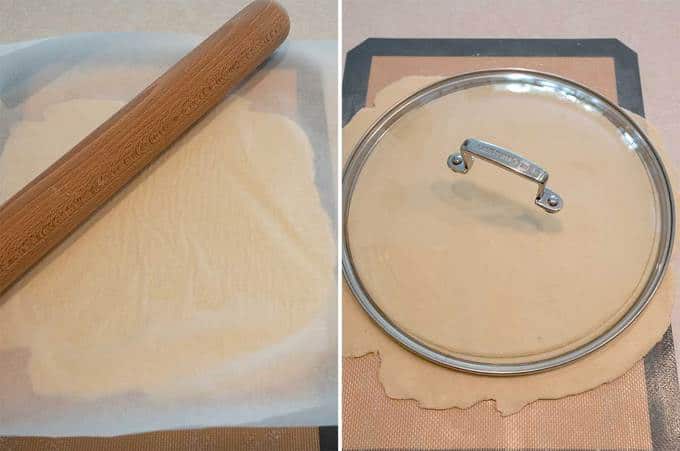 In the past when I’ve made this tart, I would roll the dough on a floured piece of parchment paper. Once I had trimmed it, I would carefully transfer it to the silicon lined baking sheet. This was not only messy, but also somewhat difficult since the dough was somewhat delicate. Now, I roll and trim it directly on the silicon – no mess, no fuss – a brilliant trick if I do say so myself!

I spread the cheese filling on the pastry, leaving a ½-inch border. Then, I sprinkled on the Mozzarella cheese. Next, I added the zucchini slices in tightly overlapping circles, starting ½-inch from the edge of the pastry. I continued the overlapping circles of zucchini until the whole tart was covered. Finally, I drizzled the tart with the remaining tablespoon of olive oil. 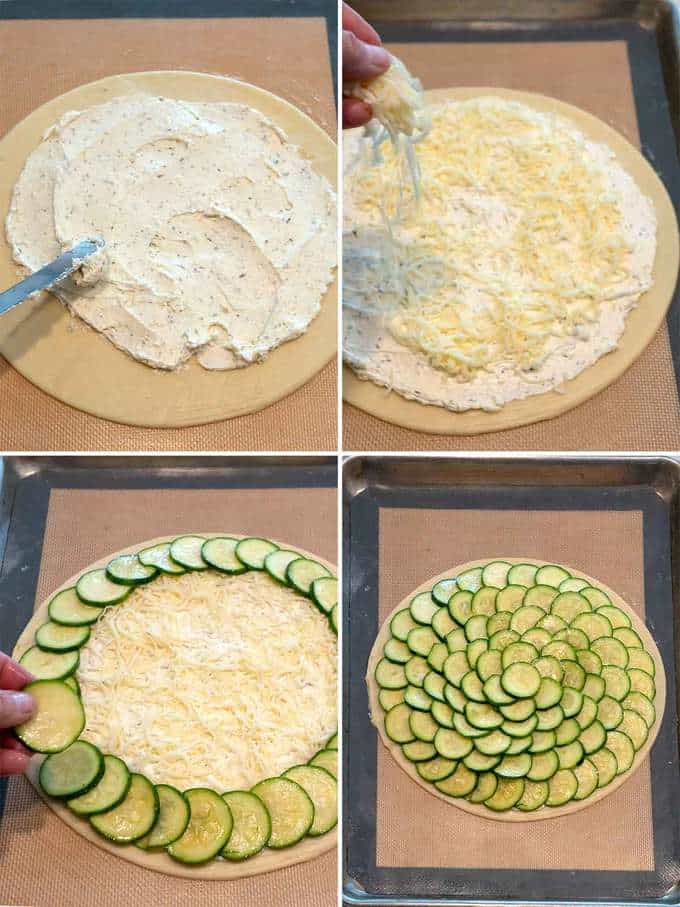 I popped the Three Cheese Zucchini Tart into a preheated 400° F oven for about 45 minutes. After 45 minutes, the crust was golden brown, and the zucchini was perfectly cooked. I removed the tart from the oven and cut it into 8 wedges.

The Three Cheese Zucchini Tart was absolutely delicious. The crust was buttery and flaky, and the cheese filling had a delicate taste that perfectly complimented the zucchini. Yum! 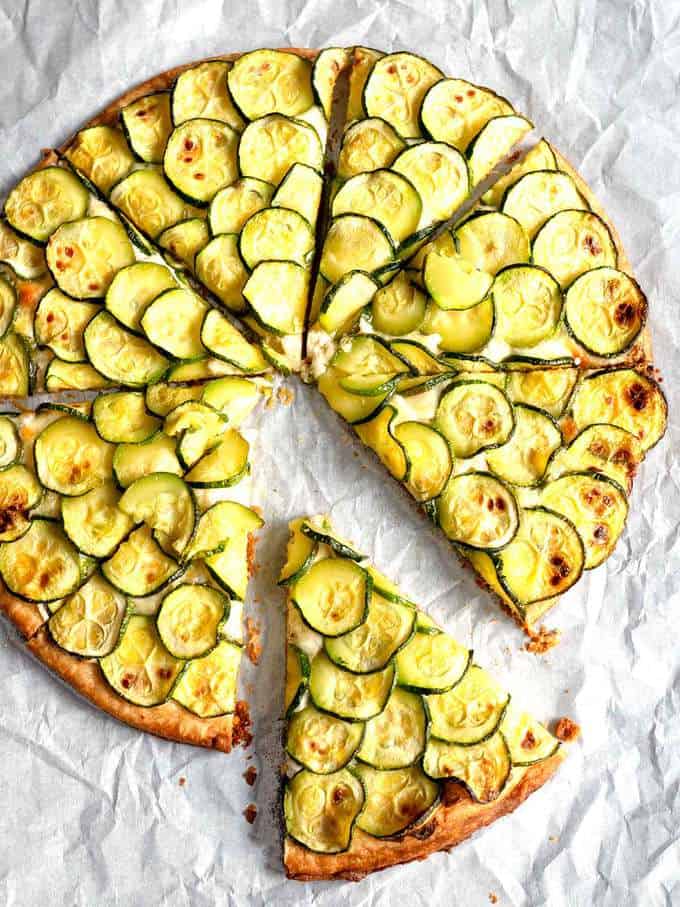 This is a repost of the Three Cheese Zucchini Tart originally posted on June 20, 2018. I’ve slightly updated the text and have added a short video. 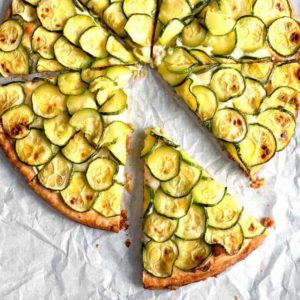