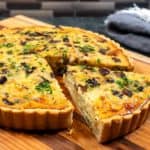 Vidalia Onion and Mushroom Quiche is perfect for brunch, lunch or a light dinner. This savory quiche combines the flavors of the sweet Vidalia onion with earthy mushrooms to produce an amazing dish. It is complimented by nutty Gruyère cheese and baked in a tender and flaky pâte brisée crust. Leftovers, if any, can be reheated the next day! 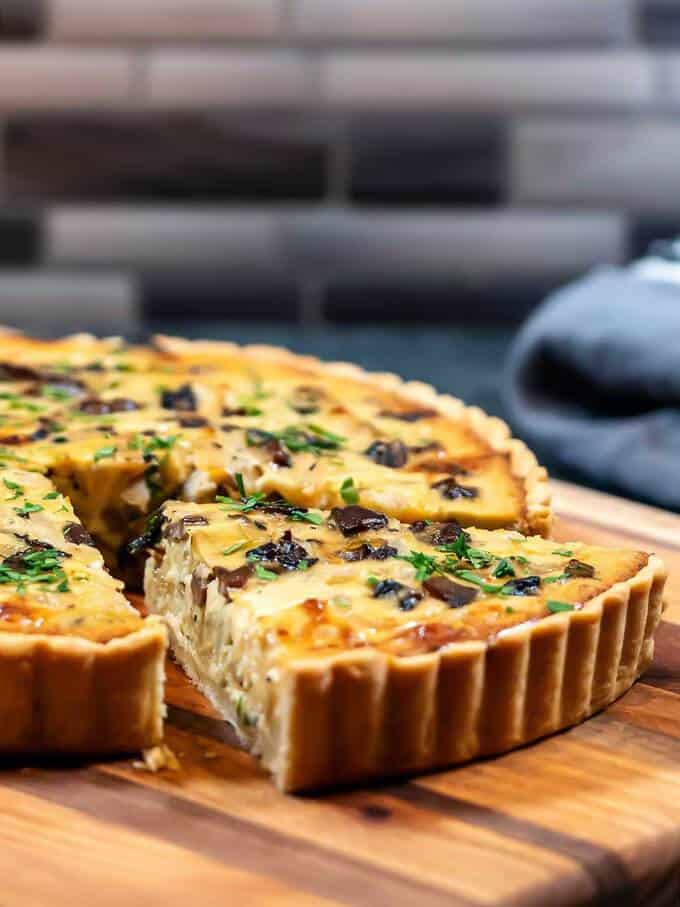 For other delicious quiche like recipes, you should try Ham and Gruyère Quiche, Tomato Florentine Quiche and Cheese and Onion Pie. 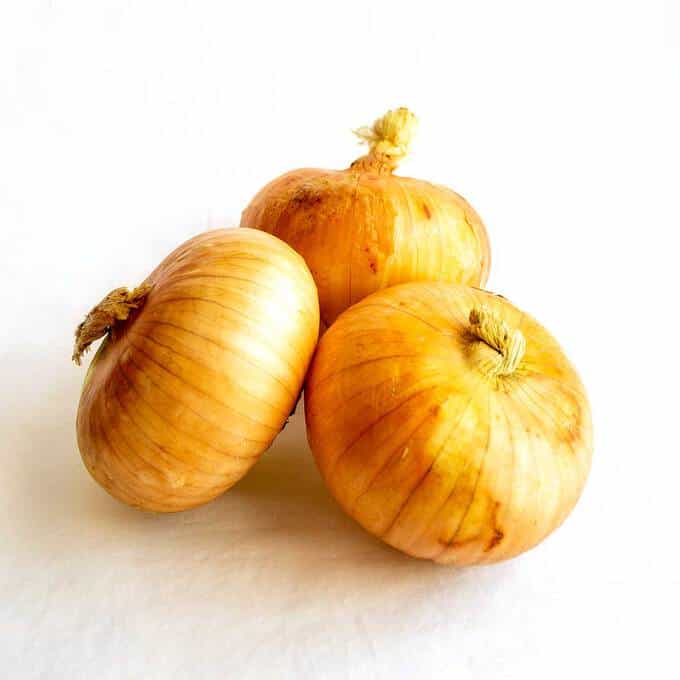 Vidalia onions first came to light in Toombs County, Georgia in the spring of 1931. A farmer named Mose Coleman discovered that the onions that he planted were sweet as opposed to being pungent.

The actual onion variety originated in Texas and is grown in many areas around the country. However, the sweetness of the Vidalia onion is the result of the unique combination of low sulphur sandy soil and climate in and around Vidalia, Georgia. Because of this, Vidalia onions have significantly lower levels of the chemical pyruvic acid which is responsible for the onion’s pungent bite and their tearing factor.

Vidalia onions quickly became so popular that by the 1970’s they were the major crop in the area. Their legal status was proclaimed in 1986 by the Georgia legislature who limited their production to 20 counties surrounding Vidalia, Georgia. Also in 1986, the Georgia Department of Agriculture was given the power of the brand name of “Vidalia”. Then in 1989, federal protection similar to protection granted to the Florida citrus crops was granted to the Vidalia onion. In 1990, the Georgia legislature declared the Vidalia Onion as the official State vegetable and successfully trademarked the Vidalia onion in 1992.

Vidalia onions have been deemed to be “the world’s sweetest onion.” By law, onions cannot be designated as Vidalia onions unless they are grown in the 20 county area surrounding Vidalia and confirm to strict guidelines. 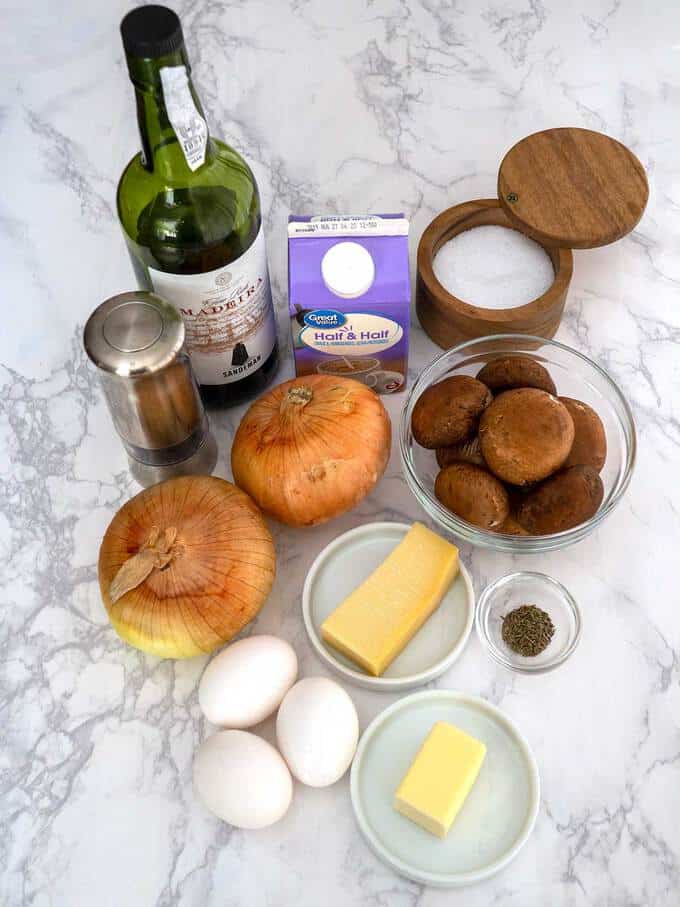 What if you want to make this delicious quiche, but don’t have the specific ingredients? You can make the following substitutions without too much of a  problem:

Pâte brisée is my go-to crust for quiches. The reasons are (1) the food processor does most of the work; (2) it doesn’t require rolling out; and (3) it’s amazingly tender and flaky.

I started by adding the flour, salt and sugar to my food processor fitted with a steel blade. Then, I pulse processed the ingredients 4 or 5 times to ensure that everything was well incorporated. Next, I added the butter and Crisco that I had cut into 1-inch pieces. I pulse processed the ingredients 8 or 9 times until the mixture resembled a coarse meal. After that, I added the ice water and pulsed the mixture several times until it came together. 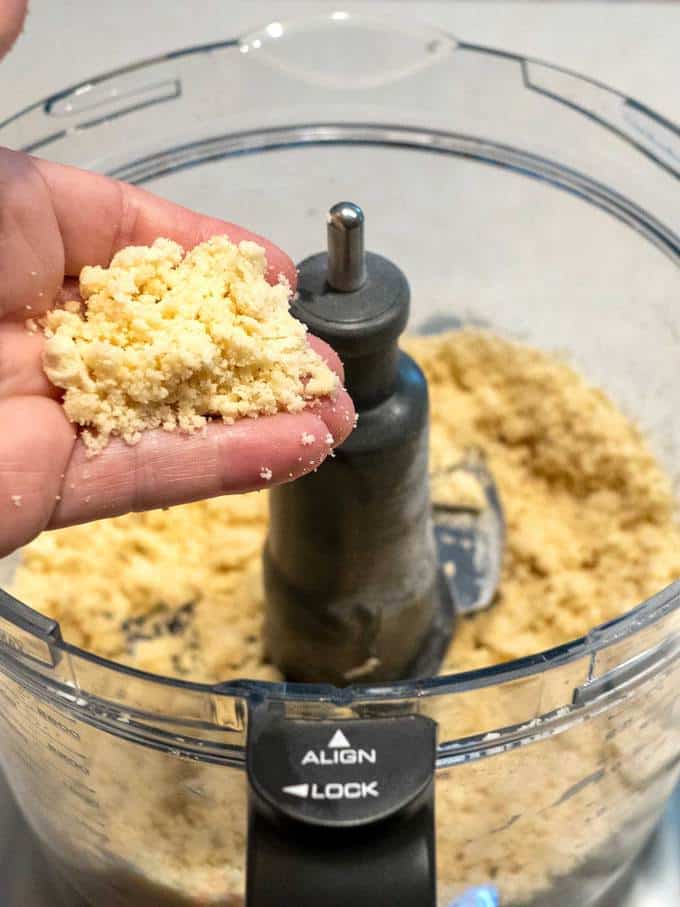 I dumped the dough into a 9-inch quiche pan with a removable bottom. Then, I pinched off a piece, rolled it into a cylinder and pressed it against the sides. I repeated this all the way around the sides of the quiche pan. 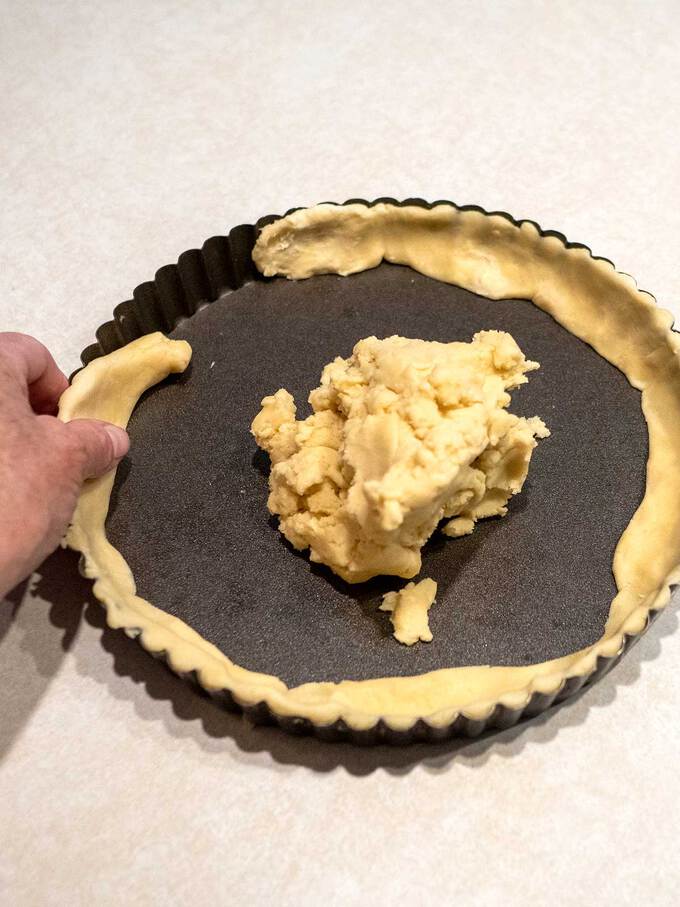 Once I had gone all the way around the quiche pan, I gently pressed the remainder of the dough onto the bottom of the quiche pan. Then, I covered the crust with plastic wrap, and used a straight-sided measuring cup to smooth it out. I find this so much easier than rolling the dough for a crust! 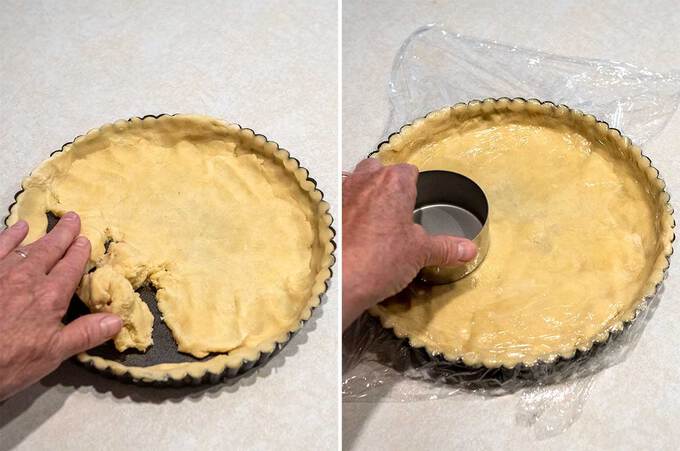 Once the crust was nicely smoothed out, I put it in the freezer for at least 20 minutes.

Cooking the Vidalia Onions for the Quiche

I started by cutting the Vidalia onions in half through the root end and peeling them. Then, I sliced them crosswise into ¼-inch slices. Next, I added the onions to melted butter in a 12-inch skillet set over medium heat. I added the thyme, salt, and pepper, and gave the onions a stir. After that, I placed a piece of paper towel over the top of the skillet and covered it with the lid. 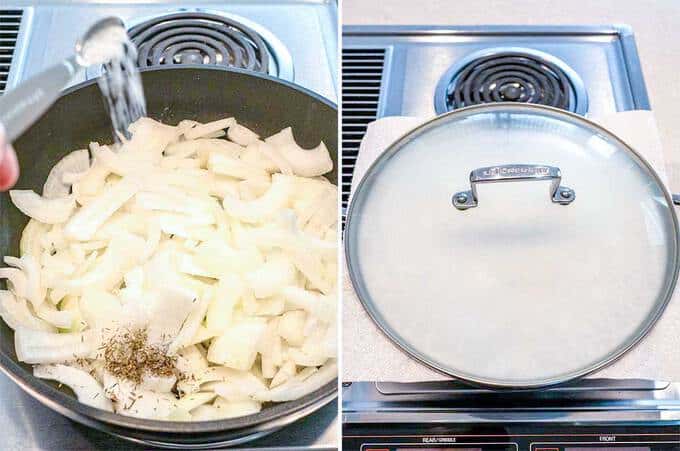 Covering the pan with a paper towel is a trick that I learned years ago. As the onions cook, a lot of condensation tends to form on the underside of the lid. The paper towel allows the condensation to form, but blocks it from dropping back down into the pan! This aids significantly in removing excess moisture from the onions so that they can cook properly!

After 10 minutes, I removed the lid and gave the onions a good stir. I wiped the condensation from the lid, placed a clean paper towel over the top of the pan and returned the lid. I let the onions cook covered over medium heat for an additional 10 minutes. After 20 minutes of cooking, all of the excess moisture in the onions had evaporated. The onions were lightly caramelized and perfectly cooked. I uncovered the pan and removed it from the heat. Then, I transferred the cooked onions to a bowl to cool. 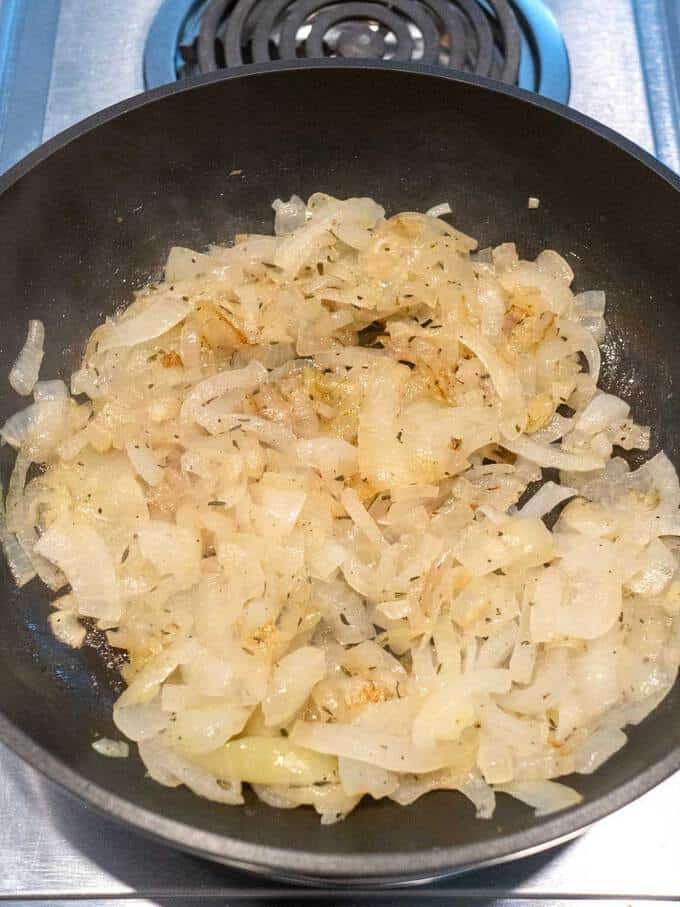 I added some additional butter to the same skillet that I used for the onions. After the butter melted, I added the roughly chopped mushrooms. I increased the heat to medium high and cooked the mushrooms until most of the liquid had evaporated. This took several minutes. Then, I added the Madeira and continued cooking the mushrooms over medium high heat until all of the liquid had evaporated. This took several additional minutes. I transferred the mushrooms to the bowl with the onions to allow them to cool. 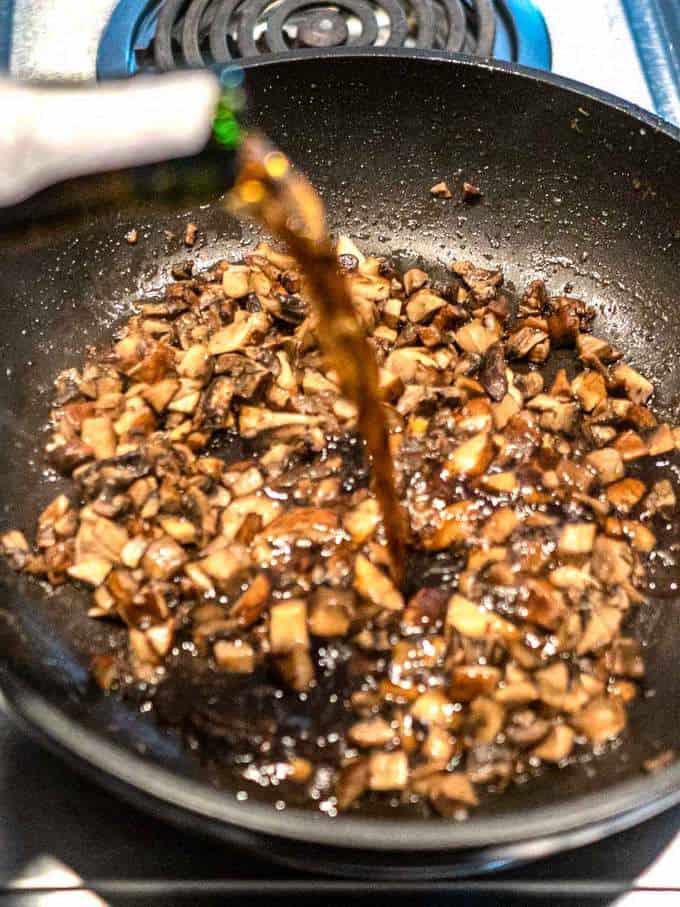 The first thing that I did was to pierce the frozen crust all over with a fork. Then, I placed a crumpled piece of parchment paper over the crust and pressed it to conform to the shape. Next, I filled the parchment paper with dried beans. I learned this trick from a Martha Stewart episode some time back! 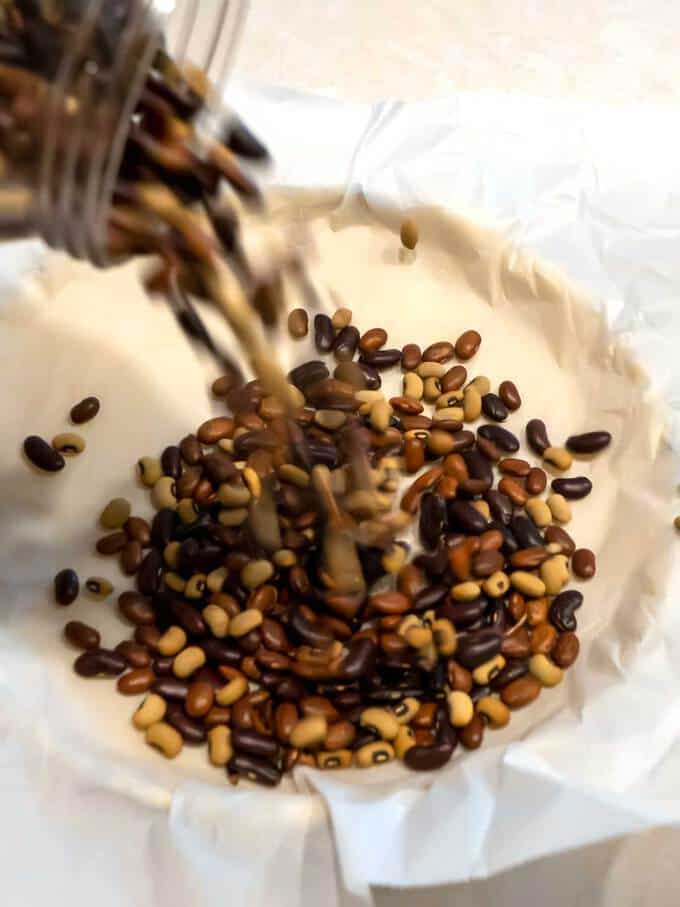 I popped the prepared crust into a preheated 400° F oven for 25 minutes. After 25 minutes, I removed the parchment paper and dried beans and returned the crust to the oven for an additional 10 minutes.

While the crust was baking, I whisked together the eggs and the half and half. Then, I added the egg mixture and shredded Gruyère cheese to the onions and mushrooms and stirred everything together. 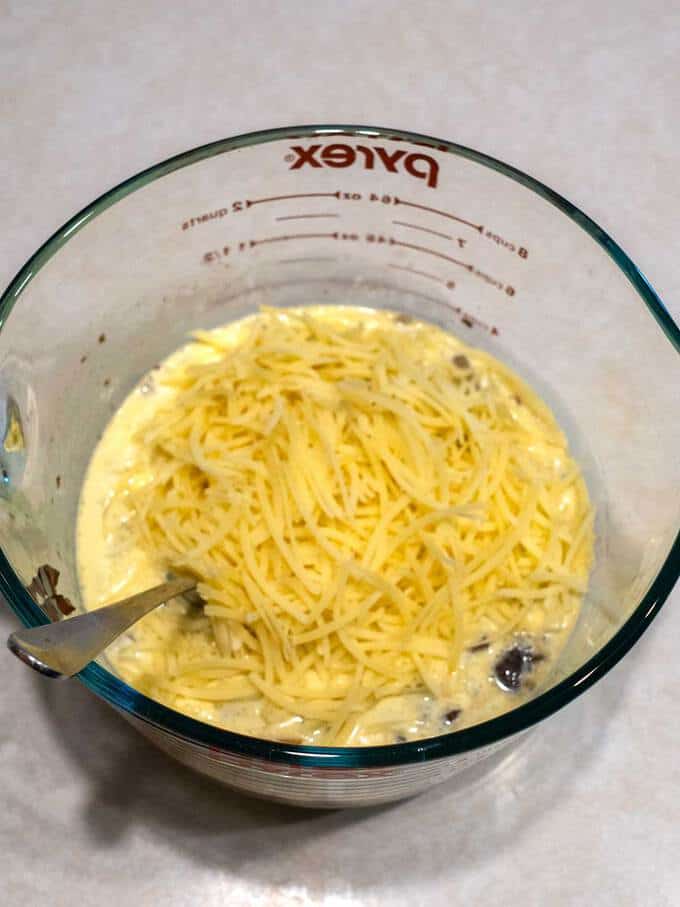 I removed the crust from the oven and reduced the heat to 375°F. Every now and then, the crust will develop small cracks when it’s been cooked. When this happens, I brush some of the egg/milk mixture from the filling on the crack while the crust is still hot. This acts like a glue to completely fill in the crack and prevent the quiche from leaking! 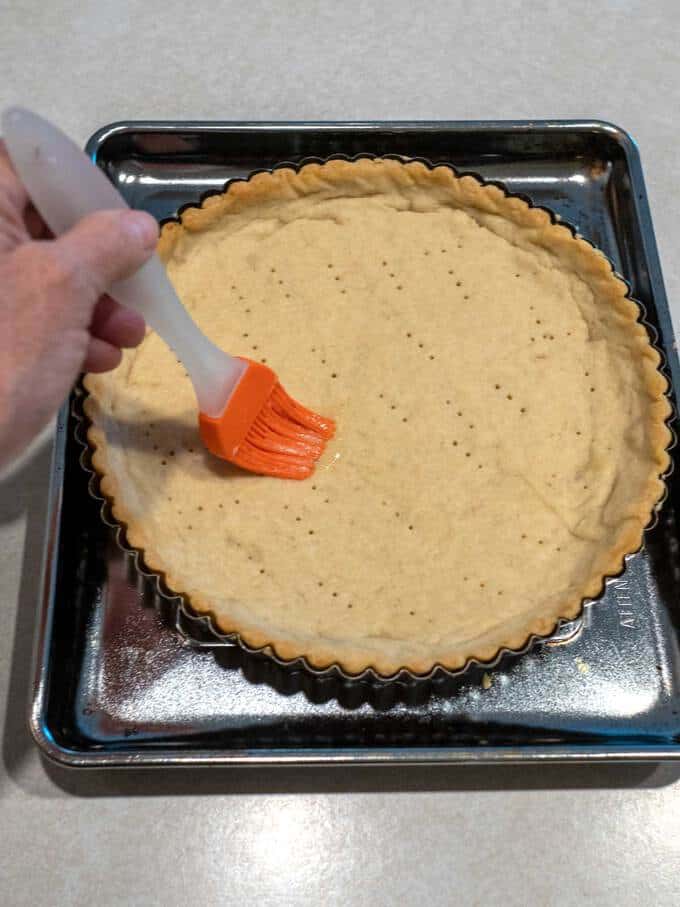 I poured the Vidalia Onion and Mushroom Quiche mixture into the prepared crust. Then, I baked the quiche in a preheated 375°F oven for 25 minutes until it was perfectly set. I removed the quiche from the oven, and placed it on top of a small inverted bowl. This allowed the sides of the quiche pan to drop away. 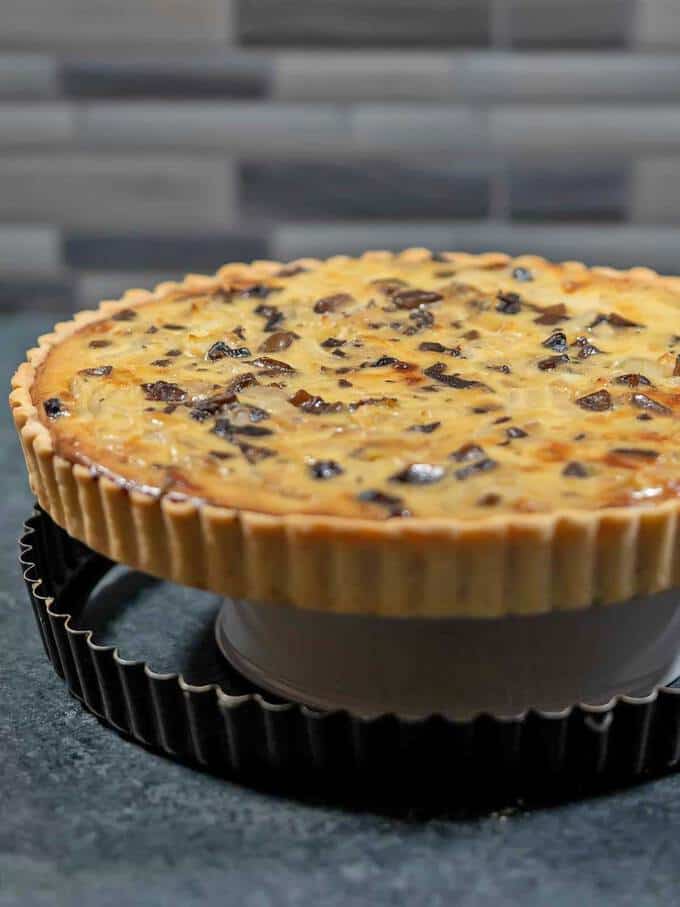 After letting the Vidalia Onion and Mushroom Quiche cool for about 10 minutes, I cut it into wedges and served it. To say that it was amazing was an understatement! The crust was tender and flaky, and the combination of the Vidalia onions and mushrooms was out of this world. The Master Taste Tester proclaimed it perfect and said that he didn’t see any way that the quiche could be improved upon. The ultimate compliment from the Taste Tester. Yum! 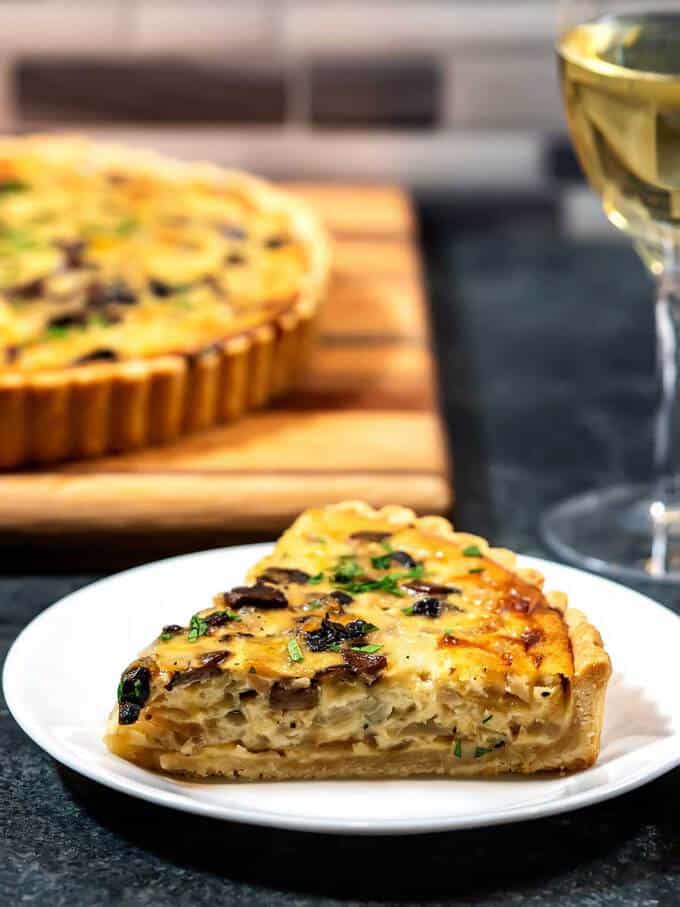 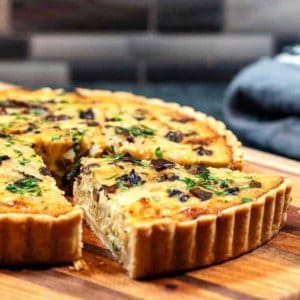 Vidalia Onion and Mushroom Quiche is perfect for brunch, lunch or a light dinner. This savory quiche combines the flavors of the sweet Vidalia onion with earthy mushrooms to produce an amazing dish. It is complimented by nutty Gruyère cheese and baked in a tender and flaky pâte brisée crust. Leftovers, if any, can be reheated the next day!
5 from 6 votes
Print Pin Rate
Course: Brunch, Main Course
Cuisine: French
Prep Time: 20 minutes
Cook Time: 1 hour 15 minutes
Servings: 6 servings
Calories: 527kcal
Author: Chula King