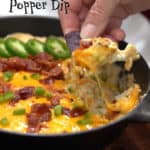 Bacon Jalapeño Popper Dip is the perfect appetizer for the busy holiday season and ultimate holiday feast. It’s creamy and cheesy, and full of bacon and jalapeño peppers. Bacon Jalapeno Popper Dip is easy to put together, can be made ahead of time and will likely be the first appetizer to disappear. 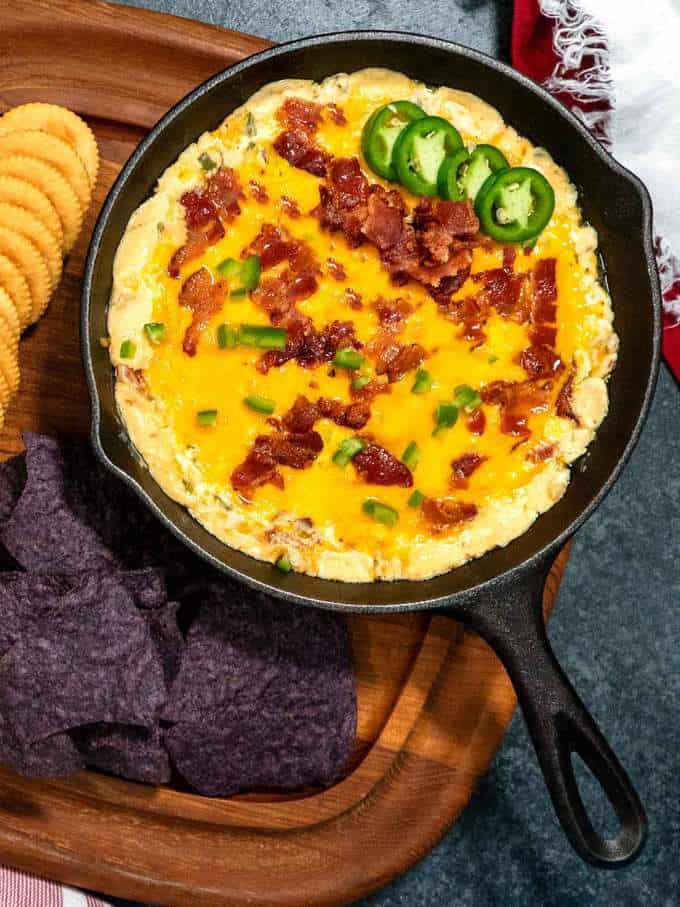 What is a Jalapeño Popper Anyway?

Whatever approach one uses, the result is a tasty morsel with an awesome blend of flavors.

Bacon Jalapeño Popper Dip has the same delicious blend of flavors as its cousin – the Jalapeño Popper. However, it’s so much easier to put together and always receives rave reviews.

I used the following ingredients for this amazing dip: Low fat cream cheese, low fat sour cream, fresh jalapeño peppers, cheddar cheese, sweet corn and crumbled bacon. Initially, I was going to sprinkle crushed Ritz Crackers on top, but forgot. I think that the dip would be equally good with or without the crushed Ritz Crackers. 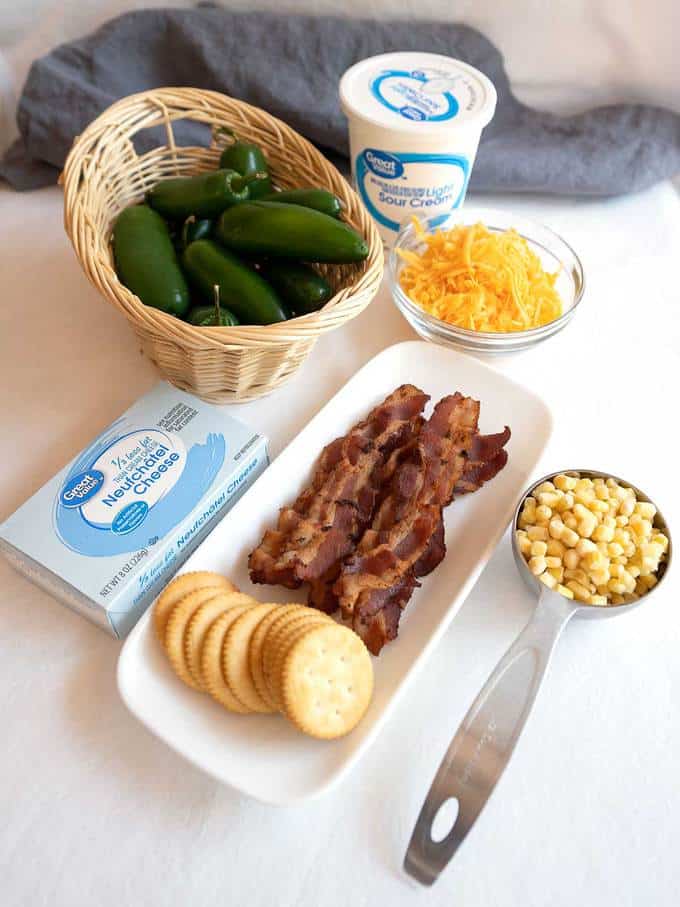 The first thing that I did was to prepare the jalapeño peppers, which was the most time consuming part of making the dip. I started by removing the seeds and the membranes where most of the heat resides. I’m not a fan of too much heat. However, the first thing that the Master Taster said was that the dip needed more heat. Therefore, it’s a personal preference in terms of how much of the seeds and membranes that you remove.

Once I had removed the seeds and membranes, I chopped the jalapeño peppers into small pieces.

Instead of bothering with the cleaning and chopping of the jalapeño peppers, I could have used jarred peppers. If I had gone this route, I would have reduced the amount of peppers by about a third.

Once the jalapeño peppers had been prepared, the actual making of the dip was a breeze. Basically, I added the cream cheese, sour cream, jalapeño peppers, shredded cheddar cheese, corn kernels and crumbled bacon to a medium-sized bowl. 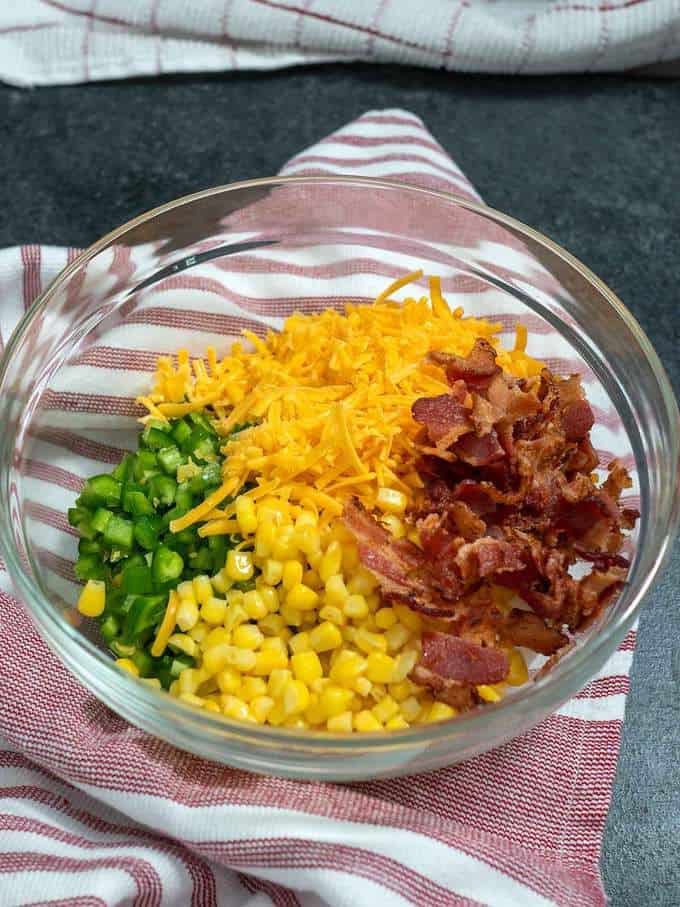 Then, I mixed everything together with my electric mixer. Once the ingredients were combined, I transferred the mixture to an 8-inch cast-iron pan. I evened out the mixture with a silicon spatula. Then, I topped dip mixture with some more shredded cheese and crumbled bacon. 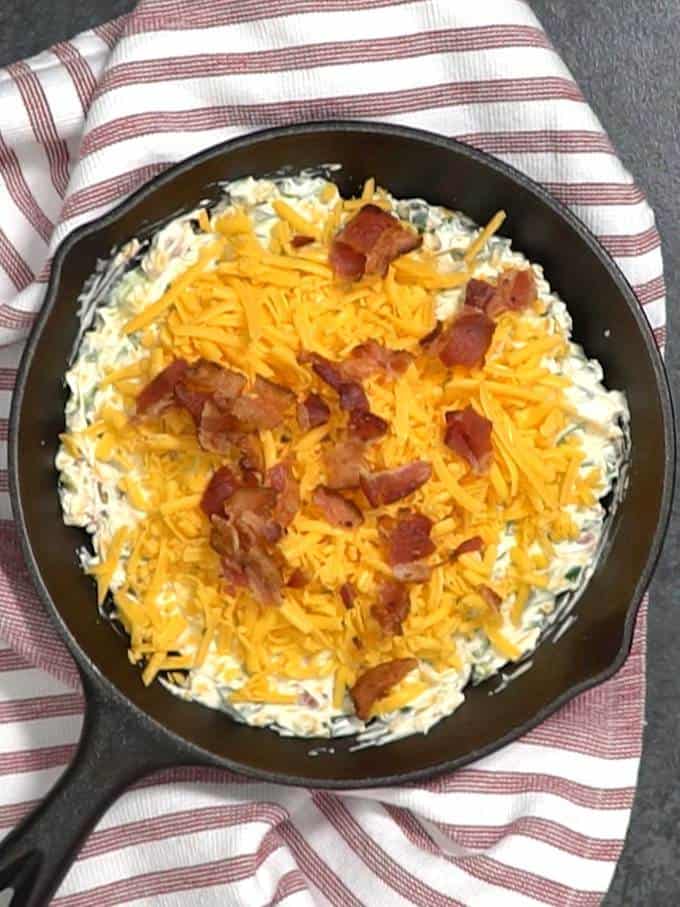 I popped the dip into a preheated 400°F oven for about 15 minutes. After 15 minutes, the cheese was melted and the dip was nice and bubbly.

I served this awesome dip with some Ritz Crackers and tortilla chips. To say that it was amazing is an understatement. The flavors perfectly complimented one another and every bite was unbelievably tasty. Yum! 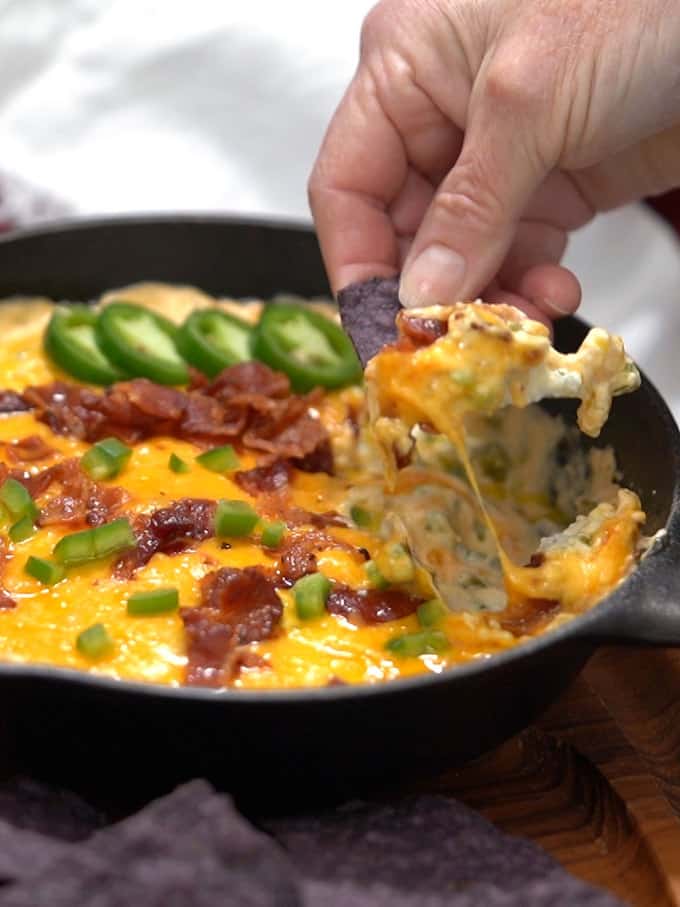 If you like Jalapeño Poppers, you should also try my delicious Wonton Jalapeño Popper Bites. Also, for another amazing cheesy dip, check out my Make Ahead Cheesy Buffalo Chicken Dip. 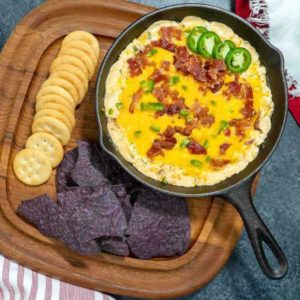 Bacon Jalapeño Popper Dip is the perfect appetizer for the busy holiday season and ultimate holiday feast. It's creamy and cheesy and full of bacon and jalapeño peppers. Bacon Jalapeno Popper Dip is easy to put together, can be made ahead of time and will likely be the first appetizer to disappear.
5 from 4 votes
Print Pin Rate
Course: Appetizer
Cuisine: American, Cinco de Mayo
Prep Time: 15 minutes
Cook Time: 15 minutes
Total Time: 30 minutes
Servings: 8 servings
Calories: 230kcal
Author: Chula King