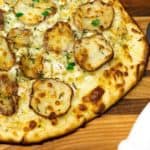 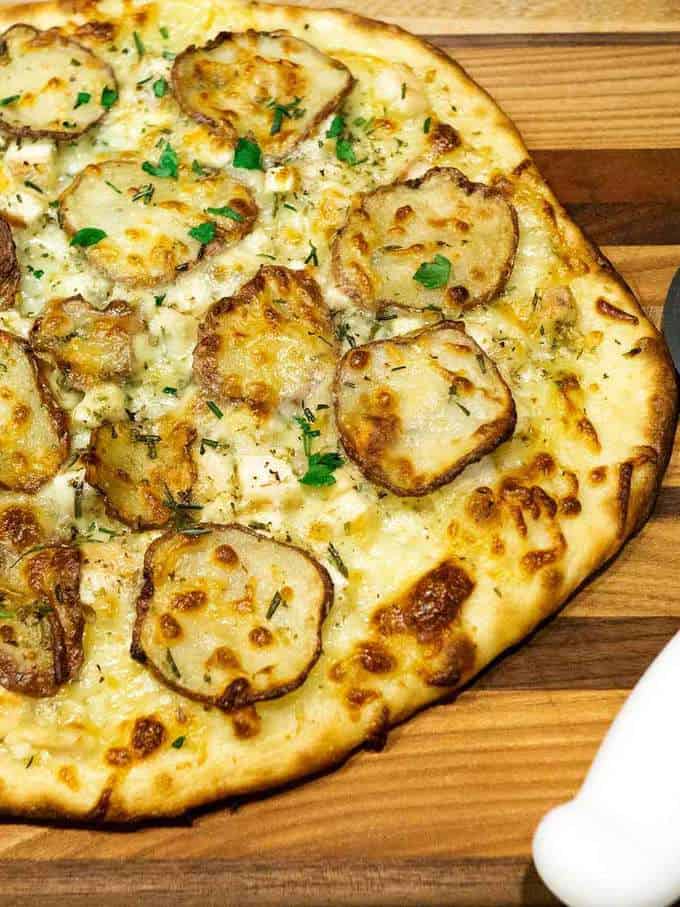 As a dutiful daughter, Susan got me this cookbook, and suggested that we try out the recipe.  I said absolutely! The actual recipe looks pretty involved, but actually doesn’t take that much time if it’s prepared in the five distinct steps. This pizza is so good that I’ve updated the recipe from the February 7, 2015 post.

Making the Pizza Dough for the CPK Rosemary Chicken and Potato Pizza:

In the first step, I prepared the pizza dough. I’ve tried different pizza doughs and my favorite is Neo-Neopolitan Pizza Dough from Peter Reinhart’s Artisan Breads Every Day. 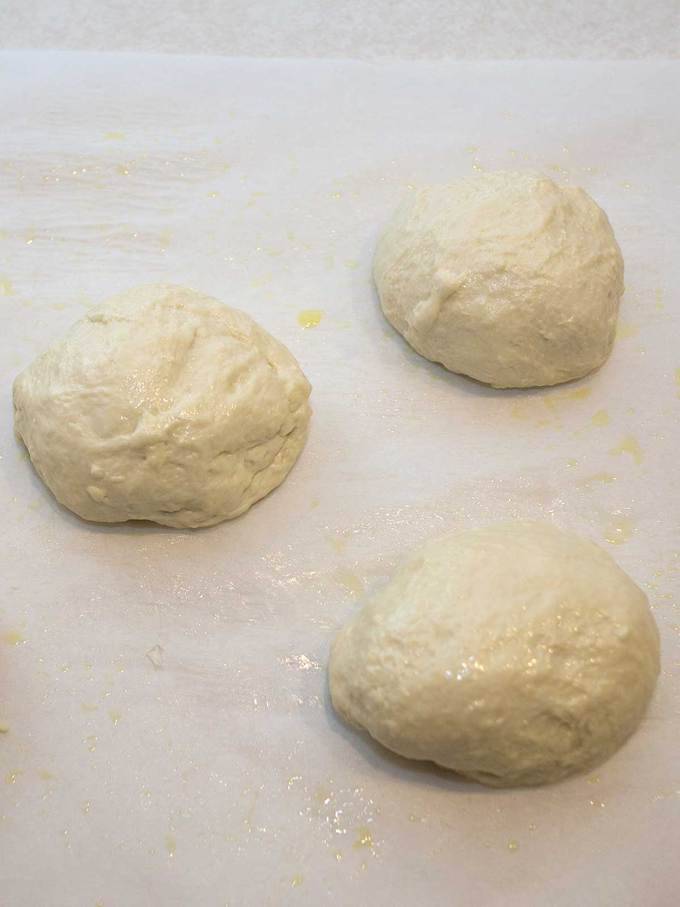 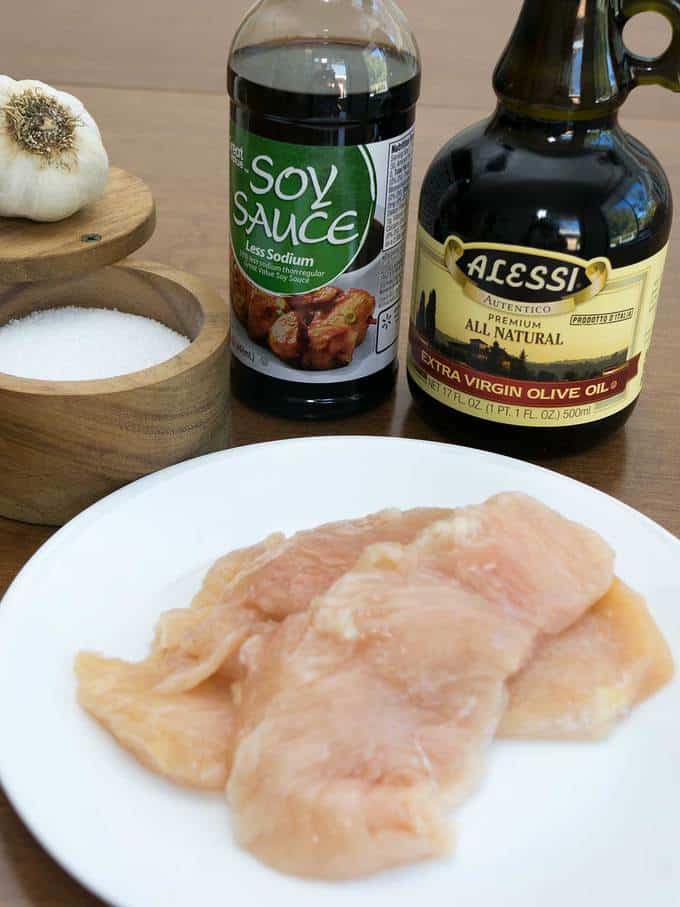 For the chicken marinade, I combined the minced garlic, soy sauce, Kosher salt and olive oil in a small bowl. Then I placed the boneless and skinless chicken breasts in a quart-size ziploc bag and poured in the marinade.  I sealed the bag and marinated the chicken in the garlic oil for about 15 minutes. 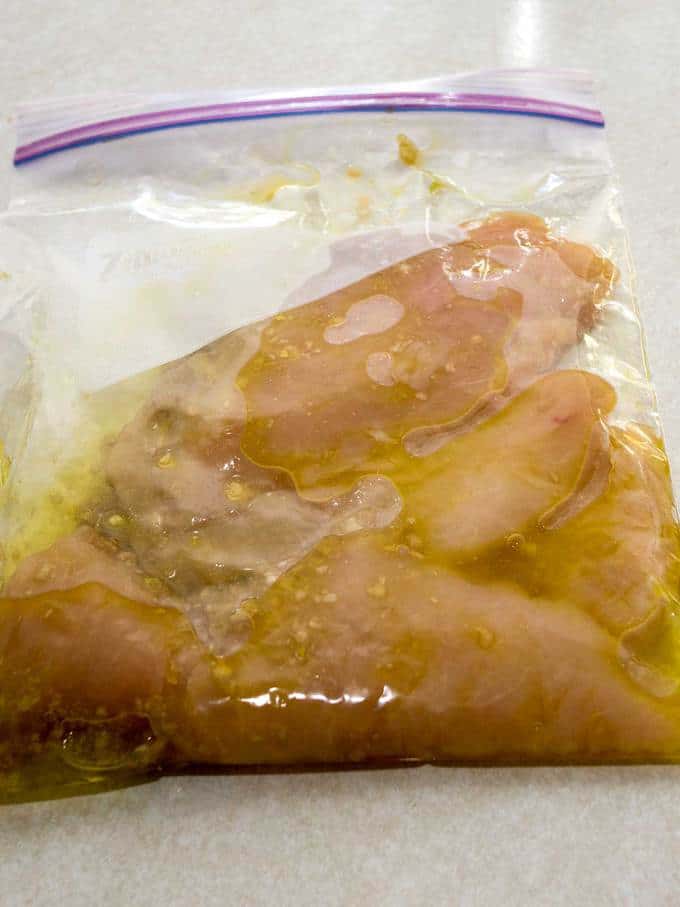 Next, I grilled the chicken on my panini press at 420° F for about 3 minutes until it was cooked through. Then, I removed the chicken and let it cool a bit. Once it was cool, I cut the chicken into half-inch cubes, and put it in the refrigerator until I was ready to build the pizzas. 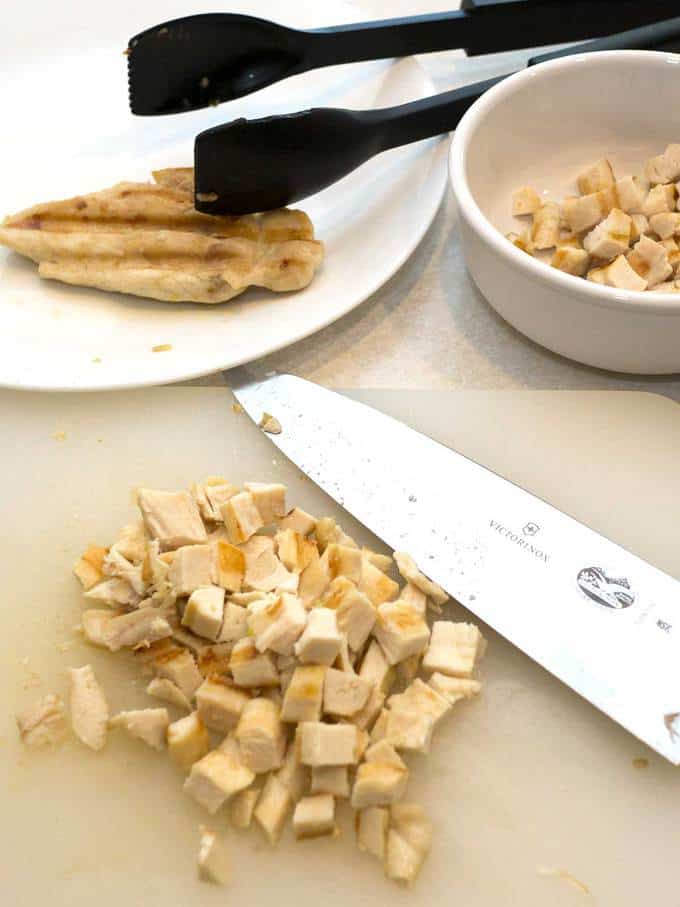 Making the Garlic-Shallot Butter with Lemon:

First, I cooked the shallots, garlic and thyme in one Tablespoon of the butter over medium high for 5 to 7 minutes until the mixture was a light brown. Then, I added the wine, lemon juice, salt, and white pepper. 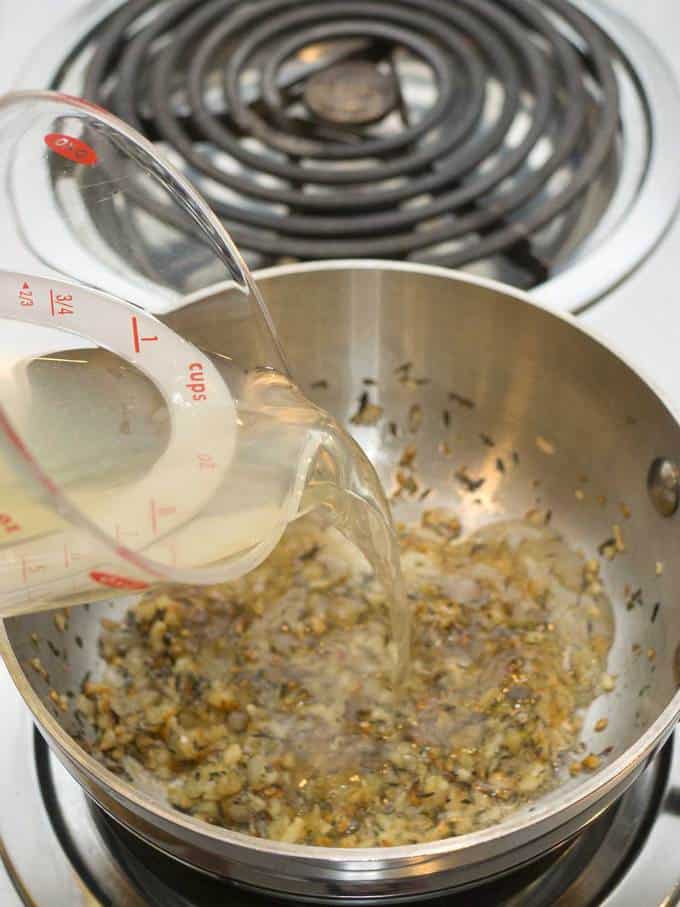 I whisked the mixture over medium high heat for about 5 minutes until it was reduced to about ½ cup. Then, I removed the pan from the heat and whisked in the remaining butter. I set this aside until was ready to build the pizzas. 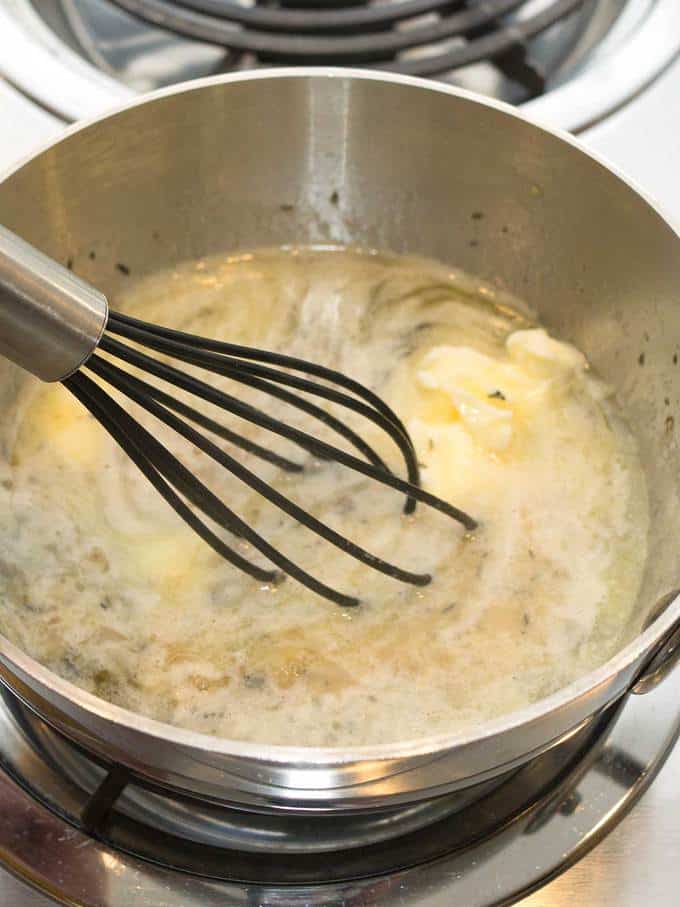 For the final step before building the CPK Rosemary Chicken and Potato Pizza, I prepared the potatoes. I used the following ingredients: Red potatoes, garlic, fresh rosemary, salt, oregano, white pepper and olive oil. The actual recipe called for too much salt, so I used half of what was called for.

I used my food processor with the 4mm blade to cut the potatoes. Then I mixed the garlic, rosemary, salt, oregano, white pepper and olive oil in a small bowl and added the mixture to the potatoes. I mixed the potatoes and mixture with a wooden spoon until the potatoes were well coated, and spread them out on a non-stick aluminum foil lined baking sheet. 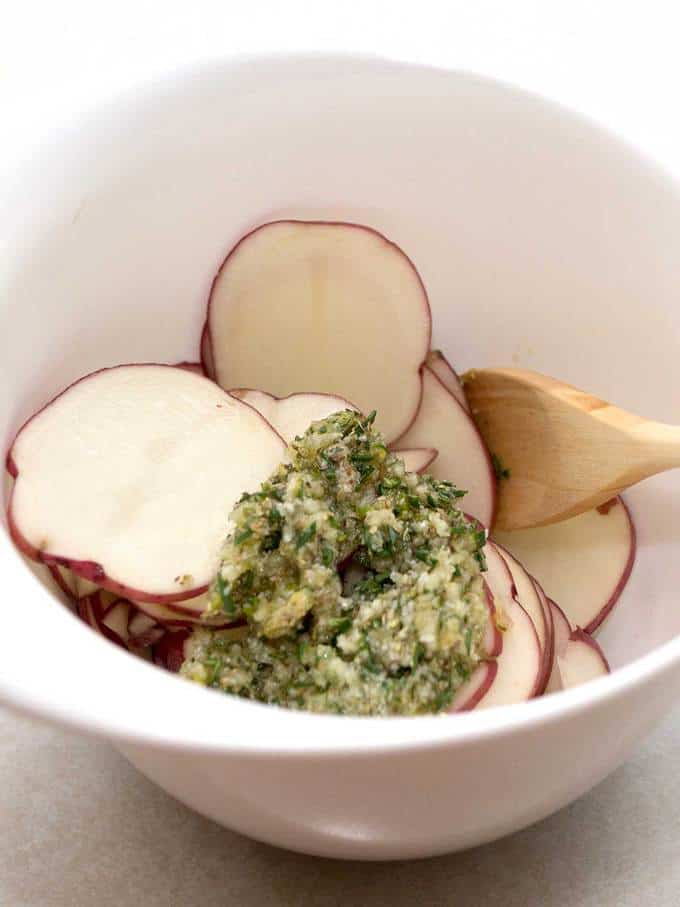 Into a 325° F oven the potatoes go for 40 to 45 minutes. I turned them half way through the cooking to ensure even browning. When they were done, I drained the potatoes on paper towels. 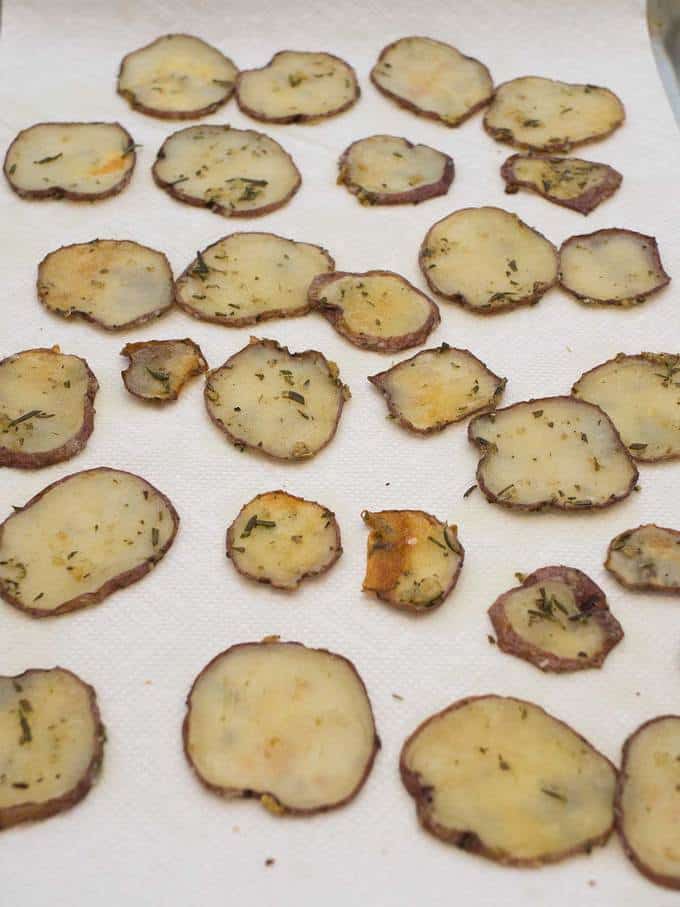 At this point, everything was ready for the building of the pizzas. This is where Susan took over.  She spread out the dough on a reusable piece of parchment. Initially, the dough was quite elastic, but became very easy to work with after it rested a bit. Then, she. spread some of the garlic butter on the dough, and sprinkled on some mozzarella cheese. 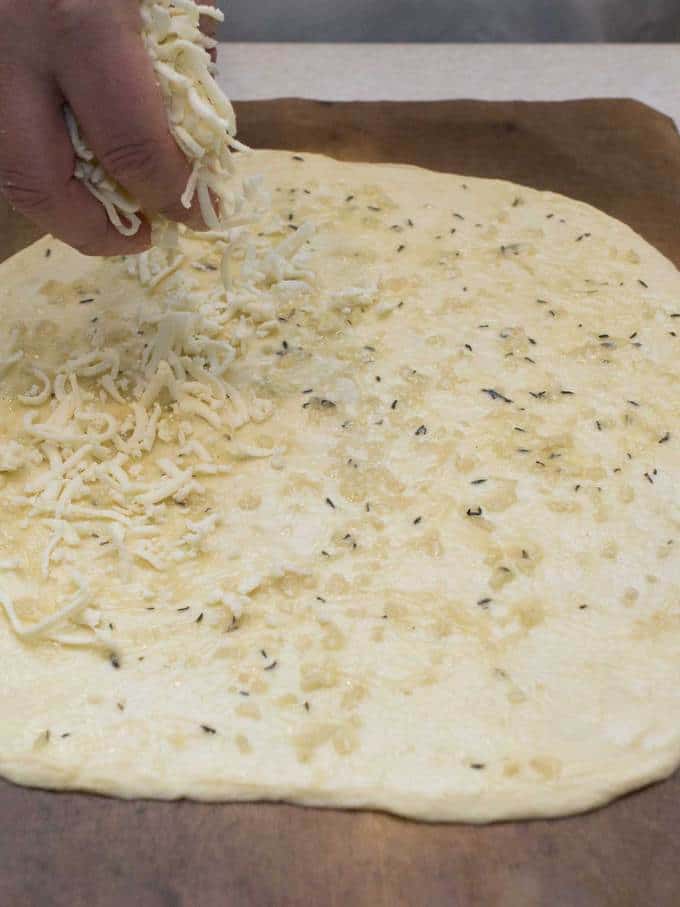 Next, Susan sprinkled on the chicken along with the fresh rosemary and oregano. Finally, she added the potatoes. 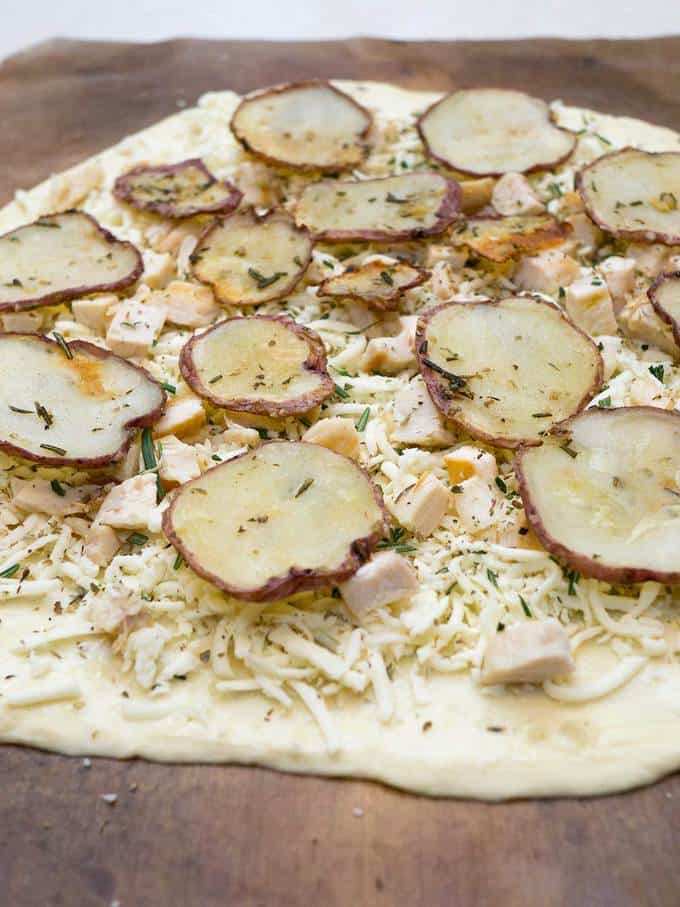 After sprinkling on a bit more mozzarella, Susan slipped the pizza onto a stone that had been heated in a 450° F oven. 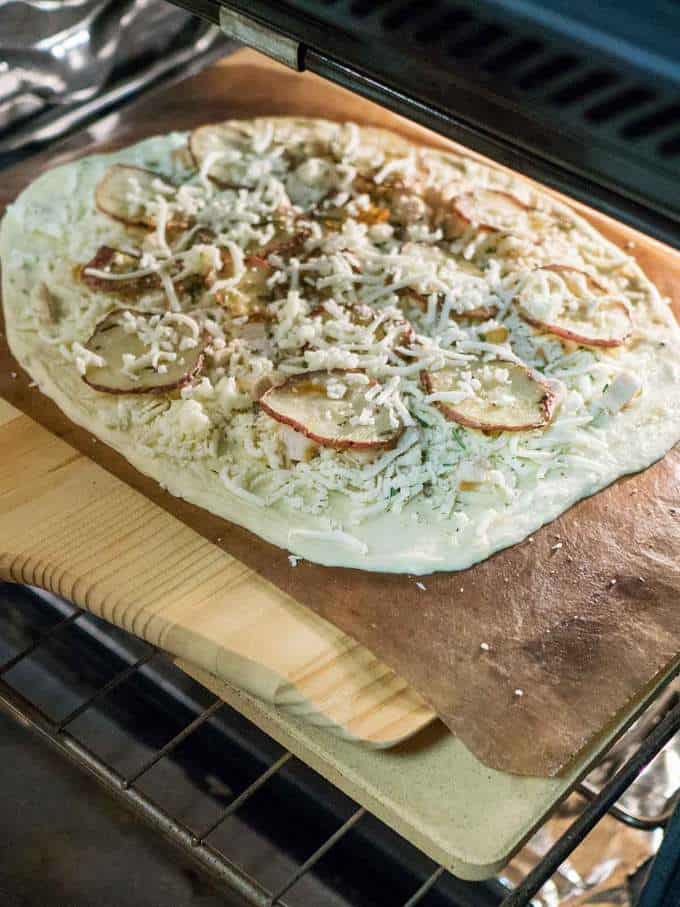 The pizza was perfectly done after 11 minutes. Susan proclaimed it even better than the CPK Rosemary Chicken and Potato Pizza that she had at the restaurant. Part of the reason was that the crust was thin and crispy.  Yum! 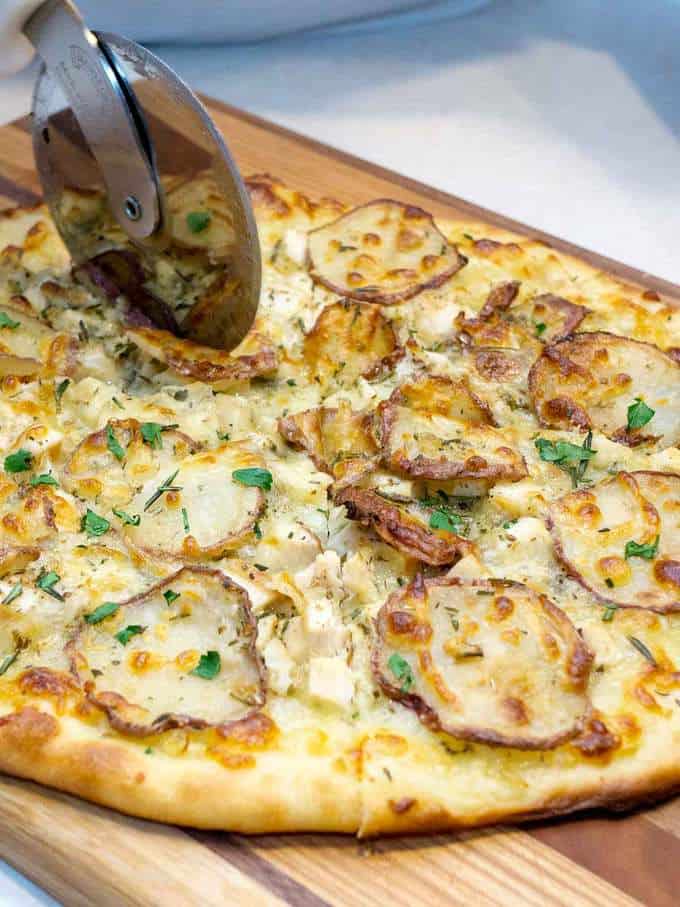 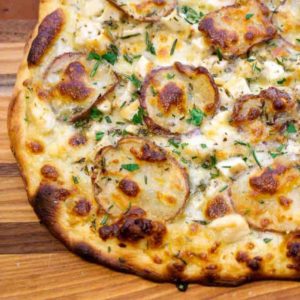