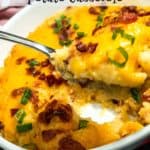 Twice Baked Potato Casserole takes the lowly baked potato to new heights with bacon, cheddar cheese, sour cream and butter to create an amazing side dish that is creamy and cheesy. It’s perfect for the holidays and family get-togethers when you want a spectacular dish. Twice baked potato casserole can be made ahead of time and leftovers, if any can be reheated in the microwave.

I used the following ingredients for this amazing dish: Russet potatoes, cheddar cheese, crispy bacon, sour cream, butter, salt and freshly ground black pepper. I also added some sliced green onion tops to the finished dish as a garnish for both color and flavor.

The baked potatoes are the star of the show. There are two basic ways to bake a potato – in the oven or in the microwave.

Baking the potatoes in the oven can between an hour and an hour and a half. When potatoes are baked in the oven, the skins somewhat dry out and maintain their structure. This makes it easy to cut and scoop out the potato with a spoon.

I could have used either way but decided to use the oven. The real differences between the two methods are the time it takes and the texture of the potato skins.

I made a mistake one time and skipped the piercing. To my horror, the potato exploded! Never again.

The next thing that I did was to bake the potatoes at 400°F for an hour and a half. If the potatoes had been smaller, it would have taken less time.

Once the potatoes were done, I removed them from the oven and let them cool for about 15 minutes.

Then, I cut the potatoes in half. Using a spoon, I scooped the pulp into a large bowl.

Once I had removed the pulp from the potatoes, I added the shredded cheese, crumbled bacon, sour cream, melted butter, salt and pepper.

At this point, I went back and forth as to whether I should use a potato masher or my electric mixer. I wanted to combine all of the ingredients but didn’t necessarily want a lump-free mixture.

Sometimes, I use the electric mixer which works fine,

This time, I used the potato masher which also worked fine. It’s ultimately a matter of preference.

Once all of the ingredients were mixed together, I dumped the mixture into a 2 ½-quart baking dish that I had sprayed with non-stick spray. I used the back of a spoon to smooth out the mixture.

Then, I sprinkled the top with some additional shredded cheese and crumbled bacon.

I removed the casserole from the oven and sprinkled on some chopped green onion tops as a garnish before serving it.

To say that the Twice Baked Potato Casserole was amazing was an understatement. In every bite, the ingredients perfectly complimented one another.

Since it’s just the two of us, I refrigerated the leftovers and re-heated them in the microwave for the next evening’s dinner. The leftovers were equally delicious. Yum!

Is there any difference in the taste between baking the potatoes in the oven and in the microwave?

Baking the potatoes in either the microwave or the oven will yield consistent results.

Can this be made with the skins left on the potatoes?

Does it matter whether I combine the ingredients using a potato masher or electric mixer?

Sometimes, I’ll use the potato masher and other times I’ll use the electric mixer. I haven’t detected any difference between the two methods.

Can Yukon Gold potatoes be used in this dish.

It’s best to use Russet potatoes in this dish because of their starch content. C

The taste of the dish should be the same regardless of the fat level of the sour cream that is used.

You can use whatever Cheddar cheese you have on hand.

Can this dish be made ahead of time?

One of the beauties of this dish is that it can be made ahead of time and baked right before you’re ready to serve it. Also, it reheats beautifully.

If the potatoes are baked in the oven, is it necessary to coat the skins with oil?

Since the potato skins will be discarded, it is not necessary to coat them with oil prior to baking.

Watch How I Made This Amazing Casserole

I hope you liked this recipe for Twice Baked Potato Casserole as much as I do. If so, please consider rating it and leaving a comment. Also, if you’d like to receive notifications of new posts by email, enter your email address in the Subscribe box. 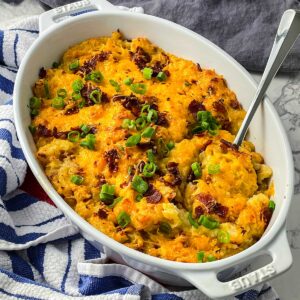 Twice Baked Potato Casserole takes the lowly baked potato to new heights with bacon, cheddar cheese, sour cream and butter to create an amazing side dish that is creamy and cheesy. It's perfect for the holidays and family get-togethers when you want a spectacular dish. Twice baked potato casserole can be made ahead of time and leftovers, if any can be reheated in the microwave.
5 from 6 votes
Print Pin Rate
Course: Side Dish
Cuisine: American
Prep Time: 10 minutes
Cook Time: 1 hour 40 minutes
Total Time: 1 hour 50 minutes
Servings: 6 servings
Calories: 491kcal
Author: Chula King