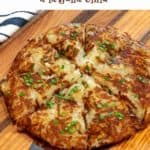 The Way to Cook is an incredible cookbook that has never failed to produce exceptional results. The Grated Potato Galettes are no exception.

I used the following four simple ingredients for this amazing dish: Baking or russet potatoes, clarified butter, salt and pepper.

Preparing the Potatoes and Clarified Butter

It is imperative that baking or russet potatoes be used in this recipe. The reason is that the starch in the baking potatoes serves to hold the dish together.

It’s also important that the potatoes be cooked ahead of time and allowed to cool to ensure proper grating.

Therefore, before I left for work this morning, I steamed two large baking potatoes for about 20 minutes until they were slightly underdone. Then, I refrigerated the potatoes until I was ready to grate them.

In the past, I made clarified butter in the microwave. However, one time when the butter basically exploded in the microwave, I decided to use the stovetop method. I wish I had taken a picture of this disaster to show you!

Anyway, I started by melting a stick of unsalted butter in a small saucepan over medium low heat without stirring. Once the butter was melted, I removed the pan from the stove and let the butter sit undisturbed for about 5 minutes. This allowed the milk solids separate from the pure butter.

After 5 minutes, all of the milk solids had settled on the bottom of the saucepan. Therefore, I carefully poured the pure butter into a small measuring cup.

I started by peeling the cold potatoes. Then, I grated the potatoes using the large holes in a box grater.

After that, I placed the grated potatoes in a large bowl. Next, I tossed them with a half teaspoon of Kosher salt and a quarter teaspoon of freshly ground black pepper.

When it was time to start cooking, I added half of the clarified butter to a 10-inch skillet. Then, I heated the butter over medium heat for several minutes.

When the butter was hot, I added the grated potatoes and pressed them lightly to form a compacted disk.

I cooked the potatoes over medium heat for about 13 minutes until they were browned and crispy on the bottom.

After another 13 minutes or so, the underside of the galette was perfectly browned and crispy.

I turned the galette onto a cutting board and sprinkled it with chopped fresh chives.

The Grated Potato Galette à la Julia Child was a perfect – buttery crispy on the outside and creamy on the inside. Sometimes, I make individual galettes rather than a large galette. Double Yum!

What is a galette?

A galette (pronounced guh-let) is a rustic, free-form tart made generally made with a single layer of crust. Once the filling is added, the crust is folded up around the sides of the filling. This grated potato galette is made without crust.

Can Yukon gold or red potatoes be used in place of the russet potatoes?

This dish is best made with russet potatoes because of the higher starch content which helps to bind the ingredients together. Therefore, I would recommend against using Yukon gold or red potatoes in this recipe.

What is the difference between this galette and latkes or potato pancakes?

The recipe for this galette uses only potatoes seasoned with salt and pepper. Latkes on the other hand generally include egg, milk and flour/matzo meal to bind the potatoes together. Potato pancakes are similar to latkes, but often omit the flour.

Both this galette and the Swiss Rösti are basically the same. The main difference is that the recipe for this galette uses par-cooked potatoes before whereas Rösti uses raw potatoes.

Can this galette be made ahead of time?

The galette may be cooked ahead of time and reheated briefly in a 425° F oven.

I first blogged about this amazing dish on April 2, 2016. Since then, I’ve made the potato galette a number of times with consistently perfect results. Therefore, I decided to update the post with new pictures and improved text.

If you like this dish, you should try my Pommes Anna or Irish Pan Haggerty. 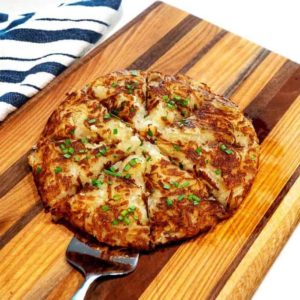 Grated Potato Galettes are buttery crispy on the outside and creamy on the inside. They are easy to make and an elegant side dish.
5 from 14 votes
Print Pin Rate
Course: Side Dish
Cuisine: American
Prep Time: 15 minutes
Cook Time: 45 minutes
Time for Potatoes to cool.: 2 hours
Total Time: 1 hour
Servings: 4 servings
Calories: 287kcal
Author: Chula King