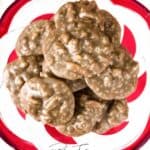 New Orleans Pralines have a creamy consistency that is similar to fudge. They are generally made by cooking sugar, butter, cream, and pecans over a medium-high heat until the mixture reaches the soft ball stage. They are dropped by spoonful’s onto parchment paper or wax paper and left to cool. No Mardi Gras celebration would be complete without this delicious confection!

New Orleans pralines are different from their European ancestor in that the New Orleans variety uses pecans rather than almonds and includes cream. Pecans were used because they were, and still are, plentiful. Cream was introduced as a thickener.

When I was growing up in the South, I learned to cook at a relatively young age. One of my memories of those early days was making Pralines from the recipe on the back of the box of the Domino Light Brown Sugar.

I remember that the recipe only called for light brown sugar, i.e., it didn’t have granulated sugar. It also called for a small amount of cream of tartar and used evaporated milk. The Pralines always turned out great!

I grew up pronouncing Pralines as “PRAY-leans”. I’ve also heard them pronounced as “PRAW-leans”, which is the way they are pronounced in New Orleans. Whatever the pronunciation, Pralines are a creamy, sugary treat chocked full of pecans (pronounced “puh-KAHNs”, not “PEE-cans”.)

What You’ll Need To Make This Confection

How To Make New Orleans Pralines

When I made Pralines as a kid, I had never heard of a candy thermometer. Rather, I always cooked the mixture until a small amount dropped in cold water formed a soft ball.

I still use this soft ball technique today double check the accuracy of the candy thermometer!

I guess as a kid, I just let it cool off a bit!

Once it reached 150°F, I added the vanilla extract and pecans. I stirred the mixture constantly with a wooden spoon until it began to thicken and lose some of its gloss. This took several more minutes.

I set the baking sheets aside to allow the candy to thoroughly cool and harden. The result was 3-dozen delicious Pralines. Yum!

Isn’t corn syrup bad for you?

Are pralines and toffee the same thing?

While pralines and toffee are made in a similar fashion, they are not the same because they are cooked to different temperatures. Pralines have a soft, creamy texture while toffee is hard.

How do you store pralines?

You can store pralines in an airtight container for up to a week.

What is the soft ball stage in candy making?

The soft ball stage, reached at 236°F, occurs when a small amount of the candy mixture forms a soft ball when dropped in cold water.

If you’d like to try another variation of this recipe, check out my Pecan Praline Morsels.

I hope you liked this recipe for New Orleans Pralines as much as I do. If so, please consider rating it and leaving a comment. Also, if you’d like to receive notifications of new posts by email, enter your email address in the Subscribe box. 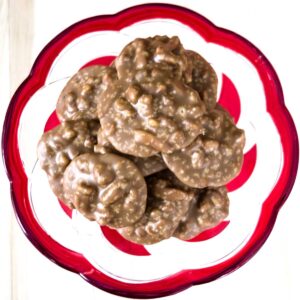 New Orleans Pralines have a creamy consistency that is similar to fudge. They are generally made by cooking sugar, butter, cream, and pecans over a medium-high heat until the mixture reaches the soft ball stage. They are dropped by spoonful's onto parchment paper or wax paper and left to cool. No Mardi Gras celebration would be complete without this delicious confection!
5 from 6 votes
Print Pin Rate
Course: Dessert
Cuisine: Mardi Gras, New Orleans, Southern
Prep Time: 5 minutes
Cook Time: 20 minutes
Cooling Time: 10 minutes
Total Time: 25 minutes
Servings: 36
Calories: 149kcal
Author: Chula King