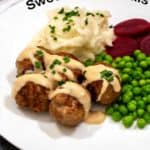 Ikea’s Swedish Meatballs are legendary. Up until a few days ago, the recipe was a carefully guarded secret. However, like several other organizations responding to the Covid-19 pandemic, Ikea released the recipe for its iconic meatballs so that fans could enjoy them at home. I tried my hand at making the Swedish Meatballs. Here’s what I learned! 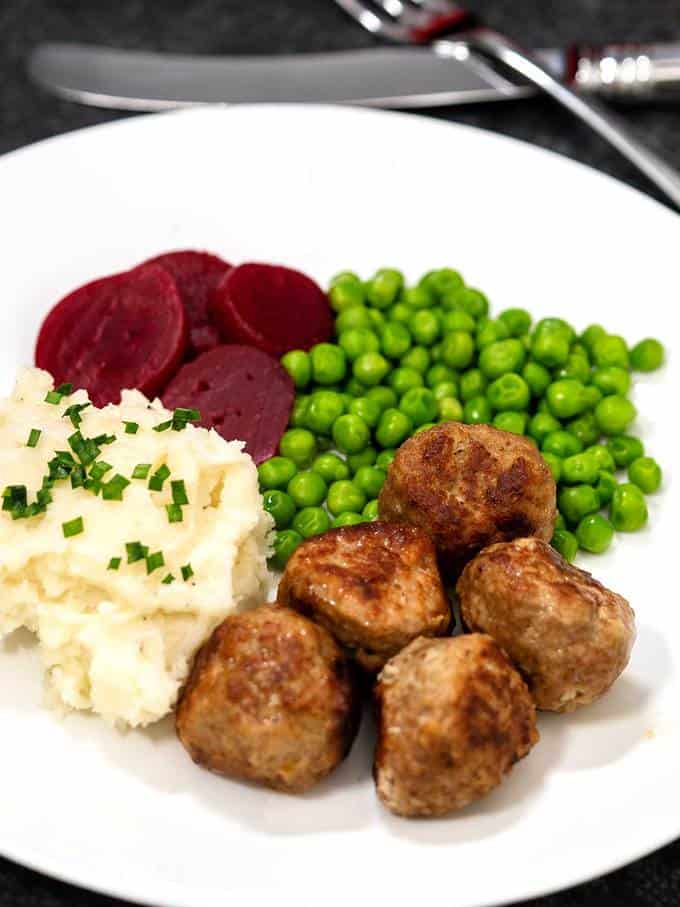 First, in the interest of full disclosure, I’ve never had Ikea’s meatballs. Therefore, I didn’t have anything really to compare them to. After two attempts at making them, however, my view is that they are amazingly delicious and super easy to make!

About the Recipe Ikea Released 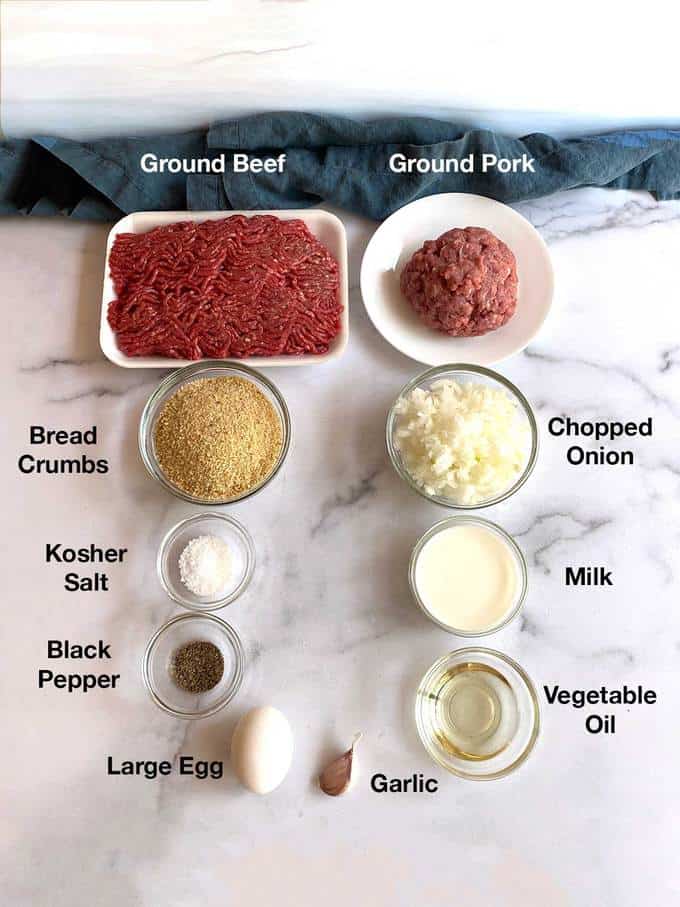 However, weights in the recipe that Ikea released were metric, i.e., in grams. Therefore, I spent some time converting from grams to US cups and ounces. The conversion yielded some non-standard weights. For example, the Ikea recipe called for 500 gram of ground beef which is 17.637 ounces, or slightly over a pound.

Because of the non-standard US weights, I scaled the recipe back such that it used one pound or 16 ounces of beef and comparable proportions of the other ingredients.

If you’ve read my blogs, you probably know that I’m a major geek when it comes recipes and weighing the ingredients. No exception here!

The cream sauce for the meatballs is made like a standard béchamel sauce. However, the ingredients differ somewhat. In addition to the standard butter and flour, the cream sauce included vegetable broth, beef broth, heavy cream, Dijon mustard and soy sauce. 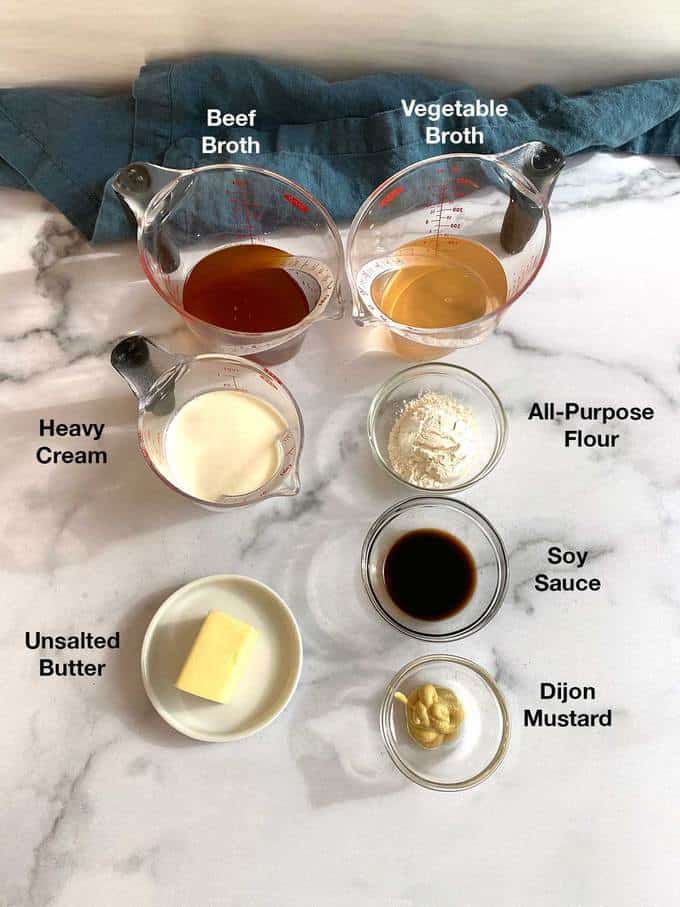 The first time I made the cream sauce, I thought that it was all right, but not exceptional. The second time I made it, I added some salt and pepper at the end. That made all the difference in the world!

The soy sauce that I used was low sodium. Perhaps if I had used regular soy sauce I wouldn’t have needed to add the salt!

Making the Ikea Swedish Meatballs – What I Learned

I started by adding the ground beef and ground pork to the food processor fitted with a steel blade. I processed the meats for about 10 seconds to combine them. 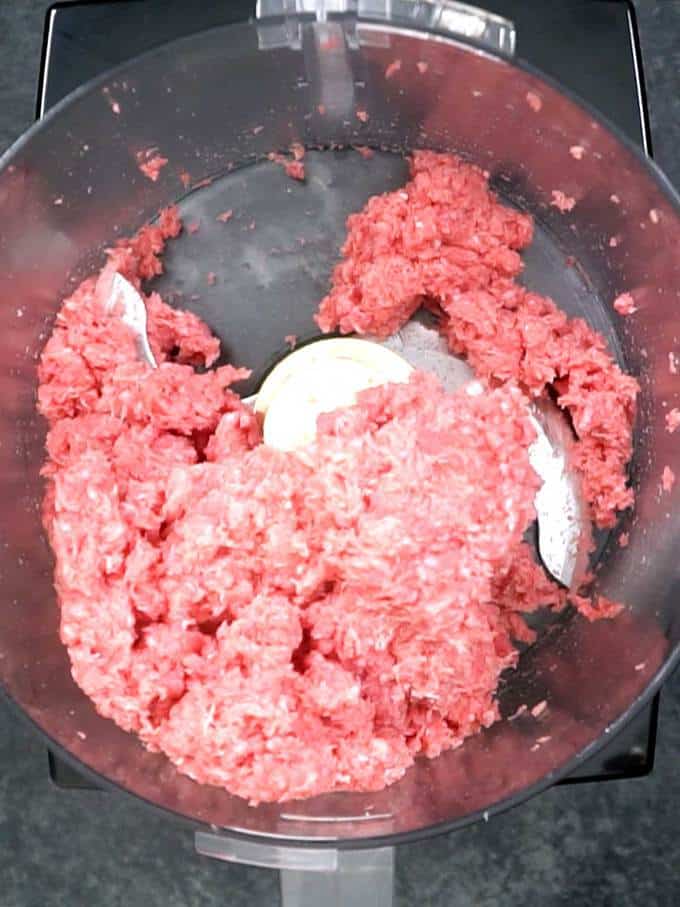 Next, I added the onion, garlic, breadcrumbs, egg, milk, salt and pepper to the meat mixture and processed it for about 20 seconds. 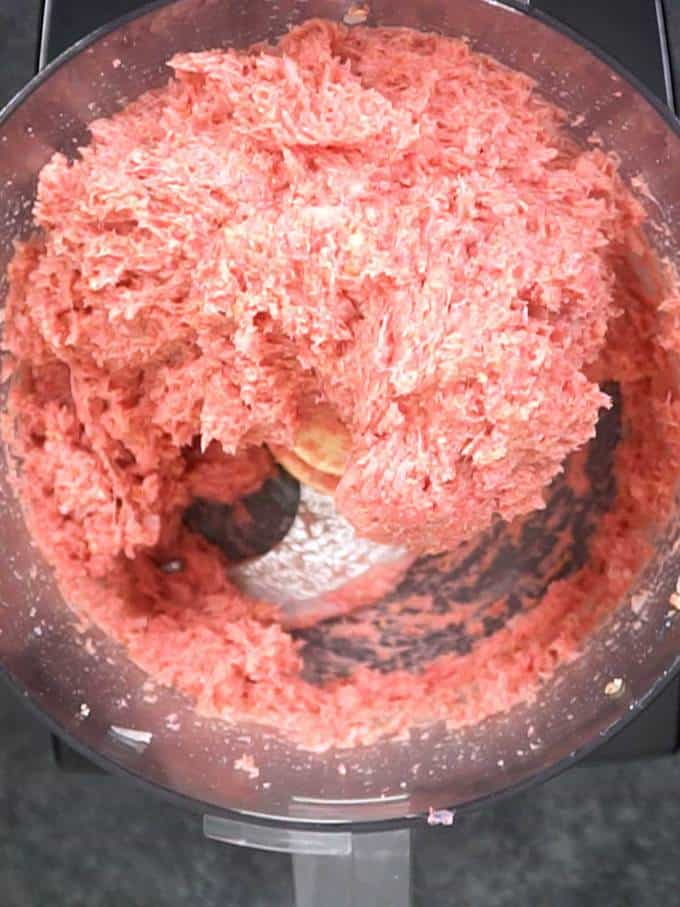 I took a small amount of the meatball mixture and cooked it in the microwave for about 20 seconds to see if the salt and pepper amounts were correct. It was perfect for my taste! Had I needed to add more salt and/or pepper, this would have been the time to do it.

I formed the meatballs by scooping the mixture in a 1 ¾-inch ice cream scoop and rolling it into a ball between my hands. I ended up with 28 meatballs. 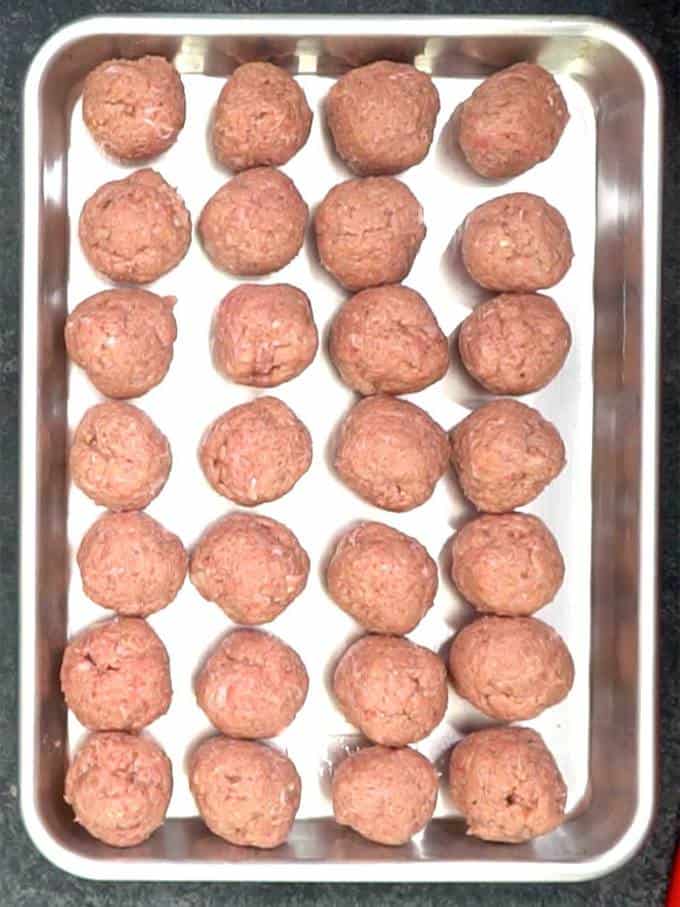 Per Ikea’s recipe, I refrigerated the meatballs for 2 hours before cooking them. The reason given was that refrigeration helped to hold the mixture together. This was definitely the case when I mixed everything together by hand. However, because of the consistency from the food processor, I’m not really sure that refrigeration was necessary.

When time came to cook the meatballs, I heated some vegetable oil in a 12-inch skillet over medium heat. Working in batches, I browned the meatballs on all sides. Then, I transferred them to an oven-proof dish. I covered the dish with aluminum foil and baked the meatballs in a 350°F oven for 30 minutes. 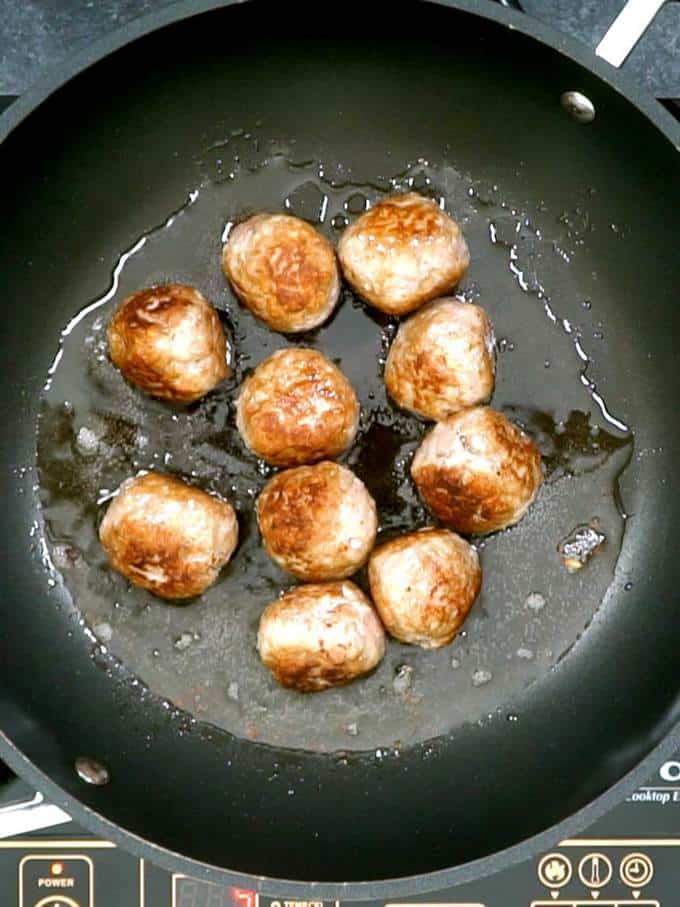 Making the Cream Sauce for the Ikea Meatballs

As I previously indicated, the cream sauce was made like a béchamel sauce.

Once the sauce started to thicken, I added the cream, Dijon mustard and soy sauce. I whisked the sauce until it was smooth and bubbly. I tasted the sauce and thought that it needed a bit of salt and pepper, which I added. That’s it! 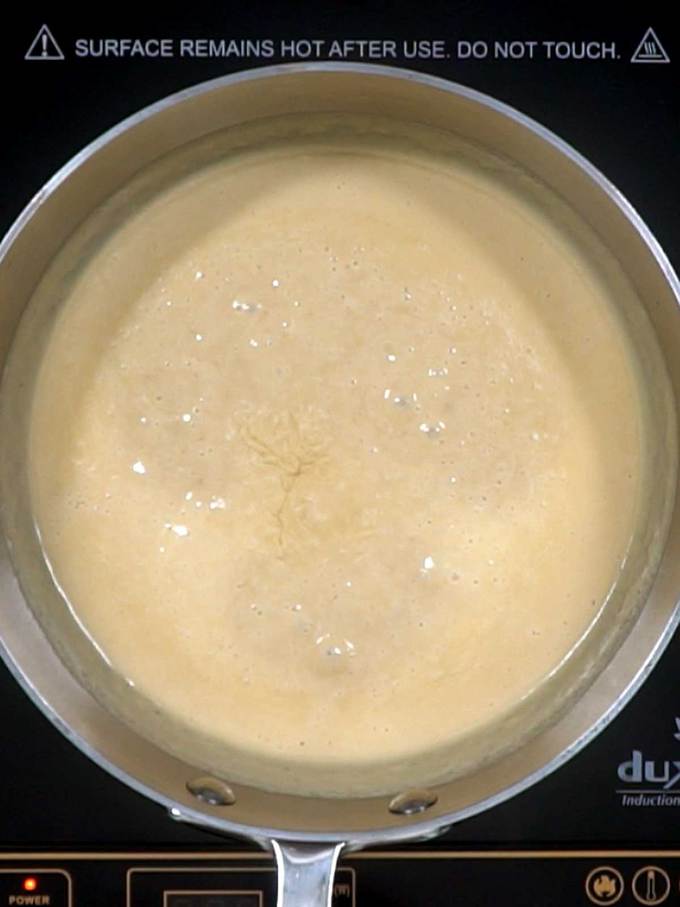 After the two attempts at making Ikea’s Iconic Swedish Meatballs, my conclusion is that they are amazing, especially when the meat mixture is combined in the food processor.

The meatballs were tender and flavorful. The garlic really contributed to the flavor. The cream sauce was delicious and perfectly complimented the meatballs.

I served Ikea’s Swedish Meatballs with some sauce spooned over them along with mashed potatoes and green peas. I added some sliced beets for color! Yum! 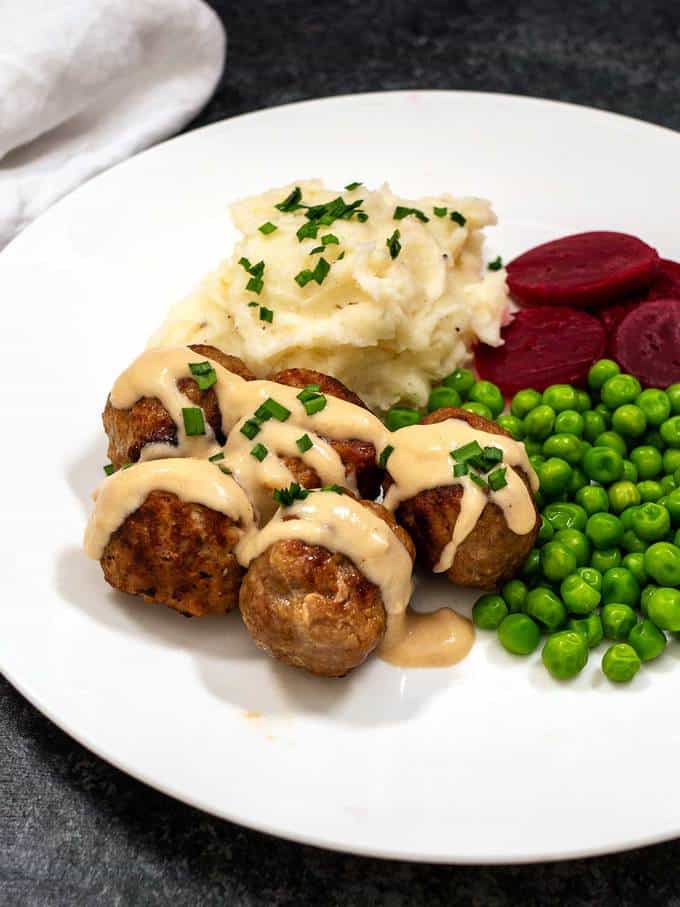 I hope you liked this recipe for Ikea’s Iconic Swedish Meatballs as much as I do. If so, please consider rating it and leaving a comment. Also, if you’d like to receive notifications of new posts by email, ever your email address in the Subscribe box. 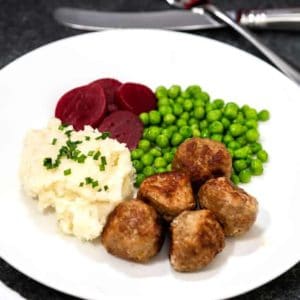 Ikea's Swedish Meatballs are legendary. Up until a few days ago, the recipe was a carefully guarded secret. However, like several other organizations responding to the Covid-19 pandemic, Ikea released the recipe for its iconic meatballs so that fans could enjoy them at home. I tried my hand at making the Swedish Meatballs, scaled to US measurements. Here's what I learned!
5 from 2 votes
Print Pin Rate
Course: Main Course
Cuisine: Swedish
Prep Time: 15 minutes
Cook Time: 45 minutes
Resting/Cooling Time: 2 hours
Servings: 6 servings
Calories: 453kcal
Author: Chula King