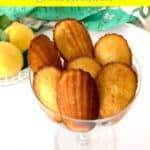 When Susan and I were recently in Paris, we tried a lot of different pastries. We wanted to try to replicate them on our return. This included Lemon Madeleines from Galeries Lafayette on Boulevard Haussmann. 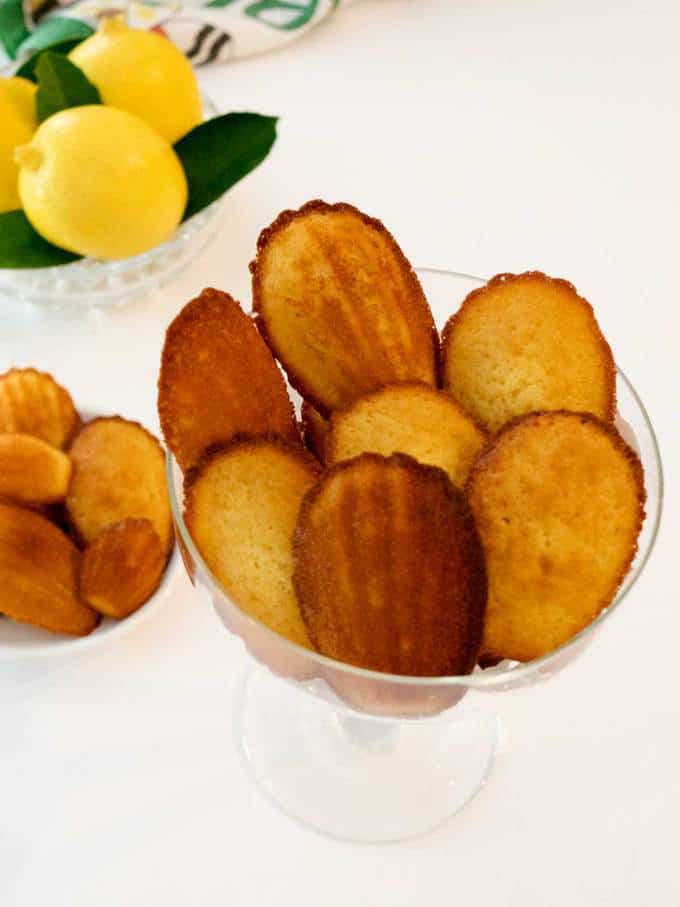 The French Lemon Madeleines were not only pitiful to look at, but also dry and tasteless.  I was pretty sure that I could do better! 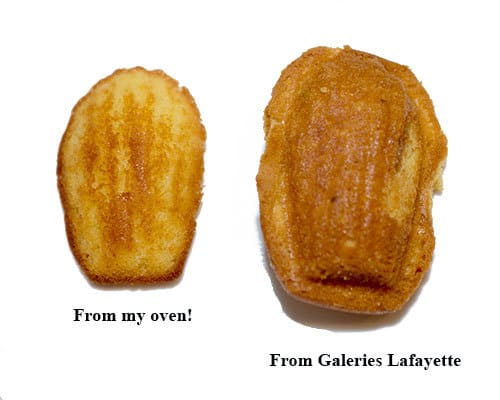 In addition to the visits to different pâtissiers, we visited my very favorite cookware shop – E.Dehillerine on Rue Coquillière in the Les Halles area. If you saw the movie Julie & Julia, you may remember a scene where Julia and friend were shopping in a cookware shop. That was E.Dehillerine. 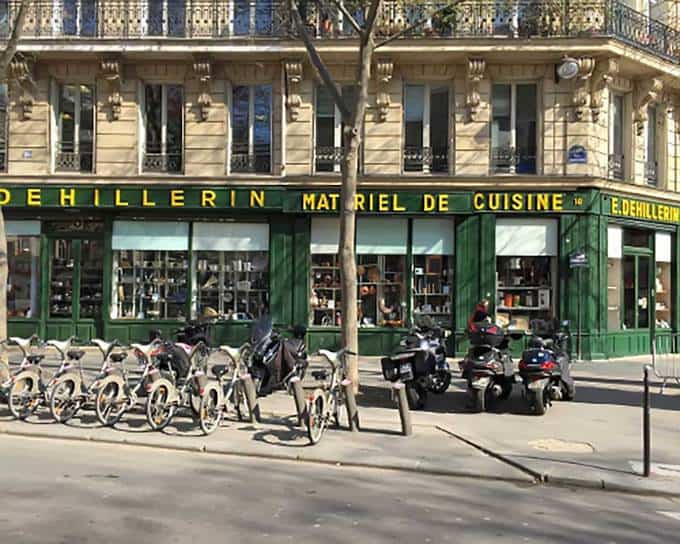 One of my purchases from E.Dehillerine was a mini Madeleine pan. I thought would be perfect for the Lemon Madeleines. As it turned out, the mini Madeleines, were not as impressive as the regular sized ones. They were, however, delicious. In fact, the Master Taste Tester finished them off in one sitting! After making one pan of the mini’s, I used the rest of the batter with a regular sized Madeleine pan. 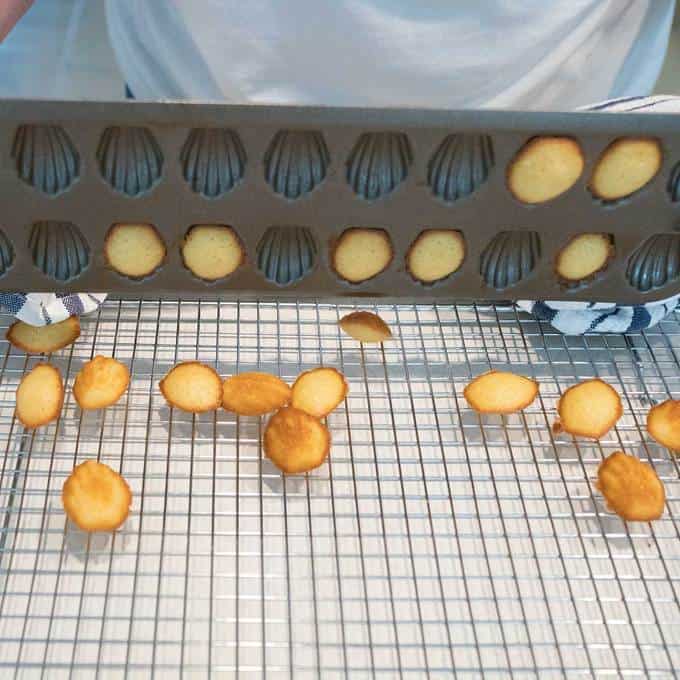 The recipe that I used was from Dorie Greenspan’s Baking Chez Moi. Everything that I’ve made from this wonderful cookbook has been outstanding. The Lemon Madeleines were no exception! 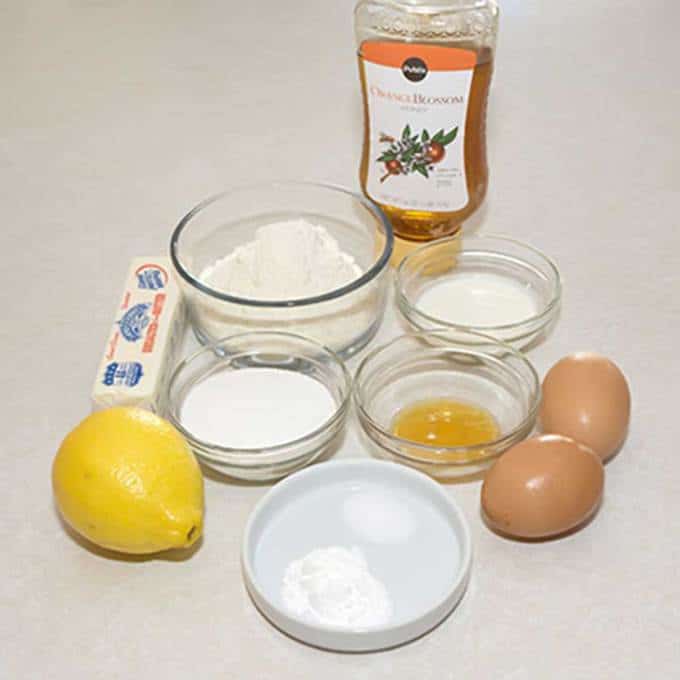 Making the Batter for the Lemon Madeleines:

First, I whisked together the flour, baking powder, and salt in a small bowl. Then, I added the sugar and lemon zest to a large bowl, and rubbed them together with my fingertips until the sugar was moist and fragrant. 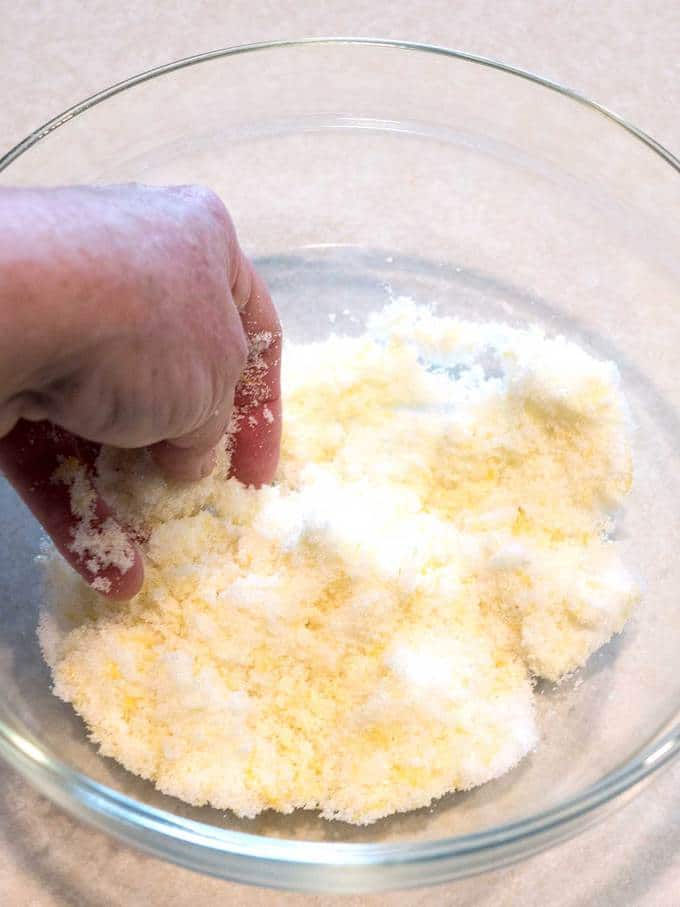 Next, I added the eggs to the sugar/lemon mixture. I beat it on high with my electric mixer until it was pale and thick.  This took about 5 minutes. 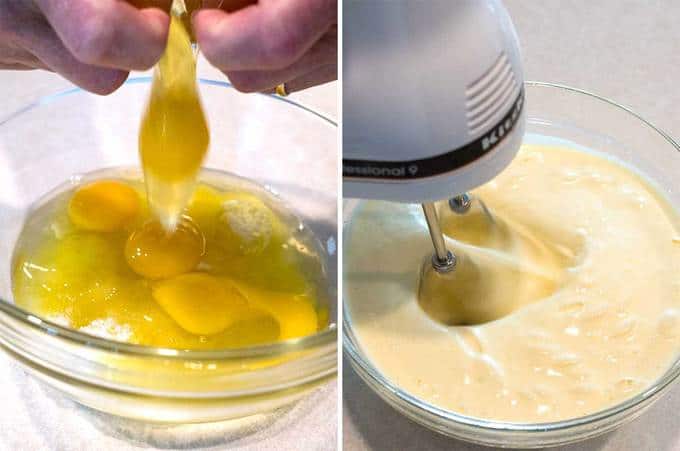 After that, I added the honey and vanilla extract, and beat the mixture until everything was well incorporated. 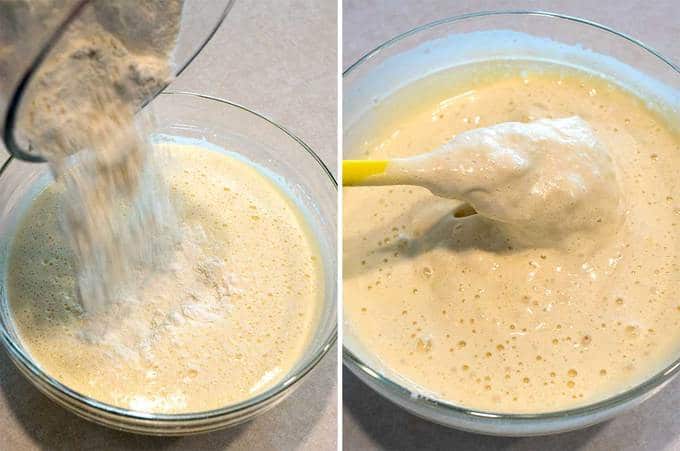 Finally, I added the warm melted butter, and when it was incorporated, the milk. 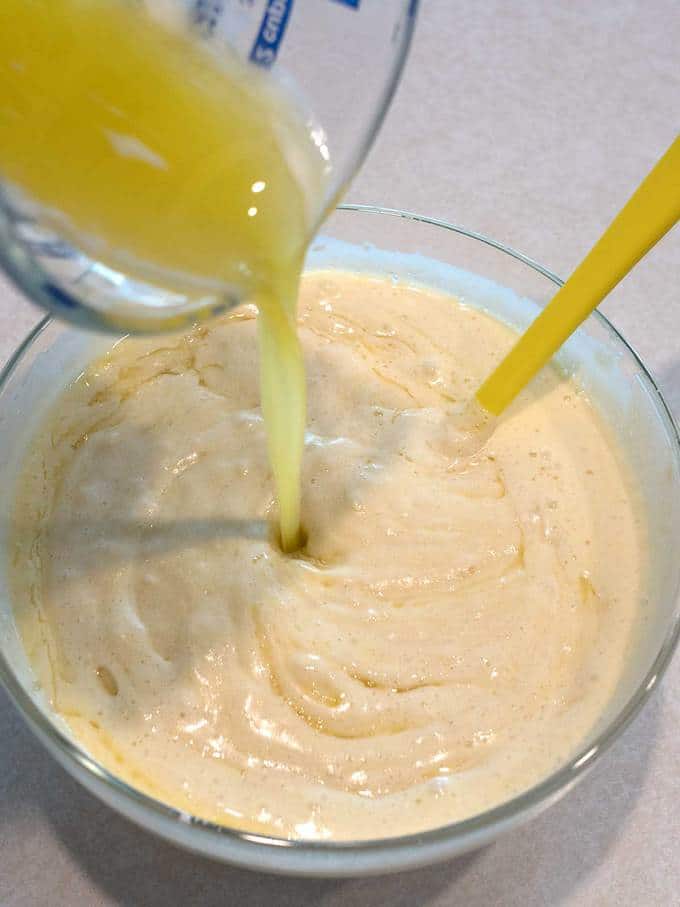 Before baking the Lemon Madeleines, I pressed a piece of plastic wrap against the surface of the batter. I refrigerated it for about an hour. After an hour, I sprayed the Madeleine pan with non-stick baking spray. I used a 1-½ inch ice cream scoop to fill the molds about ¾ full with the batter. 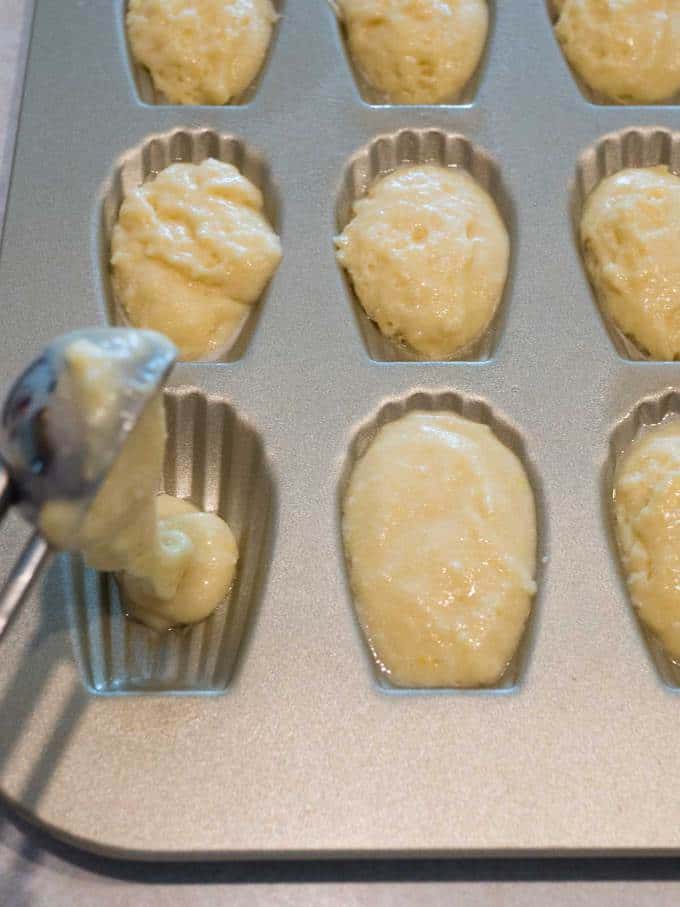 Before baking the Madeleines, I refrigerated the filled pan for another hour. After an hour, I put a heavy baking sheet on the center rack of the oven and preheated it to 400° F. When the oven reached temperature, I removed the filled Madeleine pan from the refrigerator and placed it on the hot baking sheet. I baked the Madeleines for about 11 minutes, until the they were golden brown. According to Dorie Greenspan’s recipe, the reason for following this procedure was to mimic the heat of a baker’s hearth oven, the way that a pizza stone does. Interestingly, this procedure kept the Madeleines from over-browning.

When they were done, I removed the Lemon Madeleines from the oven. I turned them out onto a wire rack to cool completely. 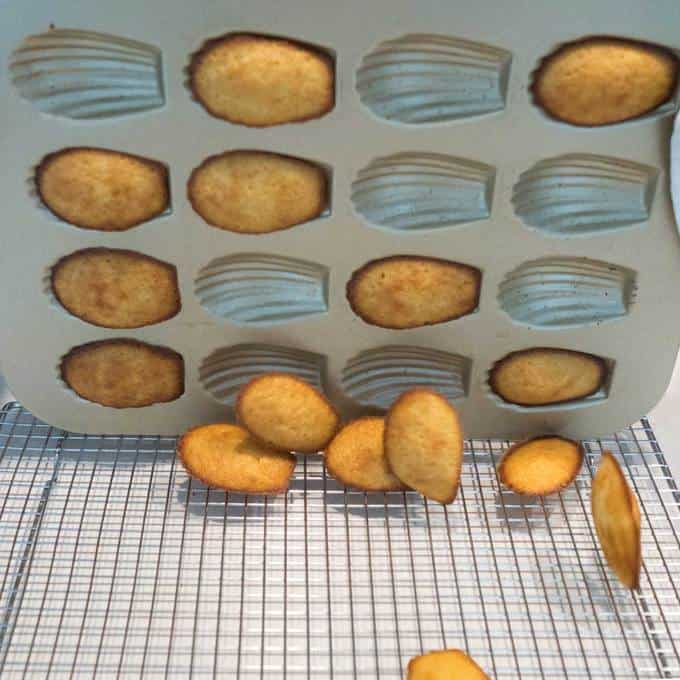 I decided to glaze some of the Lemon Madeleines with a simple lemon juice/confectioners’ sugar glaze. They were so good plain that I almost didn’t bother with the glaze. That would have been a huge mistake!

First, I whisked together some lemon juice and the confectioners’ sugar. Then, I dipped the top of the Madeleines in the glaze. I put them on a wire rack that was placed over a baking sheet.

I baked the glazed Madeleines in a preheated 500° F oven for several minutes. During this time, the glaze melted and coated the top of the Madeleines. I was amazed at the transformation of the glaze – it was shiny and non-sticky.

I actually doubled the recipe because I knew how quickly the Madeleines would disappear. With the double recipe, I ended up with 20 mini’s and 40 regular sized Lemon Madeleines. They were the best I’ve made so far. At some point, I might try the mini Madeleine pan again. I will definitely use this recipe, and will definitely go the extra step with the glaze. Rather than only glazing half of the Madeleines like I did this time, I’ll glaze all of them. Yum! 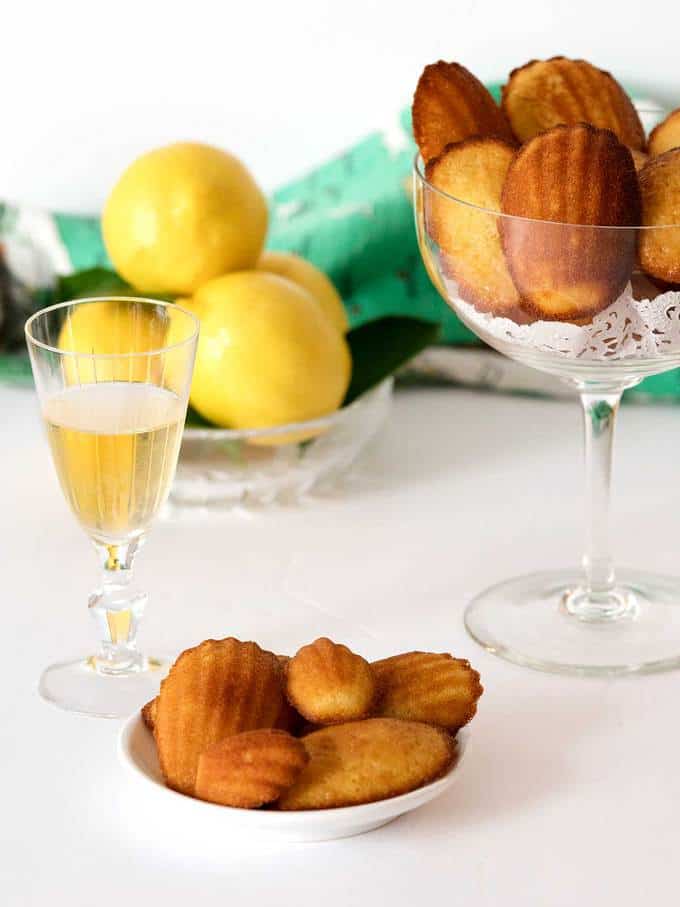 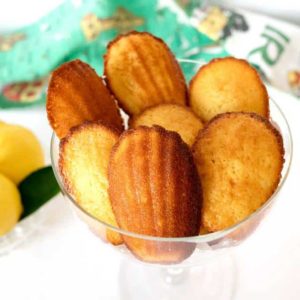 For the Glaze (Optional)