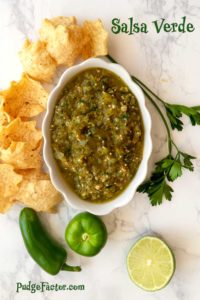 Salsa Verde is a delicious addition many Mexican dishes and is equally amazing on its own. Its bright fresh taste will convince you to never reach for the store-bought salsa again. This awesome Salsa Verde is from Grits and Pinecones’ Salsa Verde Chicken Enchilada post. It’s just in time for Cinco de Mayo! 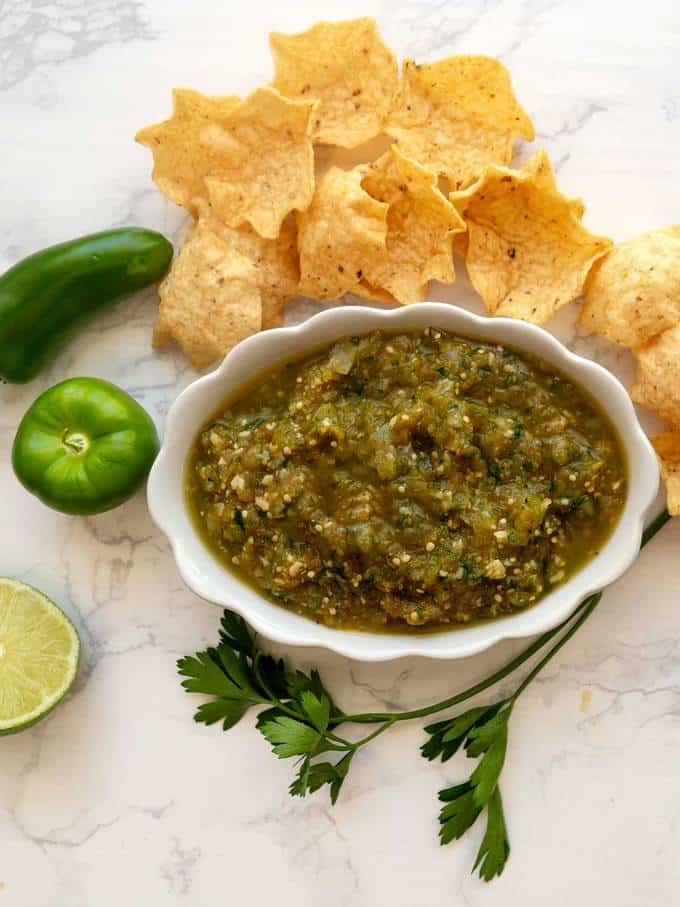 Since I had never had Salsa Verde before, I decided to first try the store-bought version. It was absolutely awful! However, I plowed ahead with Grits and Pinecones’ recipe. Boy am I glad that I did!

The Star of the Show – Tomatillo

Tomatillos are sometimes referred to a the Mexican husk tomato because of the dry, leafy husk that surrounds the fruit. That dry, leafy husk is easily removed revealing a bright green fruit. The bright green fruit, however, is covered in a sticky residue. The residue is the fruit’s natural defense against insects. It contains chemicals that repel the insects. Before using the tomatillos, it’s a good idea to rinse the residue off. 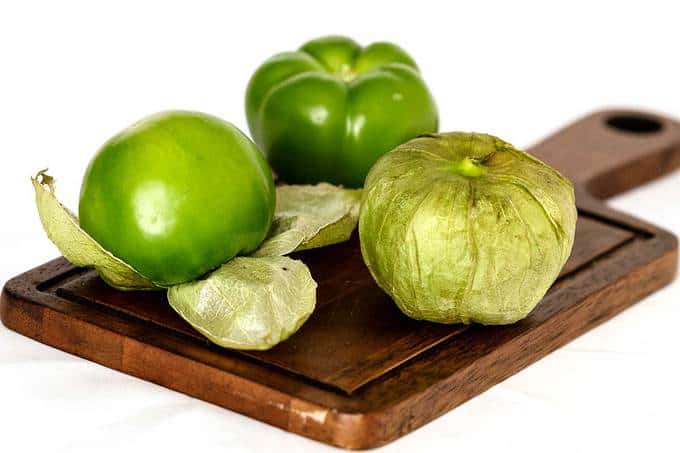 I used the following ingredients for this delicious salsa: Tomatillos, jalapeño peppers, onions, garlic, cilantro, ground cumin, salt and fresh lime juice. I also decided to add a teaspoon of granulated sugar to cut down on the tartness of the Salsa Verde. 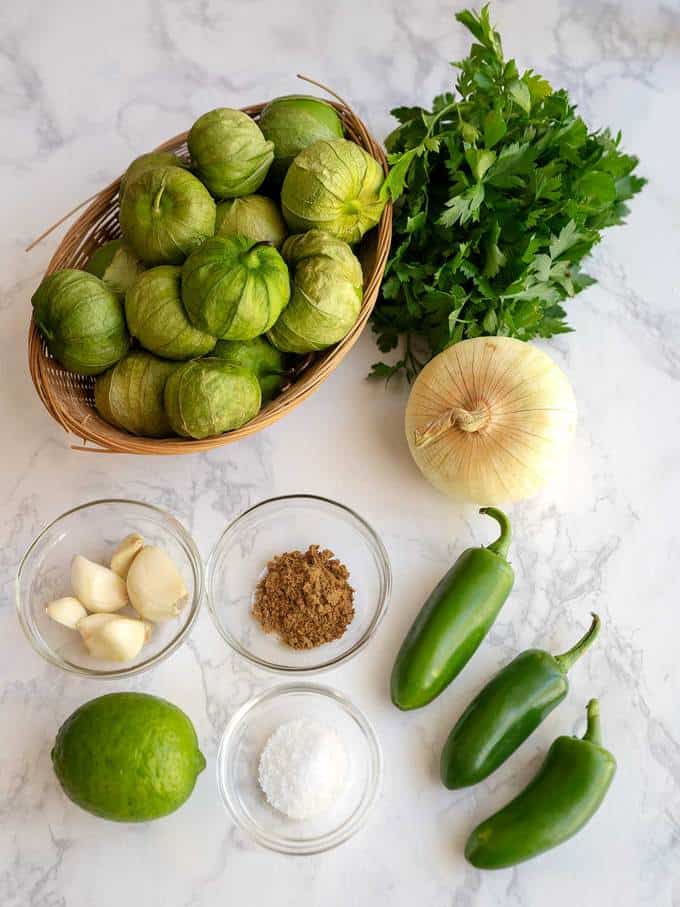 Roasting the Vegetables for the Salsa Verde

I started by preparing the vegetables. First, I peeled the husk off of the tomatillos and rinsed them well to remove the sticky residue. Then, I cut them into quarters and placed them on a foil lined baking sheet.

After that, I peeled the onion and cut it into quarters. I placed the onion quarters on the same foil lined baking sheet.

Finally, I peeled the garlic cloves and placed them on the baking sheet. 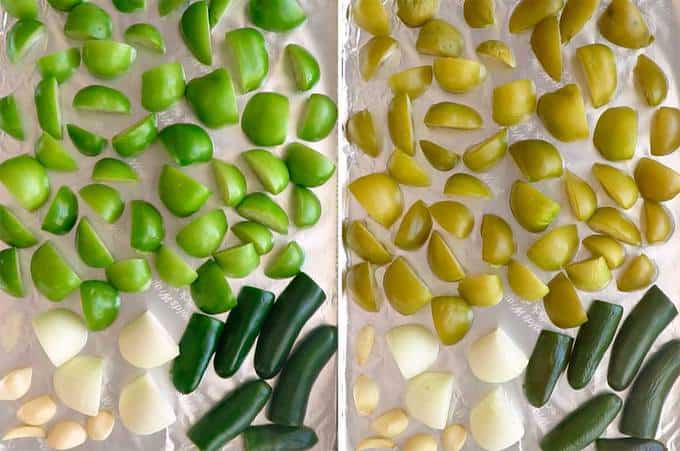 Once the vegetables had been roasted and cooled, I placed them in my food processor fitted with a steel blade. Then I added the cilantro, ground cumin, salt, sugar and fresh lime juice.

I pulse processed the salsa about 12 times. After 12 times, the salsa was perfect for me – still a bit chunky. You could certainly process it further to produce a less chunky salsa. 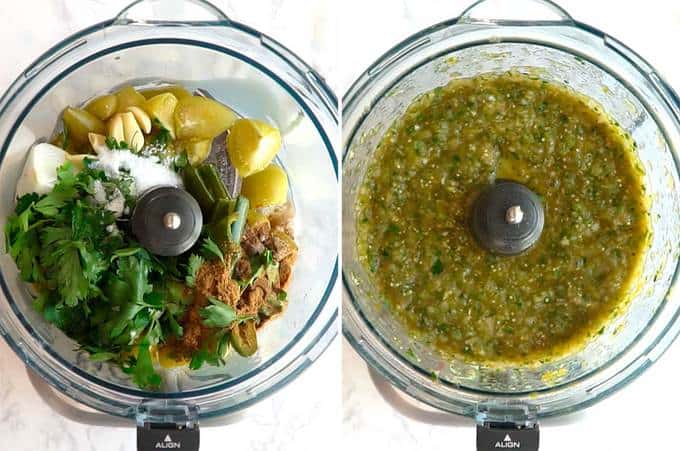 The Salsa Verde was amazing right after it was made. It was even better after being refrigerated to allow the flavors to blend together. Thank you Grits and Pinecones for an awesome recipe! 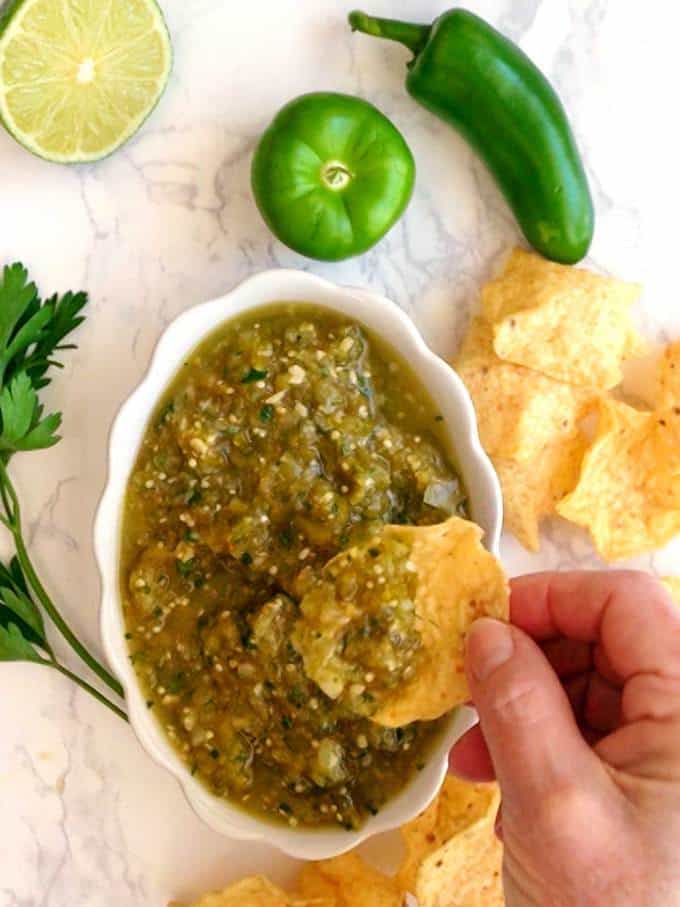 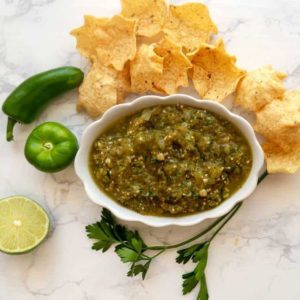 Salsa Verde (from Grits and Pinecones) 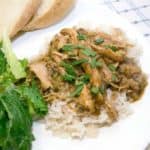 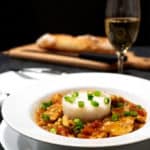 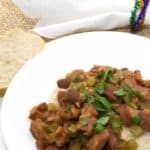