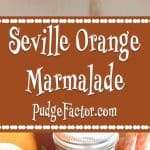 Seville Orange Marmalade is prized in Great Britain. Legend has it that, this perfect marriage of the intensely bitter Seville oranges and the sweetness of sugar occurred by accident in the early 1700’s in Scotland. 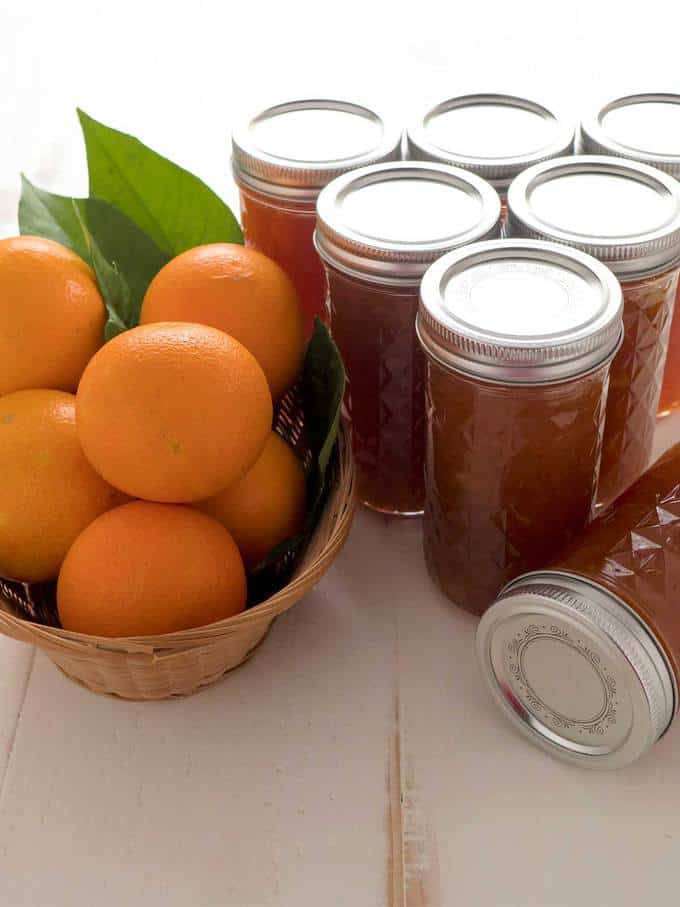 According to the legend,the current day marmalade was invented in Dundee, by the wife of James Keiller, a local grocer. Keiller bought a load of discounted, and unsellable, oranges from a storm blasted cargo ship from Seville, Spain. Because the oranges were so bitter, the grocer’s frugal and ingenious wife Janet used them instead of her normal fruit to make pots of preserves. Voila – Dundee Seville Orange Marmalade was born!  The Seville Orange Marmalade proved to be so popular that the Dundee public demanded more and more. The Keiller’s obliged, and continued producing the marmalade. Several generations later, in 1797, another Mrs. Keiller and her son James built the world’s first marmalade factory. And now, you know the rest of the story.

My Seville Orange Marmalade is not the typical variety. Yes, I do use Seville oranges. However, I double the amount of fruit, and cut the amount of sugar in half. The reason for the reduced sugar is that I make the marmalade according to the Master Taste Tester’s preference. He argues that the intense orange flavor shouldn’t be masked by excessive sweetness.

You may be wondering how I got my hands on Seville oranges. The answer is that several Seville orange trees grow here in Downtown Pensacola, around the aptly Seville Square, in the local Historic District. They were planted over a century ago, and every year produce an abundant crop of Seville oranges. Some years back, when I told the Master Taste Tester that I could get some Seville oranges that were grown locally, he requested that I put my culinary skills to work and produce marmalade. Over the years, he has proclaimed my marmalade as “magnificent,” especially if it ripens for several years into a vintage masterpiece. 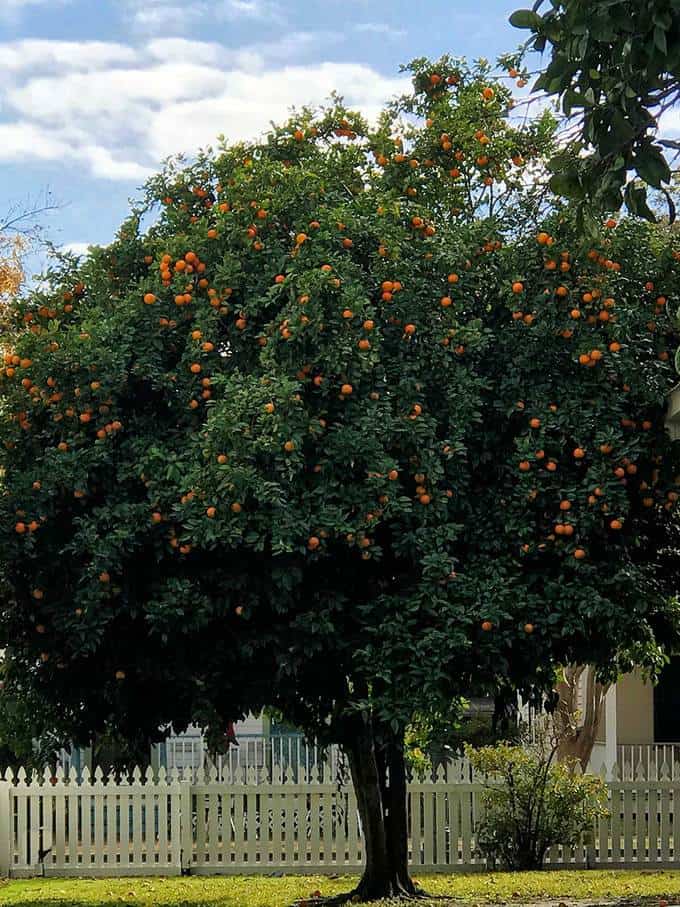 I use the following four simple ingredients for Seville Orange Marmalade: Seville oranges, lemons, water, and sugar. This year, since we had an abundant crop of “sweet” oranges, I tried fresh squeezed orange juice in place of the water. It worked, but was not necessary. 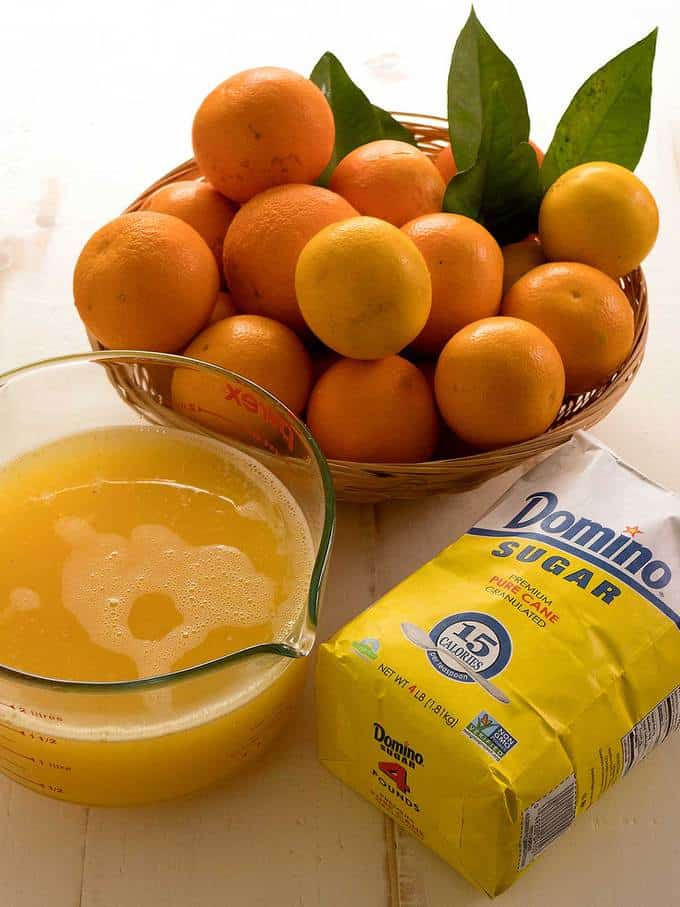 It’s not difficult to make marmalade. However, it is quite time-consuming. I started by juicing the oranges. Fortunately, I have an electric juicer. I placed the numerous pips or seeds and piths from the oranges into pieces of cheesecloth tied with a piece of twine. You may have noticed that I didn’t include pectin as an ingredient. The reason is that the seeds and pith are rich in pectin and provide all that is necessary. 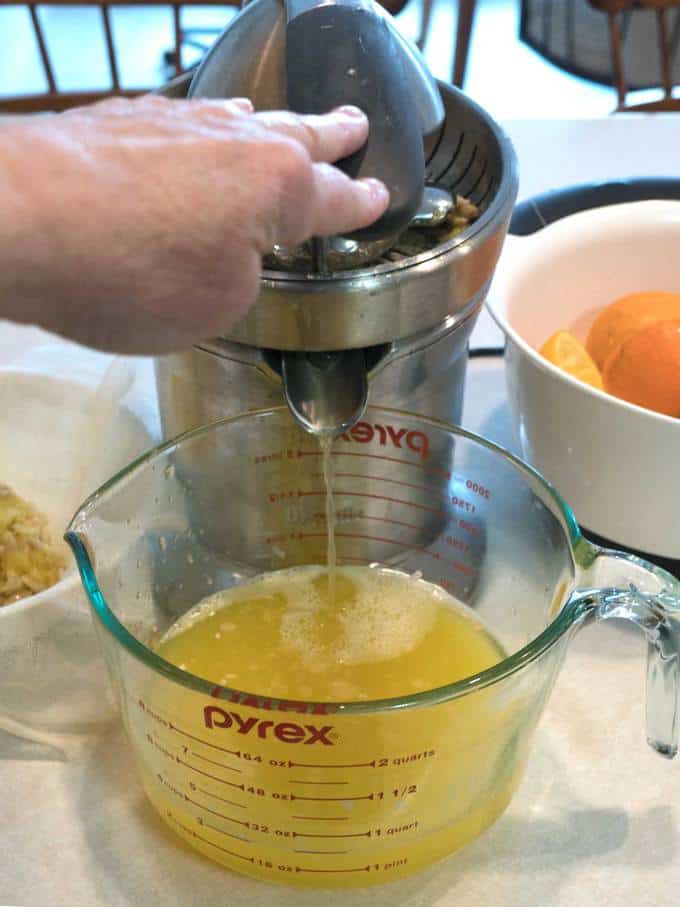 Next, I used my food processor fitted with a steel blade to cut the fruit skins into coarse pieces. I did this in several batches. Traditionally, one should use a knife to cut the skins into thin strips. However, from my perspective, the food processor does a fine job of producing coarse cut marmalade, and is way easier! 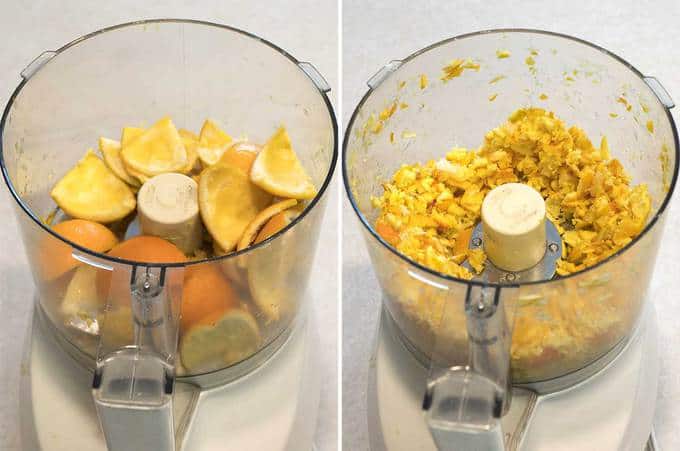 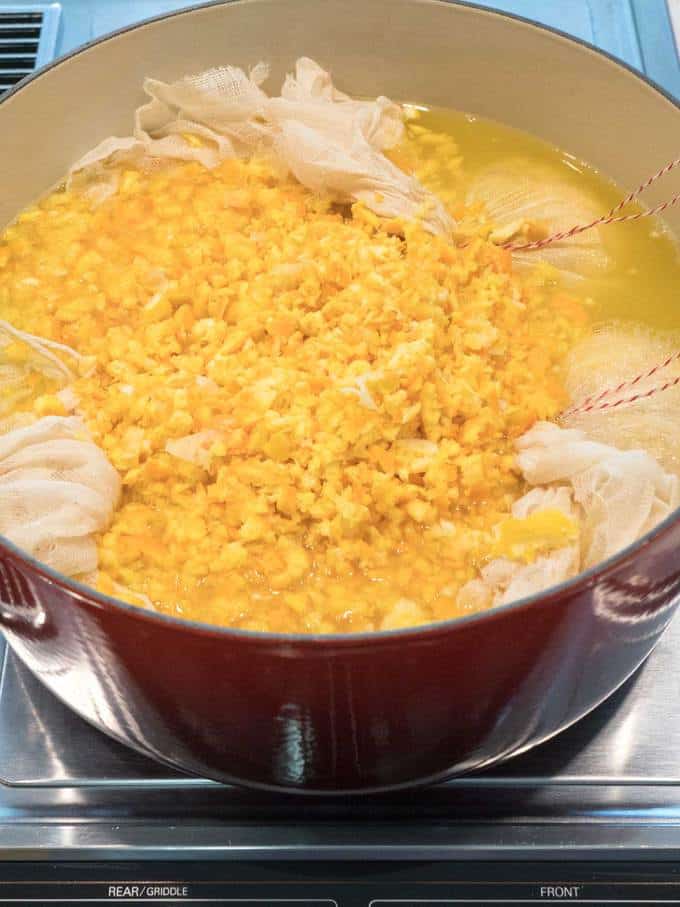 Next, I brought the mixture up to a simmer over medium heat and then lowered the heat to medium low. I simmered the mixture for around two hours until the peel was tender to the touch. After two hours, I removed the cheesecloth bags and let them cool for a bit. Meanwhile, I added the sugar and stirred the mixture over medium low heat until all of the sugar had dissolved. This is a critical step. 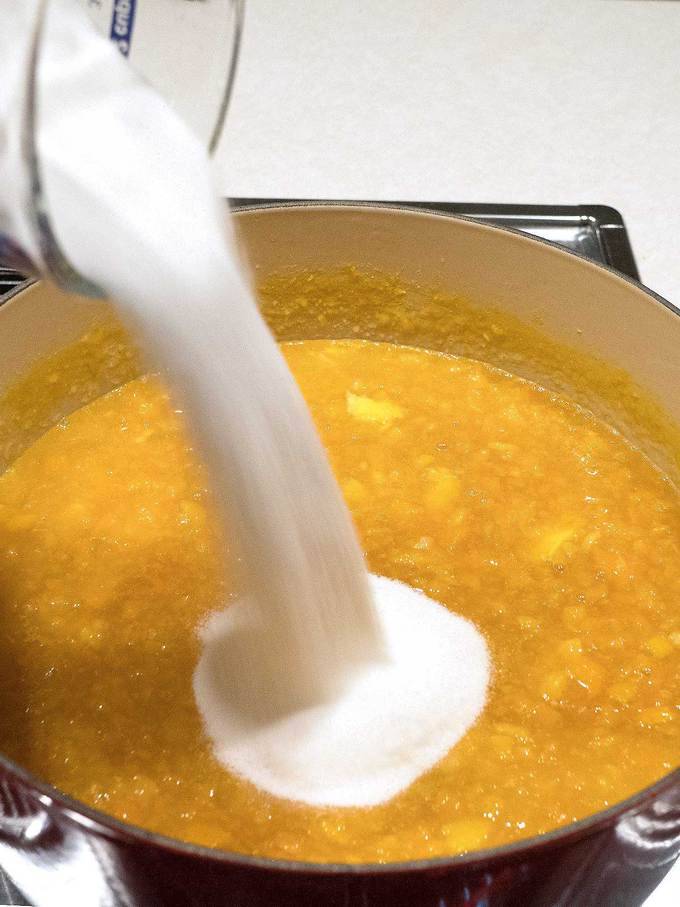 Back to the cheesecloth bags. Once they had cooled, I started the really messy part of extracting as much pectin as possible. First, I pressed them with the bottom of a small saucer. Then, I used my hands to press as much pectin as I could from the bags. I added the pectin to the marmalade mixture. 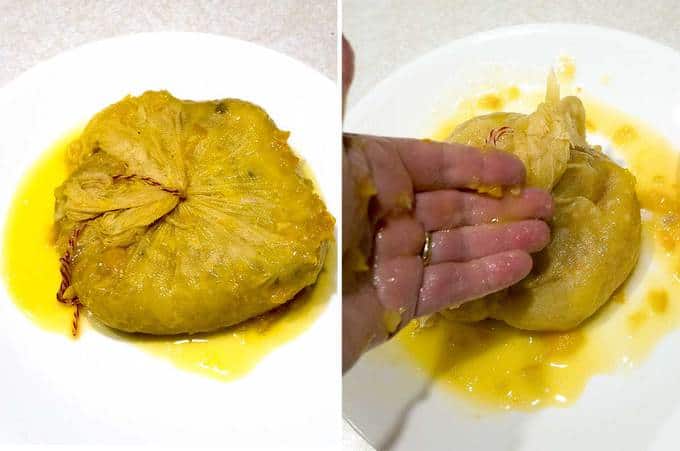 Once the sugar had dissolved and the pectin had been added, I turned the heat up to high to begin the setting stage. When the mixture reached a full boil, I let it cook for 15 minutes, stirring frequently. After 15 minutes, I put a small amount on a saucer that had been in the freezer. After it cooled a bit, I pushed the mixture with my finger to see if it wrinkled. The wrinkling is an indication that the marmalade has set. Fifteen minutes was not enough, so I continued cooking the mixture, in 10 minute increments, until it wrinkled, which is around 220° F on a candy thermometer. Overall, it took 45 minutes for the mixture to property set. 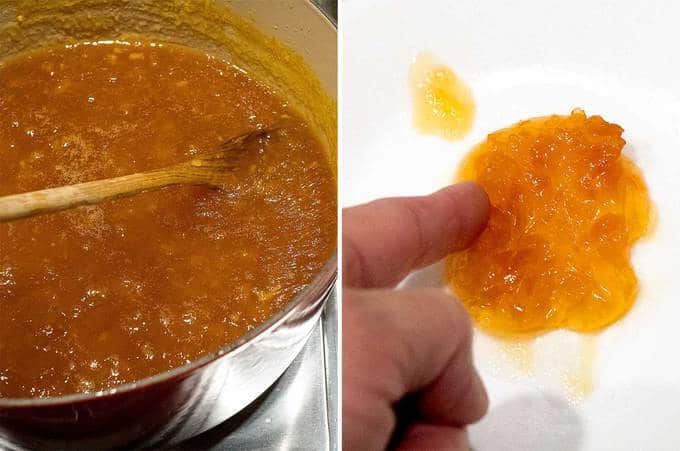 I let the marmalade cool for about 10 minutes before putting it into sterilized mason jars and screwing on the tops. Because the marmalade was still hot, the jars sealed themselves. I ended up with nine 12-ounce jars of incredible Seville Orange Marmalade. Because the Master Taste Tester really likes the vintage variety, some of it will be stored in a cool dry place for several years to age. The rest will served at breakfast or eaten as a midnight snack on toast. Yum! 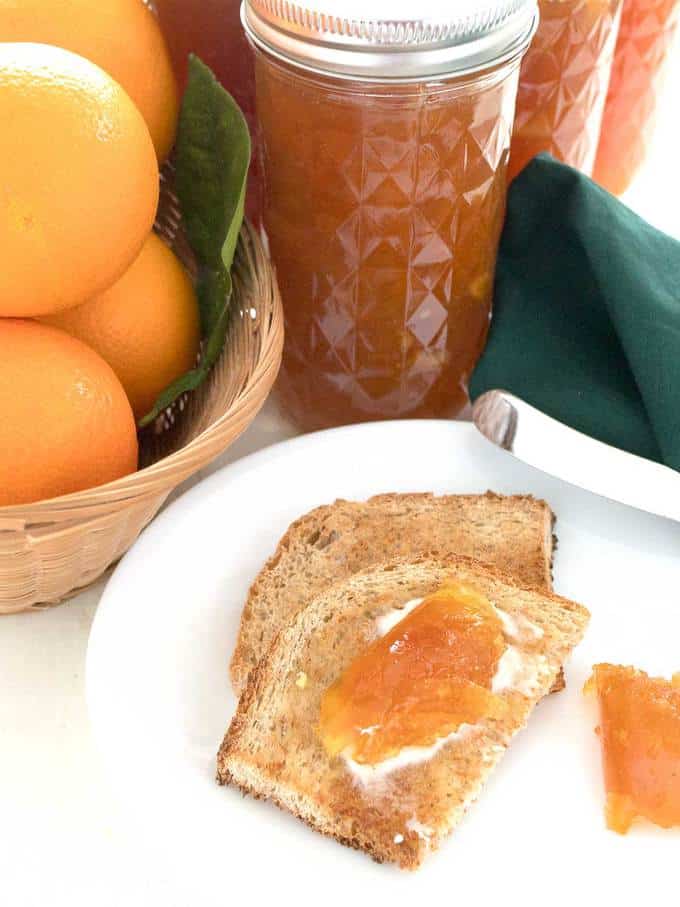 If you’re looking to use this recipe in something really tasty, why not try my Coconut Shrimp with Orange Marmalade Dipping Sauce. Or for some more yummy citrus spreads, check out my Classic English Lemon Curd.

I hope you liked this recipe for Seville Orange Marmalade as much as I do. If so, please consider rating it and leaving a comment. Also, if you’d like to receive notifications of new posts by email, enter your email address in the Subscribe box. 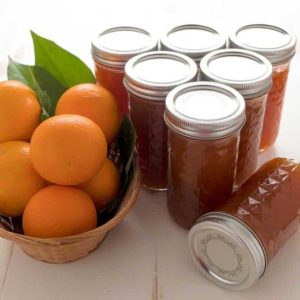 Calories: 62kcal | Carbohydrates: 16g | Potassium: 48mg | Sugar: 15g | Vitamin A: 55IU | Vitamin C: 14.4mg | Calcium: 11mg
Tried this recipe?Please leave a comment below and/or give this recipe a rating. On Instagram? Take a picture and tag @pudgefactor or #pudgefactor.