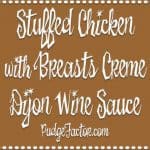 For an elegant meal, try these tender, juicy chicken breasts stuffed with mushrooms and leeks and topped with a delicious crème Dijon wine sauce. The uncooked stuffed chicken can be made ahead of time, and refrigerated. Cook it 30 minutes before dinner for a five-star restaurant quality meal. 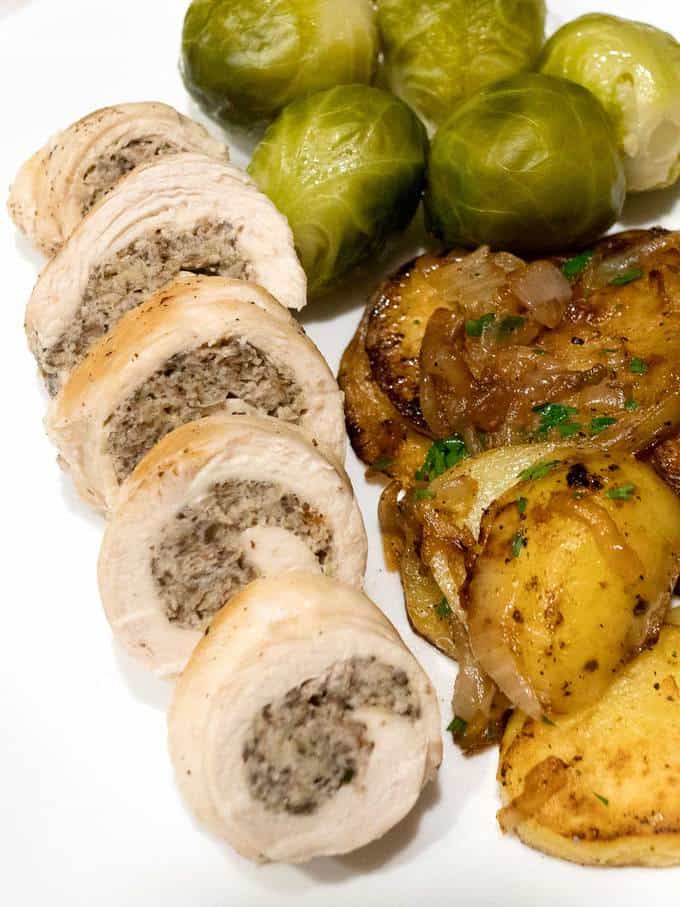 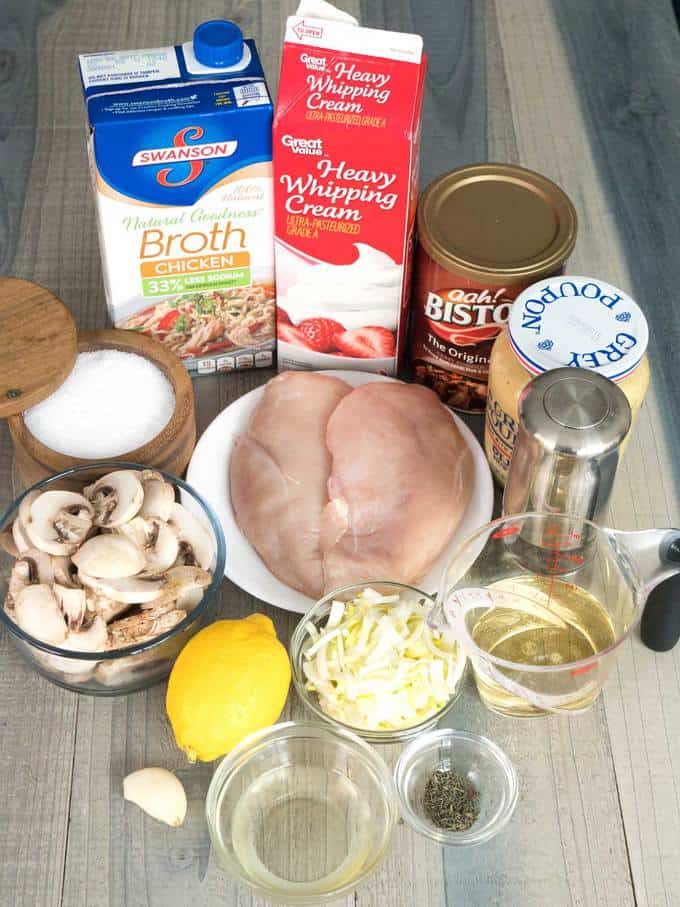 First, I butterflied each chicken breast by cutting them horizontally to about ½-inch from the edge with a sharp knife. I wanted to make sure that the halves remained attached. 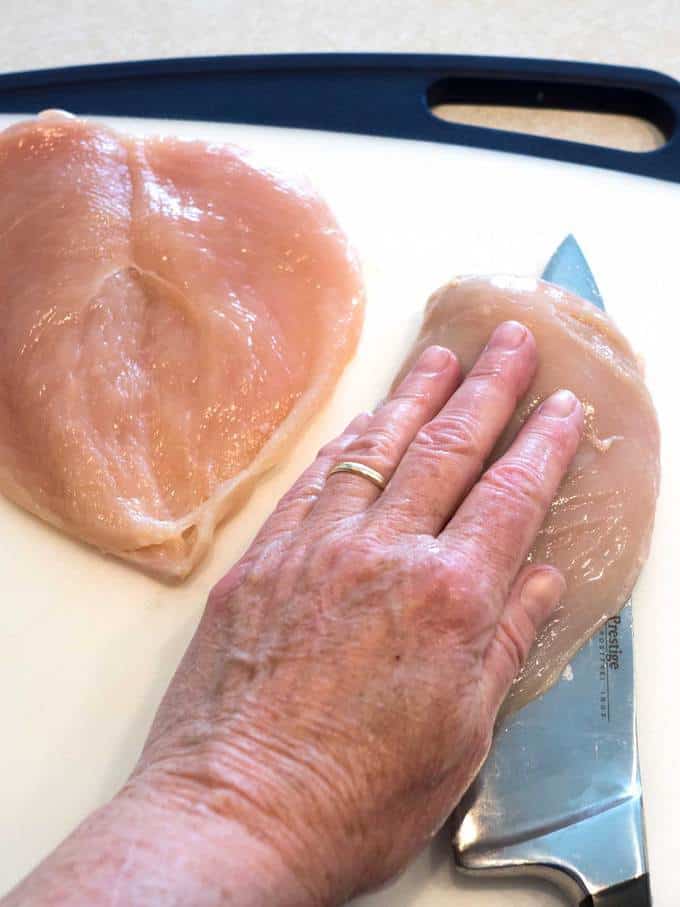 Next, I placed each breast in a ziploc bag, and pounded it to a thickness of about ¼-inch. Then, I trimmed about ½-inch from the long sides of the chicken breast. I ended up with a piece of chicken that was roughly 8-inches long and 5-inches wide. I saved the trimmings to use in the stuffing. 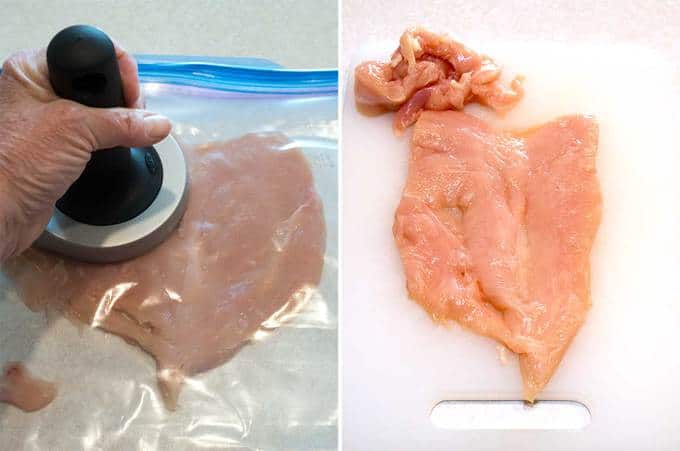 First, I added the chicken trimmings to my food processor fitted with a steel blade, and processed it for about 20 seconds until it was smooth. Then, I transferred the trimmings to a bowl. 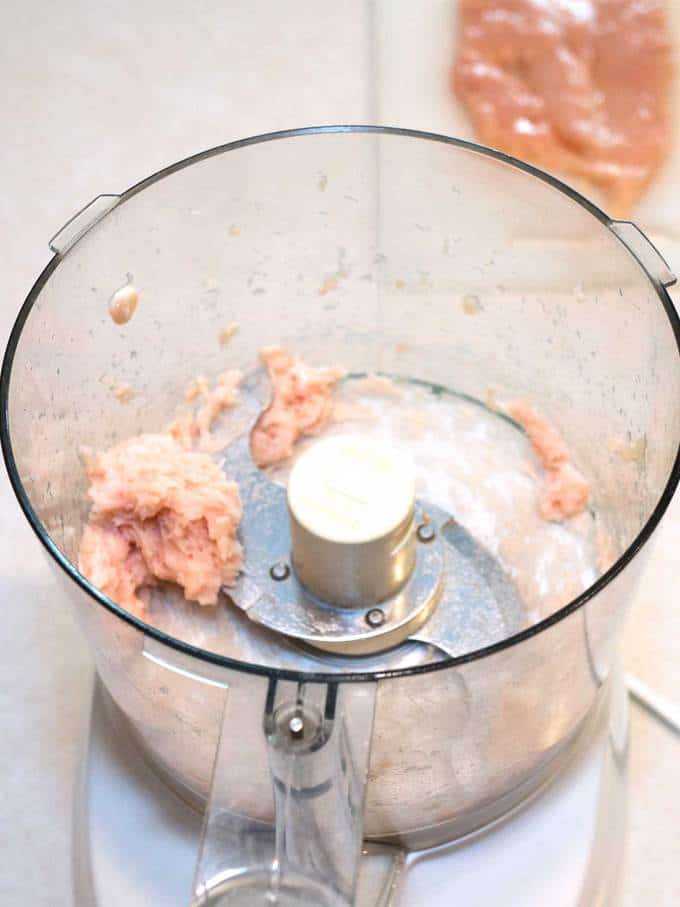 Next, I heated some oil in a skillet over medium high heat and added the mushrooms. I cooked the mushrooms, stirring occasionally until all of the moisture had evaporated. This took about 5 minutes. Then, I added the leeks to the skillet, and continued cooking the mixture until the leeks were softened. This took a couple of minutes. Finally, I added the garlic and thyme and cooked the mixture until the garlic was fragrant. 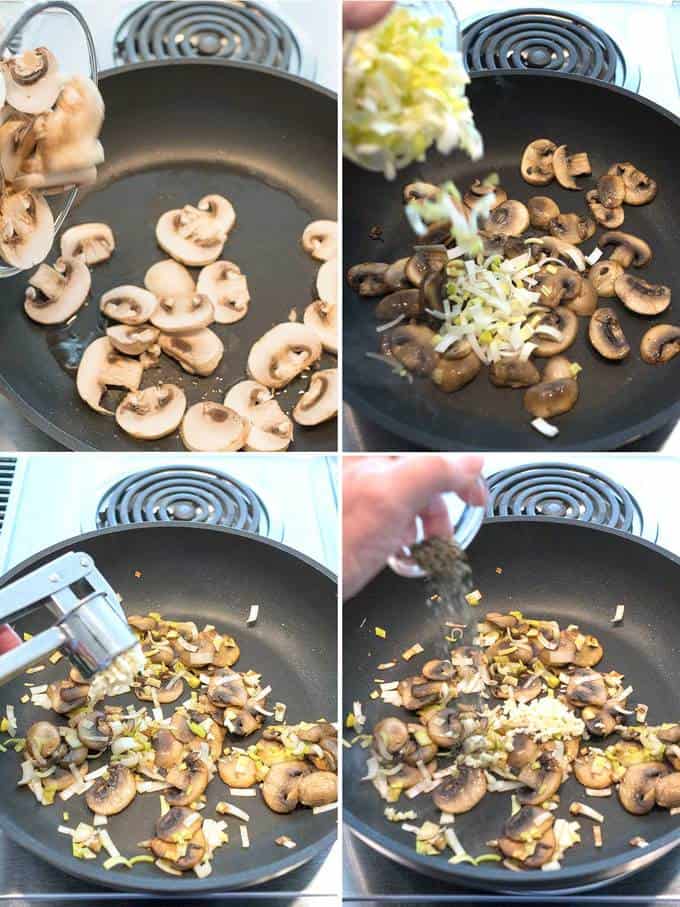 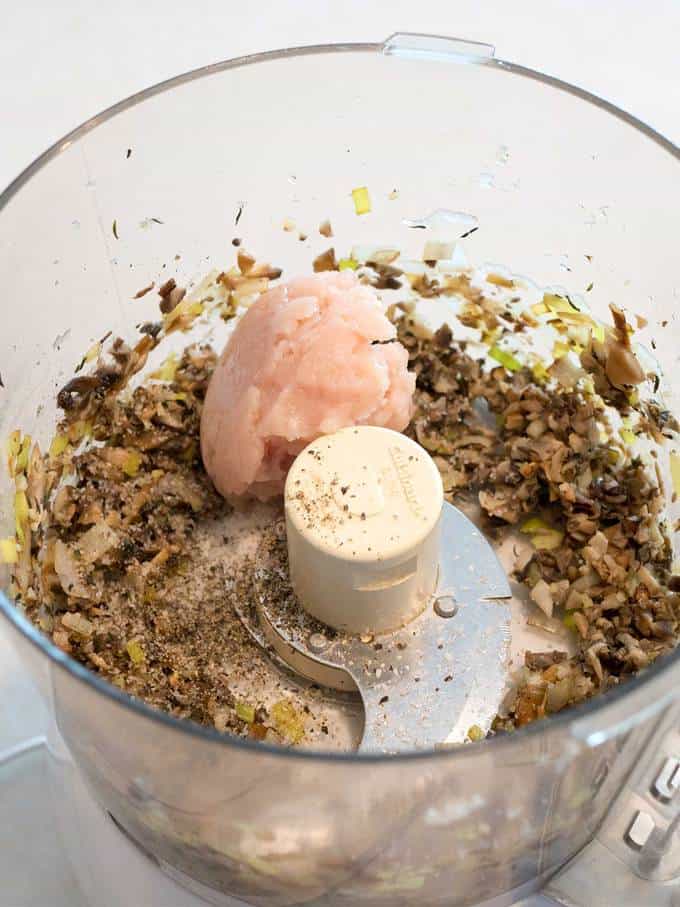 Meanwhile, I returned the skillet to the heat, added the wine, and scraped up the browned bits. I transferred the wine to a small bowl, and set it aside. 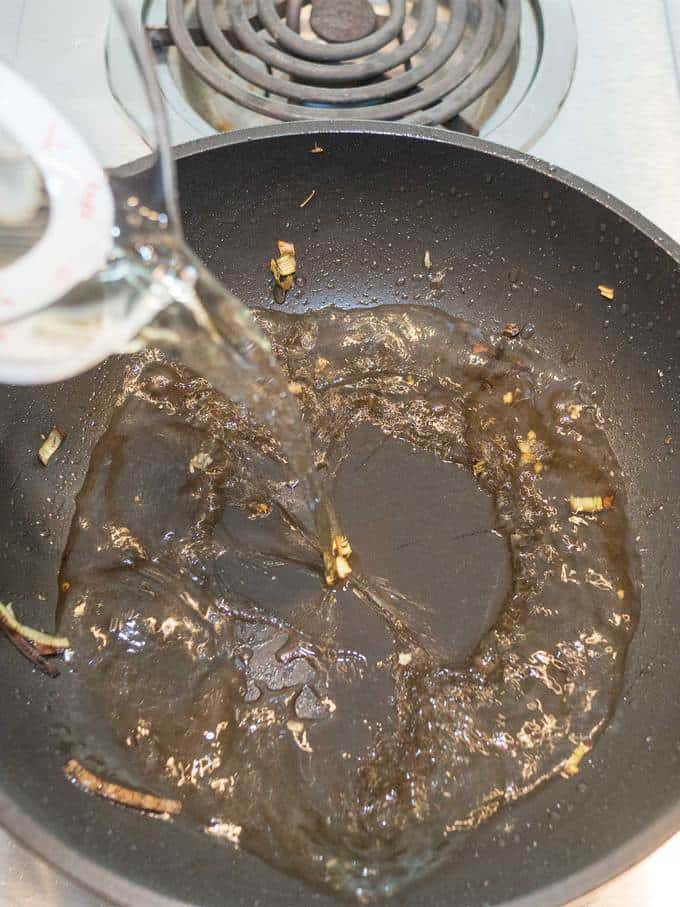 To stuff the chicken, I spread about half of the stuffing evenly over one of the pieces of chicken. I left about a half-inch border along the short sides and one of the long sides. Then, I rolled the breast up as tightly as possible, starting at one of the shorter ends. With the seam side down, I placed three pieces of kitchen twine under the breast, tied the twine, and trimmed the excess. At this point, I put the uncooked stuffed chicken breasts in the refrigerator with the view that I would cook them later. 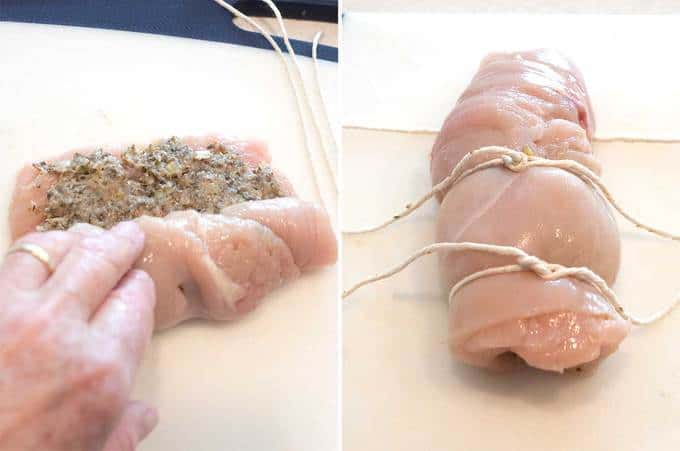 First, I seasoned the chicken with salt and freshly ground black pepper. Then, I heated the remaining tablespoon of oil in a 12-inch skillet over medium high heat, and added the chicken. I browned the chicken on all four sides. Next, I added ¾ cup of the chicken broth and reserved wine to the chicken, and brought the liquid to a boil. I reduced the heat to low, covered the skillet, and cooked the chicken until it registered 160° F on an instant read thermometer. This took about 15 minutes. Next, I transferred the chicken to a cutting board and loosely tented it with aluminum foil. 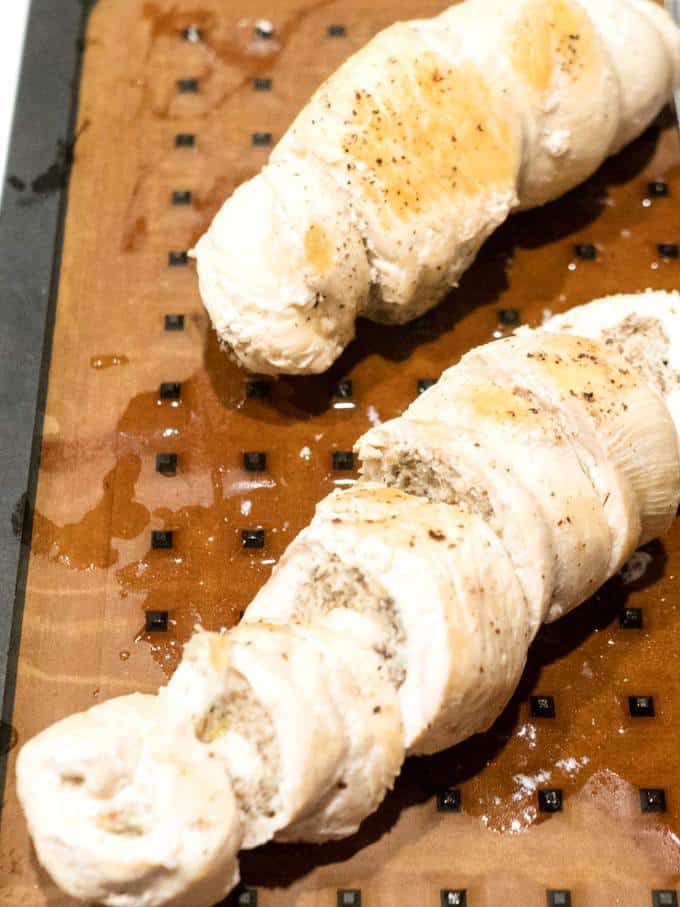 I started by whisking the Dijon mustard and lemon juice into the cooking liquid. Then, I increased the heat to high and boiled the liquid until it was reduced to about ½ cup. This took about 10 minutes. Next, I added the cream and remaining chicken broth mixed with Bisto. When the mixture thickened, I removed it from the heat, and tasted to see if it needed more salt and freshly ground black pepper. It was perfect as was! 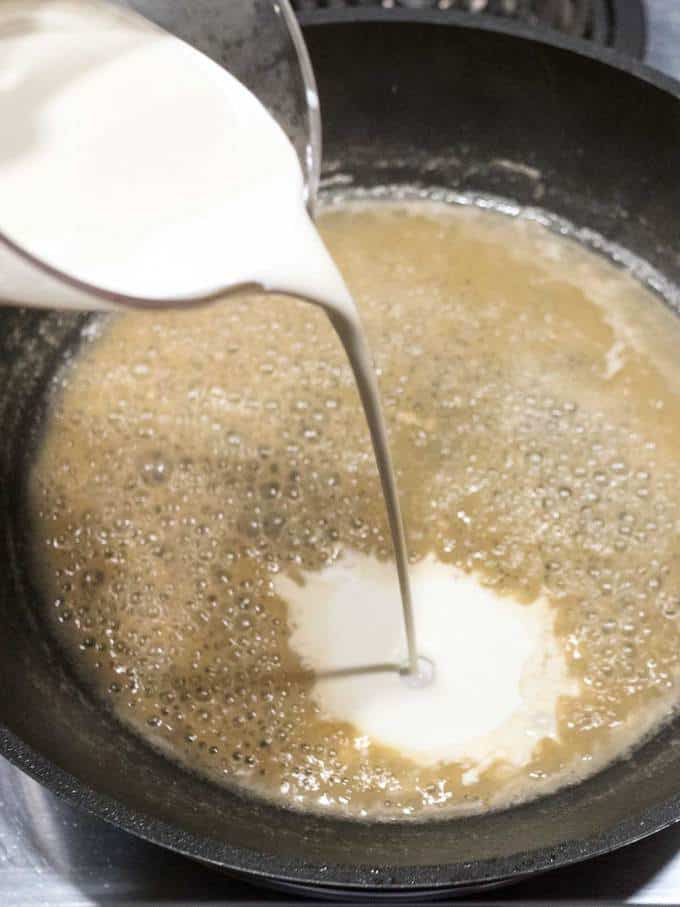 Finally, I removed the cooking twine, and cut each chicken bundle on the bias into 1-inch medallions. I poured the sauce over the chicken, and served it with Potatoes Lyonnaise and fresh steamed Brussel sprouts. Yum! 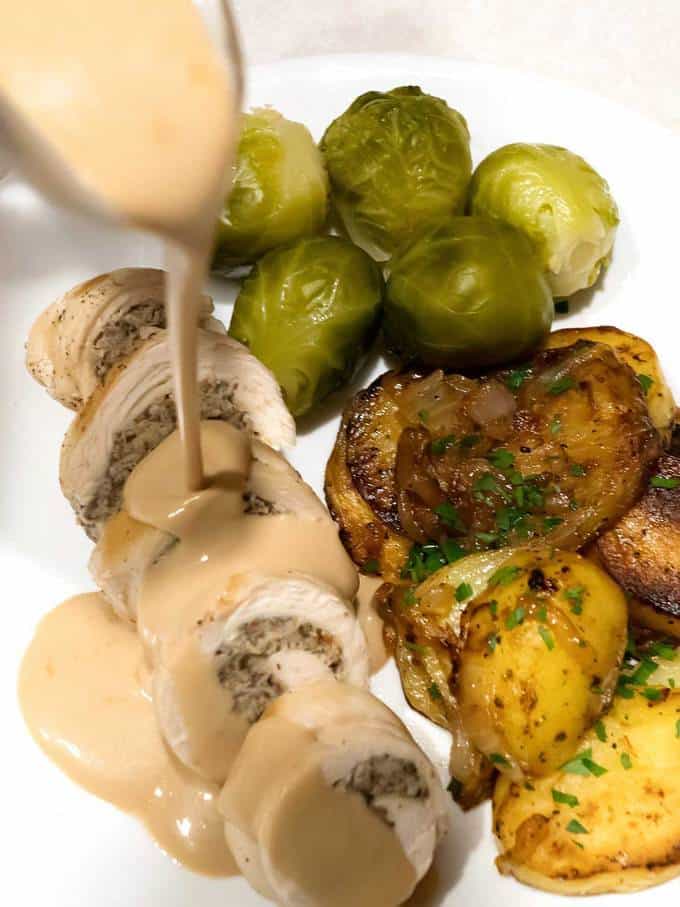 I hope you liked this recipe for Stuffed Chicken Breasts with Crème Dijon Wine Sauce as much as I do. If so, please consider rating it and leaving a comment. Also, if you’d like to receive notifications of new posts by email, ever your email address in the Subscribe box. 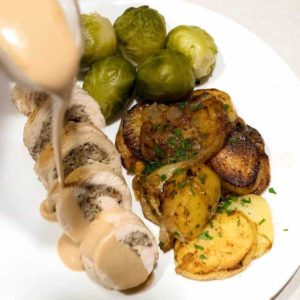 To Assemble and Cook

To Make the Sauce and Serve