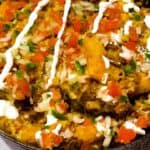 Totchos or Tater Tot Nachos (sometimes called Tachos) are an amazing twist on a traditional recipe where crispy tater tots replace tortilla chips. Add the same toppings that you’ve come to love with nachos and you have an appetizer that is perfect for you game day or holiday festivities.

Before putting the Totchos together, I needed to do a bit of prep.

Once the tater tots were a crispy golden brown, I removed them from the oven and set them aside.

Here’s How I Put the Totchos Together

Now that the tater tots and taco meat were nicely cooked, it was time to build the Totchos.

Talk about good! The Totchos or Tater Tot Nachos were amazing. The tater tots were perfectly complimented by the taco meat, melted cheese and toppings.

If you are a tater tot fan like I am, you should definitely give this recipe a try. Yum!

Can the Totchos be made on baking sheet rather than in a cast iron skillet.

The Totchos should be made in an oven-proof dish. This would include a rimmed baking sheet.

What cheese substitutes work well in this recipe?

What other toppings go well with this recipe?

What’s the best way to serve the Totchos?

With the tater tots, these Tater Tot Nachos are similar to a casserole. This means that it’s easier to use a spoon to dish out the Totchos and eat with a fork.

If you’re a fan of tater tots like I am, you should definitely check out these recipes.

If you liked this recipe for Totchos or Tater Tot Nachos as much as I do, please consider rating it and leaving a comment. Also, if you’d like to receive notifications of new posts by email, enter your email address in the Subscribe box. 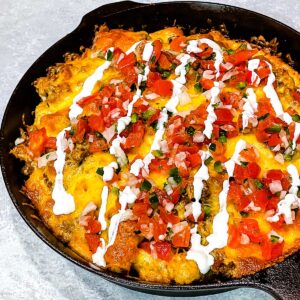