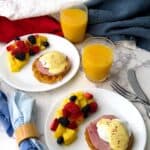 Eggs Benedict on Tater Tot Waffles are the ultimate in decadence that are certain to become the star of your breakfast or brunch table. Crispy Tater Tot Waffles replace the traditional English muffins to provide an amazing crunch and taste to this otherwise traditional fare. This awesome dish is finished with the easiest blender Hollandaise sauce that you could ever imagine.

Here’s What You’ll Need for This Amazing Recipe

Here’s How I Made the Tater Tot Waffles

It turns out that 11 tater tots is the perfect amount to make the mini waffle.

Because the Tater Tots contained a fair amount of oil, I didn’t need to spray the mini waffle maker with non-stick spray.

Here’s How I Made the Hollandaise Sauce

Making the Hollandaise sauce was super simple and foolproof using a blender.

The reason for using the funnel was two-fold. First, it kept the blender ingredients from spewing out when the blender was running. Second, and more importantly, the funnel made it easy to drizzle in the butter.

In about twenty seconds, I had a perfect Hollandaise sauce!

I placed the blender in warm water to keep the Hollandaise sauce warm while I poached the eggs.

Since it’s just the two of us, I only made two Eggs Benedict on Tater Tot Waffles. This means that I only need two poached eggs!

First, and perhaps most importantly, the egg should be as fresh as possible. The reason is that as the egg ages, the white becomes more watery and therefore spreads more quickly when added to hot water. The result is a poorly formed poached egg.

Second, adding about a teaspoon of vinegar to the water causes the white to congeal more quickly (there’s science involved here, but just take my word for it!). This in turn helps to produce a perfectly shaped poached egg.

Finally, the water depth only needs to be about an inch. It can be deeper, but the added depth isn’t really important.

Given this, I heated water with the addition of vinegar over medium heat in a small skillet to a simmer.

I’m not nearly as practiced in making poached eggs as the Master Taste Tester who cracks the egg directly into the hot water. Therefore, I like to crack the egg into a small bowl and slide the egg into the water from the bowl.

I removed the poached eggs from the water with a slotted utensil and placed them on paper towels to drain well.

Putting It All Together

Now that the tater tot waffles, poached eggs and Hollandaise sauce were made, it was time to put the Eggs Benedict on Tater Tot Waffles together.

I started with the tater tot waffle on a place. Then I added the ham that had been cut into a 3 ½-inch circle. Next, I placed a poached egg on top of the ham. Finally, I spooned on some of the Hollandaise sauce.

Before serving the Eggs Benedict on Tater Tot Waffles, I sprinkled on some paprika for color.

I served the Eggs Benedict on Tater Tot Waffles with some fresh fruit and orange juice.

The Eggs Benedict on Tater Tot Waffles were amazingly delicious. The tater tot waffles are crispy and crunchy, providing a perfect replacement for the traditional English muffin. Yum!

Is there a substitute for the ham?

Canadian bacon is traditionally used in Eggs Benedict, so that would be a perfect substitute. You can also use bacon or even smoked salmon.

Can the poached eggs be made ahead of time?

Can the Hollandaise sauce be made ahead of time?

If served with breakfast, I like to add some fresh fruit. If served for brunch, either fresh fruit or a simple salad goes well.

If you’re interested in other delicious recipes to serve for breakfast or brunch, try these:

I hope you liked this recipe for Eggs Benedict on Hash Brown Rounds as much as I do. If so, please consider rating it and leaving a comment. Also, if you’d like to receive notifications of new posts by email, enter your email address in the Subscribe box. 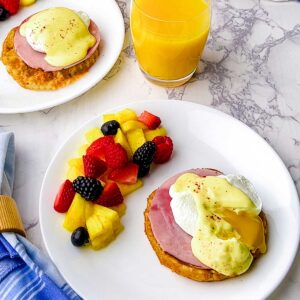