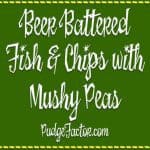 Beer Battered Fish and Chips with Mushy Peas is a favorite pub meal. Add homemade tartar sauce, and you have a true winner! Traditionally, either cod or haddock is the fish of choice. However, any large flaked white fish will work.

Fish and chips with mushy peas is my favorite pub meal. This is odd given that I don’t like fish. However, with the freshest fish and three ingredient crispy beer batter, it’s hard to beat. Chips are french fries. Mushy peas are dried marrowfat peas that are soaked in water with baking soda, rinsed in fresh water and simmered with a bit of salt until they form thick mushy peas.

Early in the day, I covered the dried peas and a bit of baking soda with some water. I brought the water to a boil, covered the pan, and let the peas soak in the hot water for at least two hours.

About an hour before the meal, I drained the peas, rinsed them well, and covered them with fresh water. I added some salt and brought them to a boil. Then, I lowered the heat to low, covered the pan, and simmered the peas until they formed a thick mushy mash.

I only used four ingredients for the delicious beer battered fish: Fish (I used scamp), all-purpose flour, salt, and beer. In honor of St. Patrick’s Day, I used Smithwick’s Irish Ale for the beer. However, any ale type beer will work.

I made the beer batter about three hours before I was going to cook the fish by whisking together the flour, salt, and beer.

When it was time to cook the fish, I heated peanut oil in a dutch oven to 375° F. I tossed the fish in some plain flour. Then, I dipped it in the beer batter, let the excess batter drip off, and cooked it in the hot oil until it was golden brown. This took 7 or 8 minutes.

I drained the fish on a wire rack set over a baking sheet, and cooked the rest of the fish.

I suppose I could have made my own chips, but erred on the side of convenience and used frozen french fries. All of the pubs that I’ve been to use frozen fries! I cooked them in the oven according to the package directions.

In the end, I had a pub meal fit for a king. The succulent large flake white fish was encased in a crispy beer batter and fried to perfection. The mushy peas were perfectly mushy, and the chips were, well, chips! I added my homemade quick and easy traditional tartar sauce, cocktail sauce, and malt vinegar on the side. Yum! 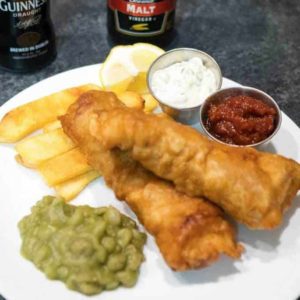