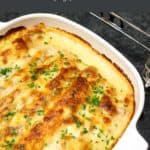 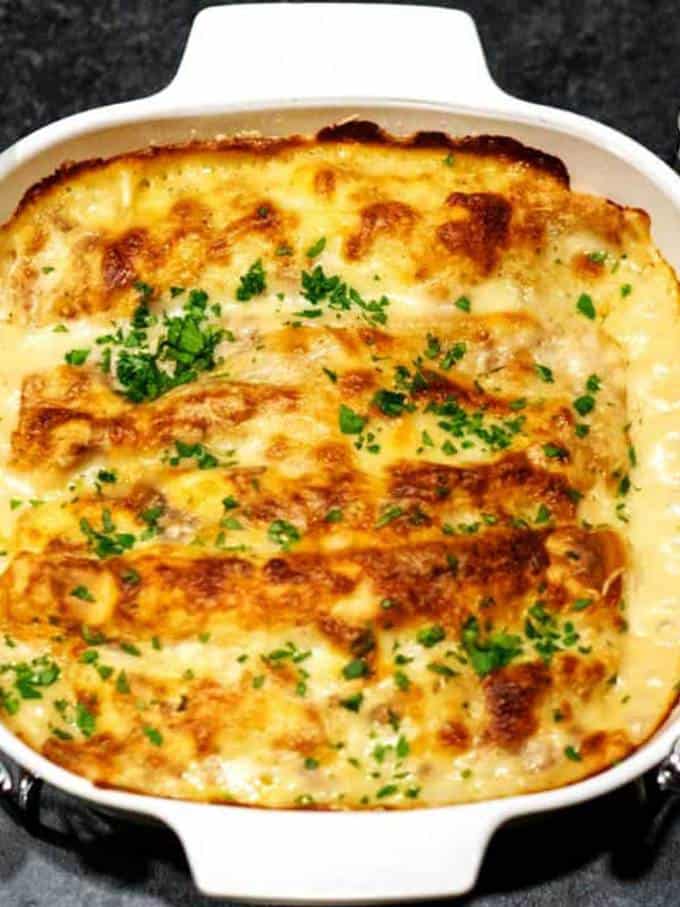 The Chicken Cordon Bleu Crêpes are simple to make, and can be put together ahead of time. In addition, the leftovers, if any can be reheated. They’re perfect for an elegant dinner party or an every-day dinner! 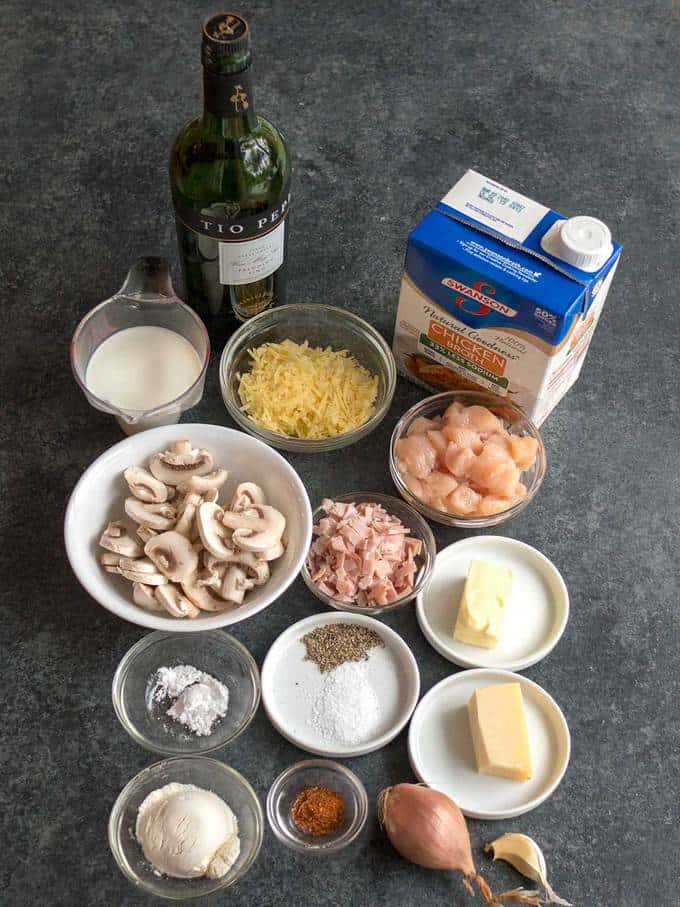 I started by making the crêpe batter that took minutes to put together. First, I added the milk, egg, flour, oil, salt, and sugar to a 2-cup measuring cup. Then, I whisked all of this together a half hour or so before it was time to cook. This gave the batter time to rest.

I always marvel at the Master Taste Tester’s skill in flipping the crêpes high into the air as they are cooking – a trick that he learned when he was a little boy when his mother was out of the kitchen! Watch him make the crêpes in this short video!

Making the Cheesy Sauce for the Chicken Cordon Bleu Crêpes:

With the crêpes made, I turned my attention to making a cheesy white sauce to both bind the filling, and pour on top of the crêpes. First, I whisked together flour and melted butter in a small saucepan over medium heat for about 2 minutes. Then, I slowly added hot chicken broth, and continued whisking until the sauce had thickened. Next, I added the salt and pepper, and whisked to combine. Finally, I added the milk.

Once the sauce had thickened, I added the shredded Gruyère cheese. I whisked the sauce until the cheese had melted. 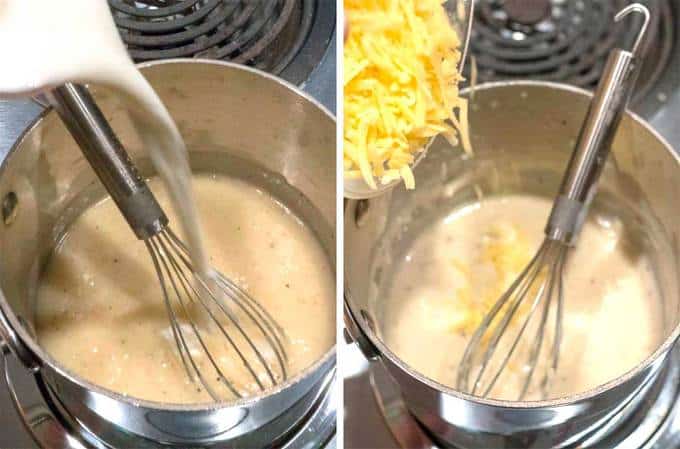 Making the Filling for the Chicken Cordon Bleu Crêpes:

I started by soaking the chicken in a mixture of baking soda and water for about 15 minutes. The reason for doing this was to ensure that the chicken was tender. After 15 minutes, I drained the chicken, rinsed it well, and patted it dry with paper towels. 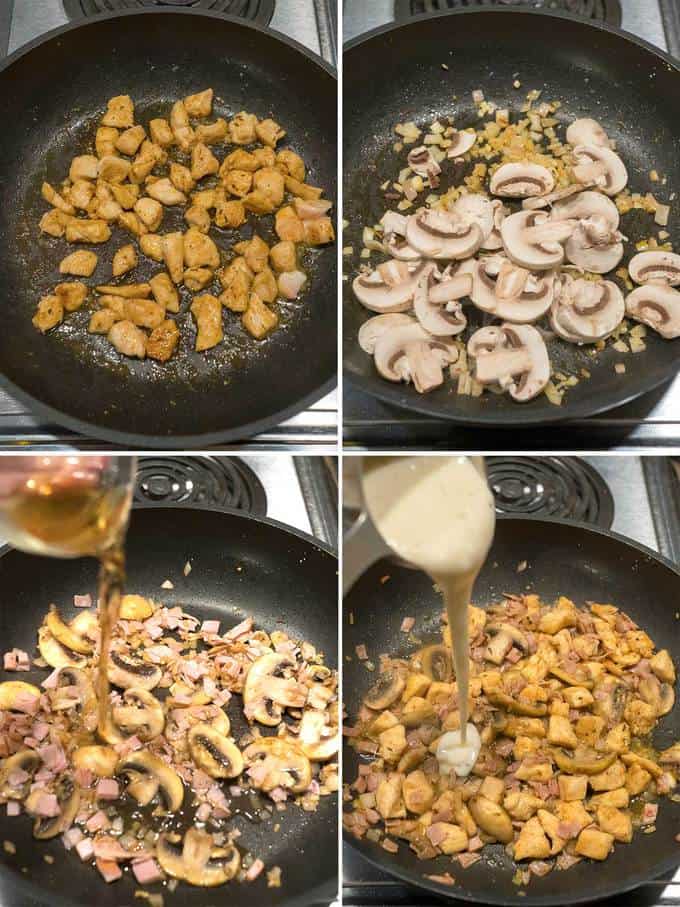 I added about ¼ cup of the creamy filling to the individual crêpes, rolled them up, and place them seam side down in a baking dish. When all of the crêpes had been rolled, I spooned the remaining cheese sauce over the top. I finished the crêpes off with some freshly grated Parmesan cheese. 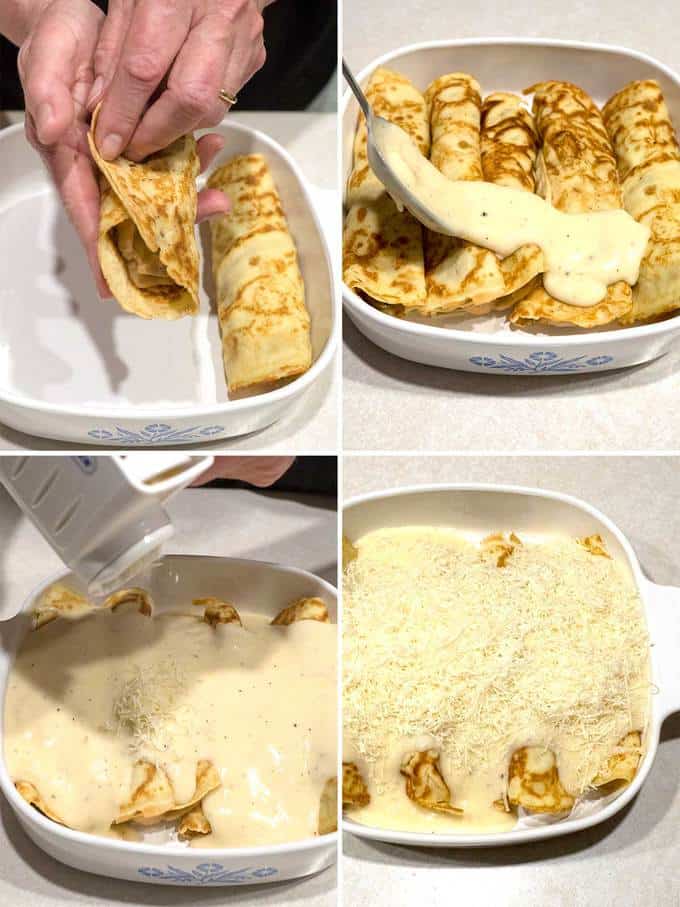 I popped the crêpes into a preheated 400° F oven for about 25 minutes until the mixture was bubbly, and the top golden brown. I hope that you’ll agree that these Chicken Cordon Bleu Crêpes are amazing. Yum! 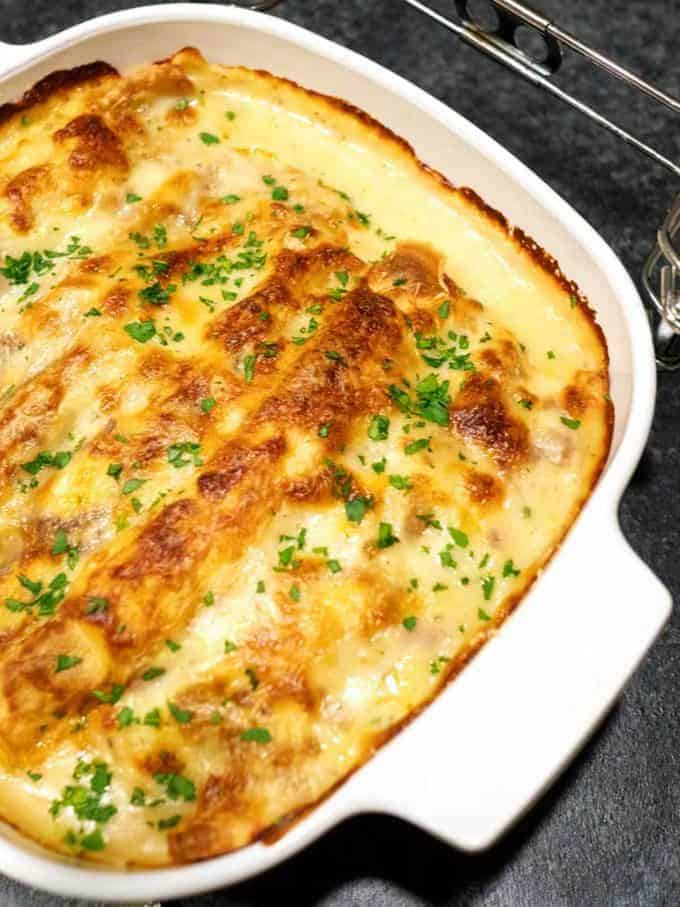 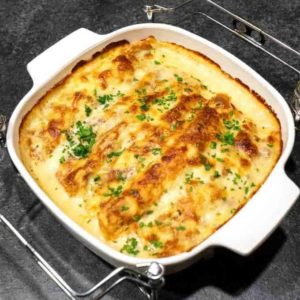 Chicken Cordon Bleu Crêpes are a variation on the traditional Chicken Cordon Bleu. The traditional Chicken Cordon Bleu features chicken stuffed with ham and Swiss cheese, and topped with a sauce. With this variation, I stuff a thin crêpe with an incredible mixture of not only chicken and ham, but also mushrooms and a creamy sauce that includes the melted cheese. As a finishing touch, I top the crêpes with additional creamy sauce and Parmesan cheese.
5 from 4 votes
Print Pin Rate
Course: Main Course
Cuisine: American
Prep Time: 20 minutes
Cook Time: 40 minutes
Resting time for crêpe batter: 30 minutes
Total Time: 1 hour
Servings: 4
Calories: 490kcal
Author: Chula King