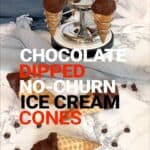 Easy to make Chocolate Dipped No-Churn Ice Cream Cones are a definite winner with both children and adults. The no-churn ice cream initially has the consistency of soft-serve making it perfect for piping into chocolate coated cones. The winning touch is the crispy magic shell coating the ice cream.

Why You’ll Love This Recipe

These Are The Ingredients That You’ll Need

This recipe has three categories of ingredients: the magic shell ingredients, the waffle cones and the no-churn ice cream ingredients.

Steps To Making This Amazing Treat

I turned the egg carton upside down. Then, I made cuts in the bottom of the egg cups using an x-acto knife.

I didn’t worry about being exact here because the cone would enlarge the hole to the right size.

The magic shell is so named because it “magically” hardens into a solid shell when poured over ice cream.

With all of the magic, it only has two ingredients – chocolate chips and coconut oil.

The magic shell is amazingly easy to make – just melt the chocolate chips and coconut oil in 30 second intervals on 50% power in the microwave, stirring between intervals. That’s it!

When I first started making these amazing treats, I used a serrated knife. Then, I learned that kitchen shears worked great.

Because the waffle cones are brittle, I was very careful in cutting them down. I started at the low wrapped point and carefully snipped away.

I didn’t worry about the edges being somewhat ragged. The reason was that the magic shell coating would cover the edges.

Once I had spooned some of the magic shell mixture into the cone, I held the cone horizontally and twirled it to ensure that the entire surface was coated. Then, I poured out the excess mixture.

I placed the cones which were held upright in the egg carton in the freezer for the magic shell to harden. This took about 10 minutes.

I started by beating the cream on high with my electric mixer until soft peaks formed. This took several minutes.

Then, I added the vanilla extract and sweetened condensed milk. I continued beating on high until stiff peaks formed. This took another several minutes.

Because the Master Taste Tester doesn’t like his ice cream too sweet, I tend to use a little more than half of the can of sweetened condensed milk.

I used a pastry bag fitted with a 1M star tip to pipe the ice cream into each of the cones.

Then, I placed the filled cones in the freezer for the ice cream to harden. This took about an hour.

I ensured that both the ice cream and the rough edges of the cone were completely covered. I let the excess magic shell mixture drip off before returning the cones to the egg carton.

It was fun to watch the magic shell harden so quickly after I had dipped the cones!

I placed the chocolate dipped no-churn ice cream cones in the freezer until ready to serve.

The waffle cones were crispy with the chocolate surprise in their coating. The no-churn ice cream was velvety smooth with just the right amount of sweetness. The crowning glory was the crispy magic shell covering the ice cream. Yum!

Should refined or unrefined coconut oil be used?

Can something other than coconut oil be used for the magic shell?

I’ve read that one can use butter in place of coconut oil for the magic shell.

Can store-bought ice cream be used in place of the no-churn ice cream?

You can definitely use store-bought ice cream. In fact, when I first started making these chocolate dipped cones, I used store-bought ice cream. I would let the ice cream soften to the point where it could be piped into the cones. This was somewhat tricky. If it didn’t soften enough, it was difficult to pipe and if it softened too much, it made a mess.
That’s why I really like using the no-churn ice cream – it’s perfect for piping.

Can the ice cream just be scooped into the cone rather than piping it.

If you would prefer not to pipe the ice cream, you can definitely just scoop it into the cones. It may be a bit difficult this way to make sure that the entire cone is filled with ice cream. Also, you likely won’t get the pretty swirls at the top.

Can the ice cream be piped using a Ziploc bag with the corner snipped off?

If you don’t have the piping bags and/or the tip, you can definitely pipe the ice cream using a Ziploc bag with the corner snipped off.

Does using less than the whole can of sweetened condensed milk impact the consistency of the ice cream?

I first started making chocolate dipped cones after purchasing some Hold the Cones from Trader Joes. My Hold the Cone Copycat was such a success that I continued to experiment until I reached perfection.

I hope you liked this recipe for Chocolate Dipped No-Churn Ice Cream Cones as much as I do. If so, please consider rating it and leaving a comment. Also, if you’d like to receive notifications of new posts by email, enter your email address in the Subscribe box. 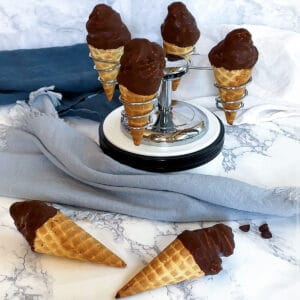