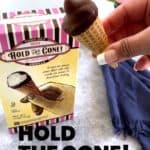 Hold the Cone is a copycat of Trader Joe’s wildly popular mini ice cream cone. Lucious chocolate coats the inside of a mini sugar cone that is filled with an ice cream of your choice. Then, the cone is dipped in a chocolate magic shell that hardens to a firm, glossy shell.

No warm weather day is complete without a delicious ice cream treat. The Hold the Cone is a perfect mini treat for young and old. It is super easy to make and is sure to satisfy your ice cream cravings.

When you don’t want to drive 200 miles to the nearest Trader Joe’s for a box of Hold the Cones, you can stay home and make your own!

About Trader Joe’s and Hold the Cone

Trader Joe’s a specialty grocery chain that carries a wide variety of unique and delicious products. Stores are located throughout the United States.

Unfortunately for me, the nearest Trader Joe’s is 200 miles away to the east and to the west. Therefore, periodically, Susan and I make the 200 mile trek and load up on amazing products.

One taste and I knew that I had to figure out how to make these amazing morsels. As luck would have it, my copycat version looks and tastes just like the real thing!

Ingredients for Hold the Cone

Initially, I was going to make my own sugar cones, but figured out how to use store-bought sugar cones. Read on and I’ll show you how I did that!

I chose vanilla ice cream since that is the Master Taste Tester’s favorite ice cream.

The magic shell is made from chocolate chips and and coconut oil.

As a final item, I needed something to hold the cones while I was making them. It turned out that an empty egg carton was perfect for this.

Steps in Making the Copycat Hold the Cone

The first thing that I did was to cut small holes in the bottom of an empty styrofoam egg carton. I used an x-acto knife to cut the holes. However, I could have also used scissors or a small paring knife.

I experimented with cutting down store-bought sugar cones. At first, I tried using a serrated bread knife to do this. It sorta worked. However, because the sugar cones are so brittle, I ended up destroying a fair number of them.

Then, I tried using kitchen shears to actually cut the cone down to about 3-inches. Guess what, this worked like a charm.

Step 3: “Sanding” the Rough Edges of the Mini Cone

I wasn’t too concerned about the rough edges of the cut-down sugar cone since the magic shell would cover the edges. However, using a technique I learned in a Paris cooking class, I “sanded” the rough edges with the underside of a small wire mesh strainer.

With the cones prepared, my next step was making the magic shell. I used two simple ingredients – semisweet chocolate chips and coconut oil.

Step 5: Coating the Inside of the Mini Cone with Magic Shell

I placed the mini cones upright in the prepared empty egg carton. Then, I added about a teaspoon of the magic shell mixture to the mini cone. I rolled the mini cone horizontally to evenly coat the inside.

I placed the cones in the freezer for about 15 minutes to allow the chocolate to harden.

Step 6: Piping the Ice Cream into the Cones

I placed the cones filled with the ice cream into the freezer for about an hour to allow the softened ice cream to harden.

Step 7: Dipping the Cones into the Magic Shell

I dipped the cone vertically into the magic shell mixture and let the excess drip off.

Then, I replaced the dipped cone in the egg carton and repeated this for the remaining cones.

I placed the dipped cones in the freezer to allow the magic shell to continue to harden.

To say that the Hold the Cones were amazing is a total understatement. They were the perfect size for when you want just a taste of ice cream.

Susan and I compared the copycat Hold the Cone to the real thing and couldn’t tell a difference!

Now you can make your own without driving to the nearest Trader Joe’s. Yum!

Can you use something other than Coconut Oil to make the Magic Shell?

The secret ingredient in magic shell is coconut oil. When the two are melted together, they become liquidity. However, within seconds of contact with the cold ice cream, the magic shell rapidly cools down and becomes hard – like magic.

You could, however, use butter in place of the coconut oil with the same result.

How long does magic shell last?

Should magic shell be refrigerated?

It’s best to keep magic shell at room temperature. If refrigerated, the magic shell will harden.

Will the store-bought sugar cones break up if you try to cut them down?

The store-bought sugar cones are pretty brittle. However, if you are very careful when cutting them down, it should work fine. Just go slowly.

How much ice cream should be piped into the cones?

I like to continue piping the ice cream until it’s about an inch above the cone. I also like to add a swirl to enhance the appearance of the final Hold the Cone.

If you’re a fan of ice cream, you should check out these other delicious recipes.

I hope you liked this recipe for Hold the Cone Copycat as much as I do. If so, please consider rating it and leaving a comment. Also, if you’d like to receive notifications of new posts by email, enter your email address in the Subscribe box. 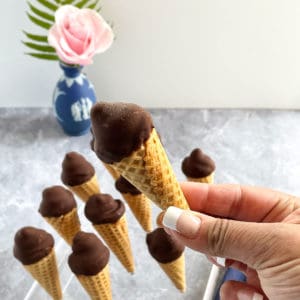