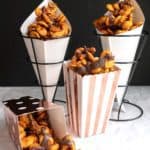 Chocolate Drizzled Caramel Oyster Crackers is a twist on the ever popular Chocolate Drizzled Caramel Corn. Rather than using popcorn, I used Oyster Crackers. I tossed the crackers with toasted pecans, baked it in a dreamy caramel sauce, and finished it with a drizzle of melted chocolate. The combination of the saltiness of the Oyster Crackers and the sweetness of the Caramel is a match made in heaven! It will keep for several weeks when stored in an airtight container. Better yet, it makes awesome holiday gifts when packaged in decorative containers. 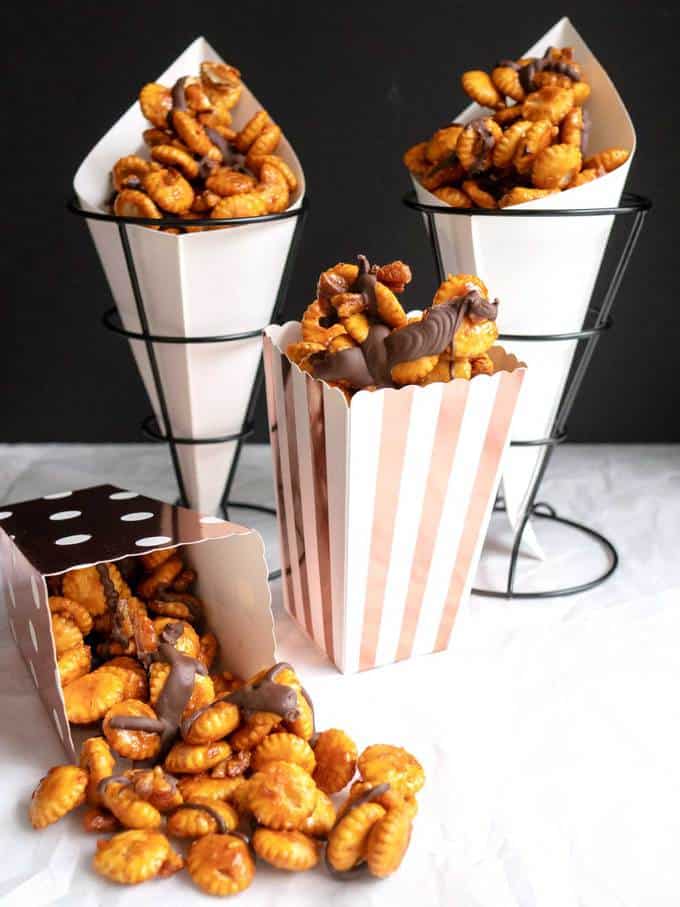 As you might imagine, through the years, the weight of a package of Oyster Crackers has pretty significantly declined. When I post the recipe below, I’ll be sure to include that the two bags combined yielded a total of 10 cups! 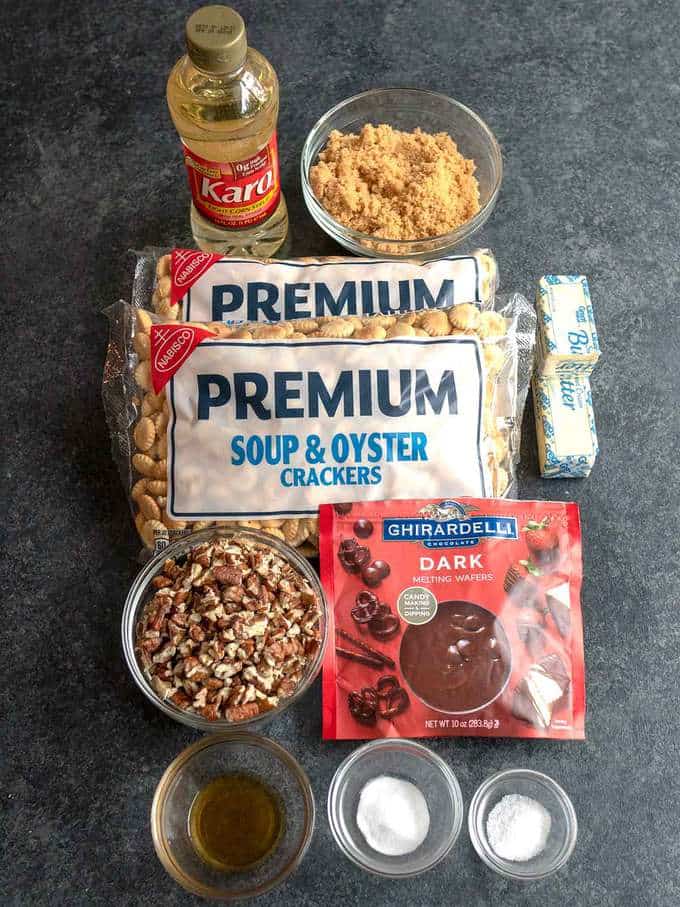 Making The Caramel For The Chocolate Drizzled Caramel Oyster Crackers

I added the brown sugar, unsalted butter, corn syrup, and salt to a small saucepan and placed it over medium high heat. Because the Oyster Crackers are salted, you might want to decrease the amount of salt a bit. For me, the amount that I used was perfect. Had I used salted butter, however, I would have omitted adding any additional salt. 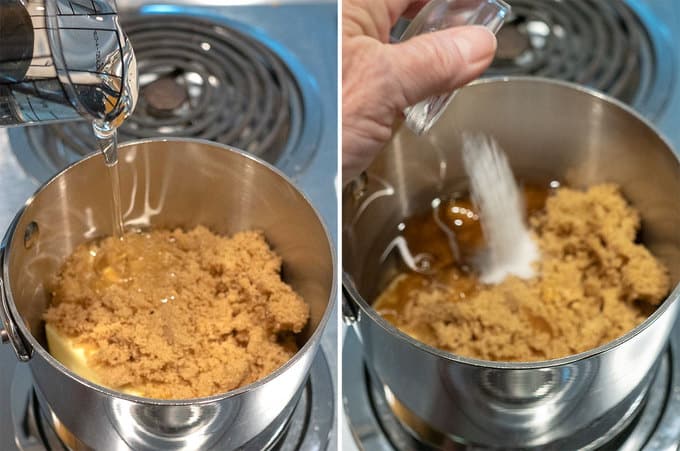 Once the butter had melted, I stirred everything together. When the mixture came to a boil, I lowered the heat to medium low. I let the caramel mixture continue to boil without stirring for five minutes. After five minutes, I removed the pan from the heat, and added the vanilla extract and baking soda. I stirred the caramel to ensure that the vanilla and baking soda were well incorporated, being careful not to burn myself as the caramel bubbled up! 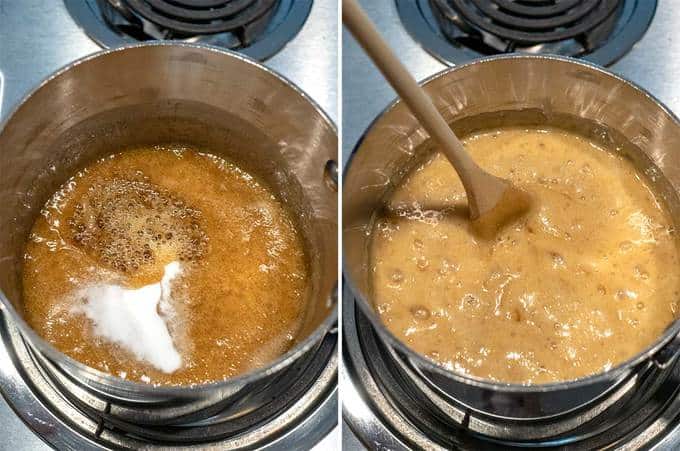 When the caramel was ready, I poured it over the toasted pecans and Oyster Crackers. I quickly stirred the mixture with a wooden spoon to coat the pecans and crackers. 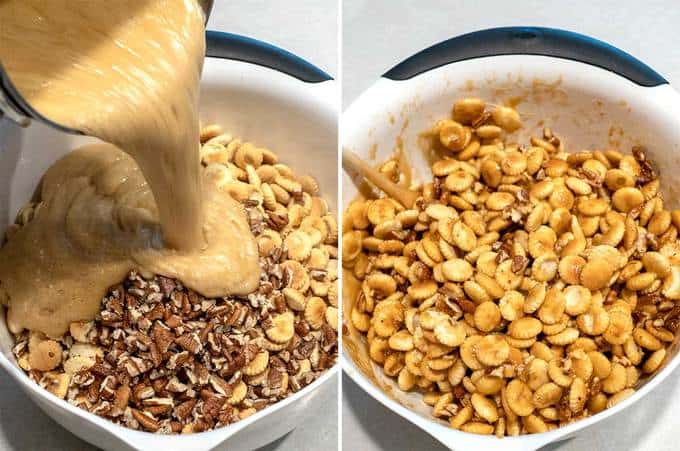 After spreading the mixture out in the pan, I placed it into a preheated 250° F oven for an hour and 15 minutes. Every 15 minutes, I removed the aluminum pan from the oven, and stirred the Caramel Oyster Crackers to ensure that the pecans and crackers were well coated. 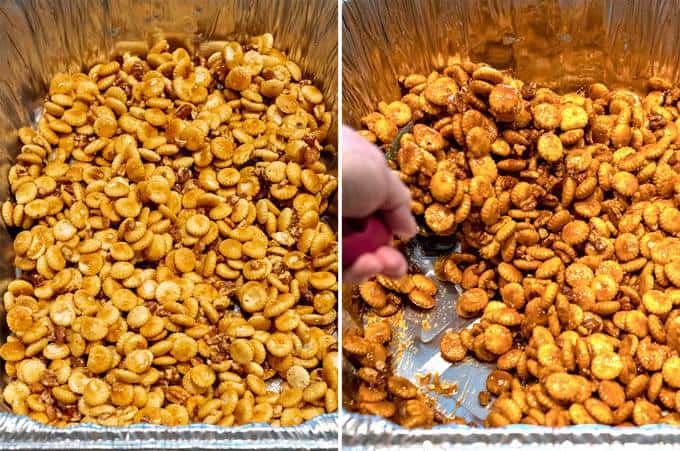 After an hour and 15 minutes, I gave the Caramel Oyster Crackers one last stir and dumped it onto a piece of parchment paper so that it could completely cool. As it was cooling, I drizzled it with melted dark chocolate. 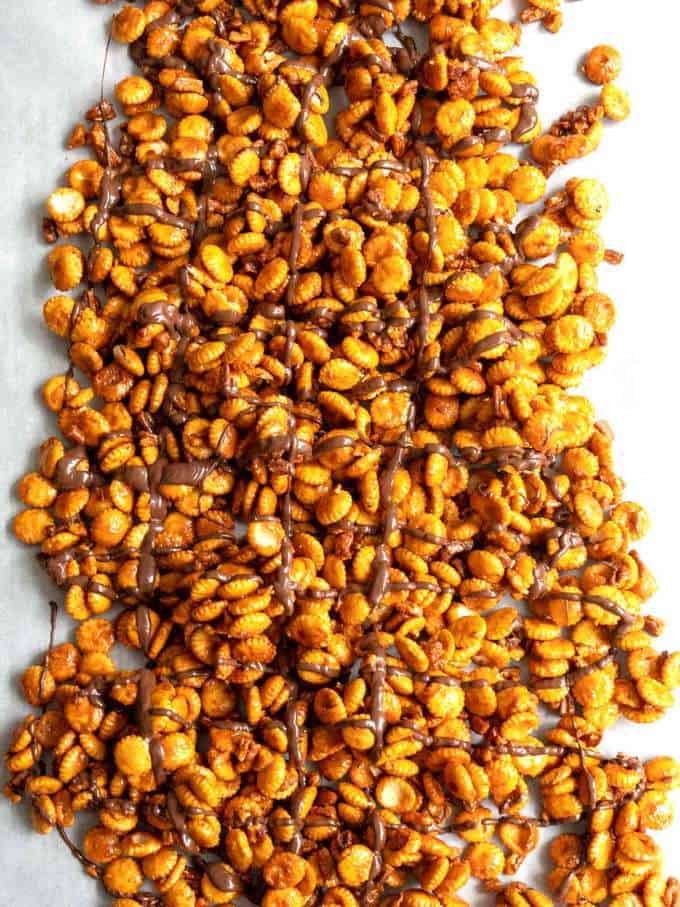 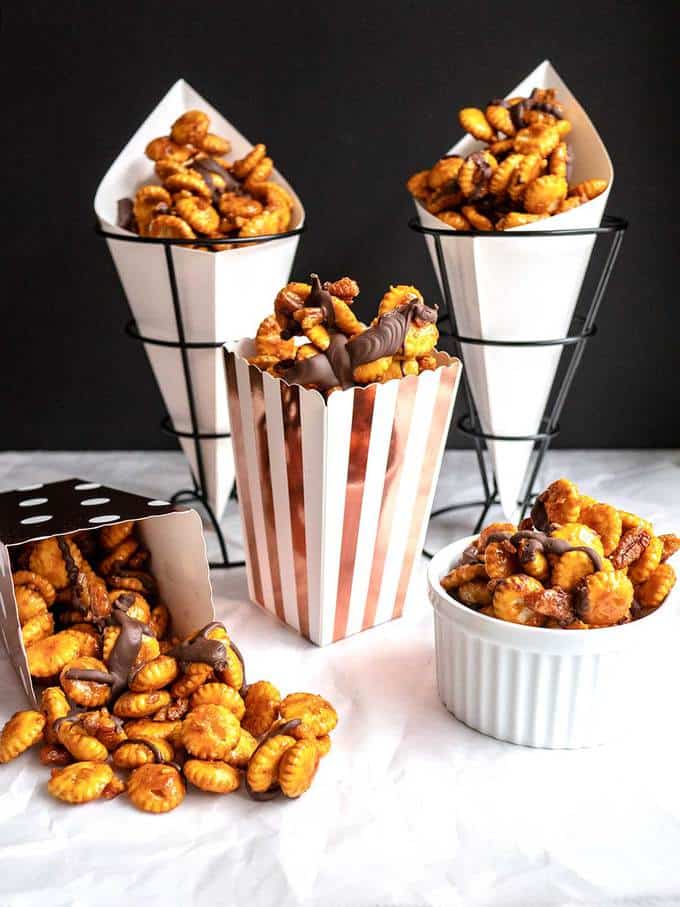 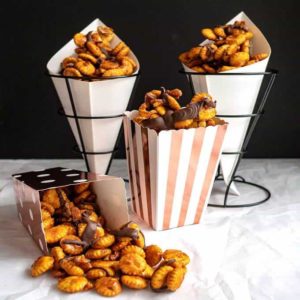 Chocolate Drizzled Caramel Oyster Crackers is a twist on the ever popular Dark Chocolate Drizzled Caramel Corn. Rather than using popcorn, this addictive treat features Oyster Crackers tossed with toasted pecans, baked in a dreamy caramel sauce, and finished with a drizzle of melted chocolate. The combination of the saltiness of the Oyster Crackers and the sweetness of the Caramel is a match made in heaven!
5 from 5 votes
Print Pin Rate
Course: Appetizer
Cuisine: American
Prep Time: 5 minutes
Cook Time: 1 hour 20 minutes
Total Time: 1 hour 25 minutes
Servings: 12 servings
Calories: 539kcal
Author: Chula King 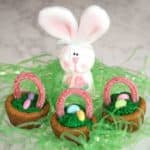 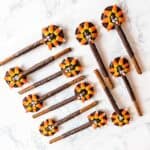 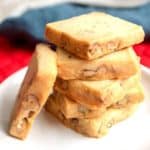 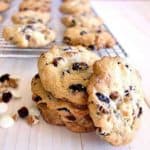