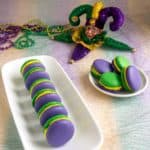 Today is the first day of the New Orleans Carnival Season, which ends on Mardi Gras or Fat Tuesday. This year, Mardi Gras is on February 13. Carnival is a time to eat, drink, and be merry before the rigorous fasting and sacrifice during Lent. During this time, I thought that I would challenge myself to post a New Orleans/Mardi Gras themed recipe every day until Mardi Gras, starting with these incredible Mardi Gras Macarons. Laizzez les bons temps rouler with these melt in your mouth macarons filled with a light and airy lemon buttercream. 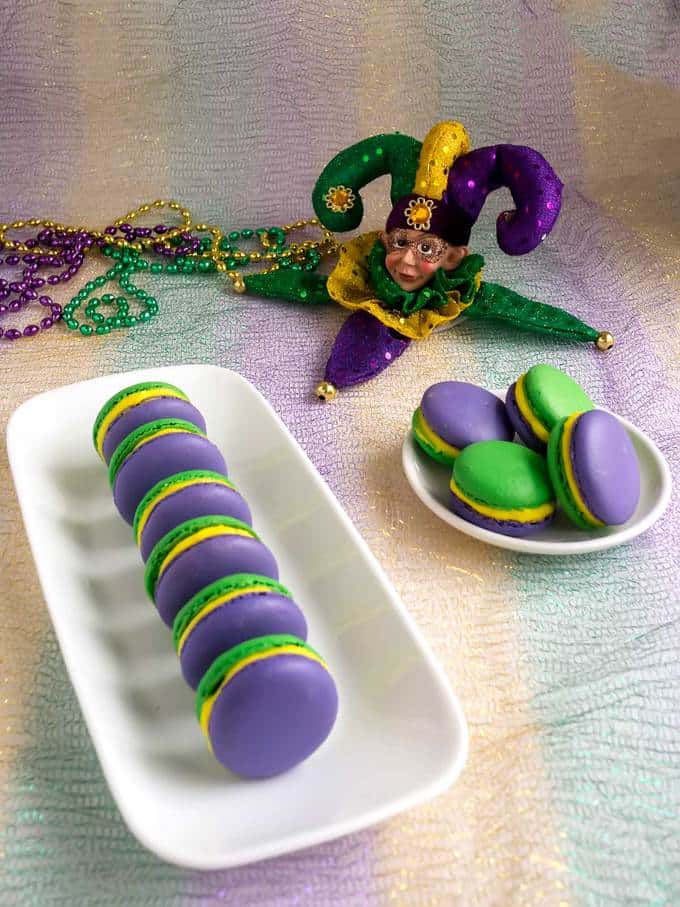 During one visit to New Orleans, Susan and I went to Sucré. Sucré is an artisan dessert and confection shop located in the French Quarter. For the low-low price of $37.50 one could purchase a box of 15 Mardi Gras Macarons. That’s $2.50 apiece! In honor of the beginning of Carnival season, I decided to try my hand at making my own Mardi Gras Macarons! 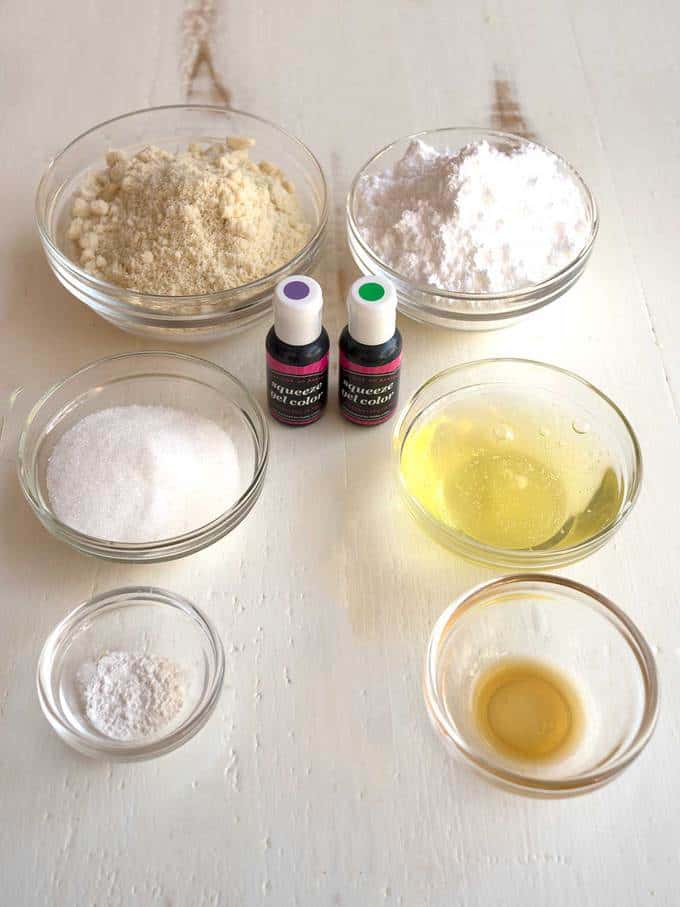 Making the Shells for the Mardi Gras Macarons:

The most time-consuming part of making the macaron shells was sifting together the almond flour and the confectioners’ sugar. The reason that I did this was to ensure that no large bits of almonds end up in the macaron shells. 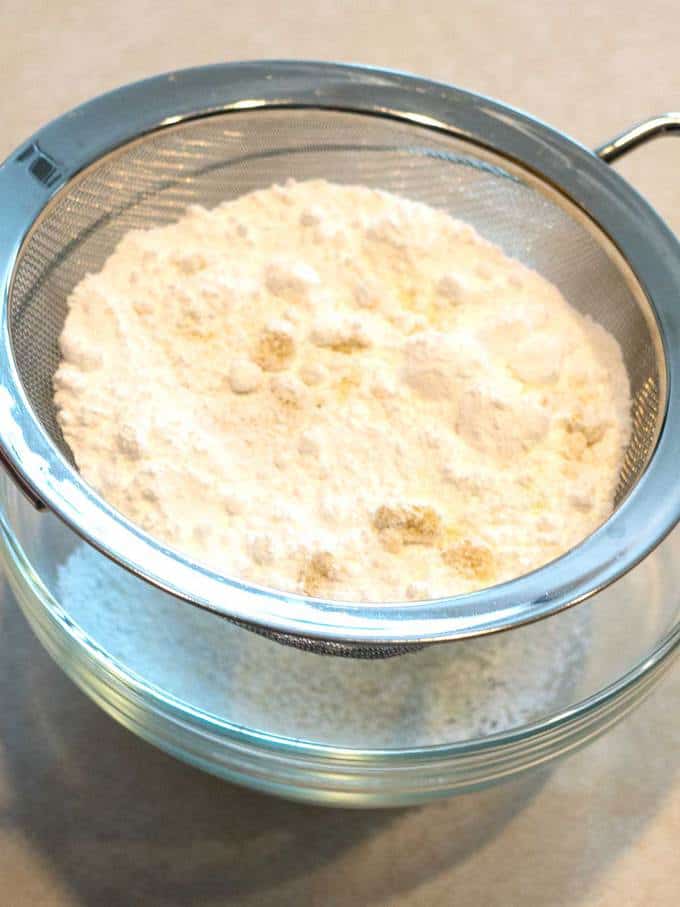 Next, I turned my attention to the meringue. In the past, I’ve made macarons using Italian meringue. For these macarons, I decided to use French meringue which is much easier to make!

I started by beating the egg whites on high until they were foamy. Then, I added cream of tartar, which stabilizes the egg whites and allows them to maintain their texture when whipped into stiff peaks. It also increases their tolerance to heat. After beating in the cream of tartar, I beat in the granulated sugar, one tablespoon at a time. I continued beating the meringue until stiff peaks formed. Finally, I colored the meringue with some green gel food coloring. 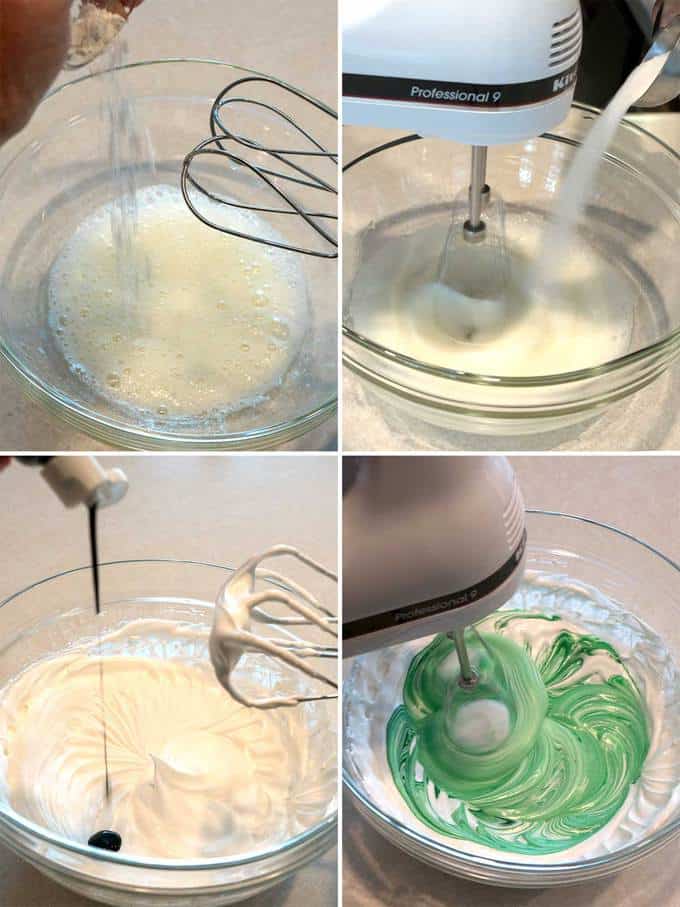 Once the meringue was ready, I sifted in the mixture of almond flour and confectioners’ sugar. Then, I gently folded the mixture together with a spatula. At first, the batter was really thick. However, I continued folding it until it thinned out enough that a small amount dropped into the batter disappeared in about 10 seconds.

One critical thing about making macarons is the consistency of the batter. If it’s too thick, the shells will rise and crack when they’re cooked. If the batter is over-worked and too thin, the shells will not hold their shape, and will spread out and become flat and “feetless”. Anyway, because I was making two-tone macarons I repeated this process to make a purple batter. 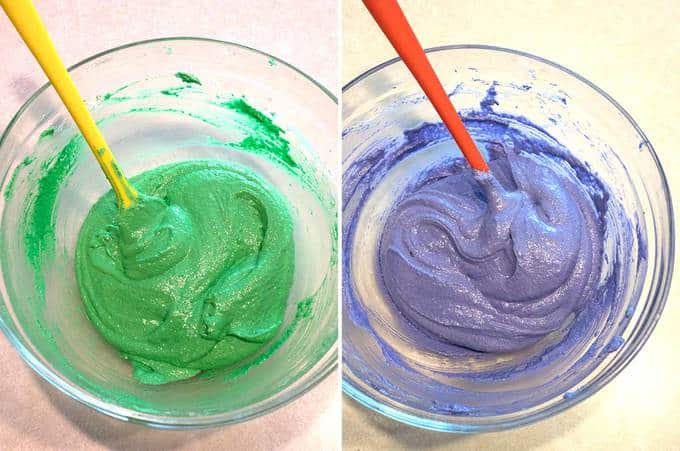 Forming the Shells for the Mardi Gras Macarons:

Once the batter was made, I transferred it to a pastry bag fitted with a #12 round tip. I piped 1-½ inch circles onto a silicon mat. To do this, I held the bag in a vertical position to the mat, and counted to six. The silicon mat that I used already had the circles drawn, but I counted anyway! Once I had filled the baking sheet, I tapped it on the counter several times to release any air bubbles in the shells. 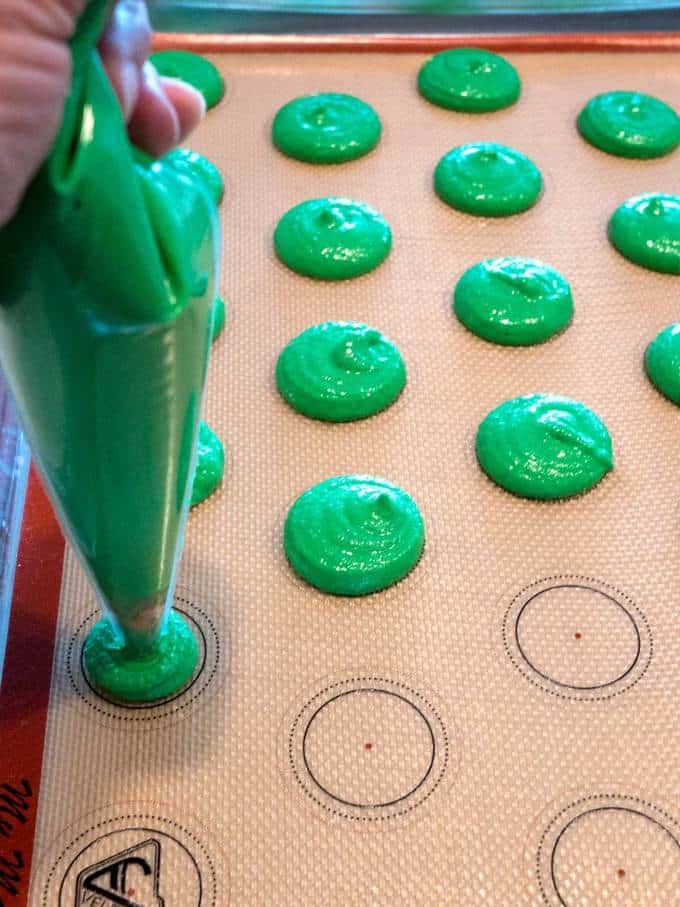 Before baking the shells, I needed to let them dry out and form a skin. This took about 30 minutes. I could tell that they were ready to go into the oven when I could lightly touch one without the batter sticking to my finger.

When the shells had formed a skin, I popped them into a preheated 325° F oven for about 12 minutes. I rotated the sheet halfway through the cooking time. The shells were done when I could remove one without the bottom sticking to the silicon mat. I removed the baking sheet from the oven, and let the shells cool for about 15 minutes before transferring them to a wire rack to cool completely. I repeated this entire process for the purple shells. 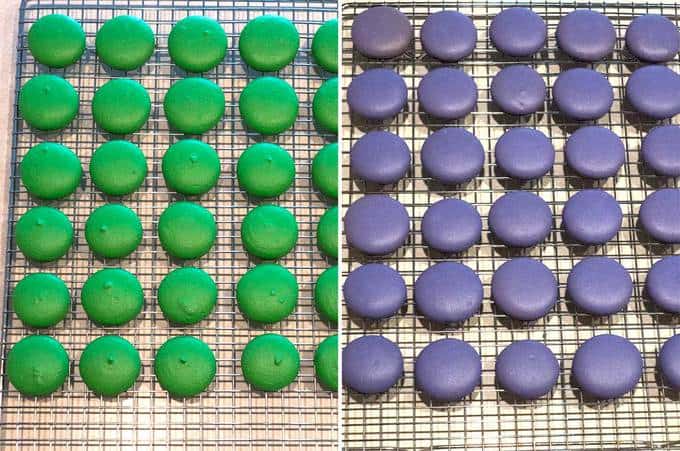 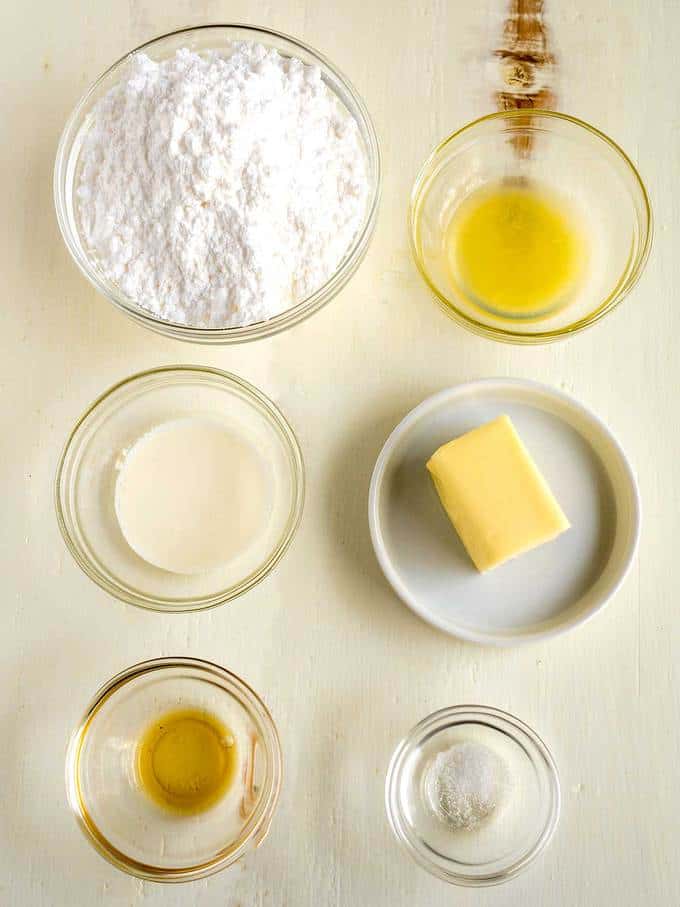 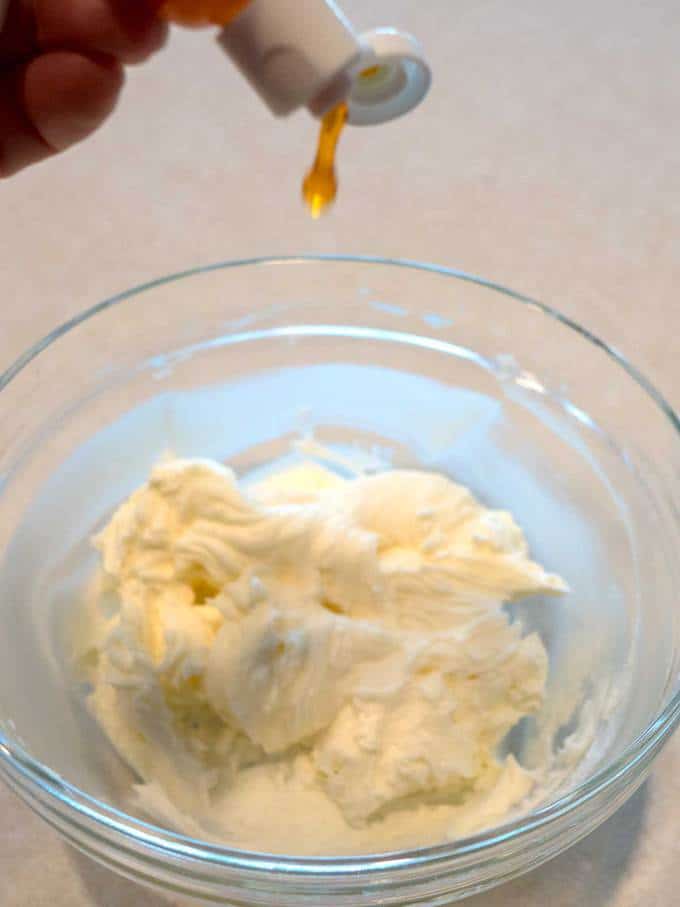 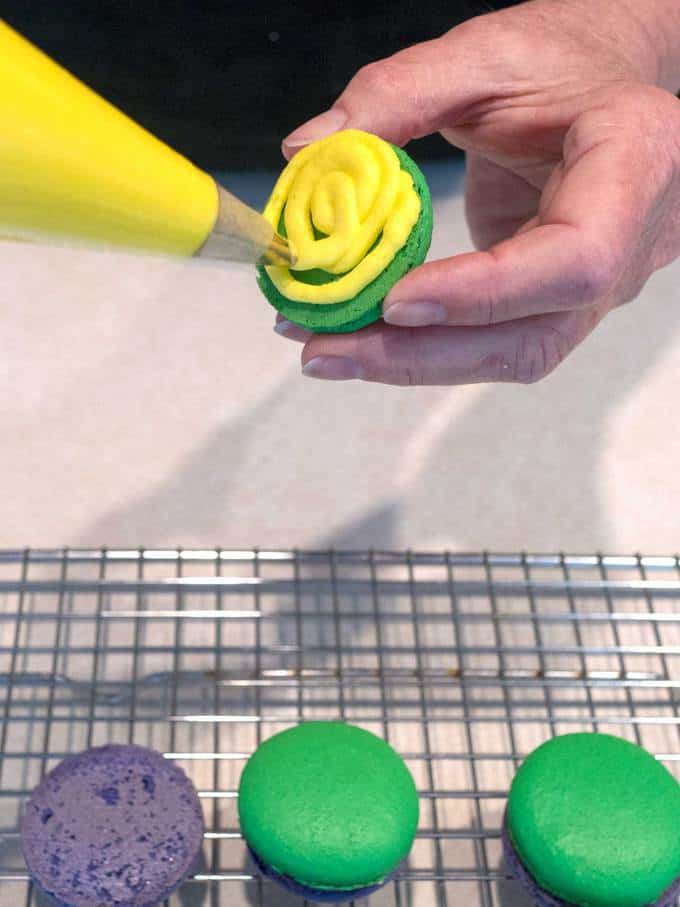 I ended up with around 3 dozen absolutely beautiful and delicious Mardi Gras Macarons. Laizzrez les bons temps rouler and Yum! 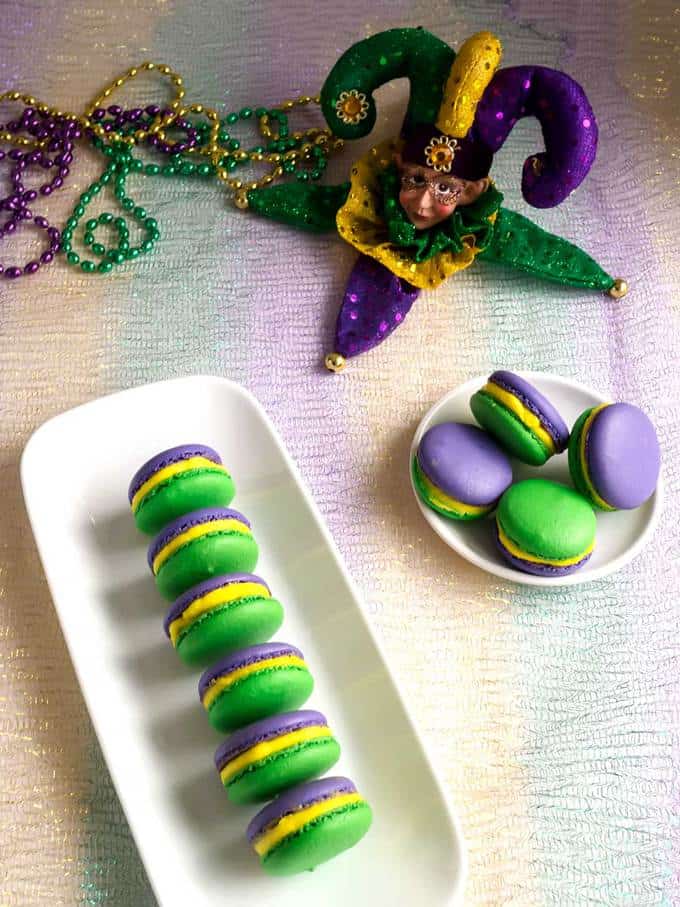 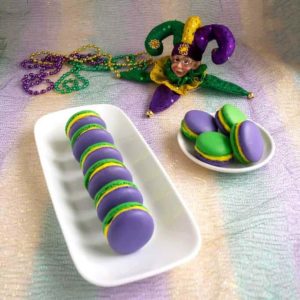 Macaron Shells (Note, this makes enough for the green shells; repeat for the purple shells)

Lemon Buttercream (Note, this is enough to fill all of the macarons from the double recipe)