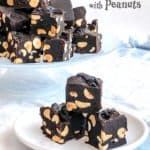 Old-Fashioned Chocolate Fudge is likely to be the fudge you remember from your childhood. It’s not necessarily easy to make, nor is it quickly put together. However, its creamy dreamy ultra smooth consistency and deep chocolate taste is well worth the effort. For an added bonus, add nuts of your choice. I chose to add unsalted peanuts! 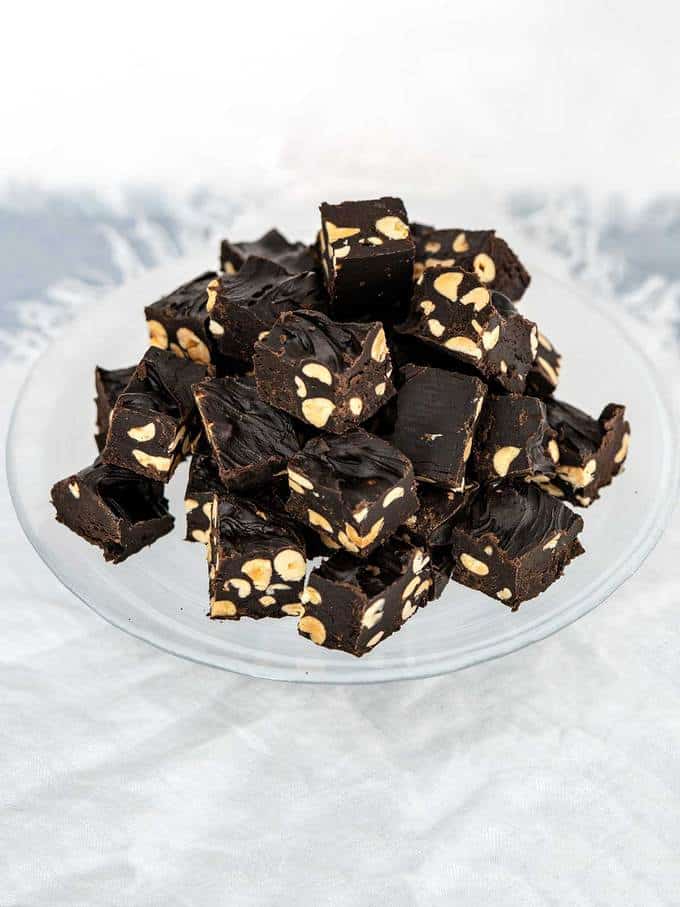 If you were to ask Susan what two things I cannot make, one would be fudge! The other would be fried chicken! Go figure.

I remember how incredibly tasty this fudge was when I was a kid. I asked for the recipe and tried to make it when I was about 10. At that time, I had no idea that there were different types of cocoa and ended up using the type that you mix with milk to make chocolate milk.

Needless to say, the result was pretty disastrous. In subsequent tries, I was less than successful even though I used the right type of cocoa. Then, I discovered that the problem was not being patient. As it turns out, patience is not one of my virtues. Just ask the Master Taste Tester! Anyway, on to how to make this awesome fudge.

I used the following ingredients based on the recipe that used to be on the back of Hershey’s Cocoa tin: Granulated sugar, special dark cocoa powder (unsweetened), salt, milk, unsalted butter, vanilla extract and unsalted peanuts. The reason that I used the special dark cocoa was that it was what I had on hand. However, I could have also use regular unsweetened cocoa powder here. 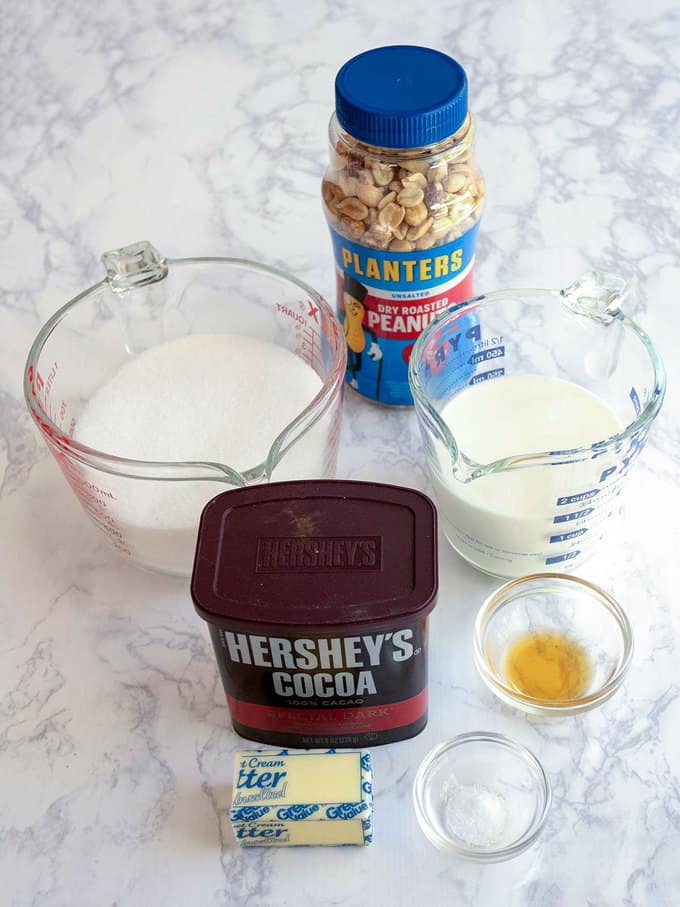 Bringing the Fudge to the Soft Ball Stage

I started by combining the sugar, cocoa and salt in a 4-quart heavy saucepan. It’s important to use a large saucepan for making this fudge. The reason is that the fudge mixture ultimately bubbles up quite a bit. 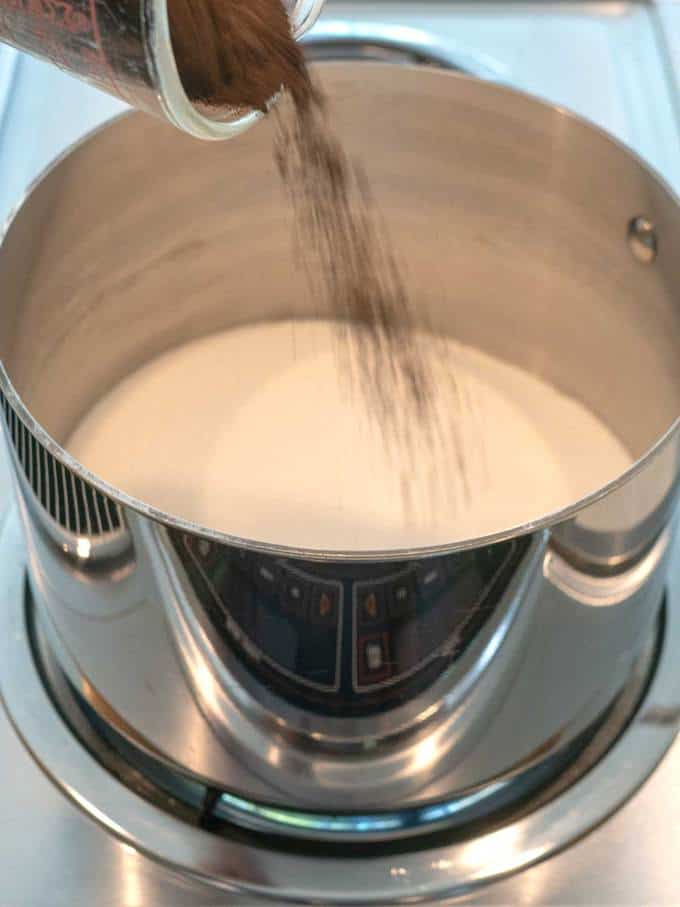 After stirring together the sugar, cocoa and salt, I added the milk. I used a whisk to fully incorporate the milk with the other ingredients. The reason for using the whisk was that I wanted to make sure that there were no lumps of either the sugar or the cocoa. 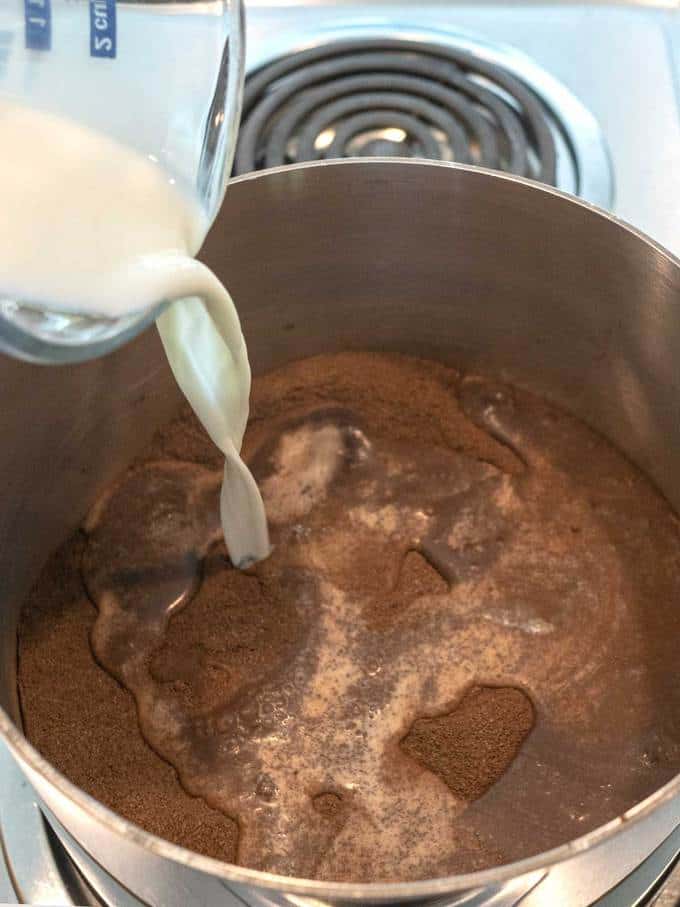 Once all of the ingredients were well combined, I heated the mixture over medium heat until it came to a rolling boil. This took about 9 minutes. Then, I clamped a digital thermometer to the side of the pan and waited for the temperature to reach 234° F. This took about 12 minutes. During this time, I made sure that I didn’t stir the fudge mixture.

234° F is the soft ball stage. At the soft ball stage, the mixture will form a soft, flexible ball when dropped into cold water. When removed from the water, the ball will flatten like a pancake. Therefore, if you don’t have a thermometer, you can use this technique to determine when the mixture has reached the appropriate temperature. 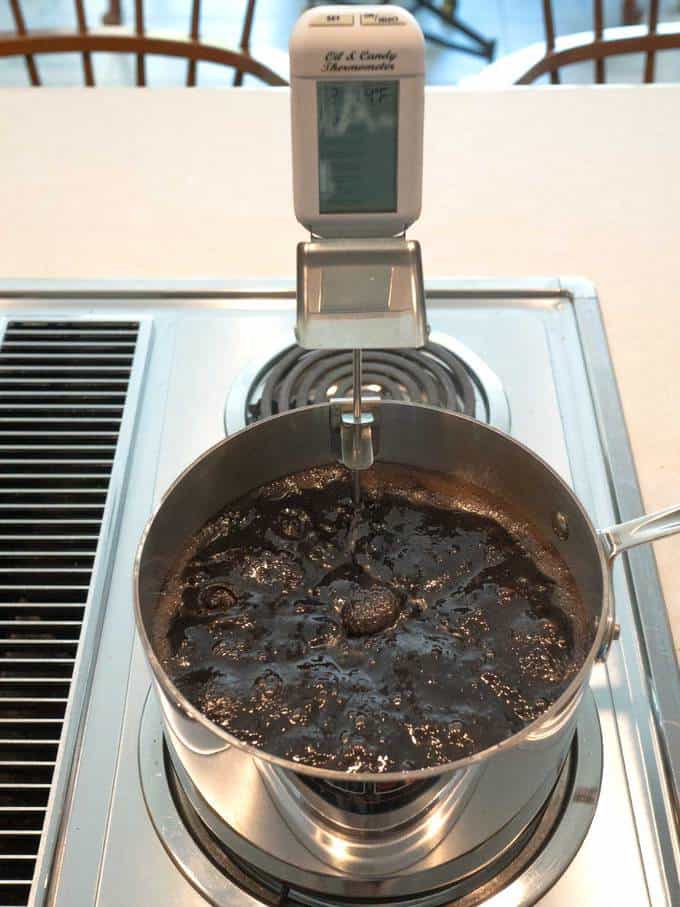 Finishing the Old-Fashioned Fudge with Peanuts

When the temperature of the mixture reached 234° F or the soft ball stage, I removed the pan from the heat and added the butter and vanilla extract. Again, I did not stir the mixture. Rather, I waited until it reached 110° F or was lukewarm. This is where I had to be patient – it took 1 hour and 15 minutes for the mixture to cool to 110° F!

If you don’t have a thermometer, you can guesstimate the temperature when you can comfortably place your hand on the pot. 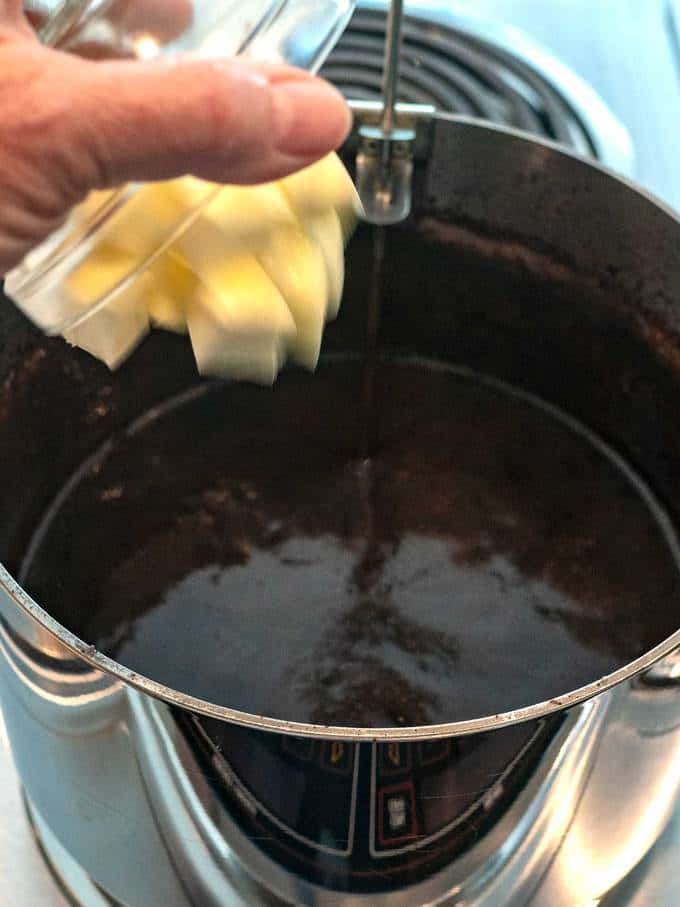 Now comes the part that I hate because of the elbow grease involved. I beat the Old-Fashioned Chocolate Fudge mixture with a wooden spoon until it thickened and started to lose some of its gloss. This took a total of about 8 minutes. 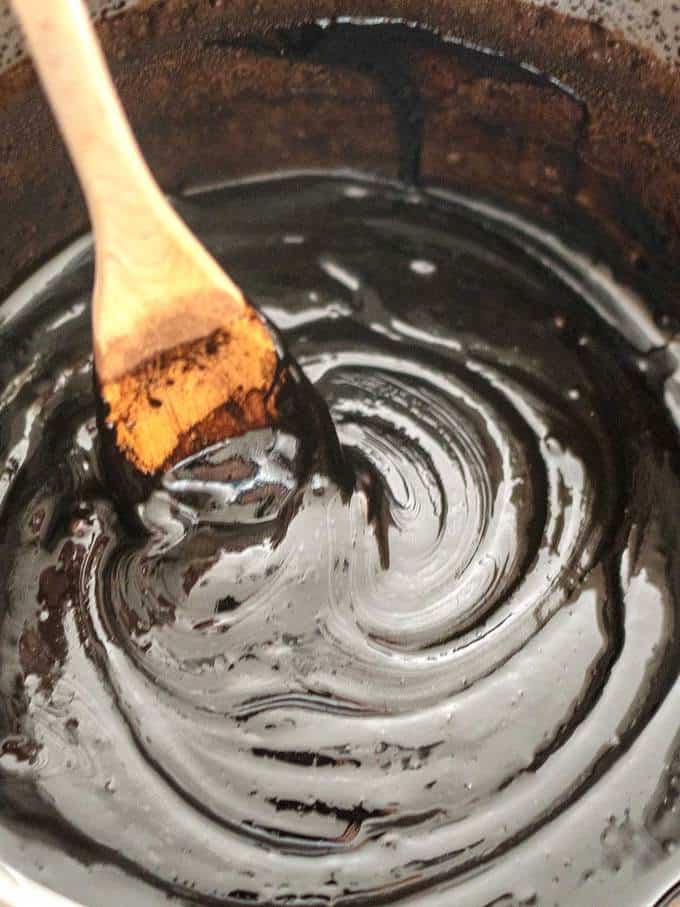 After about 5 minutes of beating the fudge mixture, I added the peanuts. I continued beating the mixture for several additional minutes until the desired consistency and look were achieved. 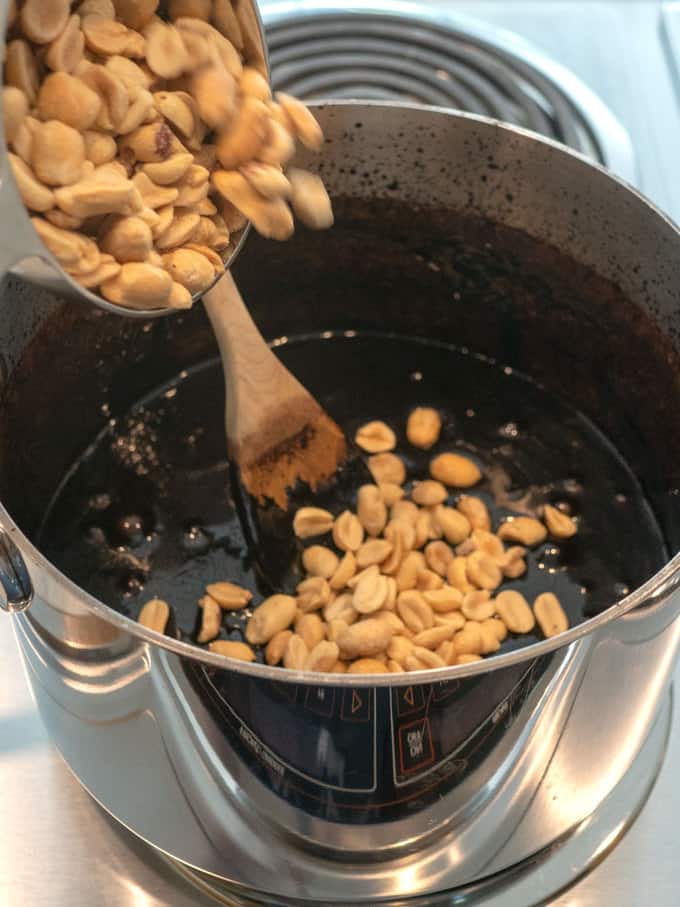 The beating is really the most critical step in making the fudge. If the mixture is not beaten enough, it won’t harden like it’s supposed to. If it’s beaten too much, it’ll take on a grainy texture.

When the fudge had started to lose its gloss, I quickly poured it into an 8-inch square pan that I had lined with parchment paper. I smoothed the fudge out as best as I could given that it started to harden very quickly. Then, I let the fudge cool completely. 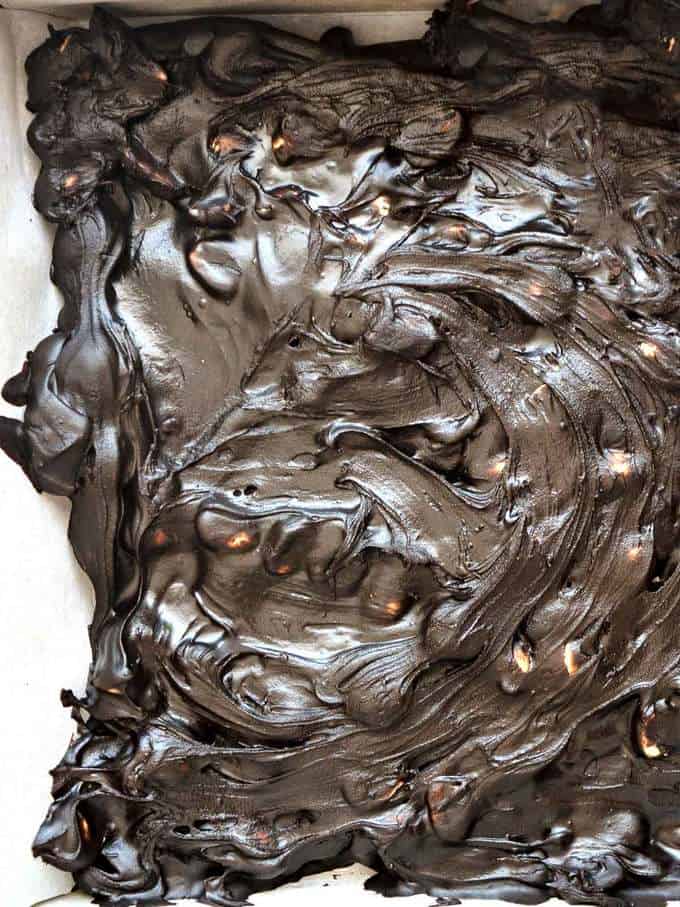 Once the fudge had cooled, I lifted it out of the pan and cut it into 1-inch squares using a bread knife. The reason for the bread knife was to cleanly cut through the peanuts.

I ended up with about 4 dozen pieces of absolutely delicious Old-Fashioned Chocolate Fudge with Peanuts. Each bite took me back to my childhood days!

The fudge had hardened perfectly and was not at all grainy. Rather it was velvety smooth with a deep chocolate taste and crunch of peanuts. Yum! 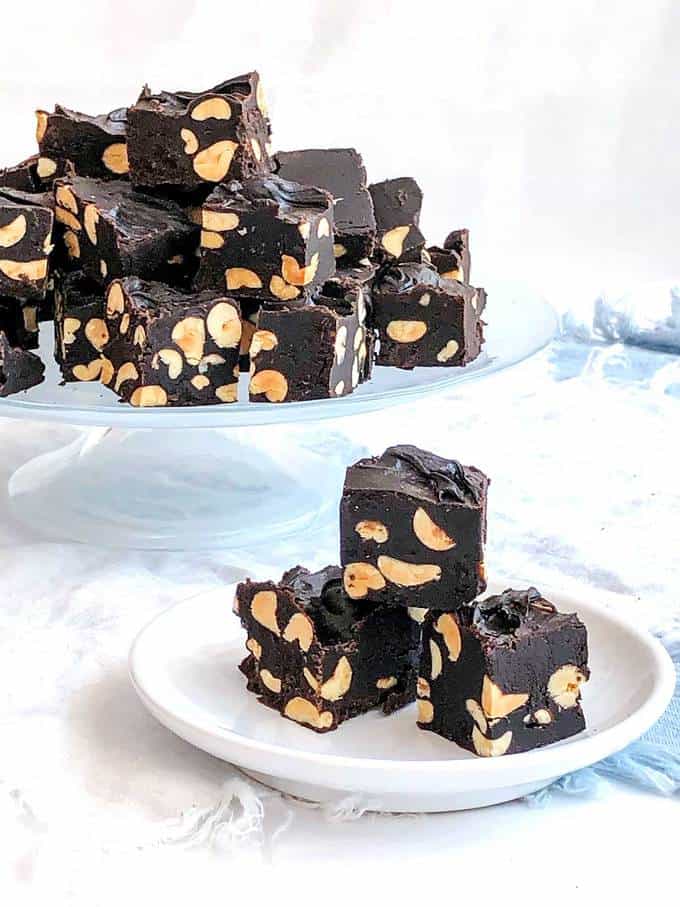 If you’re looking for an awesome chocolate candy recipe, but don’t want to invest too much time, you should try the following:

If you try the fudge or one of these other recipes, please consider leaving a comment to let me know how it turned out. Also, if you’d like to receive notifications of new posts by email, ever your email address in the Subscribe box. Thank you so much for visiting Pudge Factor. I hope you’ll come back! 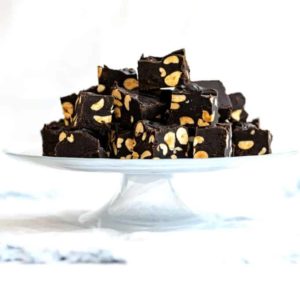