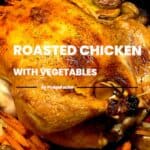 Roasted Chicken with Vegetables is a simple and delicious dish to prepare. During the holidays, forget the turkey and instead roast a chicken, especially if you only have a few mouths to feed.

I like to use a large cast iron pan to roast the chicken and vegetables. However, a roasting pan will also work here.

To Brine or Not to Brine – That is the Question

If I have time, I like to brine the chicken before roasting it. The reason is that brining adds three things to the quality of the chicken.

First, brining enhances the flavor of the chicken. Second, brining adds moisture to the chicken by changing the protein structure, allowing water to be trapped. This is especially true for chicken breasts, which tend to be on the dry side.

Finally, brining tenderizes the meat and improves its texture.

If citrus is added to the brine, its acid also adds flavor, as does the addition of herbs.

Here’s How I Brined the Chicken

The main drawback of brining is that it takes time.

For my brine, I use water, Kosher salt, light brown sugar, a quartered orange, a quartered lemon, fresh rosemary, and fresh thyme.

One mistake that I made was miscalculating how much water would be displaced when the chicken was added.

I almost had a disaster on my hands when I added the whole chicken! Fortunately, however, the water level came to the top of the container, but not over it! I actually ended up removing about a cup of the brining liquid to avoid any spills.

Ingredients: Here’s What I Used for the Recipe

In addition to the brined chicken, I used unpeeled baby potatoes, baby carrots, and an onion for the vegetables.

Drying Out The Chicken

One of the negative features of brining is that the added liquid can impede the browning of the chicken skin. Therefore, after five hours, I removed the chicken from the brine and rinsed it well.

Then, I placed the chicken on a wire rack set inside a rimmed baking sheet. I patted the chicken dry with a paper towel and sprinkled it with some Kosher salt.

Getting the Chicken Ready for Roasting

I removed the chicken from the refrigerator after two hours. Now was the time to get the chicken ready for roasting.

I removed the pan from the oven and covered it with aluminum foil for 15 minutes while I baked the biscuits to go with the chicken.

The chicken was incredibly tender, and the vegetables were delicately flavored from roasting with the chicken. Yum!

How can you tell if the chicken is done?

What size cast iron pan was used for roasting the chicken and vegetables?

Can something other than a cast iron pan be used to roast the chicken?

You can use a roasting pan or other large oven-safe pan for roasting the chicken.

What size container was used for brining the chicken?

I used a 6 litre (almost 6 quart) container for the brining. It was almost too small, though. When I put the chicken into the container with the brine, the container almost overflowed!

What kind of potatoes were used in this recipe?

I used unpeeled baby gold potatoes, which I cut in half in this recipe. I’ve also used peeled russet potatoes cut into chunks in the past.

Is it necessary to baste the chicken while it’s roasting?

I don’t find it necessary to baste the chicken while it was roasting.

For a variation on the roasted chicken, try my Dry-Brined Spatchcock Chicken au Jus or Dry-Brined Roast Chicken.

If you liked the recipe for Roasted Chicken with Vegetables, please consider rating it and leaving a comment. I’d love to know how you liked it! 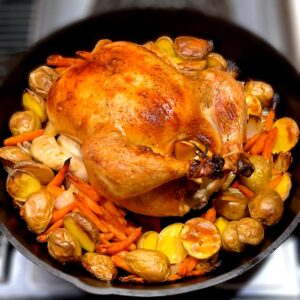