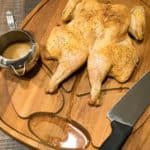 Dry Brined Spatchcock Chicken Au Jus is possibly the best roast chicken that you will ever eat! It’s tender, moist and incredibly flavorful. What’s even better is that it only takes 45 minutes to cook.

Spatchcocking is a cooking technique whereby the backbone and sometimes the breastbone is cut out of the chicken allowing it to be flattened or butterflied. It results in a perfectly roasted chicken with crispy skin.

The reason is that spatchcocking provides perfectly roasted chicken with crispy skin is that allows the legs to be exposed to more heat so that they’re done at the same time as the breast. Also, more skin is exposed to the heat resulting in the crispy skin.

If you don’t want to spatchcock the chicken, you can also use the dry brine technique on Dry Brined Roast Chicken.

Here’s What You Need To Make Spatchcock Chicken

The ingredients for Spatchcock chicken are minimal:

Why Dry Brining is Superior to Wet Brining

When you hear the word brine, you probably think of a liquid solution of salt, sugar, and water. The poultry is submerged in the wet brine for a period of time During this time, the brine soaks into the skin and the meat. The result is a more flavorful and moist poultry

While wet brining works well, dry brining is even better because it doesn’t soak the skin and plump the meat with water. Rather, the dry brine dries out the skin while flavoring the meat. The result is crispier skin and better tasting chicken!

For more information about dry brining versus wet brining, check out Serious Eats.

How Prepared the Spatchcock Chicken and Dry Brined it

The reason for cutting the removed backbone into pieces was that I used it later for the Au Jus.

That’s it – the chicken was ready to go into the refrigerator for about 10 hours to allow the dry brine to do its magic.

Time to Cook the Spatchcock Chicken

I prepped the spatchcock chicken in the morning before going to work. After about 10 hours when it was time to cook the chicken, I preheated the oven to 450° F.

Then, I removed I removed the chicken from the refrigerator, drizzled on some olive oil, and sprinkled it with some freshly ground black pepper.

I put the chicken in the 450°F preheated oven when the oven reached temperature. After about 45 minutes, the breast had reached 150°F and the thighs had reached 170°F.

The chicken was perfectly done! I removed it from the oven and covered it with aluminum foil for about 15 minutes.

The result was the very best roast chicken that I have ever had. It was juicy, incredibly tender, and perfectly cooked. The Au Jus added a special touch! Yum!

What’s the point of using the spatchcock technique?

Spatchcock chicken is flattened before cooking. This allows the chicken to cook more evenly so that the breast and thigh meat are done at the same time. Also, the chicken cooks more quickly and results in a crispier, golden brown skin.

Is spatchcock and butterfly the same thing?

What’s the difference between a dry brine and a wet brine?

What’s the point of adding baking powder to the salt in the dry brine?

Baking powder enhances the browning of the skin.

What side dishes go well with this recipe?

The Spatchcock chicken is basically roast chicken. Therefore, a number of side dishes work well with this recipe like mashed potatoes, risotto, roasted potatoes, steamed broccoli, asparagus, etc. You really can’t go wrong with the side dishes.

What is Au Jus?

Au jus, (pronounced like “zhoo”) is a French cooking term that literally means “with juice”. It refers to a light gravy made using fat drippings from meat like chicken.

If you’d rather not bother with spatchcocking the chicken, try my delicious Dry Brined Roast Chicken with Root Vegetables.

If you liked the recipe for Dry Brined Spatchcock Chicken Au Jus, as much as I do, please consider rating it and leaving a comment. Also, if you’d like to receive notifications of new posts by email, enter your email address in the Subscribe box. 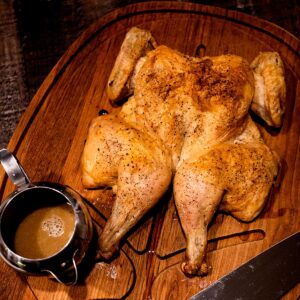