Shrimp and Grits Bites are a bite-sized version of two of the South’s favorite foods. Succulent shrimp are mounted on top of Smoked Gouda Grits rounds for a perfect appetizer. Wow your family and friends with these delicious bite-sized treats.

Ingredients for Shrimp and Grits Recipe

I’m a huge fan of cheese grits, and decided that these tasty morsels should be based on cheese grits.

The Grits: Generally when I make grits, I use quick grits. For this appetizer, I decided to use stone-ground grits.

Quick grits on the other hand is made from dried hominy where the hull and germ have been removed. Quick grits is ground fine and processed to cook quickly.

The Cheese: Generally, when I make cheese grits, I add Velveeta cheese. I also like to add Smoked Gouda cheese to grits, which is what I did with this recipe.

The Rest of the Ingredients: Bringing up the rear are water, salt and pepper.

One of the benefits of living on the Gulf Coast is an abundance of fresh seafood. My favorite is shrimp, preferably bay shrimp.

To clean the shrimp, I cut off the head and remove the shell. For the recipe, I left the tails on for appearance.

I then remove the vein from both the top and the bottom of the shrimp. Anyone who thinks that deveining the shrimp is unnecessary has never see how gross the vein can be!

The Flavorings: To flavor the shrimp, I used fresh garlic, Creole seasoning and Italian seasoning, complimented with some fresh lemon juice.

The Rest of the Ingredients: For the remaining ingredients, I used some olive oil and unsalted butter.

Making the Shrimp and Grits Bites

Making the Shrimp and Grits Bites was relatively easy. It involved preparing the grits, cooking the shrimp and putting the two parts together.

The Shrimp and Grits Bites made an amazing appetizer that was a flavorful as it was beautiful to look at. Yum!

Can I use Quick Grits as opposed to Stone-Ground Grits in this recipe?

Do I have to use Smoked Gouda Cheese in this recipe?

Either Cheddar cheese or Velveeta cheese will work fine in this recipe. Alternatively, you can omit the cheese all together.

Can I use frozen shrimp in this recipe?

If you’re unable to get fresh shrimp, you can use frozen shrimp. Make sure that the shrimp are on the large size though.

I love fried grits. Can I fry the grits rounds rather than putting them in the oven?

Other Shrimp and Grits Recipes

If you’re a fan of Shrimp and Grits, check out these amazing recipes.

I hope you liked this recipe for Shrimp and Grits Bites as much as I do. If so, please consider rating it and leaving a comment. Also, if you’d like to receive notifications of new posts by email, enter your email address in the Subscribe box. 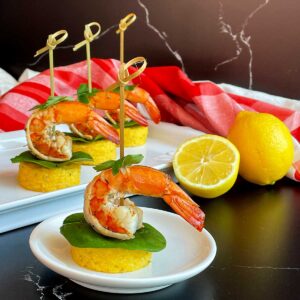