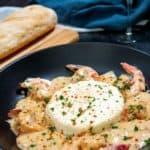 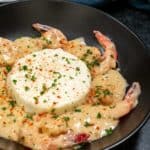 Creamy Cajun Shrimp and Boursin Grits is an easy to prepare but elegant dish to serve for any occasion. Succulent fresh shrimp are cooked to perfection in a creamy garlic and parmesan sauce. Ordinary grits are taken to new heights with the addition of not only Boursin cheese but also smoked Gouda cheese. Are you drooling yet? 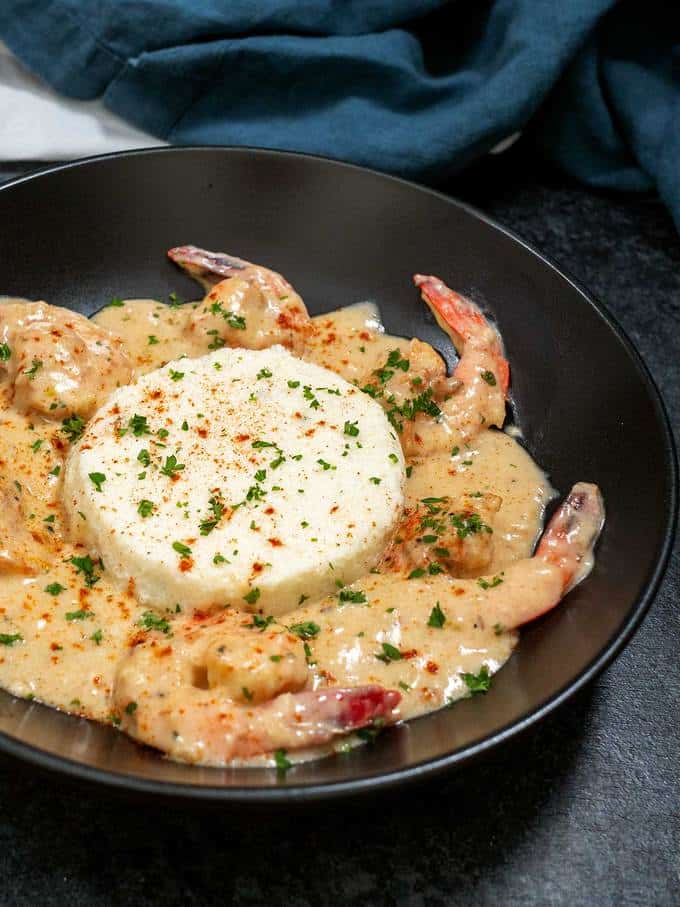 The inspiration for making this dish came from a phone conversation with my brother. He was describing a phenomenal dish that he had made. I was taking notes as fast as he was talking, thinking that I had to give this a try!

About Shrimp and Grits

Shrimp and Grits is an iconic Southern dish hailing from the coastal areas of Georgia and South Carolina. It was traditionally served for breakfast in areas with abundant local shrimp. Later, numerous variations started to appear and shrimp and grits began finding its way to the lunch and dinner tables.

Numerous variations of this quintessential dish have evolved. However succulent shrimp and lowly grits form the cornerstone of whatever amazing variation is presented.

Grits are a traditional Southern breakfast dish made from ground corn or ground hominy. Hominy is dried corn kernels that have been treated with an alkali solution such as lye or lime. In the process, the corn kernels soften and swell.

You can buy stone-ground grits, quick or regular grits, or instant grits.

Stone-ground grits are made from whole dried corn kernels that have been coarsely ground between the two stones of a grist mill. Because the entire kernel is ground, stone-ground grits often have a speckled appearance. They take much longer to cook than regular grits. Personally, I’ve only seen stone-ground grits at the local farmers’ market and arts and crafts festivals.

Instant grits are have a fine texture. They have been precooked and dehydrated. All that is required to prepare instant grits is the addition of boiling water.

You need a few simple ingredients to make this amazing Boursin Grits:

I started by making the Boursin grits.

First, I added the chicken broth to a large saucepan, and brought it to a boil over high heat. Then, I slowly added the grits to the boiling broth. After giving the grits a good stir, I reduced the heat to medium-low. I simmered the grits uncovered, stirring occasionally, until they were thick and tender. This took about 20 minutes. 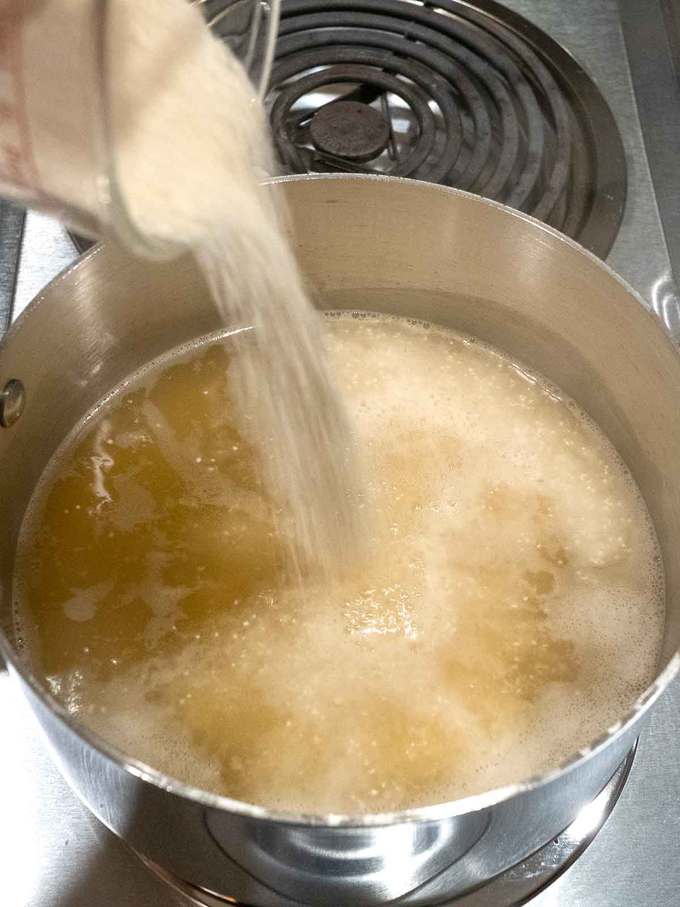 Next, I added the butter, Boursin cheese and shredded smoked Gouda cheese. I stirred the grits until the butter and cheeses were melted and the grits were creamy smooth. I finished the grits with a small pinch of salt. Talk about good! 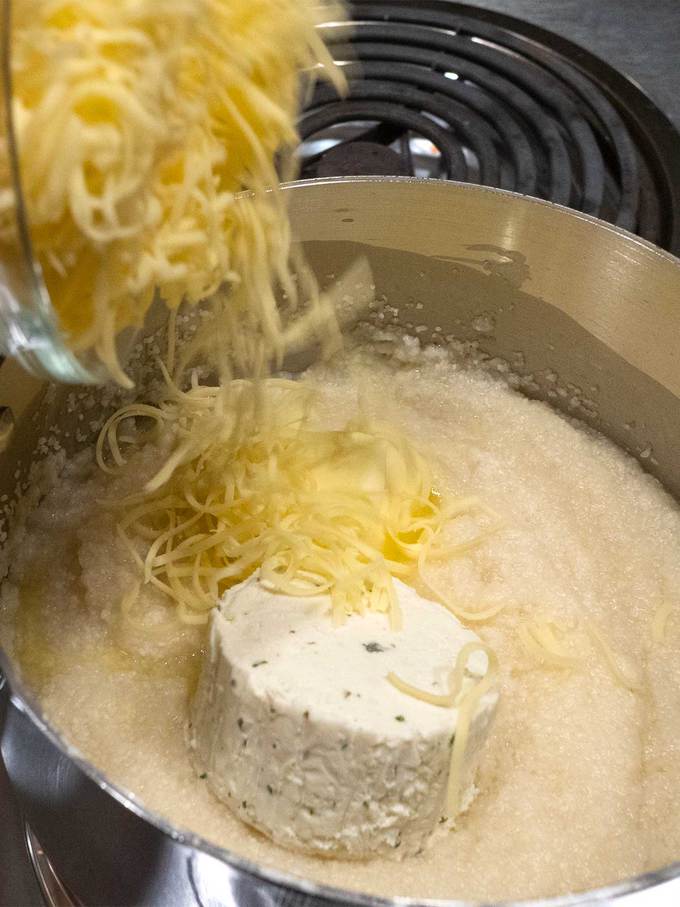 While the grits were cooking, I turned my attention to making the shrimp using the following ingredients: 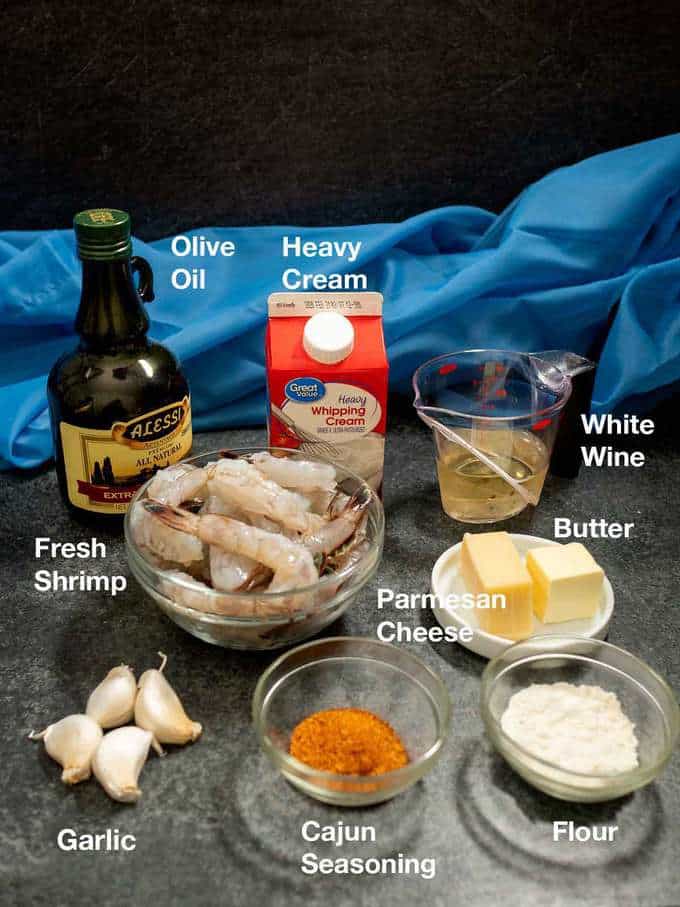 I started by tossing the shrimp with some Cajun seasoning. 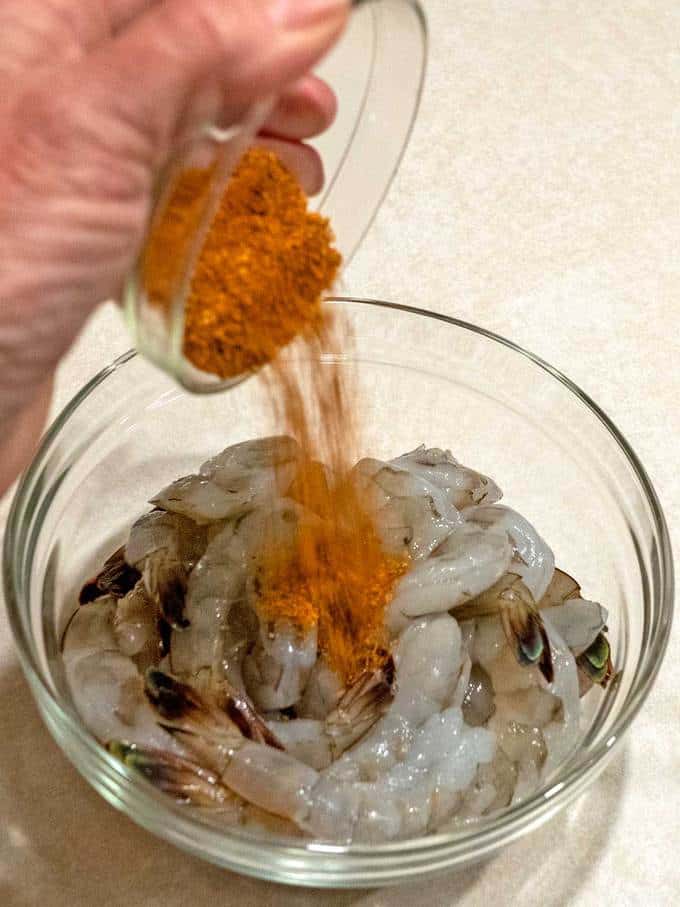 Next, I heated some olive oil in a large non-stick skillet over medium high heat. Then, I added about one-third of the shrimp to the hot oil. I cooked the shrimp for a minute or two on either side and removed them from the pan. At this point, the shrimp had just started to color, but were not fully cooked. I repeated this with the remaining shrimp. 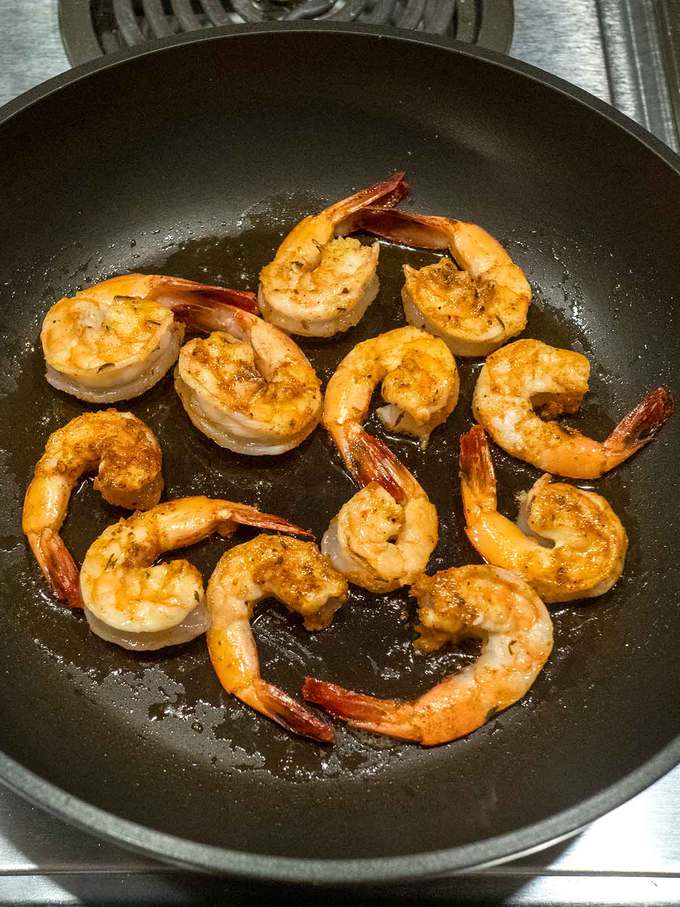 Once all of the shrimp were cooked, I reduced the heat to medium and added the butter to the skillet. When the butter had melted, I added fresh minced garlic (Photo 1). I cooked the garlic for about 30 seconds until it was fragrant. 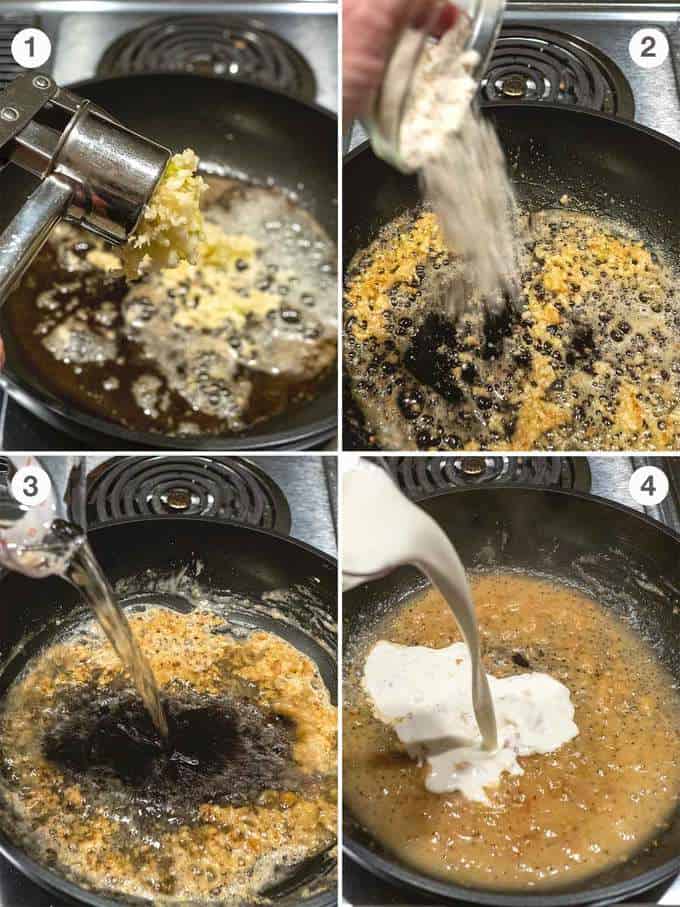 Before adding the shrimp to the sauce, I added some freshly grated Parmesan cheese.

Once the Parmesan cheese was melted and combined with the creamy sauce, I added the shrimp.

I stirred the shrimp into the sauce and let them simmer for 3 to 4 minutes to ensure that they were fully cooked. I finished the creamy shrimp with a sprinkling of finely minced fresh parsley. 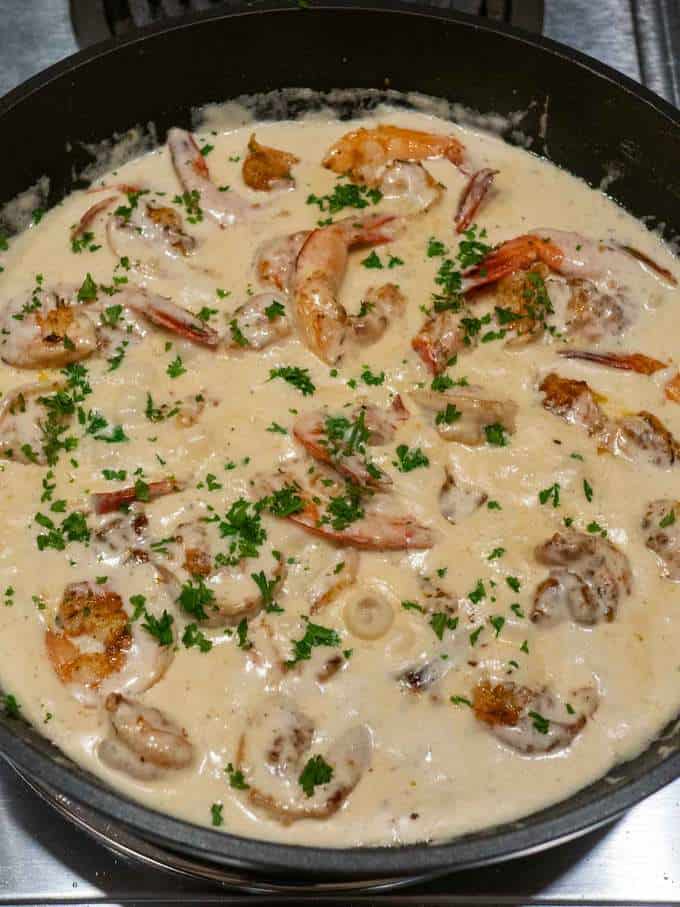 Can The Creamy Cajun Shrimp and Boursin Grits Be Made Ahead of Time?

This dish is best served right after it is made.

However, if you’re in a crunch you can make the grits ahead of time. As the grits cool, they tend to thicken. Therefore, as you reheat them, thin the grits to desired consistency with some chicken broth. Also, if you have leftover grits, you can reheat and thin them with chicken broth.

You can make the sauce ahead of time without first cooking the shrimp. Start with cooking the garlic in butter and continue to the point of adding the Parmesan cheese. Then, cook the shrimp separately in the olive oil for several minutes per side. Reheat the sauce, thinning it if necessary with some chicken broth. Add the shrimp and heat the dish until it’s bubbly and the shrimp are fully cooked.

What to Serve with Creamy Cajun Shrimp and Boursin Grits

This shrimp and grits dish is rich and filling. Therefore, I like to keep the sides light and simple.

My favorite salad to serve with this is a Caesar salad. I also like to serve crusty French bread and a chilled Chardonnay.

Hushpuppies could also be served in place of the French bread. Also a nice coleslaw would be a good replacement for the Caesar salad.

Whatever you serve with the Creamy Cajun Shrimp and Boursin Grits you are definitely in for a real treat. Yum! 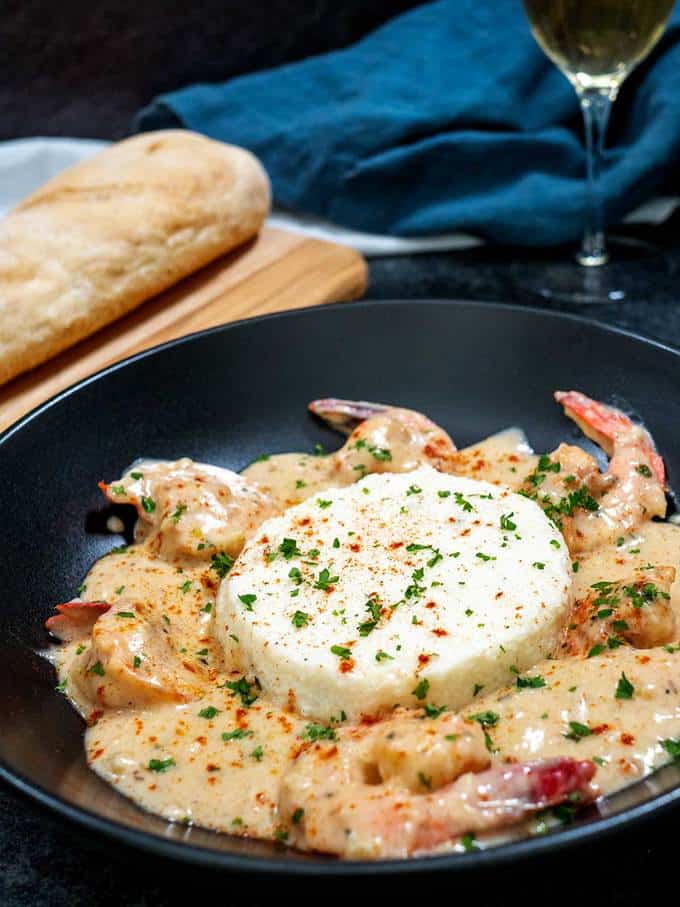 If you liked the recipe for Creamy Cajun Shrimp and Boursin Grits please consider rating it and leaving a comment. I’d love to know how you liked it! 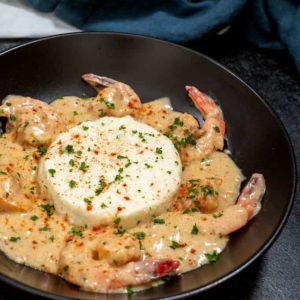