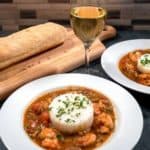 Cajun Shrimp Étouffée is Classic New Orleans at its best. Shrimp étouffée is made with succulent shrimp cooked in a spicy roux-based sauce with the holy trinity of onions, green bell peppers, and celery, along with garlic. It’s a perfect dish to serve at your Mardi Gras festivities or any time that you are craving bold, spicy flavors. Serve it with rice and crusty French bread for an unforgettable meal. Laissez les Bon Temps Rouler!

It is popular in both Cajun and Creole cuisines. It’s made with the “trinity” and is typically finished off with either shrimp or crawfish.

Shrimp, sometimes referred to as prawns is a salt-water crustacean. Crawfish, on the other hand is a fresh water crustacean. Both shrimp and crawfish have a similar taste and can be used interchangeable in recipes such as étouffee.

How to Clean the Shrimp

Generally, I always buy fresh shrimp – with the head and shells still on (Photo 1). The reason is that I feel that I’m getting the freshest shrimp this way.

However, the most time-consuming part of making the Shrimp Étouffée is cleaning the shrimp, i.e., removing the heads (Photo 2), peeling the shrimp, and deveining them (Photo 3).

Anyone who thinks that deveining the shrimp is unnecessary, must have never actually seen how gross the vein can be! The fresher the shrimp, the easier it is to remove the vein.

I actually remove not only the vein on the top of the shrimp, but also the much smaller vein on the bottom (Photos 4 and 5). Out of the two pounds that I started with, I ended up with just under 14 ounces of cleaned shrimp (Photo 6).

The second most time-consuming part of making the Shrimp Étouffée is cutting up the vegetables. However, once everything is cut up, the dish comes together quickly and easily.

I reduced the heat to low and simmered the Étouffée uncovered for about 45 minutes, until the vegetables were tender.

Can frozen shrimp be substituted for the fresh shrimp?

If you don’t have the option of using fresh shrimp, you can use frozen. Just allow the shrimp to thaw by placing them in a colander with cold water running over them. Then drain well.

Can oil be substituted for butter in making the roux.

I like to make the roux with butter because of the richness that it adds. However, you can easily substitute oil for the butter. Often butter is used in both Cajun and Creole recipes.

How do you stop the roux from becoming too dark?

Can the Shrimp Étouffée be frozen?

You can freeze the Shrimp Étouffée once it has come to room temperature. Store it in an air-tight, freezer safe container for 1 to 2 months. Slowly reheat it on the stove until heated through.

Can this dish be made ahead of time?

If you liked this recipe for Shrimp Étouffée, please consider rating it and leaving a comment. I’d love to know how you liked it! 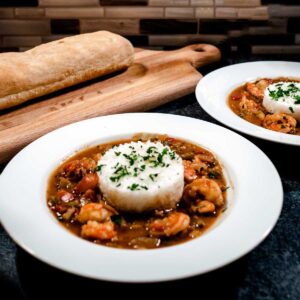