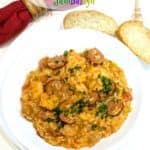 The word jambalaya comes from the Provençal word jambalaia, meaning a mish mash, or mixup. It also means a pilaf (pilau) of rice.

Jambalaya can trace its origins to both Spanish and French cuisines – paella from Valencia and jambalaia from Provence. Other Louisiana dishes such as gumbo and étouffée cook the rice separately. Jambalaya on the other hand has the rice cooked with the other ingredients.

What You’ll Need to Make This Recipe

How I Made This Iconic New Orleans Dish

After about 15 minutes, I removed the cover of the Dutch oven and added the shrimp that I had previously cooked.

I again covered the Dutch oven and cooked the mixture for another 10 minutes or so until the rice was done.

After the 10 minutes, I tasted the Spicy New Orleans Jambalaya to see if it needed any hot sauce, or any more salt or pepper. I actually thought that it was perfect as is!

I served this incredible one-pot Spicy New Orleans Jambalaya with some Crusty French Bread. It was like being in the French Quarter. Laissez les bons temps rouler – Yum!

Is jambalaya the same as gumbo?

Jambalaya and gumbo differ in two respects. First, rice is a key ingredient in making jambalaya whereas gumbo is traditionally served over rice. Second, jambalaya is not roux based. The cooking of gumbo on the other hand starts with a roux.

Is jambalaya a cajun or creole dish?

Technically, with this recipe, the jambalaya is Creole because of the addition of tomatoes.

What is the best type of rice to use in jambalaya?

Most often, jambalaya is made with long-grain rice. Short-grain rice tends to make the jambalaya mushy. You could also use brown rice in the jambalaya, but would need to adjust the cooking time. Jasmine rice and basmati rice could also be used.

Can the shrimp be omitted from jambalaya?

You can definitely omit the shrimp from the jambalaya.

Leftover jambalaya can be stored, covered in the refrigerator for several days and gently reheated.

If you’re a fan of New Orleans cuisine, you should check out these amazing recipes:

I hope you liked this recipe for Spicy New Orleans Jambalaya as much as I do. If so, please consider rating it and leaving a comment. Also, if you’d like to receive notifications of new posts by email, enter your email address in the Subscribe box. 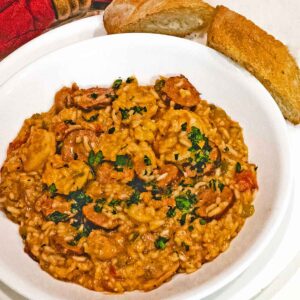