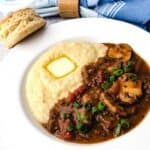 Beef Grillades (pronounced gree-hahds) and Grits is a classic New Orleans dish. The beef is cooked in a flavorful gravy accented with the Holy Trinity of onions, celery, bell pepper, and garlic until it is fork tender. It’s made extra special when served with Smoked Gouda Grits.

Beef Grillades is not only delicious when first made, but also outstanding as leftovers!

Let’s Start With The Beef Part of This Recipe

The basic ingredients for the beef might seem like a lot, but actually come together very quickly.

These are the steps that I went through to put the beef part of this recipe together.

I cooked the beef until it was golden brown, about 3 minutes per side. Then, I repeated this with the remaining beef.

Then, I added the wine and deglazed the pan. I cooked the mixture for several minutes until it was thickened.

I receded the heat to medium low, covered the Dutch oven and cooked the Beef Grillades for around 2 ½ hours or until the beef was fork tender.

Now For the Mushrooms

I enhanced the taste of the Beef Grillades with some mushrooms.

I melted the butter in a large skillet over high heat and added the mushrooms, basil and oregano. I cooked the mushrooms for several minutes until they were browned.

Then, I added the Madeira and I continued cooking the mushrooms until all of the liquid had evaporated. This took several more minutes.

I added the mushrooms to the beef mixture and stirred to combine. Then, I covered the Dutch oven and cooked the Beef Grillades over medium low heat for an additional 20 minutes.

Here’s How I Made the Smoked Gouda Grits

While the Beef Grillades were cooking, I made the Smoked Gouda Grits.

After giving the grits a good stir, I reduced the heat to low and simmered the grits, uncovered until they were thick and tender. This took about 30 minutes.

Before serving the Beef Grillades with Smoked Gouda Grits, I thinned the Grillades to the perfect consistency with some additional beef broth.

I served the Beef Grillades with Smoked Gouda Grits with my Southern Flaky Biscuits. What a delicious meal! Yum!

Can stone ground grits be used in place of the quick grits?

Where did Grillades and Grits originate?

Not surprisingly, Grillades and Grits originated in New Orleans where it is typically served for breakfast or brunch.

Is there a substitute for the beef in this recipe?

Generally, either beef or veal is used in making Grillades. However, you could also use pork.

Can the wine and/or Madeira be omitted in this recipe?

Can a different cheese be used in the grits?

Feel free to substitute the cheese of your choice for the Smoked Gouda. Alternately, you can leave the cheese out altogether.

If you’re a fan of New Orleans Cuisine, you should try these amazing recipes:

I hope you liked this recipe for Beef Grillades and Smoked Gouda Grits as much as I do. If so, please consider rating it and leaving a comment. Also, if you’d like to receive notifications of new posts by email, enter your email address in the Subscribe box. 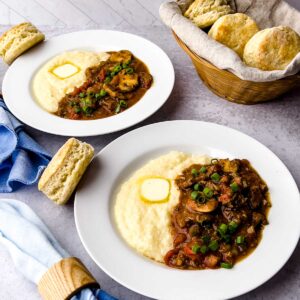