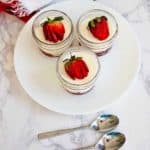 Homemade Yogurt is super simple to make and beneficial to one’s heath. In addition to its probiotic benefits, yogurt contains calcium, protein, potassium, phosphorus, and magnesium along with vitamins B6 and B12. The fermentation of milk and yogurt with live and active cultures requires precise temperature control making Sous Vide the perfect technique for making Yogurt. 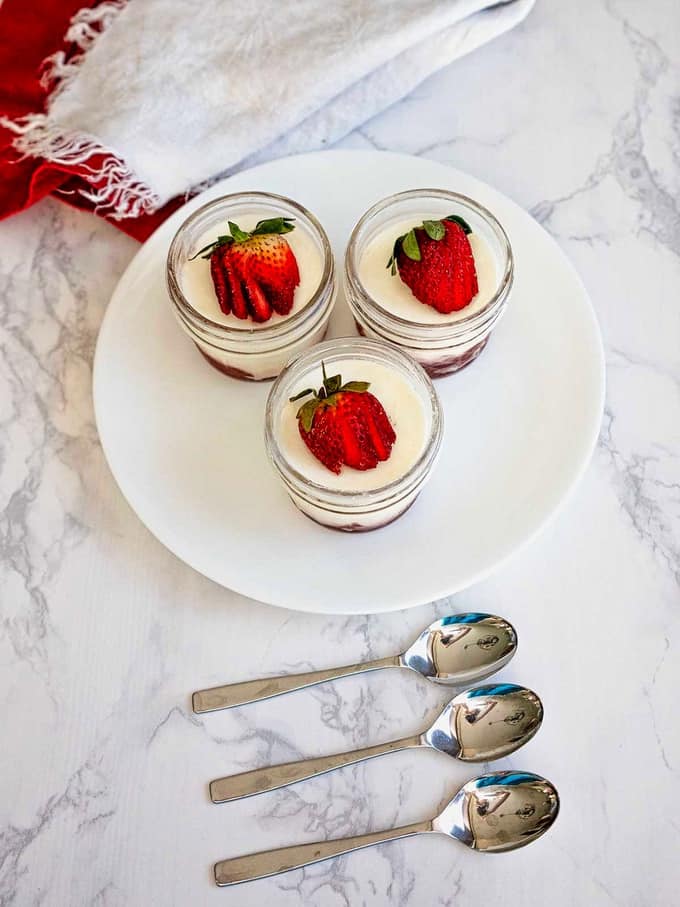 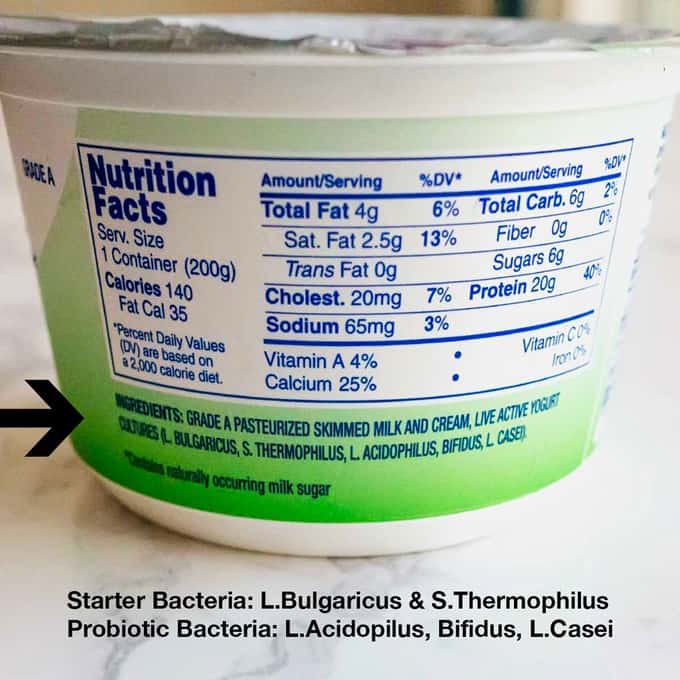 In addition to its probiotic benefits, yogurt is also high in calcium and protein, and contains vitamins B6 and B12 along with potassium, phosphorus, and magnesium.

Outside of the 95° F to 115° F temperature spectrum, either the yogurt will fail to properly coagulate (less than 95° F), or its good bacteria will die leaving the way for bad bacteria to grow (greater than 115° F).

I used the following ingredients to make the Yogurt Fruit Cups: Whole milk, plain yogurt with live and active cultures (containing both starter bacteria and probiotic bacteria), and Simply Fruit. Rather than whole milk, I could have used low-fat milk or skim milk. 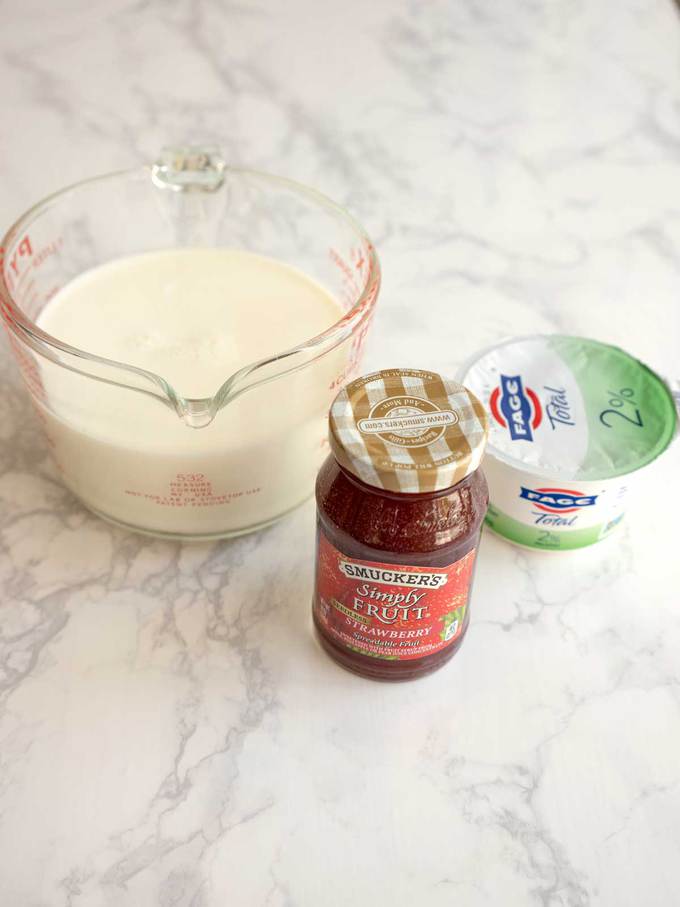 For the starter yogurt, it’s imperative that you use one with live and active cultures. Otherwise, the fermentation will not occur.

While I used strawberry Simply Fruit, I could have also used a different fruit and/or jam or preserves. The idea was to flavor the yogurt with something that I liked!

Then you need something deep enough to allow the water to circulate. My container is the 12-quart Camware square polycarbonate food storage container.

As I’ll discuss in a minute, I also needed a thermometer and water-tight containers in which to actually make the yogurt. For the containers, I used 4-ounce mason jars with lids and bands.

I started by heating the milk to 185° F. While this step is not crucial, the heat actually alters the whey proteins in the milk and helps create a finer and more dense consistency in the yogurt. 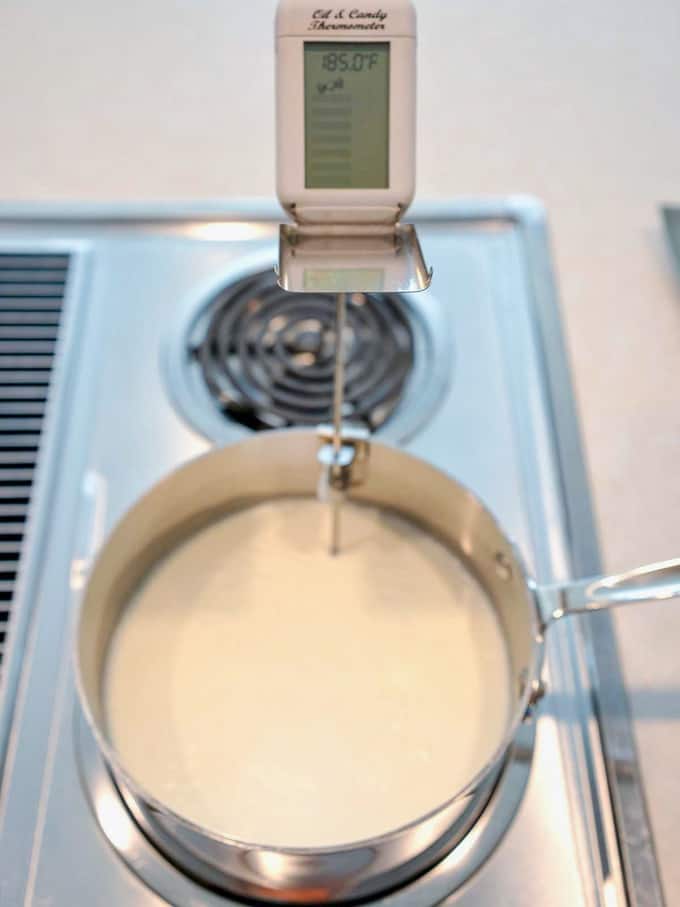 Once the milk reached 185° F, I removed it from the heat and poured it through a fine mesh strainer into large measuring cup. Then, I let the milk sit until it reached 110° F. As previously mentioned, 110° F is the perfect temperature to achieve the fermentation necessary for making yogurt.

During this time, which took about 30 minutes, I stirred the milk occasionally to ensure that it didn’t form a film on the top. I could have put the heated milk in an ice bath to speed up the cooling.

While I was waiting for the milk to cool to 110° F, I added about a tablespoon of the Simply Fruit to the bottom of each of the 4-ounce mason jars that I had sterilized. I also, heated the water in my Sous Vide container to 110° F with the immersion circulator. 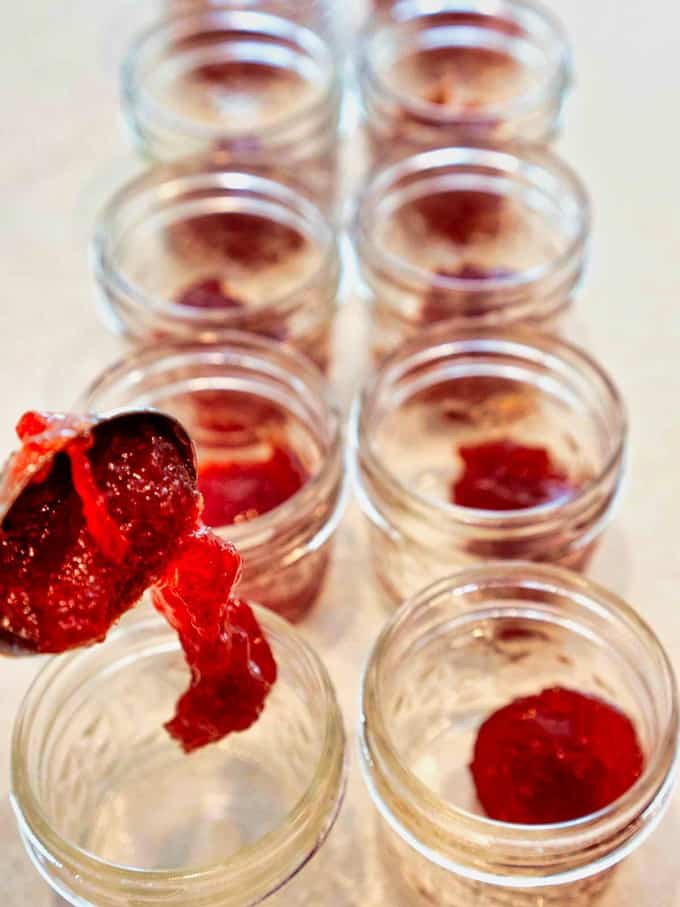 After the milk reached 110° F, I whisked together a small amount of it with some yogurt with live and active cultures. Then, I added the mixture back to the milk and whisked to combine. 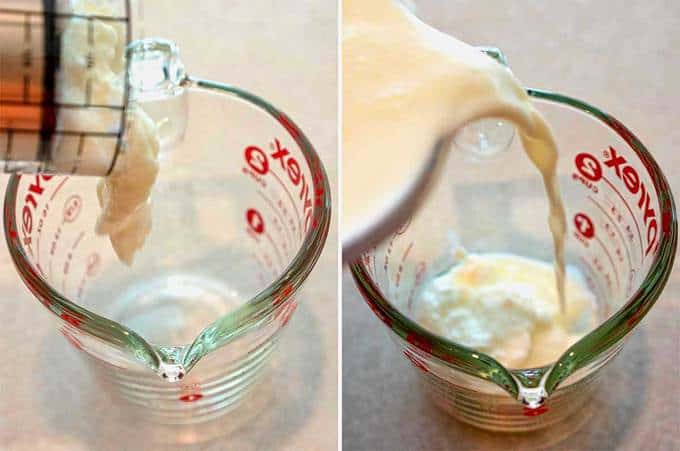 Next, I poured the milk mixture into each of the mason jars with fruit. I added the rest of the milk mixture to another mason jar to use as starter for the next batch. Finally, I screwed on the lids and bands. 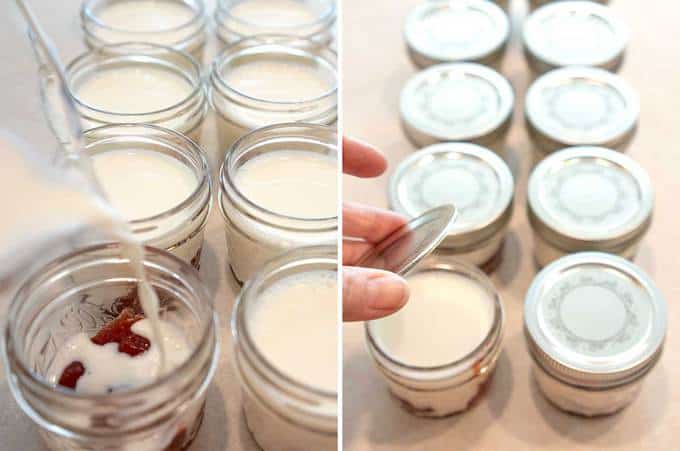 I carefully lowered each of the mason jars into the 110° F water and walked away. 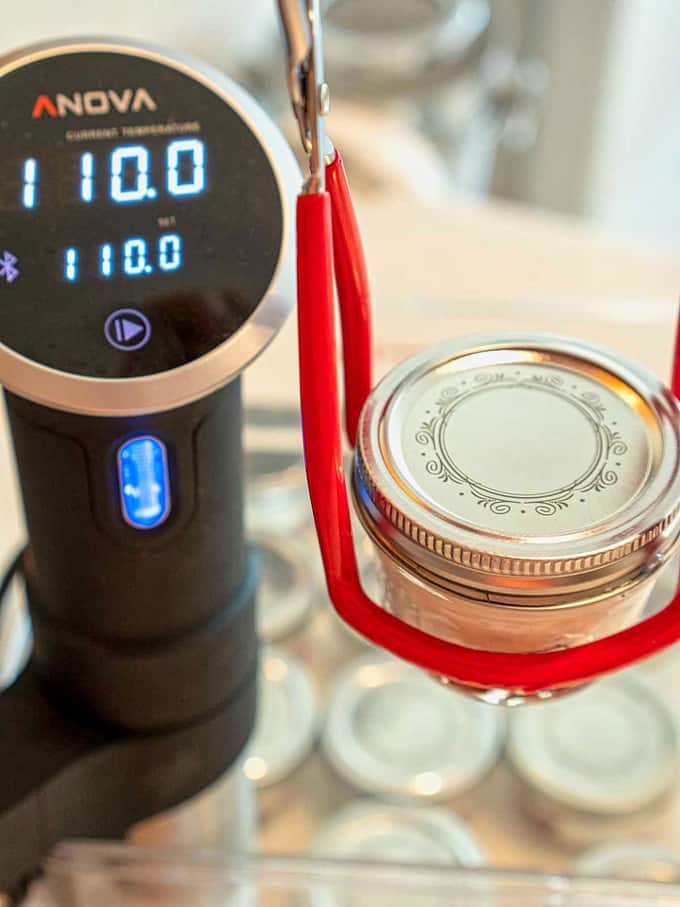 After 5 hours, the yogurt was ready! I could have left it in the 110° F water bath for up to 24 hours. However, the longer it sits in the water bath, the more tart the yogurt becomes. I personally don’t like my yogurt super tart!

I removed the mason jars from the water and allowed them to cool for about 15 minutes. Before refrigerating the yogurt, I unscrewed each the lids and poured off the whey that had accumulated on top. 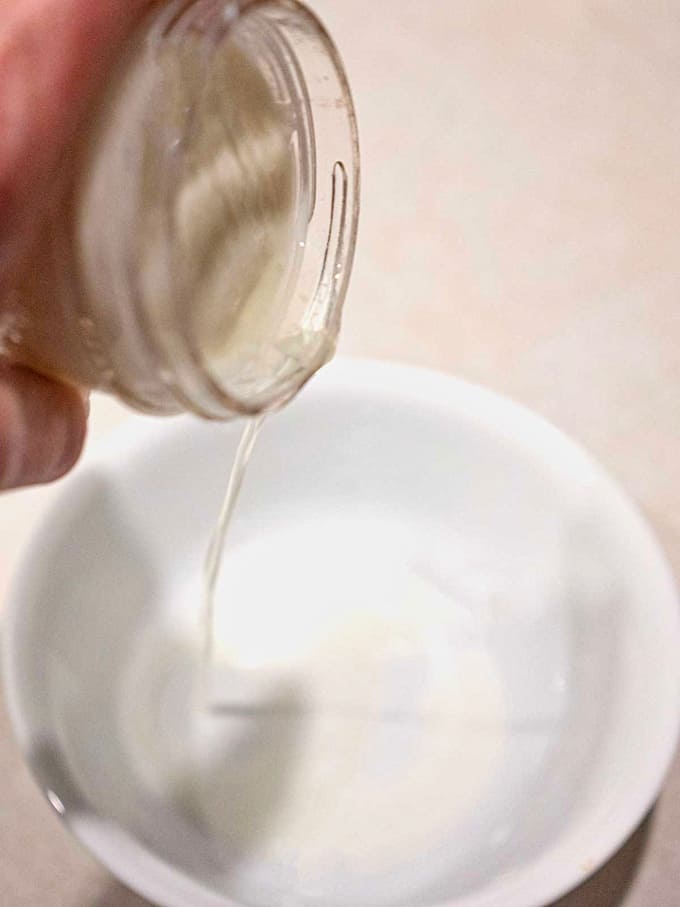 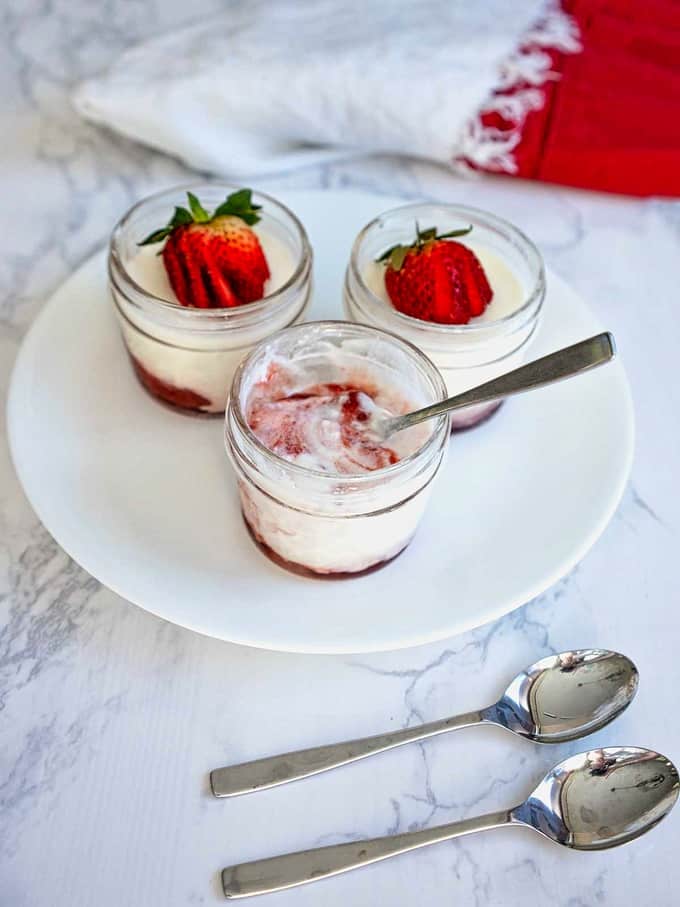 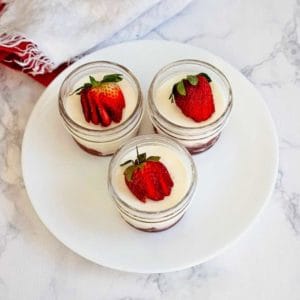