Thin Crust Pizza is the ultimate in simplicity and taste. For the past several months, Susan and I have been experimenting with making pizza. We thought that we had discovered the perfect pizza crust until we tried America’s Test Kitchen Thin Crust Pizza.

The crust is similar to the Neo-Neopolitan Pizza Dough from Peter Reinhart’s Artisan Breads Every Day that we used for the Margherita Pizza. However, I think it’s preferable for two reasons.

First, it makes enough dough for three crusts rather than five. Second, the food processor does all of the work, rather than the hand mixing required for the Neo-Neopolitan Pizza Dough.

Ingredients for the dough

Starting with the pizza dough for the thin crust pizza, I used the following ingredients: Bread flour, salt, sugar, yeast, oil and water. 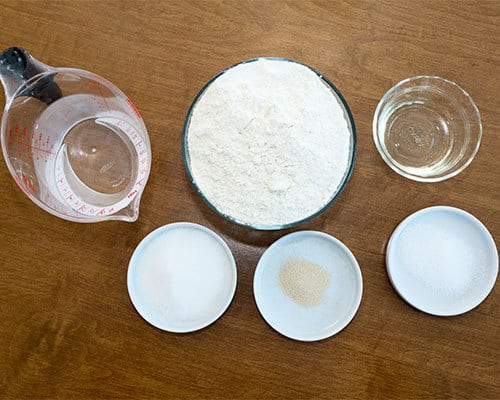 I added all of the flour, sugar and yeast to the bowl of my food processor fitted with a metal blade. Then, I processed it for about 5 seconds. With machine running, I slowly added water through the feed tube. I processed the mixture until dough was just combined and no dry flour remained. This took about 10 seconds. 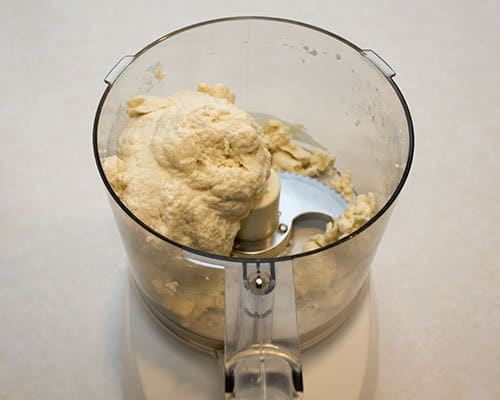 I let the dough stand for about 10 minutes. Then, I added the oil and salt. I processed it for about 45 seconds, until it was satiny and cleared the sides of the bowl. 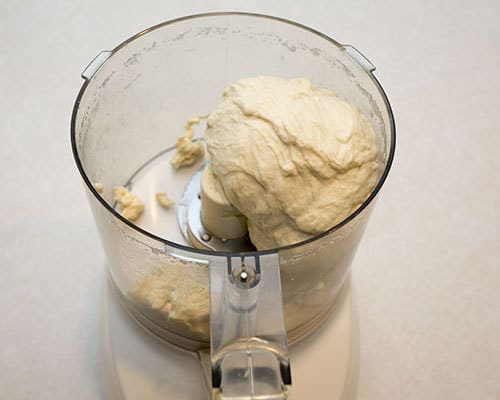 Next, I removed dough from bowl of the food processor. I kneaded it briefly on lightly oiled piece of parchment paper until it was smooth. This took about 1 minute. Then, I shaped the dough into 3 tight balls. Each one was about 9 ounces each. I lightly oiled each ball and placed each piece in a Ziploc sandwich bags. Then, I refrigerated the dough for at least 24 hours and up to 3 days. 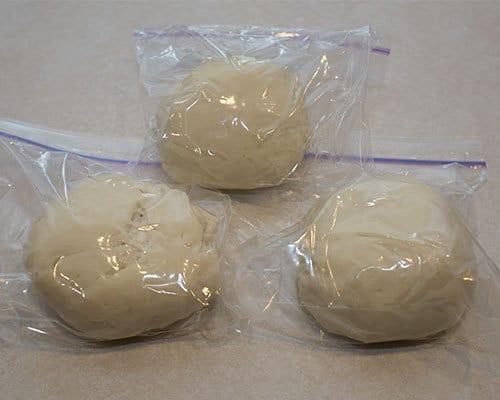 Ingredients for the sauce

The day that we made the pizzas, I made the sauce. The ingredients for the sauce included whole canned tomatoes, olive oil, white wine vinegar, garlic, salt, dried oregano and freshly ground black pepper. 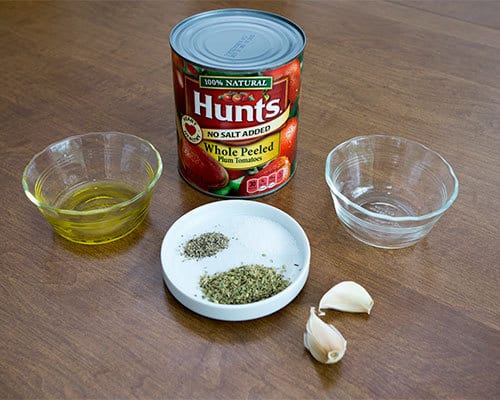 First, I drained the canned tomatoes in a wire strainer. I took care to remove as many of the seeds as possible. 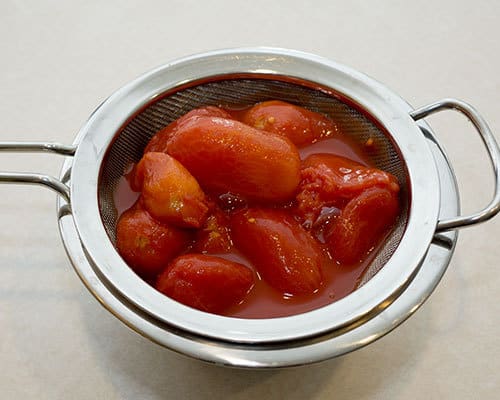 Then, I added the drained tomatoes and remaining sauce ingredients to the bowl of my food processor fitted with a metal blade and processed the mixture until it was smooth. This took about 30 seconds. Next, I transferred the sauce to a covered container and refrigerated it until it was ready to use. 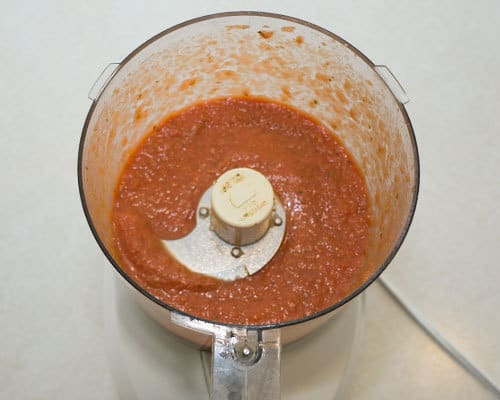 Now for the pizza itself. I used the prepared dough, the prepared sauce, mozzarella cheese, Parmesan cheese and fresh basil. 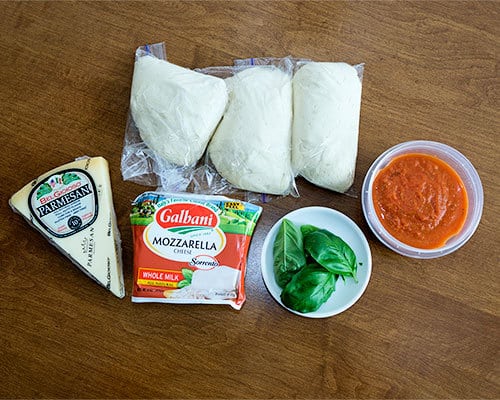 One to two hours before making pizza, I removed dough from refrigerator and removed it from the ziploc bags. Then, I shaped each piece into smooth, tight balls. Next, I placed them on a lightly oiled piece of parchment paper, spacing them at least 3 inches apart. I covered the dough loosely with plastic wrap coated with nonstick cooking spray, and let them stand until ready to for pizzas. 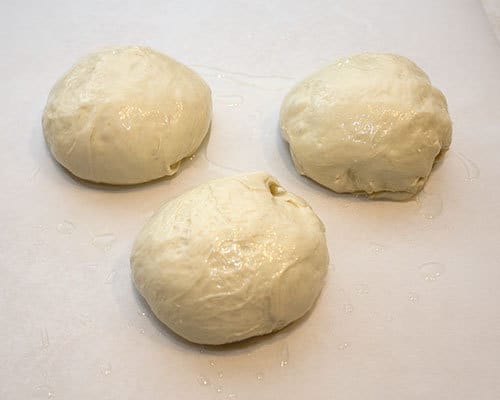 One hour before baking the pizza. I adjusted the oven rack to the second highest position (rack should be about 4 to 5 inches below broiler) and set the pizza stone on the rack.  I then heated the oven to 450° F.

This is where Susan stepped in. She coated one ball of dough generously with flour and placed it on well-floured piece of parchment paper. Using her fingertips, she gently flattened each piece into an 8-inch disk, leaving 1 inch of outer edge slightly thicker than center. She let the dough rest 10 minutes. Using her hands, she gently stretched each disk into a 10-inch round, working along the edges and giving the disk quarter turns as it stretched. Then she transferred the dough to piece of reusable parchment and let it rest for another 10 minutes. Finally, she stretch each disk into a 12-inch round. 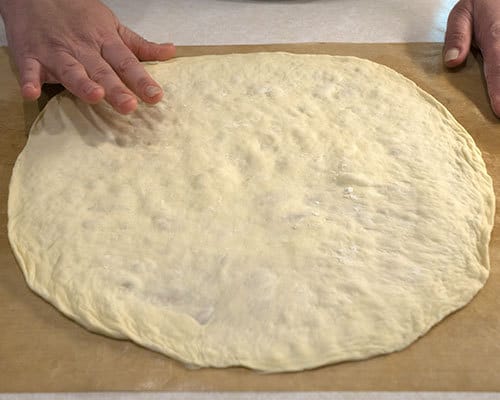 Using the back of a ladle, she spread ½ cup tomato sauce in thin layer over surface of dough, leaving ¼-inch border around edge. 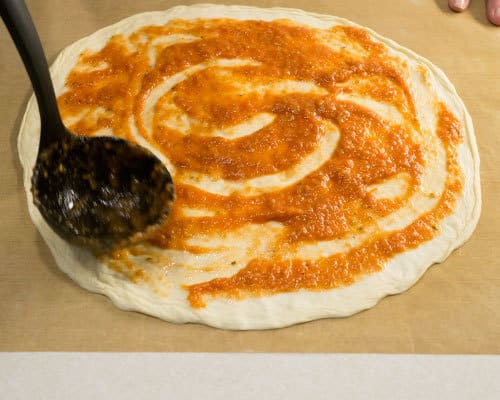 Then she sprinkled on 1 to 2 Tablespoons of chopped basil. Next, she sprinkled ¼ cup of grated Parmesan cheese evenly over sauce, followed by 1 ¼ cups of shredded mozzarella. 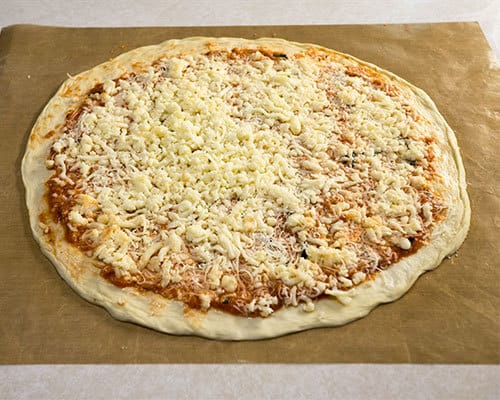 She carefully slid the reusable parchment with pizza onto a pizza peel. 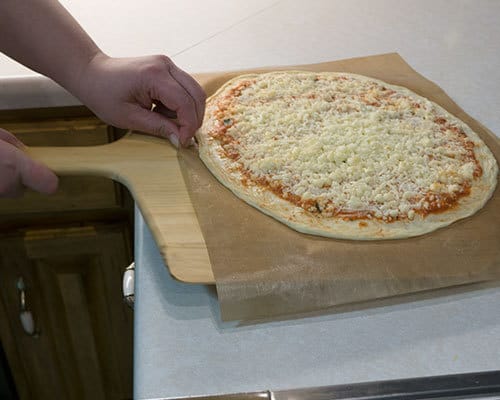 Then she slid the pizza on the reusable parchment from the peel onto the stone and baked it until the crust was well browned and the cheese was bubbly and beginning to brown. This took about 8 minutes. 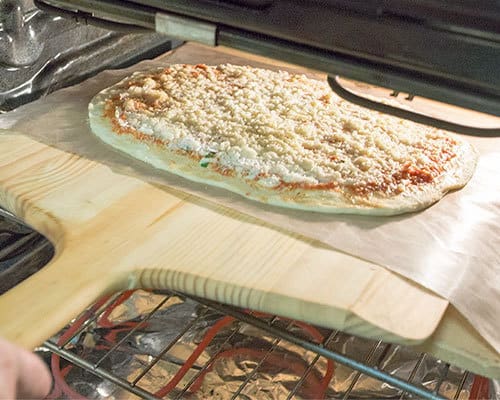 She carefully removed pizza onto the pizza peel, and placed it on wire rack for 5 minutes before slicing and serving.  She repeated this with the remaining ingredients. 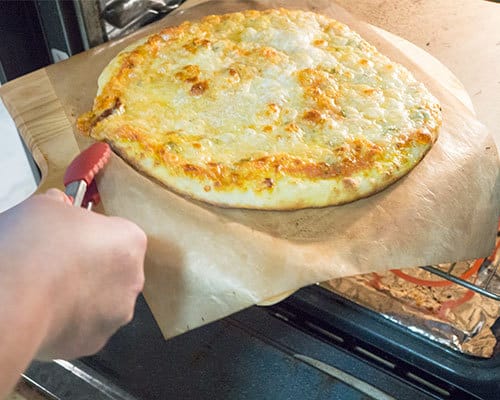 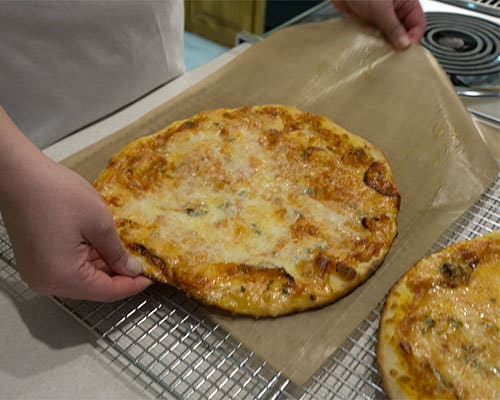 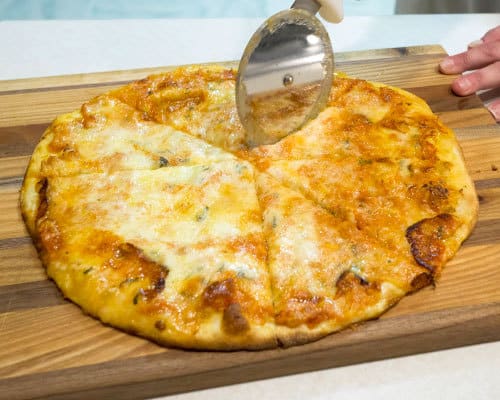 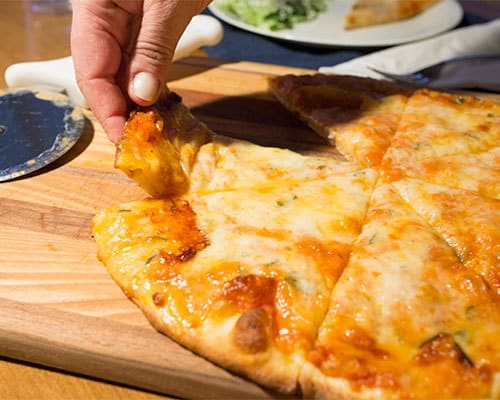 If you’re looking to try a different kind of pizza check out my CPK Rosemary Chicken and Potato Pizza.

I hope you liked this recipe for Thin Crust Pizza as much as I do. If so, please consider rating it and leaving a comment. Also, if you’d like to receive notifications of new posts by email, enter your email address in the Subscribe box. 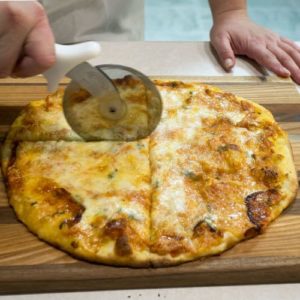