I recently saw a recipe for Vanilla Dreams on the King Arthur Flour site.  What intrigued me about the recipe was that it used Baker’s Ammonia, a.k.a. Ammonium Carbonate, in place of baking powder. 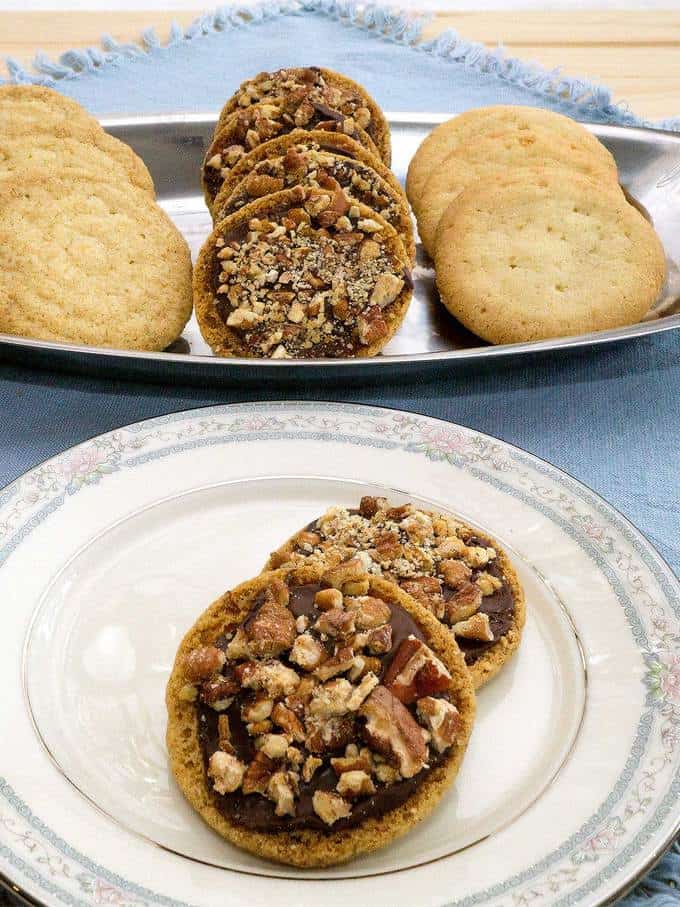 From what I could find, the Baker’s Ammonia is a secret ingredient used by bakeries to produce extra crisp cookies. It is also used in traditional recipes such as Speculoos and Lebkuchen from northern Europe and Scandinavia.

Before using the Ammonium Carbonate, I consulted with the Master Taste Tester whom I also refer to as Mister Wizard because of his extensive scientific background. He said that the Ammonium Carbonate would likely have a strong ammonia smell that would dissipate when heated in the oven and decompose into, among other things, ammonium bicarbonate. The baking powder contains sodium bicarbonate.  He thought that each would likely produce a different taste and texture. During his explanation, Mister Wizard did comment that he was going to send me on both a chemistry and a physics course!

Armed with this knowledge and shamed by what I recalled (or didn’t) from my university chemistry and physics courses, I decided to conduct an experiment making two batches of cookies with the only variable being Ammonium Carbonate versus baking powder. To do this, I cut the King Arthur recipe in half, and used the Ammonium Carbonate in one half and baking powder in the other half.

I used the following ingredients for the Vanilla Dreams: Unsalted butter, granulated sugar, vanilla extract, fine sea salt, Ammonium Carbonate (on the left) and baking powder (on the right), and all-purpose flour. 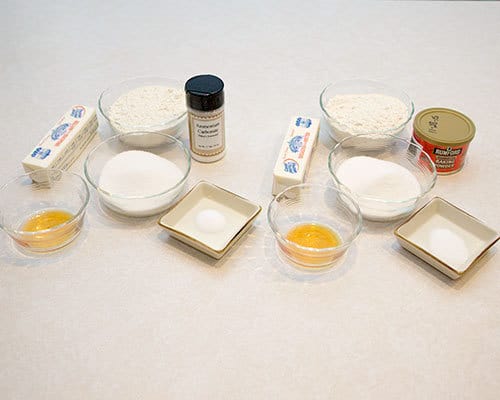 After beating the butter/sugar/vanilla mixture to ensure that everything was well combined, I added the all purpose flour, and beat each mixture until the flour was incorporated. The mixture seemed quite dry, but eventually came together into a shaggy dough.

I partitioned the dough using a #30 ice cream scoop. For reference, the ice cream scoop had a 1-inch diameter and held two teaspoons, or 13 grams.  Because this was an experiment, I actually weighed each piece of dough – each ball of dough weighed 13 grams. 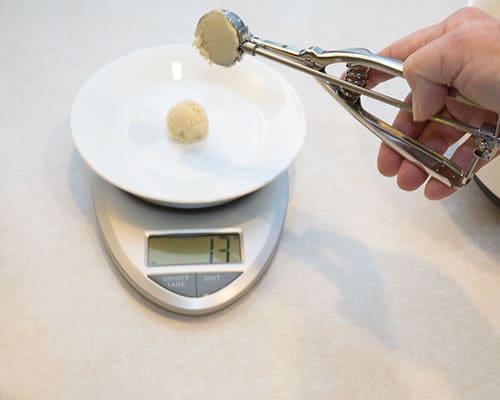 I rolled each piece of dough into a ball, placed it on the parchment lined baking sheet, and flattened it to about ⅜-inch. I used the food pusher from my food processor to do this. It not only had a circular design on the bottom, but also resulted in the perfect amount of flattening.

Into a 300° F oven the cookies went for about 20 minutes, until they were lightly browned around the edges.

I transferred the cookies to a wire rack to cool completely. 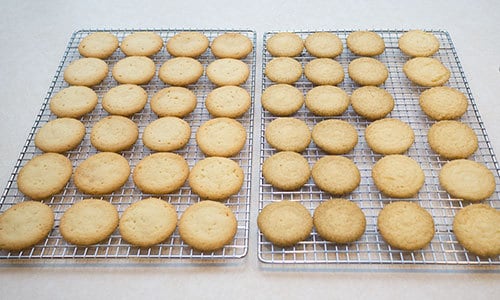 Now came the moment of truth: Did the use of Ammonium Carbonate produce a cookie that was different in texture and/or taste from the one using baking powder? The answer is yes. The cookies made with the Ammonium Carbonate were a bit flatter, had small holes on the surface (presumably because of the release of the gases), were more crispy, and had an overall better taste.  Interestingly, the cookies made with the baking powder had a very salty taste, even though I used exactly the same amount of salt in each of the recipes. Mr. Wizard thought that the cookies made with the Ammonium Carbonate were significantly better, and said that the salty taste from the others likely resulted from the sodium bicarbonate in the baking powder.  I baked each recipe in two batches. The first batch of the baking powder cookies were a bit thicker than the second batch as can be seen in the above picture on the right. The circular pattern resulting from the flattening of the cookies disappeared in both recipes. 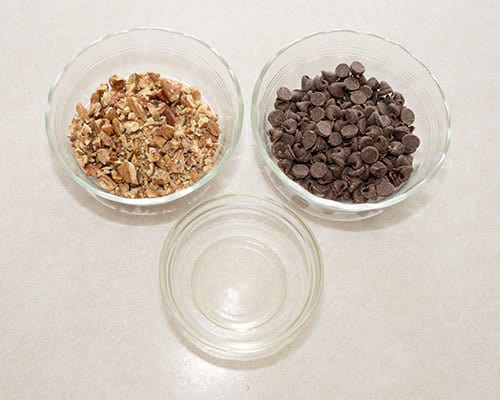 I added the oil to the chocolate chips and microwaved them in 30-second intervals until they were almost melted. The addition of the oil helps the chocolate to set as it cools. 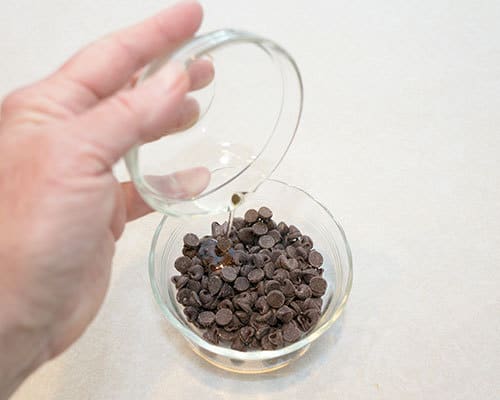 I used an off-set spatula to spread the chocolate on the bottom of each cookie, and then dipped the cookie in the crushed pecans.

I placed the cookies on a wire rack to allow the chocolate to cool completely. 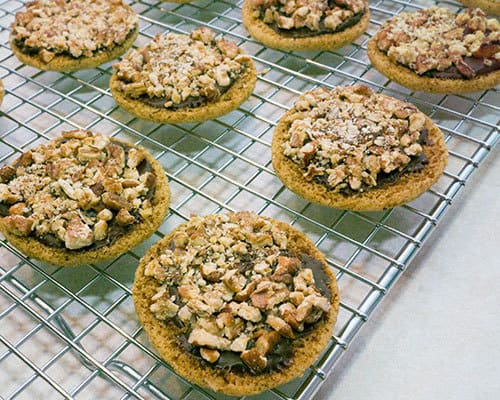 The addition of the chocolate and nuts definitely complimented the salty taste of the baking powder cookies, and produced an incredible cookie – much better than the very expensive supermarket cookies that come in the white bag. The cookies made with the Ammonium Carbonate were outstanding all by themselves. Yum! 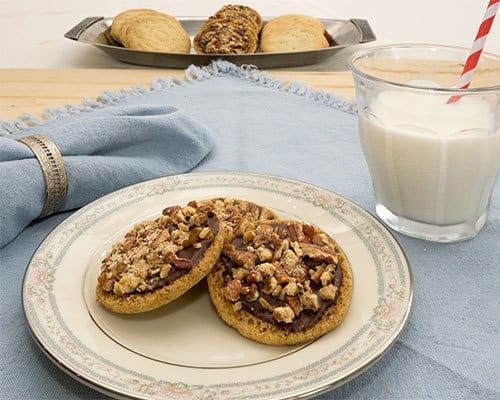 I hope you liked this recipe for Vanilla Dreams  as much as I do. If so, please consider rating it and leaving a comment. Also, if you’d like to receive notifications of new posts by email, enter your email address in the Subscribe box. 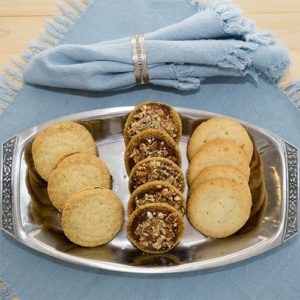