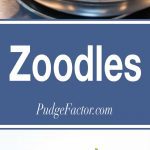 What are Zoodles you ask? Well, they’re an incredibly fresh and heathy alternative to pasta, made with zucchini cut into strands with a spiral slicer. When I brought my spiral slicer home, the Master Taste Tester rolled his eyes, but has come to enjoy its the tasty creations. 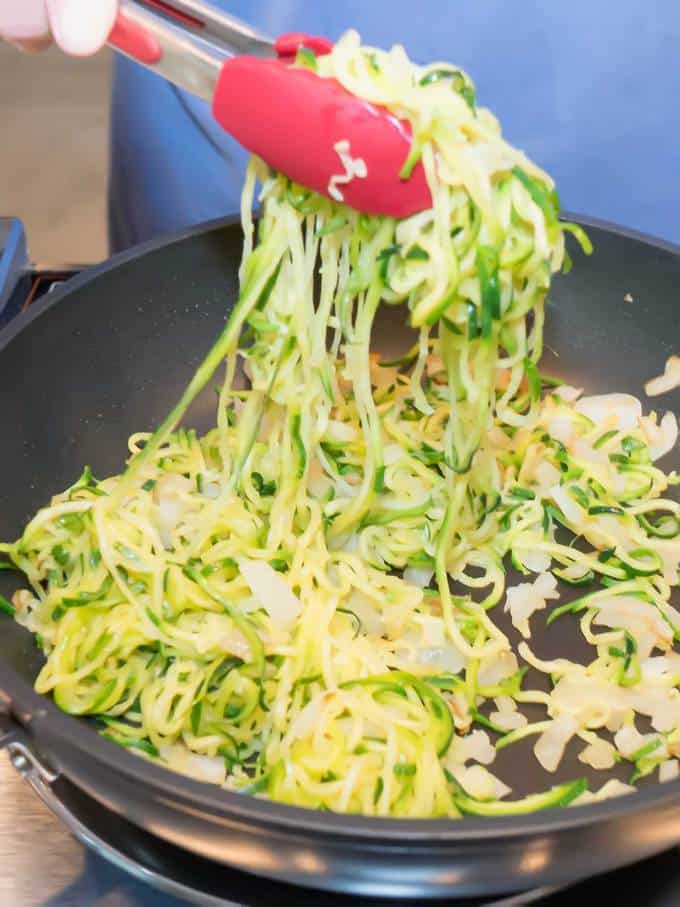 I still had some Bolognese Sauce in the refrigerator that needed to be used, so I suggested Zoodles topped with meat sauce for dinner. The Master Taste Tester quickly agreed! 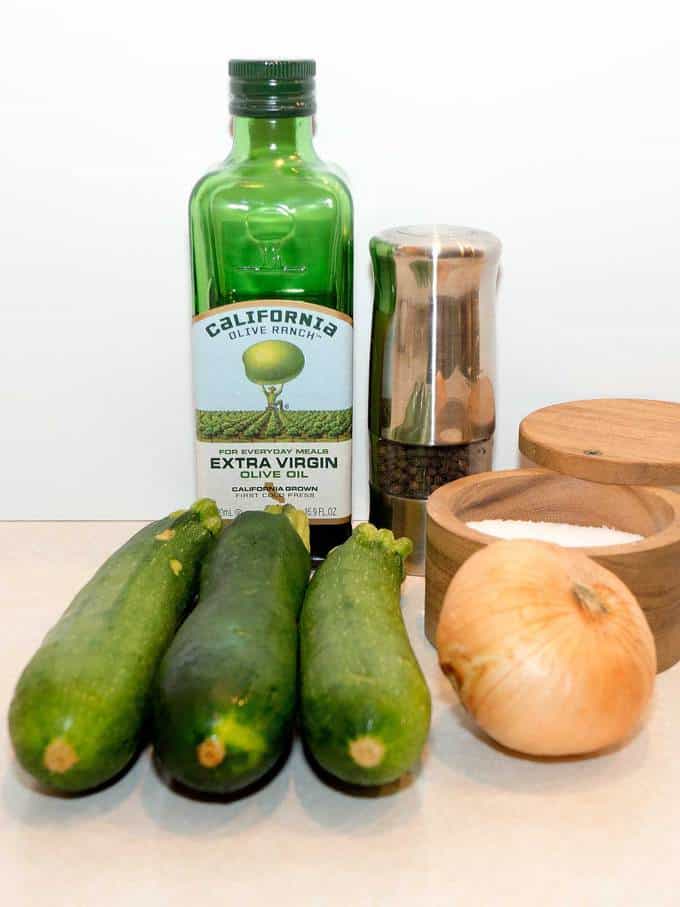 To make the Zoodles, I started by spiralizing the zucchini. 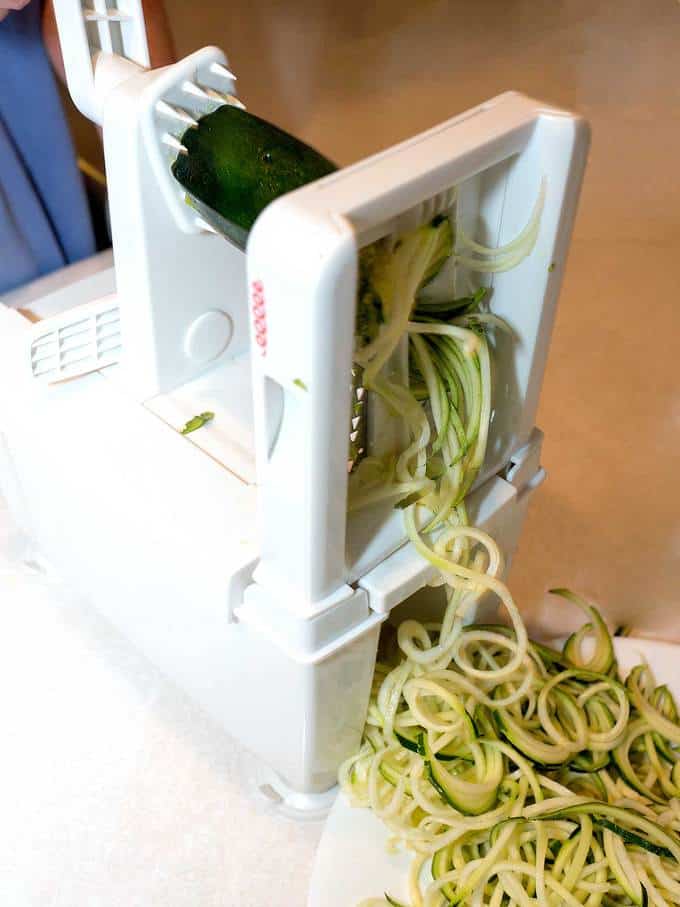 In case you didn’t know, zucchini has a lot of water in it. Therefore, I spread the spiralized zucchini on a paper towel lined baking sheet, and sprinkled on some salt to aid in pulling out the water. 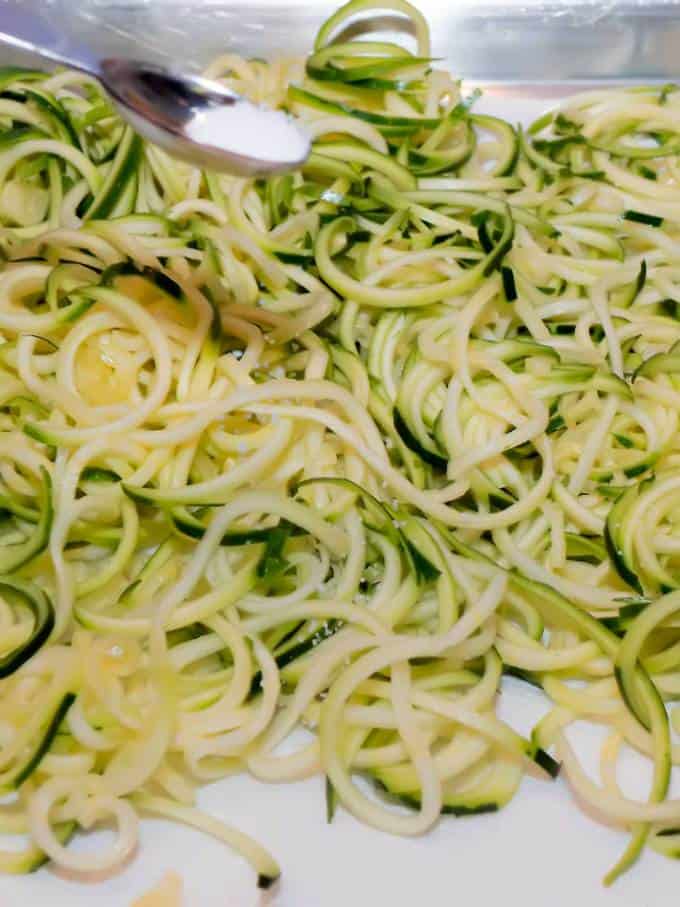 In the meantime, I added the chopped onions to a 12-inch skillet with olive oil over medium heat. The idea here was to sauté the onions until they were tender before adding the zucchini. 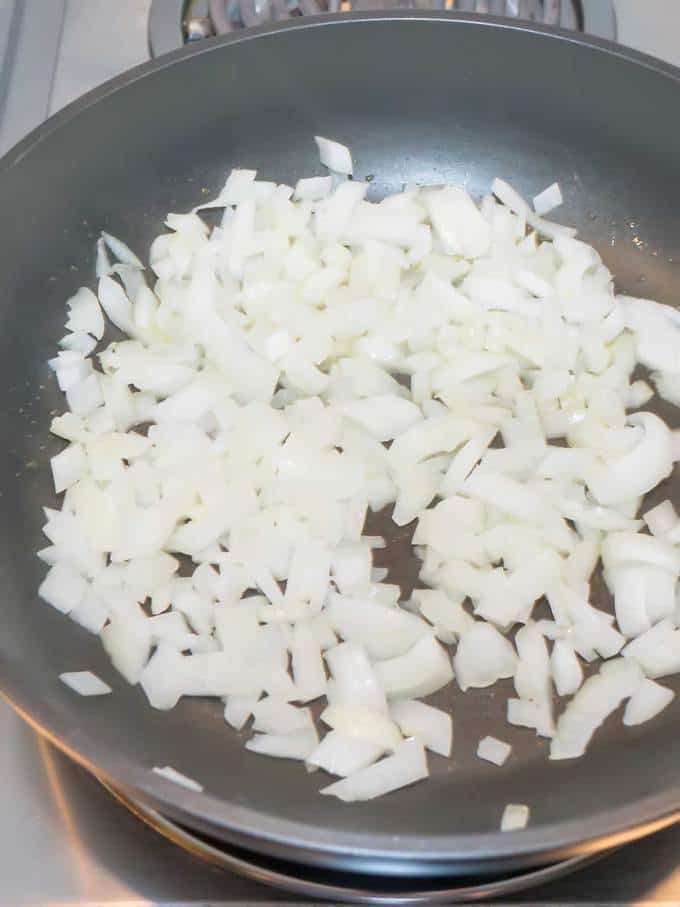 After about 10 minutes, I blotted the zucchini with paper towels, and transferred them to another double layer of paper towels for about 5 minutes or so. 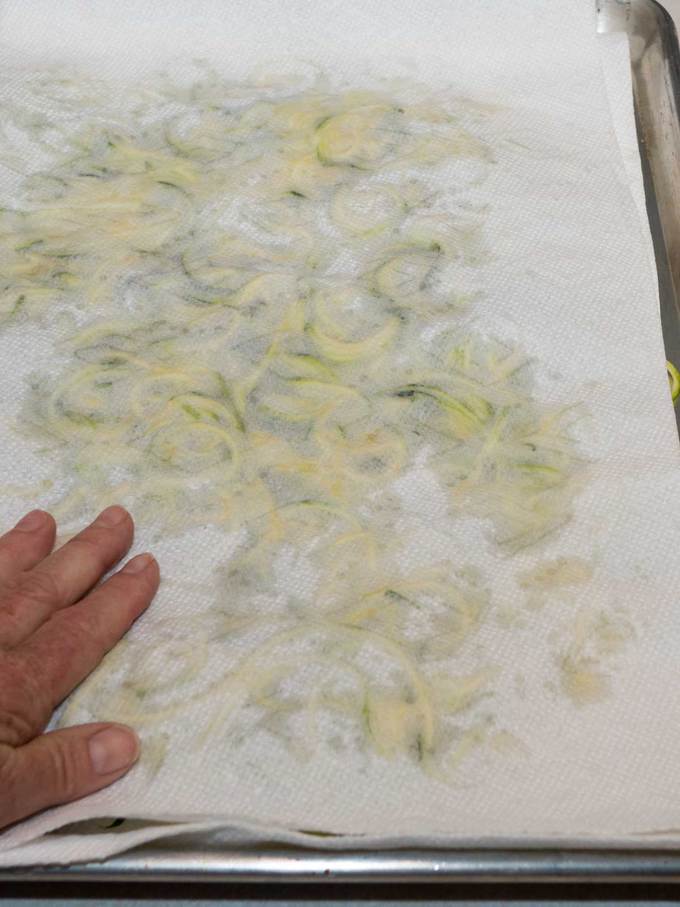 There was still a significant amount of liquid in the zucchini, so I gathered them in the paper towels, and proceeded to squeeze as much of the liquid from them as possible. The reason that I did this is that I wanted to sauté the zucchini, not boil it. Until the liquid is gone, the temperature stays at the boiling point of 212°F which is not high enough to produce a good sauté! 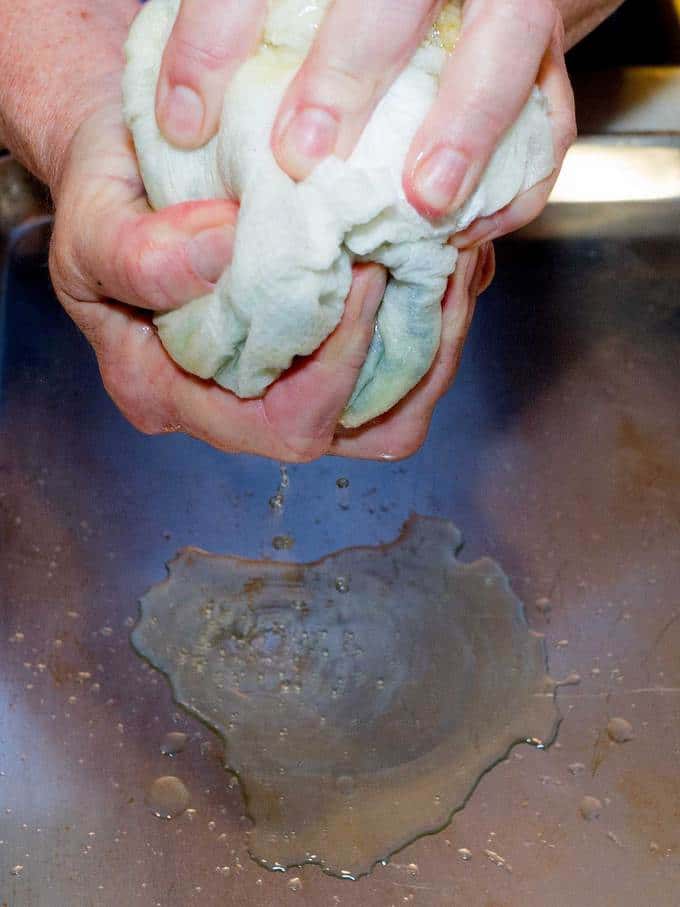 I added the zucchini to the onions and cooked the mixture over medium heat for about 5 minutes, until the zucchini was “al dente.” 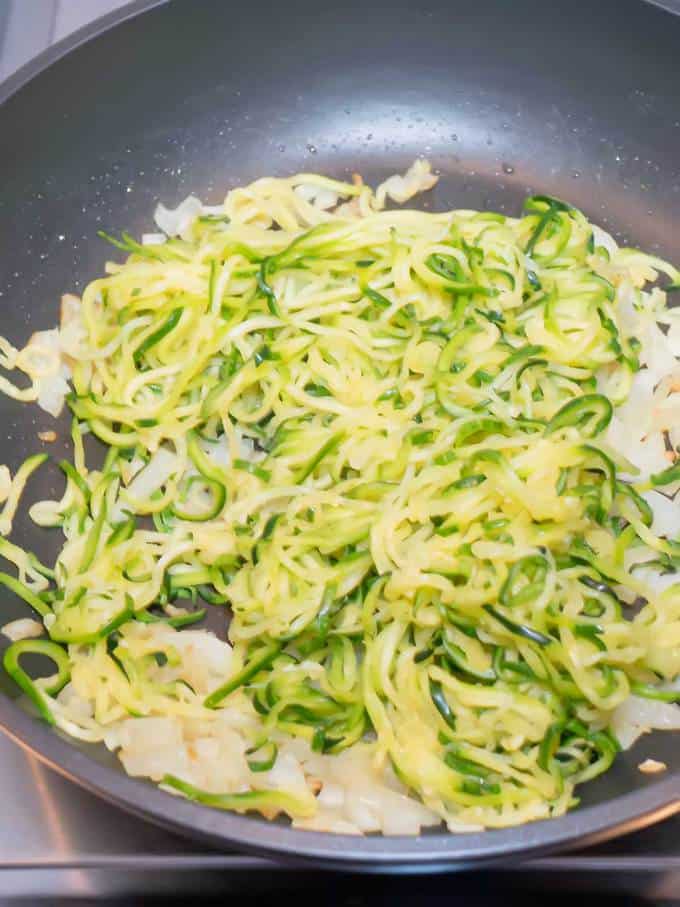 I served the Zoodles topped with Bolognese Sauce. The Master Taste Tester quickly concluded that the zoodles should not be viewed as alternatives for pasta, but rather as a delicious base for the meat sauce, or as a tasty vegetable on its own. Yum! 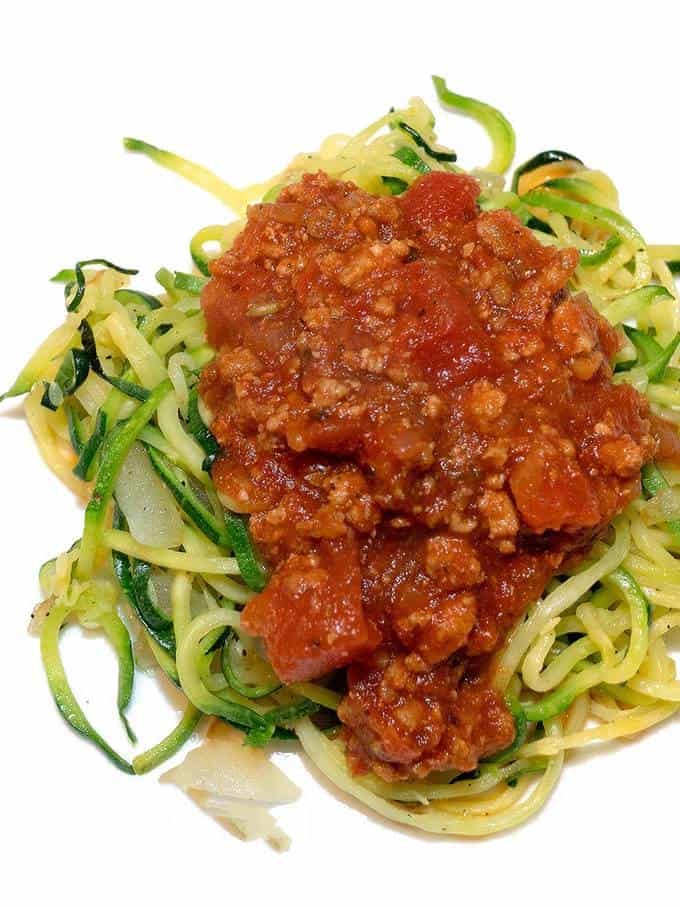 I hope you liked this recipe for Zoodles as much as I do. If so, please consider rating it and leaving a comment. Also, if you’d like to receive notifications of new posts by email, ever your email address in the Subscribe box. 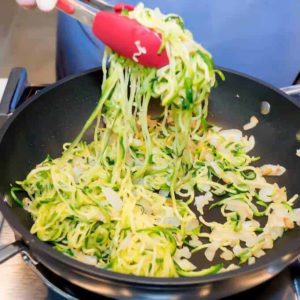 What are Zoodles you ask? Well, they're an incredibly fresh and heathy alternative to pasta, made with zucchini cut into strands with a spiral slicer. When I brought my spiral slicer home, the Master Taste Tester rolled his eyes, but has come to enjoy its the tasty creations.
5 from 1 vote
Print Pin Rate
Course: Side Dish
Cuisine: American
Prep Time: 15 minutes
Cook Time: 15 minutes
Total Time: 30 minutes
Servings: 2 servings
Calories: 133kcal
Author: Chula King