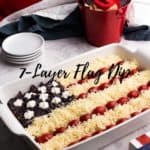 7-Layer Flag Dip is a traditional Mexican dip with layers of refried beans, guacamole, salsa and sour cream mixed with taco seasoning. It’s topped with grape tomatoes for the red stripes, shredded Monterey Jack cheese for the white strips, and crushed blue tortillas with sour cream for the stars. It’s perfect for Memorial Day, Flag Day, 4th of July or any time you want to share your summer patriotic festivities with family and friends.

Most of the ingredients for this awesome patriotic dip are those found in traditional 7-layer dips.

How I Made the 7-Layer Flag Dip

Step 1: Preparing the Sour Cream Layer and the Tomatoes.

Before building the dip, I needed to do some minimal prep. First, I combined the sour cream and taco seasoning in a bowl and set it aside.

Then, I cut each of the grape tomatoes in half, lengthwise and set them aside. That’s it!

The first four layers of this dip are standard layers for a 7-layer dip. First, I spread the refried beans on the bottom of a 9 x 13-inch dish (Photo 1).

Finally, I spread the sour cream mixture on top of the salsa (Photo 4).

Then, I repeated the placing of the tomatoes for the second red stripe about an inch and a half from the first stripe.

Before adding the third and fourth stripe, I marked where I wanted the star layer to go. After that, I used six half tomatoes for the two remaining stripes, again spacing them about an inch and a half apart.

For the white stripes, I used shredded Monterey Jack cheese. I carefully placed the cheese between the tomatoes, leaving the space for the star layer untouched.

The 7-Layer Flag Dip was a lot of fun to put together and super simple to build. The finished product was a perfect complement to the summer patriotic festivities. Yum!

Where did you get the colored tortilla chips shown in the pictures?

The colored tortilla chips came from Publix! I was actually just looking for blue tortilla chips for the star layer and was surprised to see the trip-colored chips.

Where did you get the dish you used for the dip?

I got the white 9 x 13-inch dish at Publix. I had several 9 x 13-inch clear dishes that I could have used. However, I thought that a white dish would look the best. This particular dish was quite inexpensive – I was thrilled to find it!

Can you place the first four layers in a different order?

You can definitely place the first four layers in whatever order your like. I generally start with the refried beans on the bottom. Because the sour cream layer was the lightest, I wanted that layer below the Stars and Stripes layers.

Can this dip be made ahead of time?

Like other Mexican dips, this 7-Layer Flag Dip can definitely be made ahead of time. In fact, it’s preferable to make it ahead of time and refrigerate it covered until serving time.

What if I can’t find grape tomatoes?

I like to use grape tomatoes because of their size and shape. If you’re unable to find grape tomatoes, you could also use finely chopped Roma tomatoes that you had seeded.

If you’re looking for other delicious dip recipes, look no further. These are some of my favorite dip recipes:

If you liked the recipe for 7-Layer Flag Dip, as much as I do, please consider rating it and leaving a comment. Also, if you’d like to receive notifications of new posts by email, enter your email address in the Subscribe box. 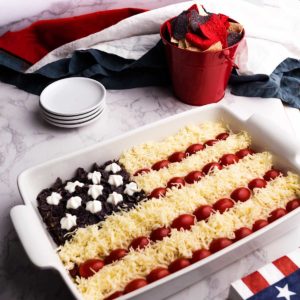