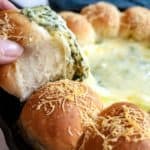 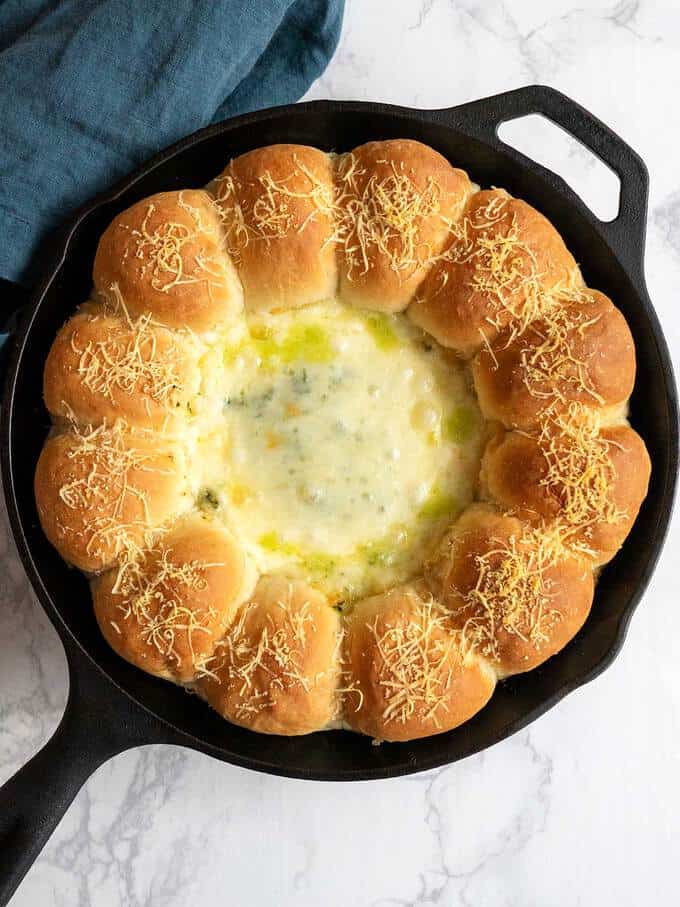 The inspiration for making this outstanding appetizer which I first made on December  7, 2018 came from a similar Tasty recipe. That Tasty recipe called for using frozen dinner rolls. When I couldn’t find frozen dinner rolls that were ball shaped, I decided to make my own rolls! Also, I used one of my own recipes for Spinach Artichoke Dip.

When making any type of bread, it’s important to use filtered water. The reason is that chlorine in tap water can inhibit the yeast growth or kill the yeast. 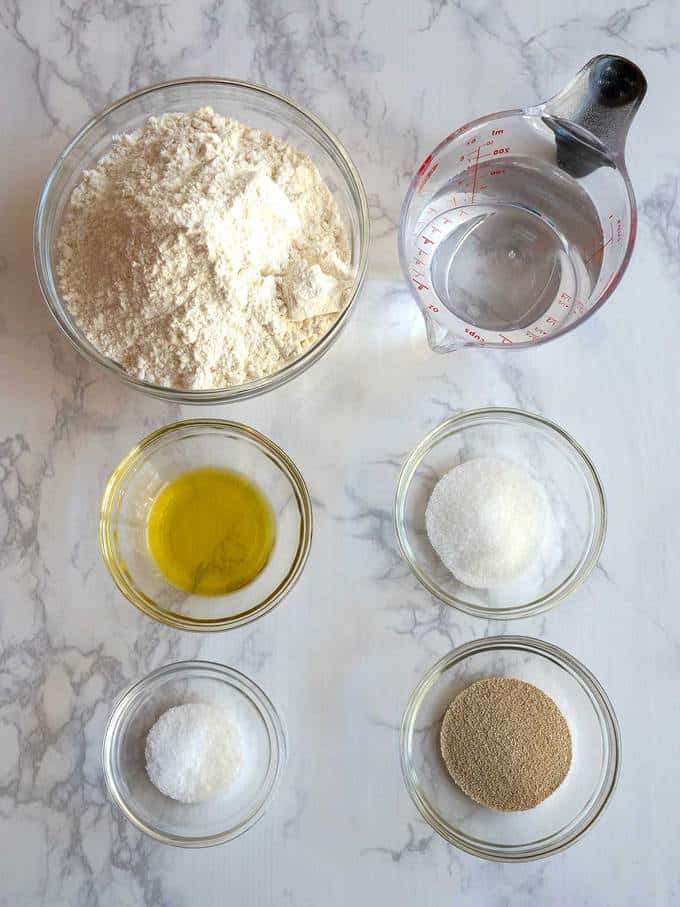 Using the Food Processor to Make the Roll Dough

It takes no time at all to make the dough for the rolls in the food processor. However, if you wanted to, you could use pre-made pizza dough or frozen bread dough that you can buy at a grocery store.

I started by adding the bread flour, sugar, salt, and yeast to the bowl of my food processor that was fitted with the steel blade. Then, I pulse processed the ingredients 5 or 6 times to ensure that they were thoroughly combined. 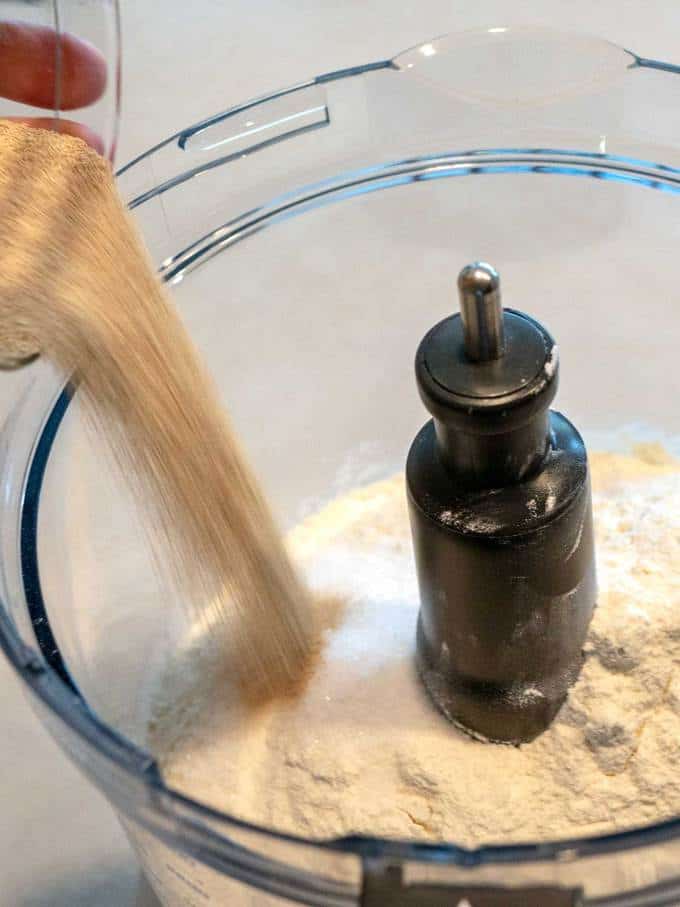 Next, with the food processor running, I added the water and the olive oil through the feed tube. I let the food processor run for about 20 seconds. After 20 seconds, the dough had cleared the sides of the bowl, was not sticking to the blade, and had formed a cohesive mass. I let the dough rest for about 10 minutes. Then, I processed it for an additional 30 seconds. The dough was perfectly kneaded! 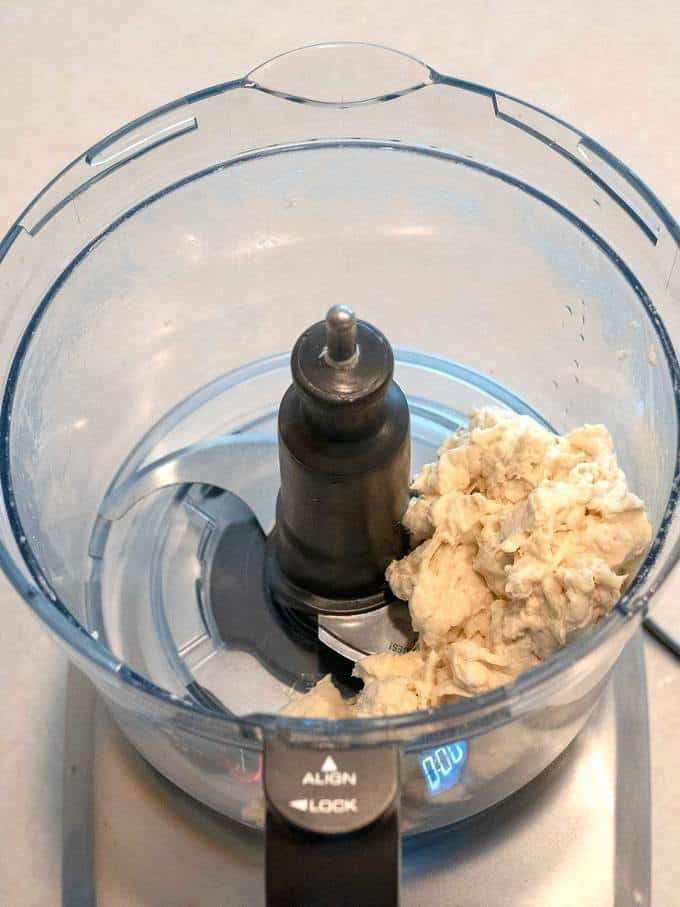 I removed the dough from the food processor, and formed it into a ball. I placed it into an 8-cup measuring cup that I had coated with oil. The reason that I used the measuring cup was that it made it easier to see how much the dough had risen.

After that, I covered the measuring cup with plastic wrap and placed it in my warm oven to allow the dough to double in size. This took about 30 minutes. 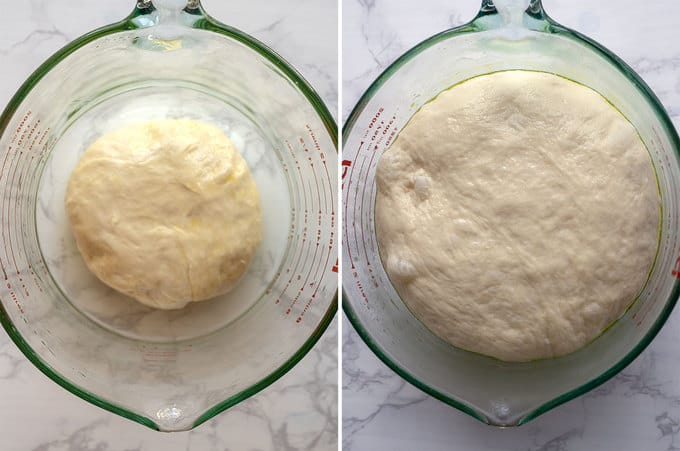 To warm the oven, I turned it on for exactly 1 minute and 45 seconds. I’ve found, at least with my oven, that this produces the perfect environment for proofing the dough.

Once the dough had risen, I turned it out onto a floured surface, and cut it into 12 equal pieces. Being the nerd that I am, I had first weighed the dough (17.16 ounces), and then divided the weight by 12. The result was that each piece of dough weighed 1.43 ounces!

I rolled each of the pieces of dough into a ball. Then, I placed the dough balls in a ring around a 10-inch cast iron skillet that I had brushed with olive oil. 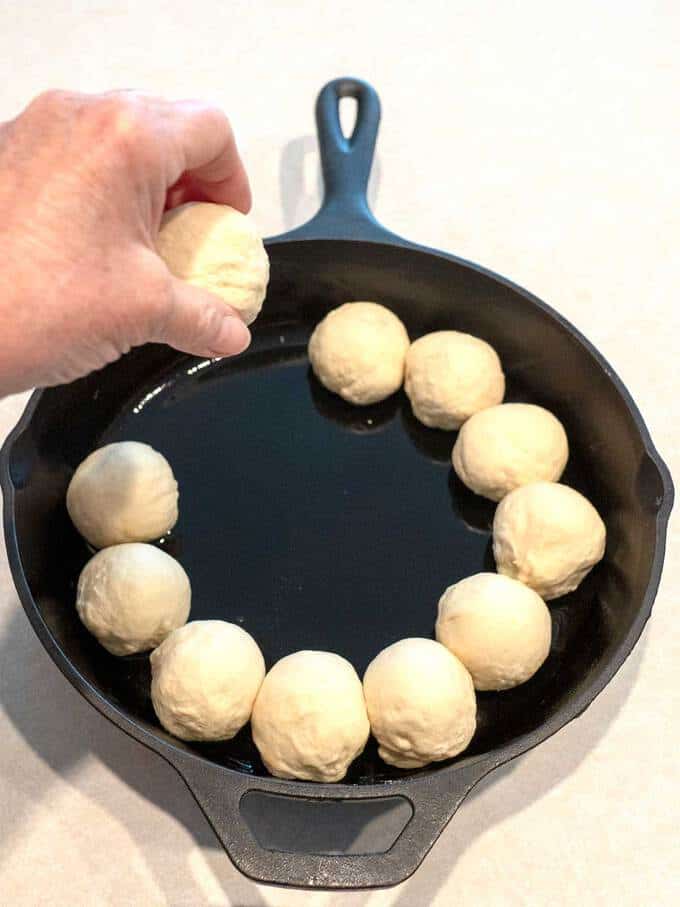 I covered the pan with plastic wrap, and placed it in a warm oven for about 30 minutes until the dough had doubled in size. In the meantime, I made the Spinach Artichoke Dip. 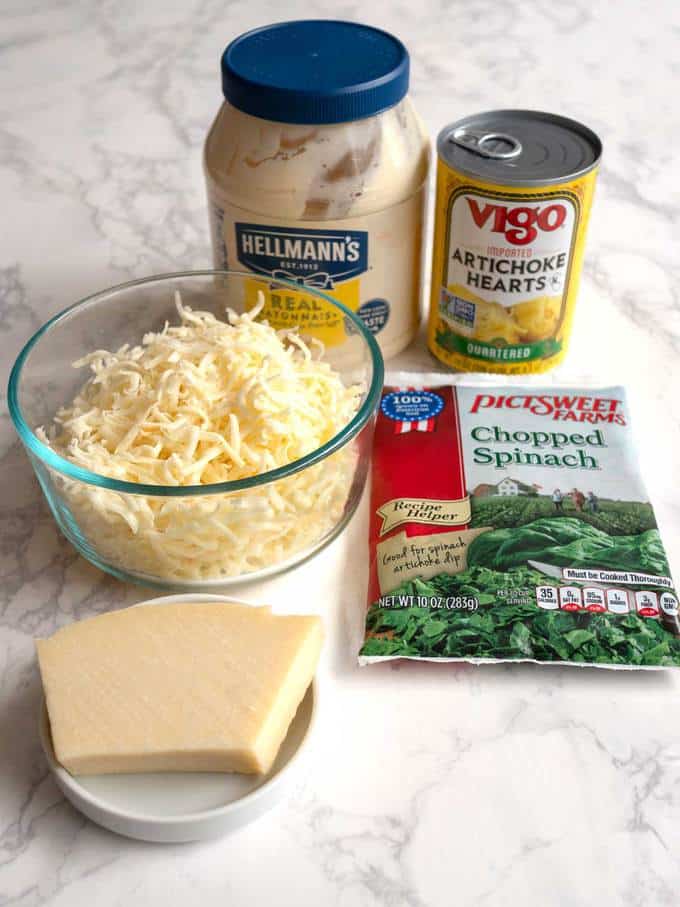 The most time-consuming part of making the Spinach Artichoke Dip was squeezing the spinach to remove as much liquid as possible and chopping the artichoke hearts.

I started by squeezing the spinach with my hands and then in a paper towel to remove as much liquid as possible. Then, I drained the artichoke hearts. Before chopping them, I removed and discarded the tough outer leaves.

Next, I added the mayonnaise, spinach, chopped artichoke hearts, Parmesan cheese, and Monterey Jack cheese to the bowl of my food processor fitted with a steel blade. I pulse processed the ingredients 5 or 6 times until everything was well combined. 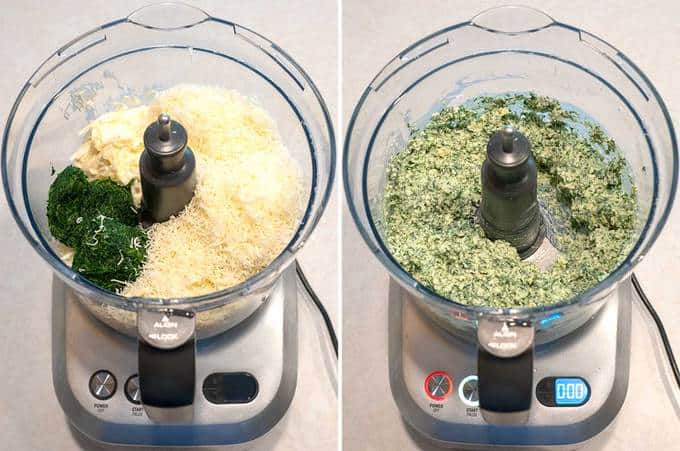 Combining the Spinach Artichoke Bread to the Bread Ring

Once the rolls had risen, I spooned about ⅔ of the Spinach Artichoke Dip in the center. Then, I sprinkled some additional grated Parmesan Cheese on top of the rolls. 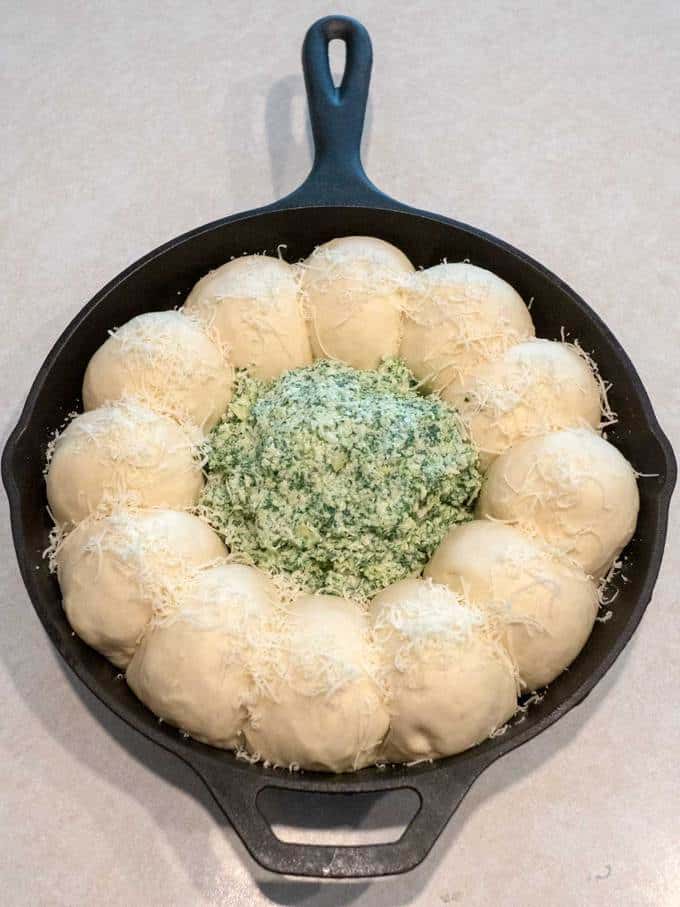 I popped the pan into a preheated 350° F oven for 15 minutes. After 15 minutes, I removed the pan and sprinkled some additional Monterey Jack cheese on the Spinach Artichoke Dip. 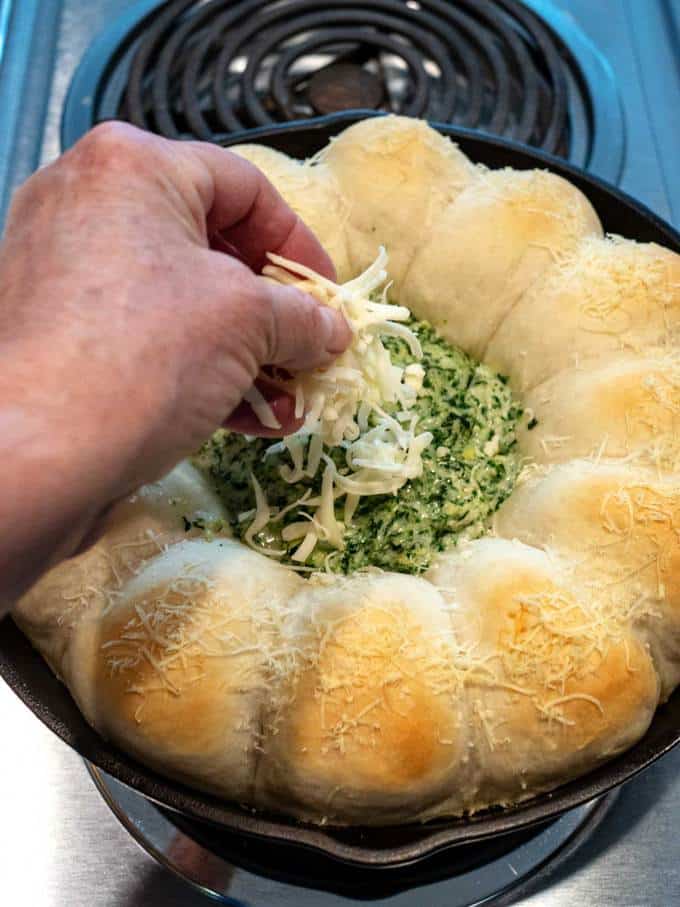 I returned the pan to the oven for an additional 15 minutes. After that time, the rolls were perfectly golden, the cheese was nicely melted, and the Spinach Artichoke Dip was nice and hot.

I removed the pan from the oven. Before serving it, I let the Spinach Artichoke Bread Ring Dip sit for 20 minutes to cool.

I ran a small paring knife around the outside to loosen the rolls. Then, I cut between the rolls so that they would be easy to remove. 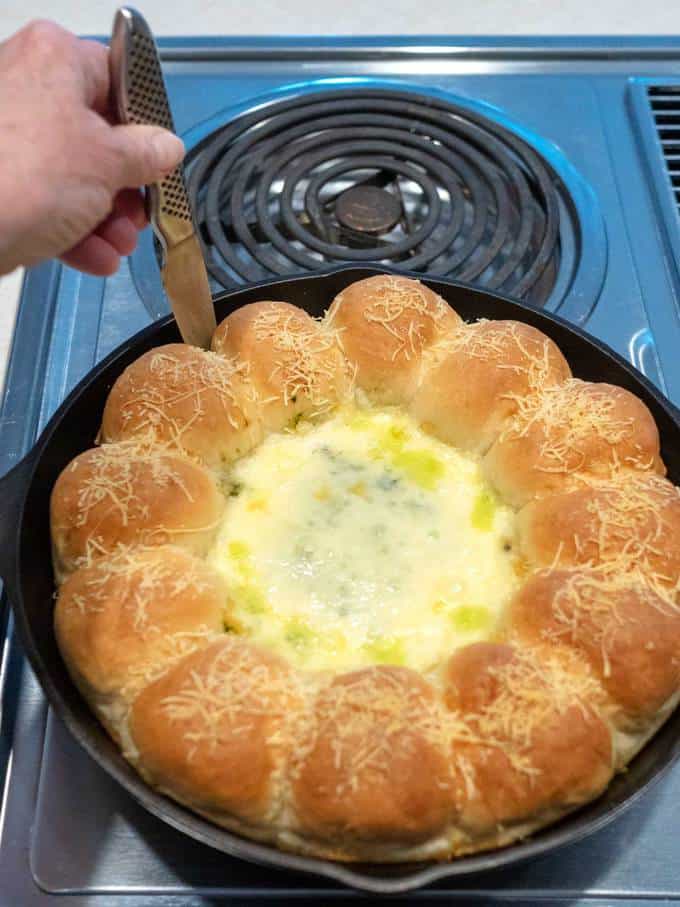 Oh my – The Spinach Artichoke Bread Ring Dip was incredible. It not only looked amazing, but also tasted out of this world!

The Spinach Artichoke Bread Ring not only looked amazing, but also tasted out of this world! Your guests will go crazy when you serve this at your next game day or any time party. Yum! 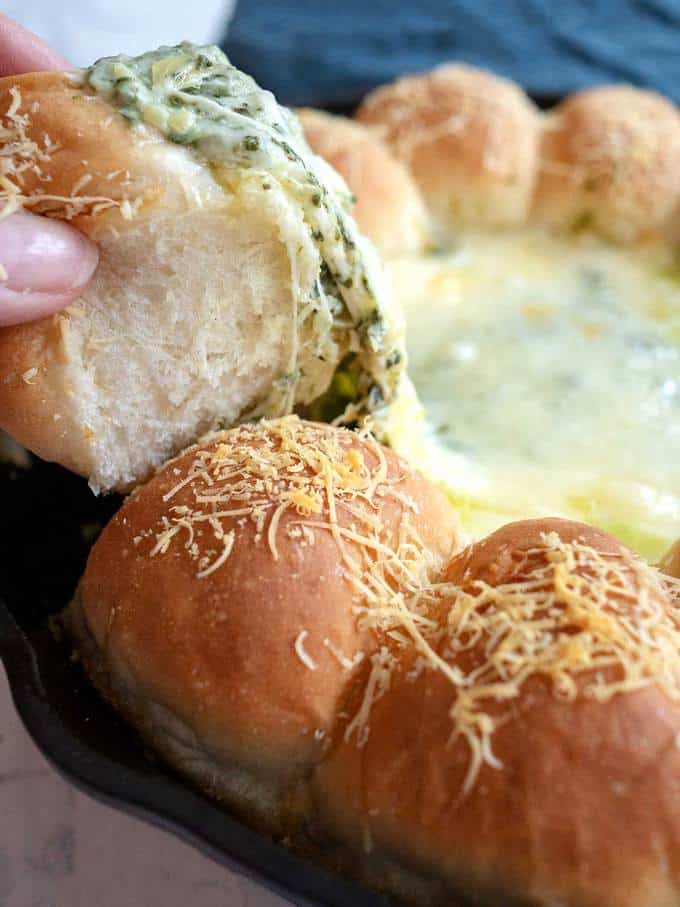 Also, if you’d like other ideas for festive appetizers, check out my: 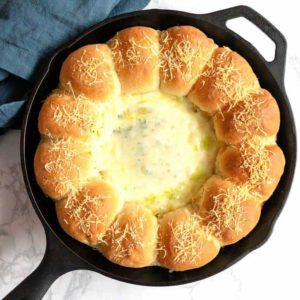