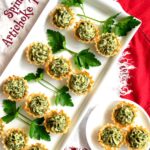 Spinach Artichoke Tartlets are just in time for your New Year’s Eve appetizer table. The spinach and artichoke mixture comes together in minutes in your food processor and can be made ahead of time. Fill store-bought phyllo shells before your party, pop them into the oven for 15 minutes, and you’re ready to go. Did I mention that they are absolutely delicious? 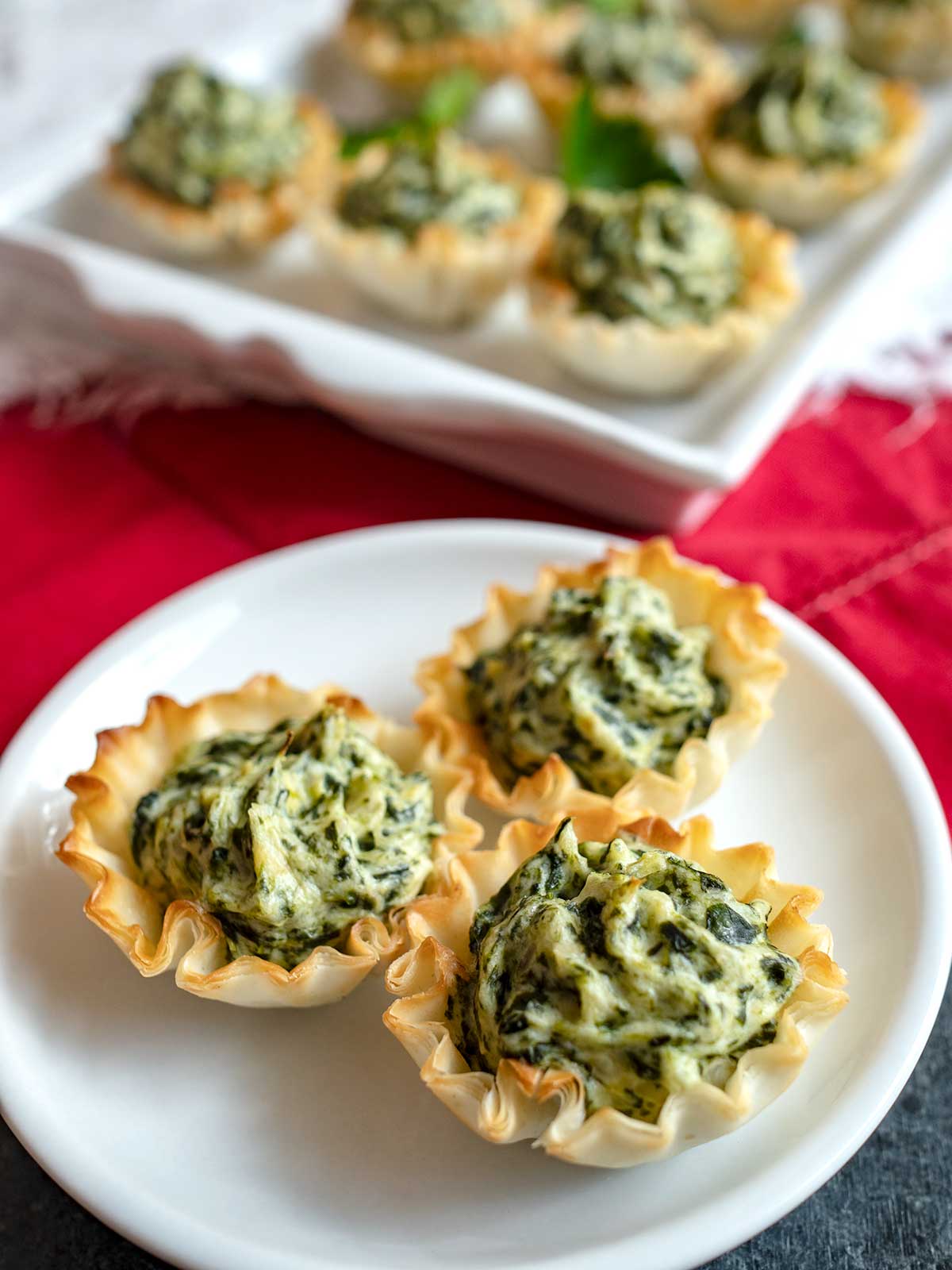 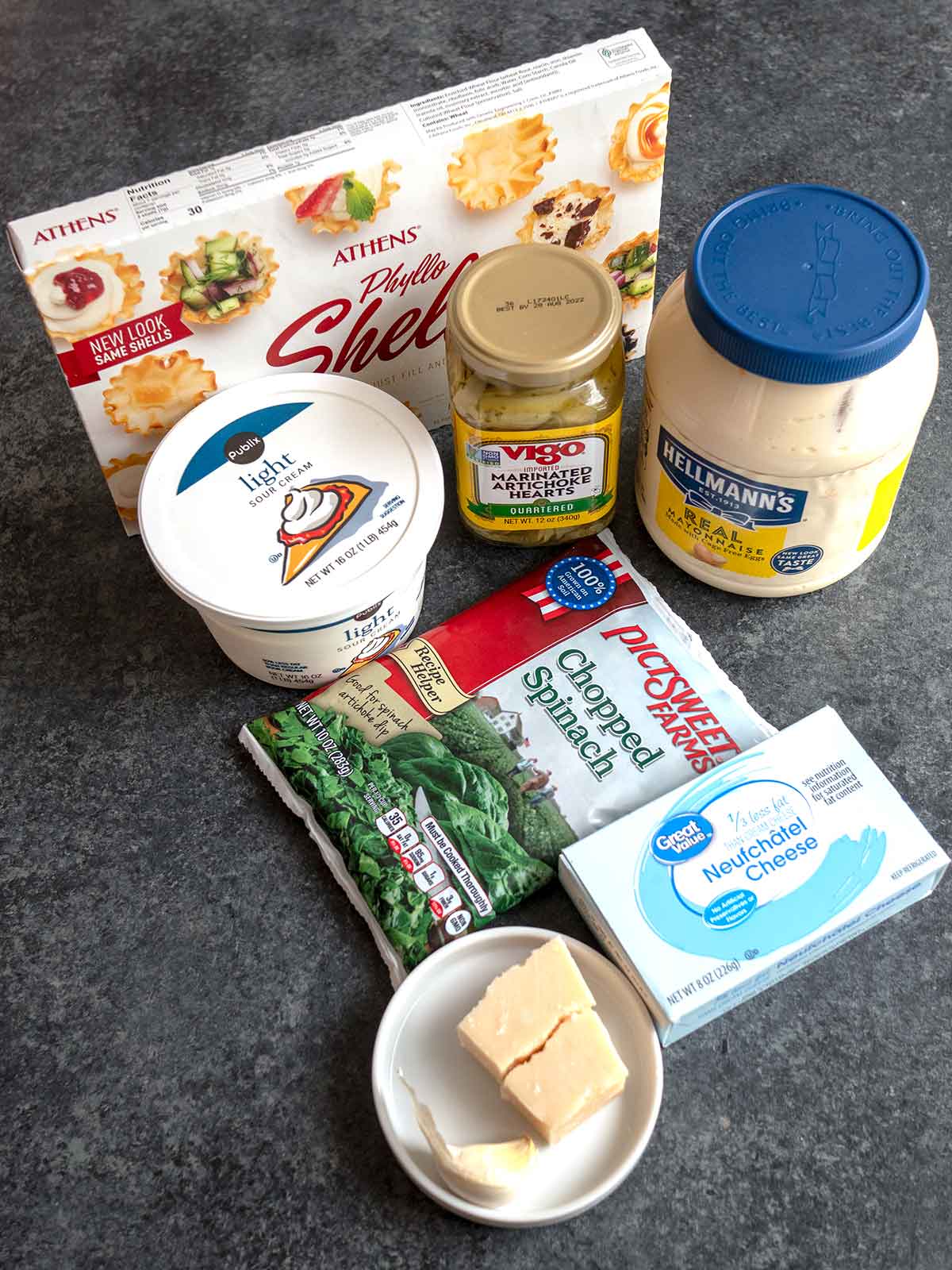 I started by squeezing the liquid out of the spinach. It’s amazing how much liquid actually comes with the spinach! Then, I drained the artichoke hearts and cut them into small pieces. In doing so, I removed the tough outer leaves. I figured that if the knife wouldn’t cut through the outer leaves, the teeth would have a hard time! Anyway, that was the extent of the prep.

Next, I placed the spinach, artichokes, cream cheese, sour cream, mayonnaise, garlic, and Parmesan cheese in the bowl of my food processor fitted with a steel blade. I pulse processed the ingredients 7 or 8 times, until they were well mixed. Because I was going to pipe the spinach artichoke mixture into the Phyllo shells, I made sure that the artichokes were well chopped. Otherwise, they would clog up the piping tip! 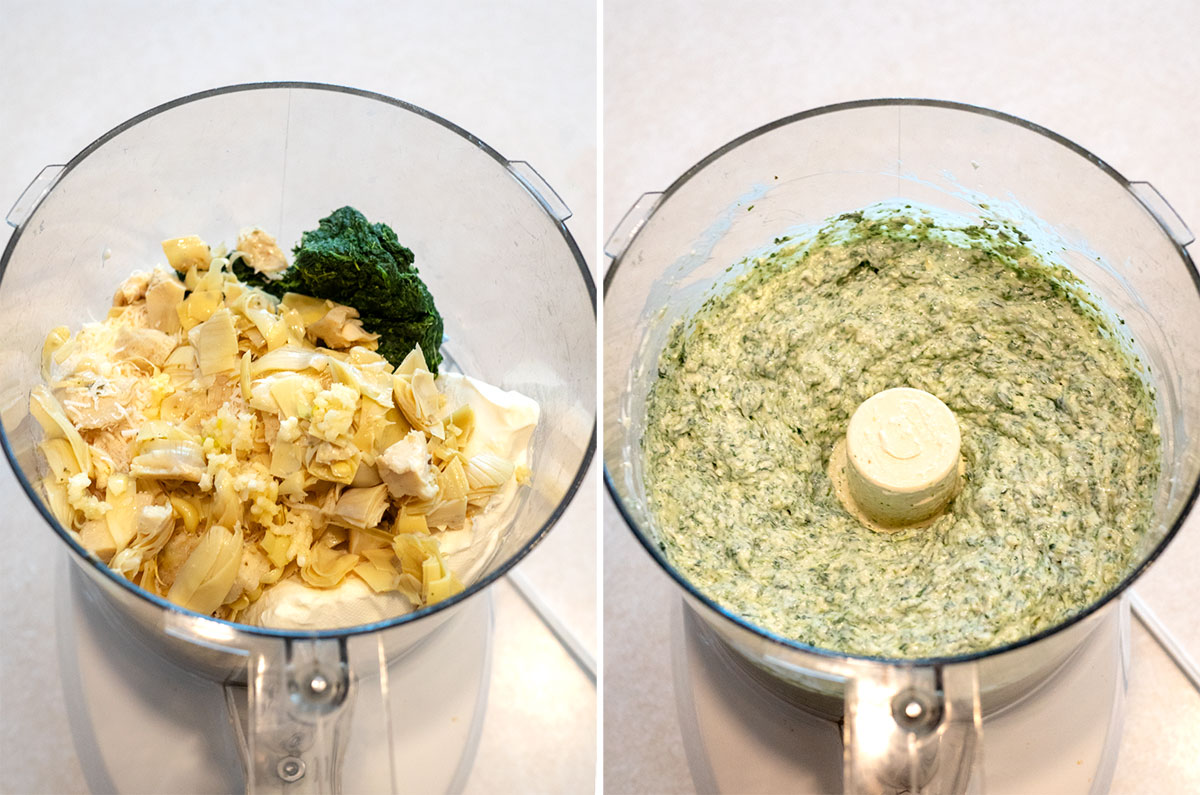 I transferred the spinach artichoke mixture to a piping bag fitted with a large star tip. Specifically, I used the Ateco 825 star tip. I was concerned that if I used the Wilton 1M tip, pieces of the artichoke would clog it up. I piped the spinach artichoke mixture into the Phyllo shells and placed them onto a baking sheet lined with reusable parchment paper. The reason that I lined the baking sheet was to make the cleanup easier. 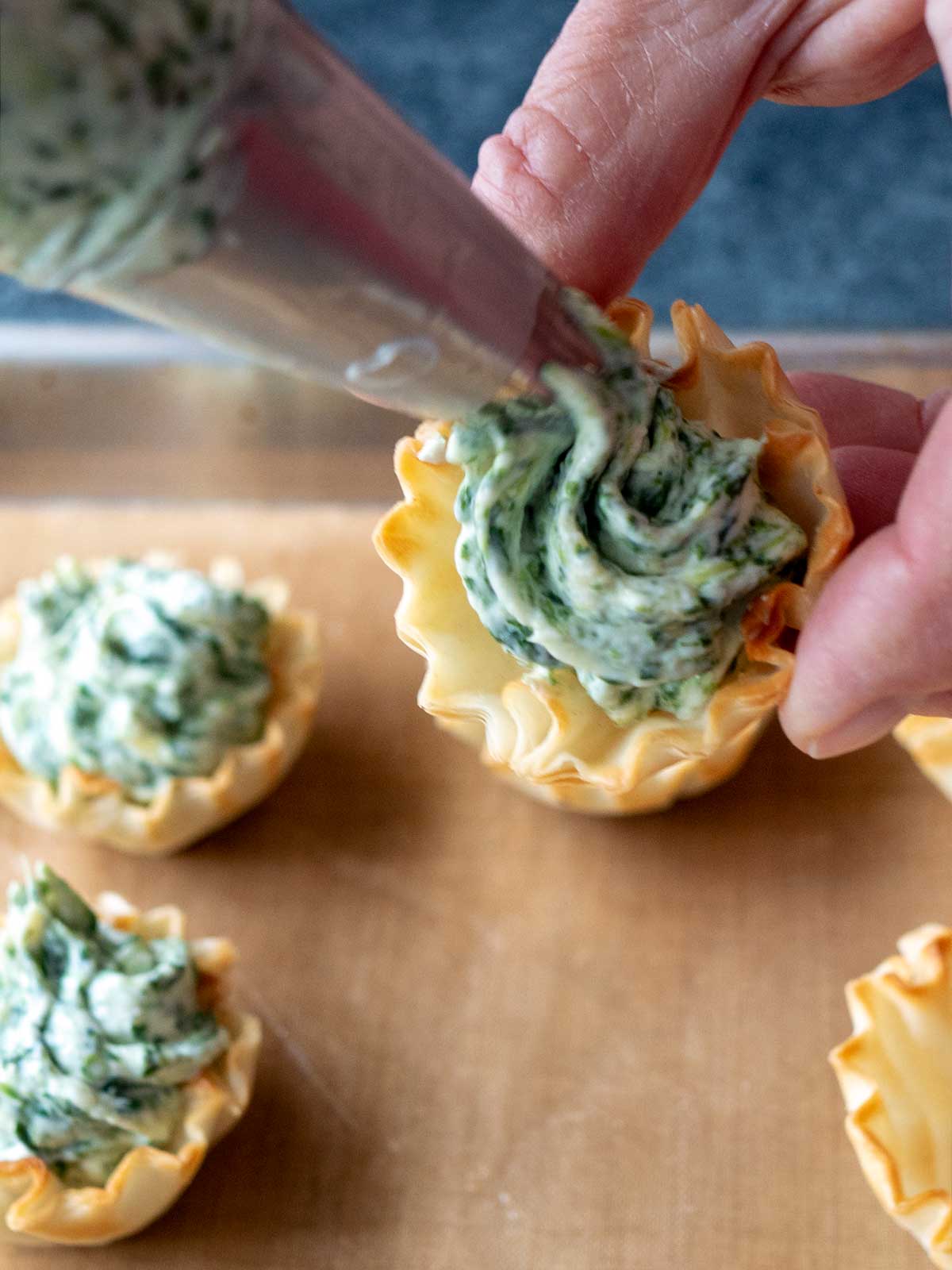 Once I had filled all of the shells, I placed them into a preheated 350° F oven for 15 minutes. After letting the Spinach Artichoke Tartlets cool for about 10 minutes, I served them. They were little bites of heaven! The spinach artichoke mixture was perfectly flavored with the crispy Phyllo shells an added bonus. Yum! 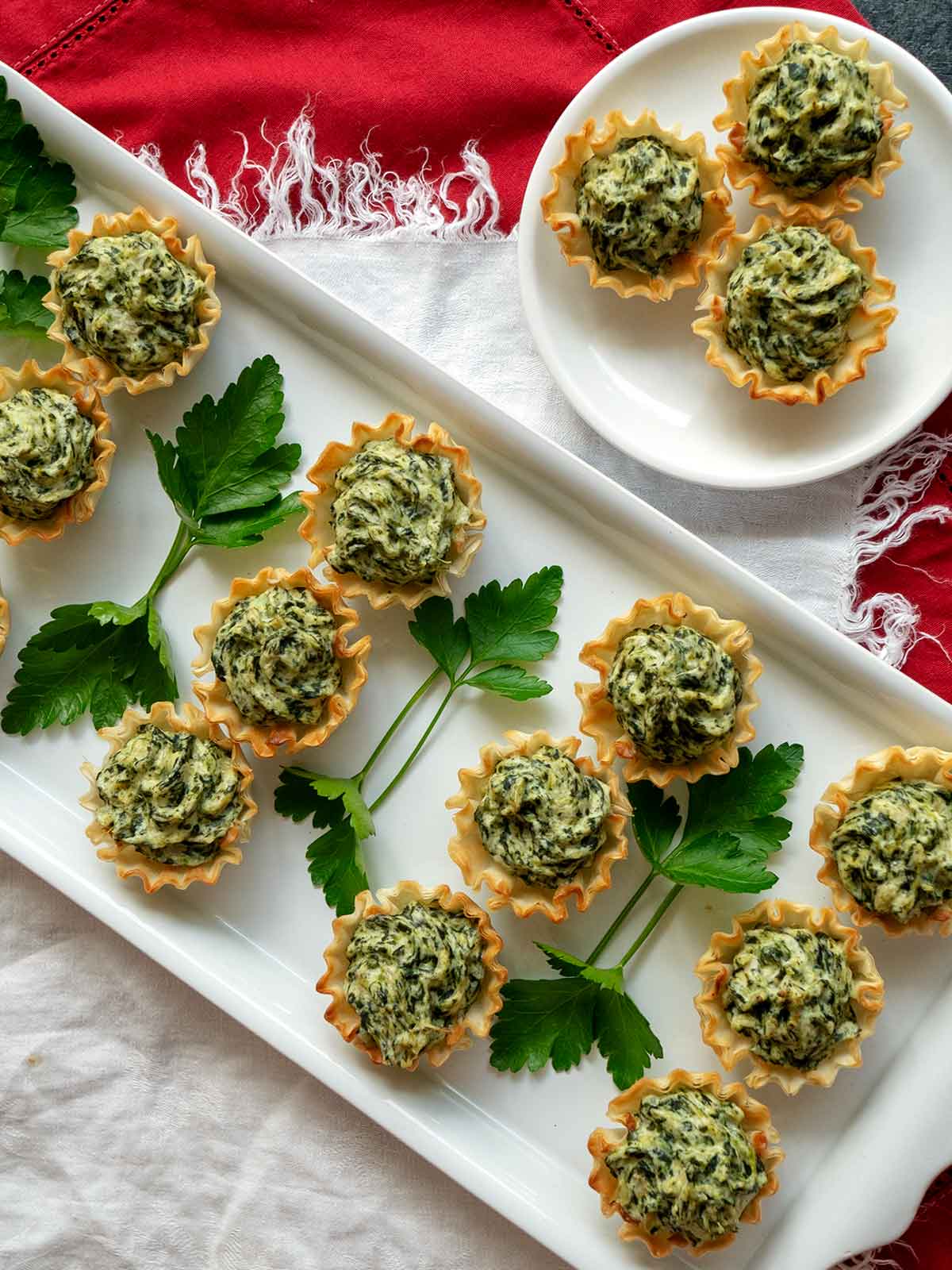 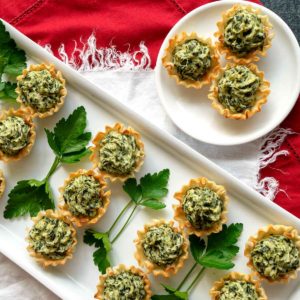