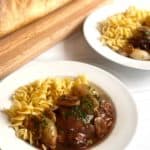 Traditionally, it was a way to cook tough chicken. For my version, I use skinless bone-in chicken thighs for an amazing restaurant quality dish that is elegant enough to serve at a dinner party, but equally worthy of week night dinners. 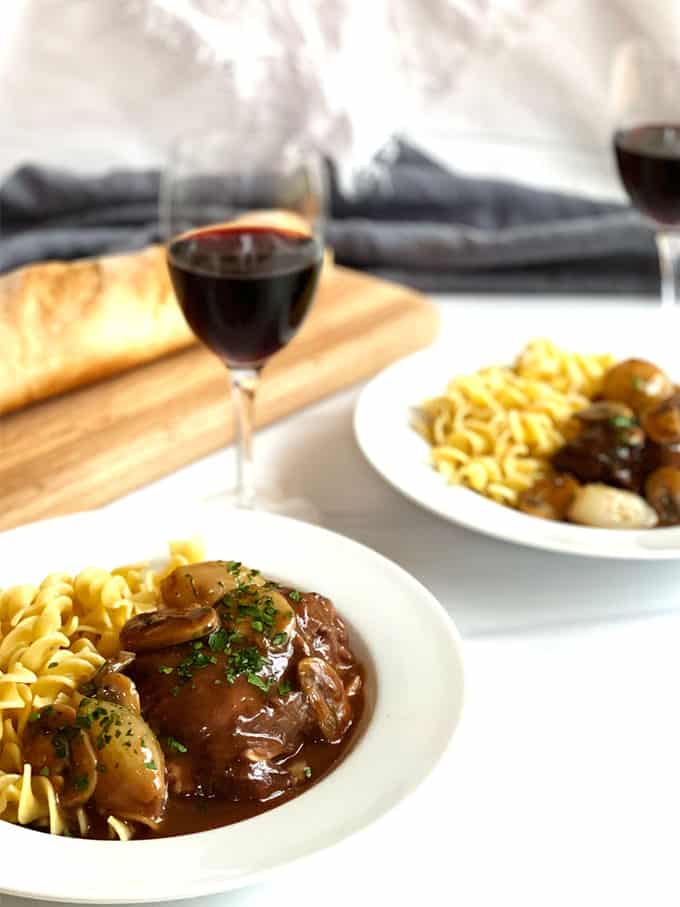 Coq au Vin takes a bit of time to prepare, but is totally worth it. What’s even better is that the leftovers (if any) are even more flavorful the next day.

When I asked Susan what she wanted for her birthday, her response was Coq au Vin and Flourless Chocolate Cake! Excellent choices.

I’ve been making this Coq au Vin for a number of years. It never ceases to produce a WOW factor. Most of the ingredients are probably already in your pantry/refrigerator. 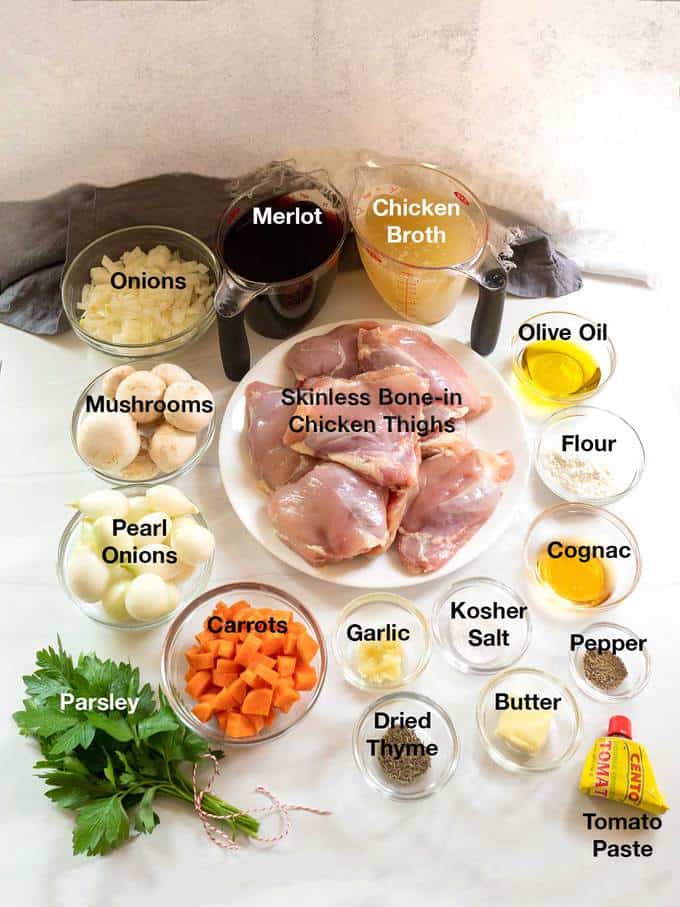 Here’s how I did it. First, I sautéed the chopped onions and carrot in a little olive oil for about 5 minutes in my Dutch oven set over medium heat. 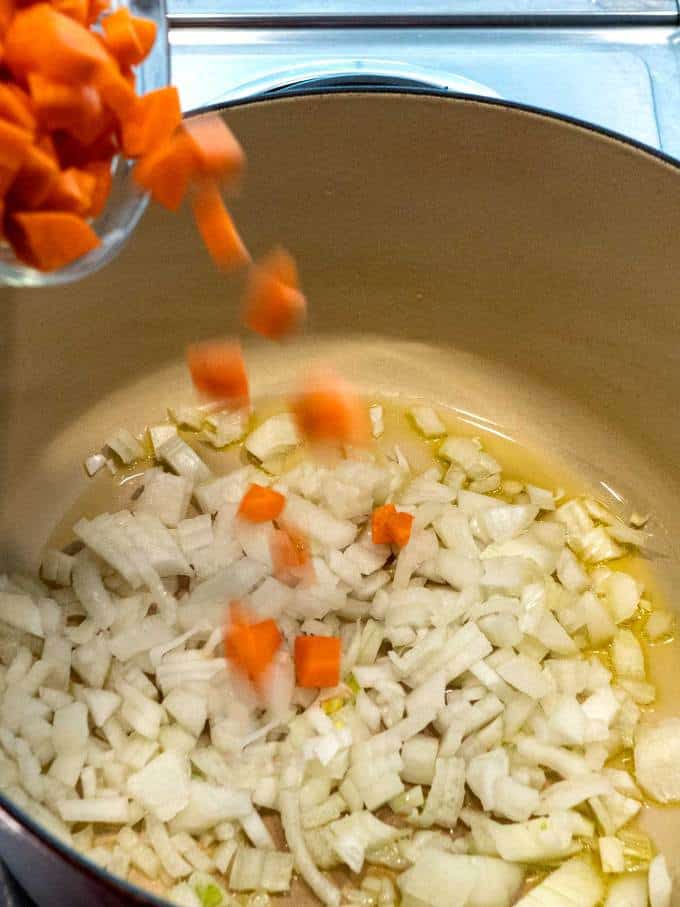 Then, I added the garlic and cooked the vegetables for about 30 seconds until the garlic was fragrant. Next, I added the flour, salt, thyme and pepper, and stirred everything to combine. 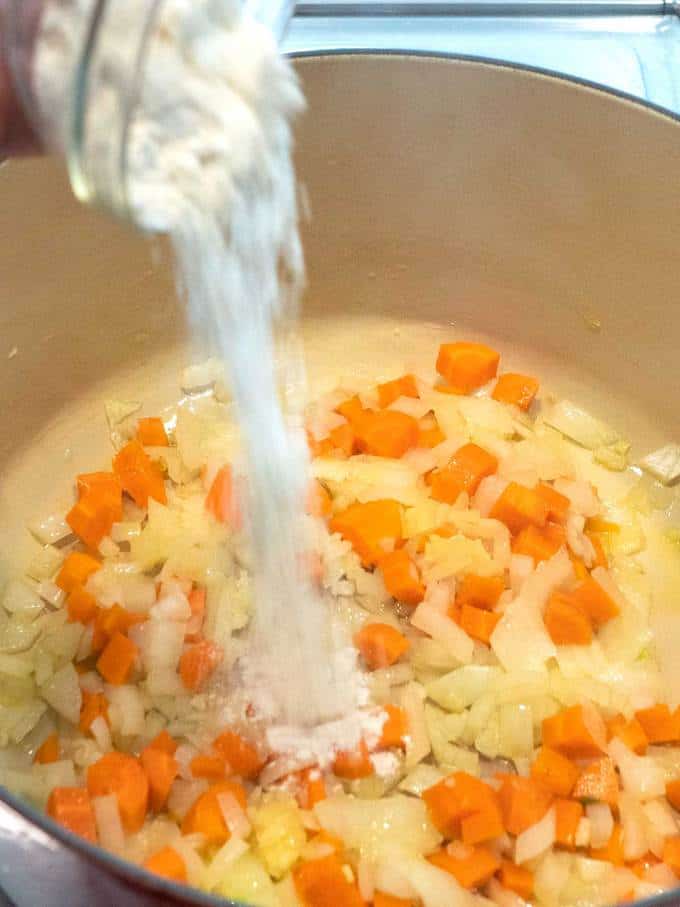 Finally, I added the wine, chicken broth and tomato paste and brought the mixture to a boil, stirring constantly. Once the sauce had thickened a bit, I added the parsley that I had tied into a bundle, covered the Dutch oven, and transferred it to a 325°F oven for 1 hour and 30 minutes. 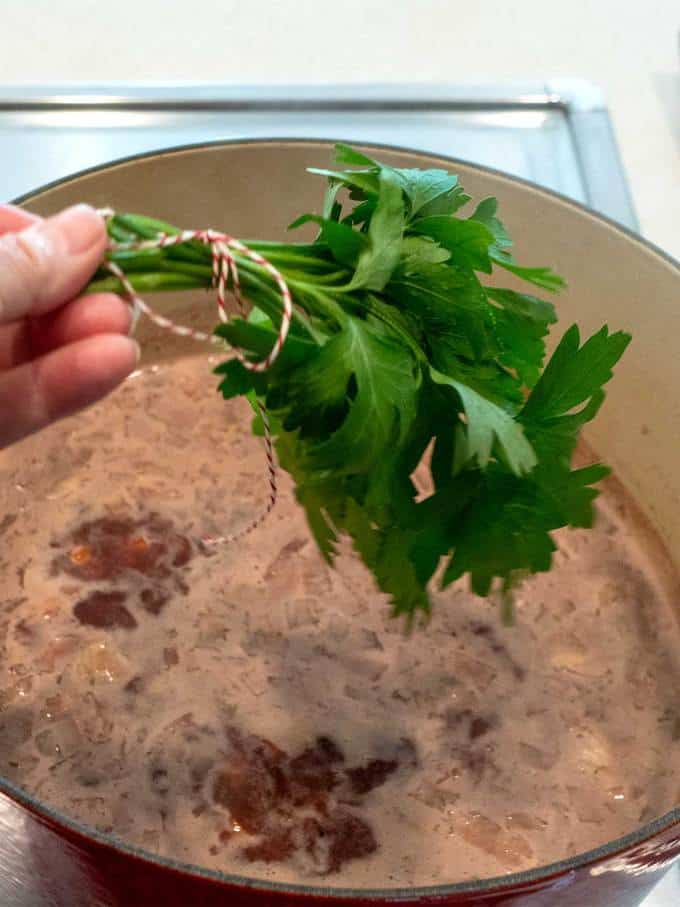 Once all of the chicken thighs had been browned, I set them aside until it was time to add them to the wine sauce. 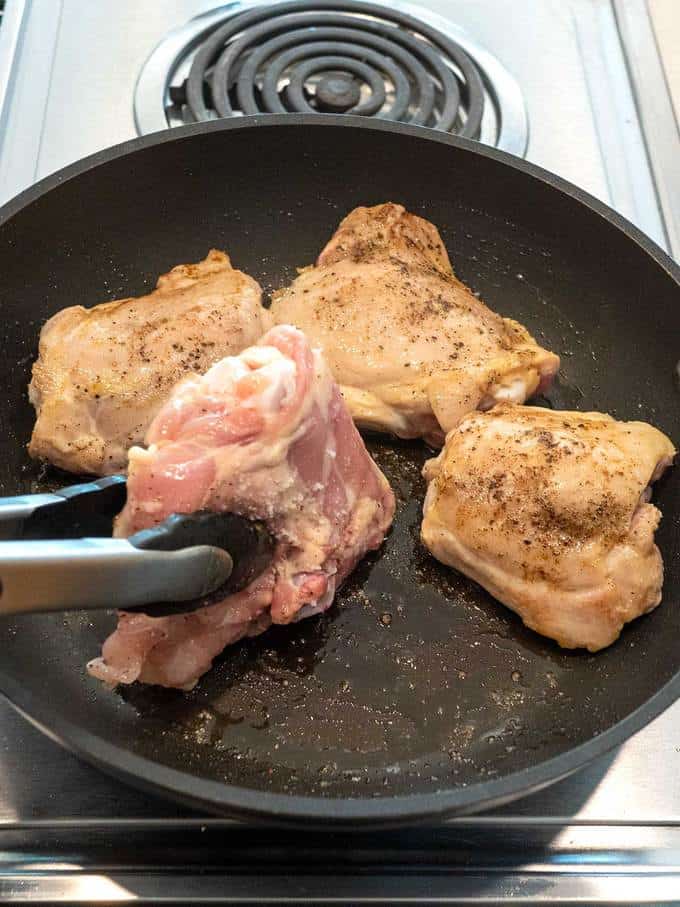 After cooking the wine sauce for an hour and 30 minutes, I removed the Dutch oven from the oven. The onions and carrots had done their part to flavor the sauce. Therefore, I poured the contents into a wire strainer set over a large bowl.

Using the back of a spoon, I pressed on the onion mixture to extract as much sauce as possible, and returned the strained sauce to the Dutch oven. I discarded the vegetables. 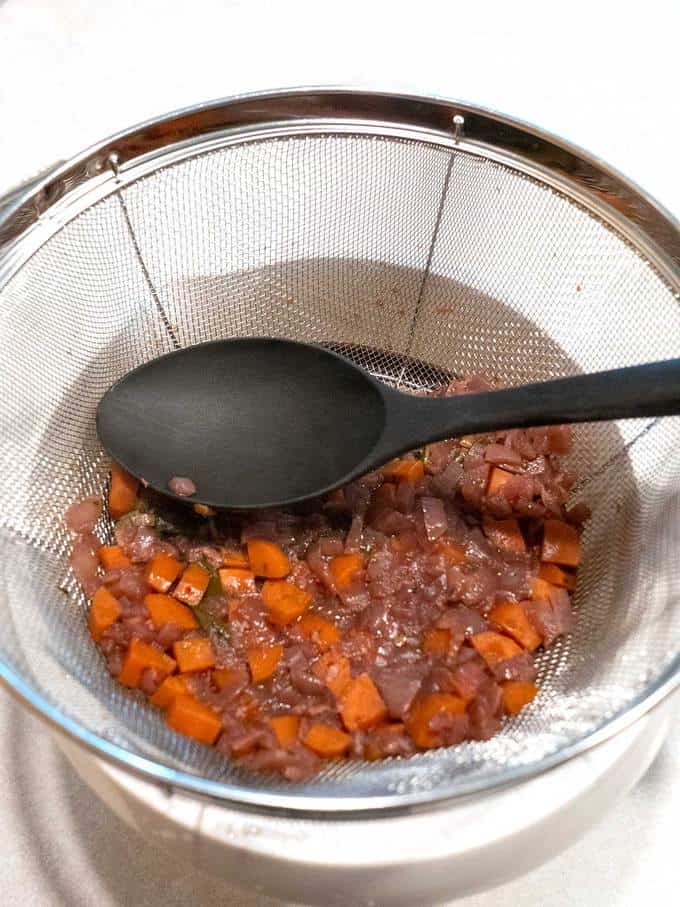 I added the chicken thighs to the wine sauce in the Dutch oven. Then, I covered the Dutch oven and returned it to the 325°F oven for another hour and 30 minutes. 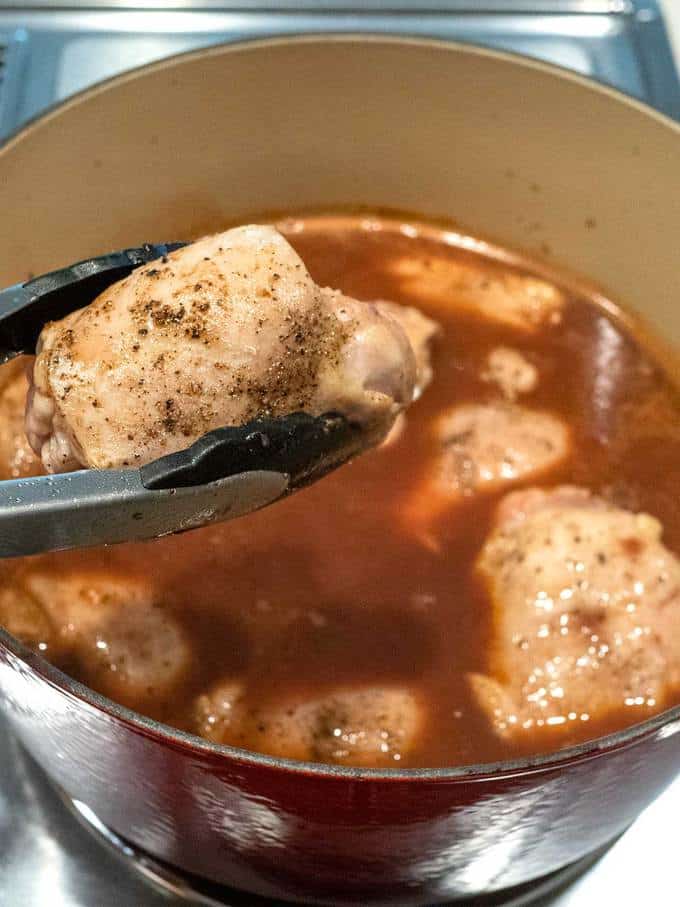 Preparing the Pearl Onions and Mushrooms

The first thing that I did with the pearl onions was place them in boiling water for 30 seconds to loosen the skins. Then, I peeled the onions and patted them dry.

Next, I heated some butter in a 10-inch skillet over medium heat and added the onions. After tossing the onions in the butter, I added some chicken broth, salt and pepper. I brought the mixture to a boil, reduced the heat to medium low and covered the skillet.

I cooked the onions for about 20 minutes, stirring them occasionally, until a fork could easily pierce them. Once the onions were done, I uncovered them, increased the heat to high and cooked them for several more minutes until the chicken broth was evaporated.  I set the cooked onions aside.

For the mushrooms, I heated the skillet with some olive oil over medium-high heat. T

At this point, I set the mushrooms aside. 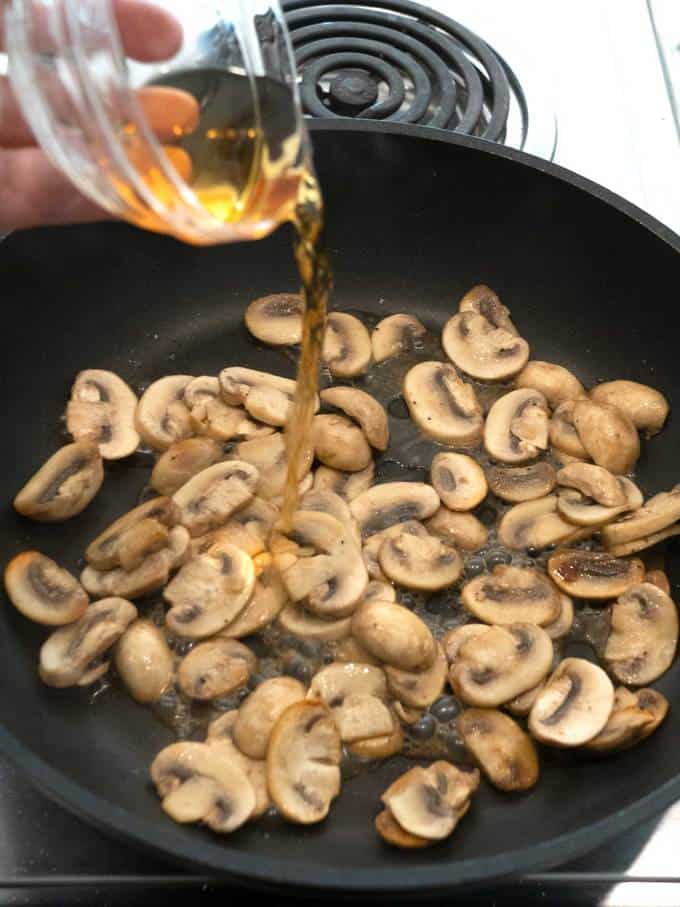 After the chicken had cooked in the wine sauce for an hour and 30 minutes, I removed the Dutch oven from the oven.

I thought that the sauce was a bit thin. Therefore I removed the chicken, and brought the sauce to a boil over medium-high heat. Stirring constantly, I added a slurry of cornstarch mixed with chicken broth to thicken the sauce.

Then, I returned the chicken to the sauce and added the cooked onions and mushrooms. I gave the mixture a stir and heated it for another 5 minutes or so to ensure that everything was nicely heated. 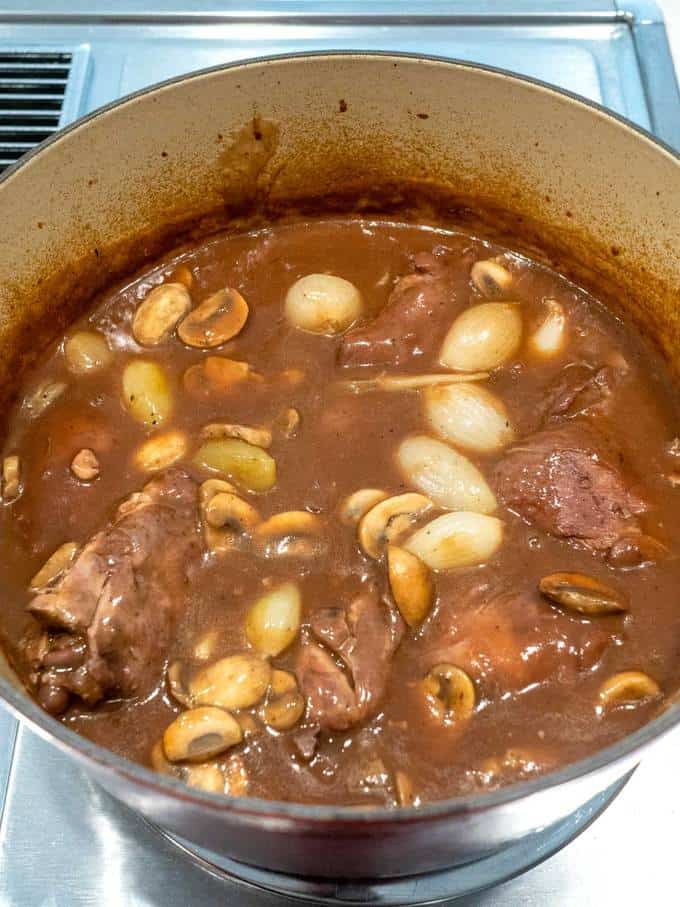 The chicken was falling off the bone tender and succulent, and the sauce incredible. I served the Coq au Vin over buttered noodles with fresh steamed green beans, crusty French bread that I had made earlier in the day and the same Merlot that I used in the wine sauce. Yum! 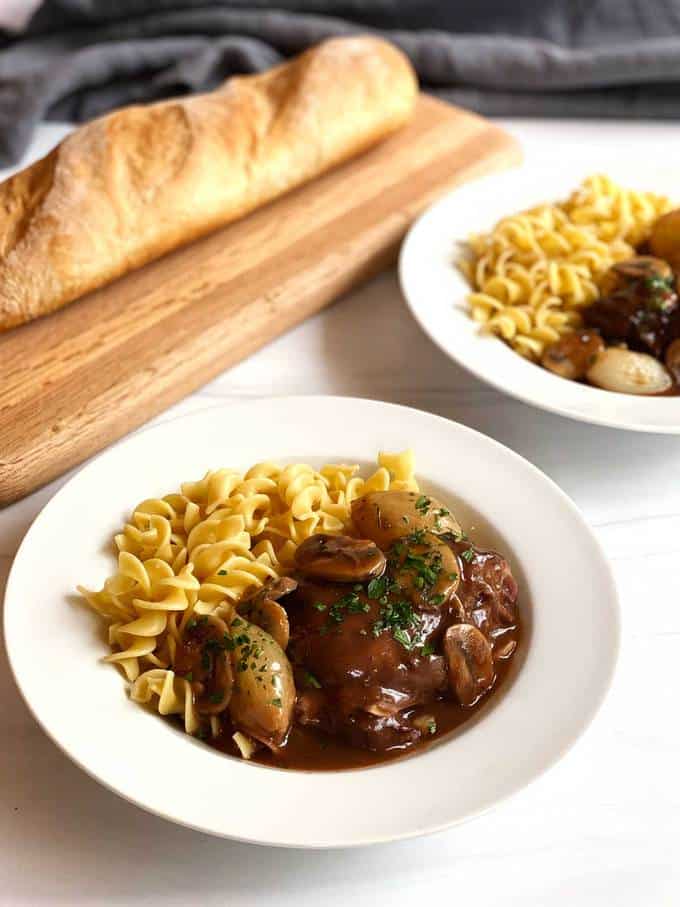 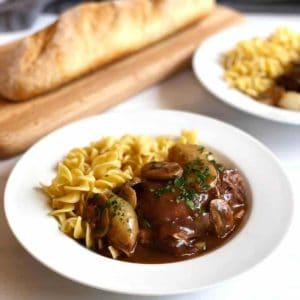