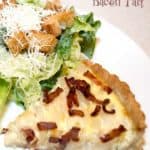 Similar to a quiche, this French Onion and Bacon Tart delivers incredible onion flavor that is accented with crispy bacon. I saw the recipe for this in the Cooks Illustrated All-Time Best French Recipes magazine that Susan gave me for Mother’s Day. 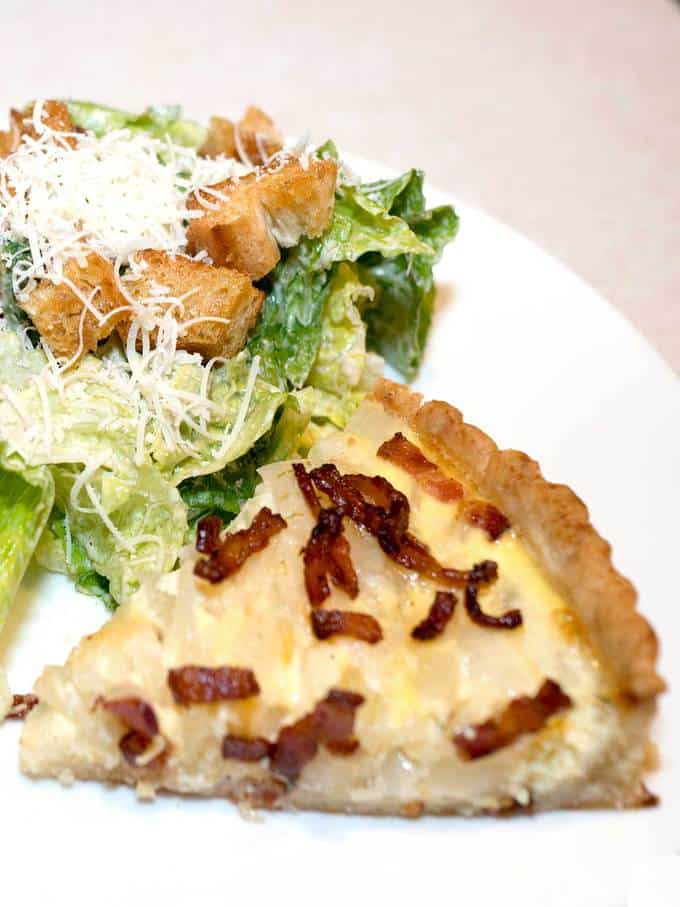 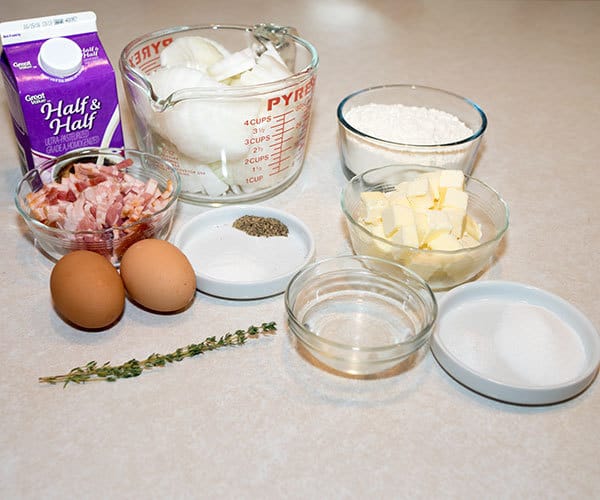 To make the tart dough, I added the flour, sugar, and salt to the food processor, and pulsed it about 4 times to combine everything. Then I scattered chilled butter, that I had cut into small cubes, over the top and pulsed it until the mixture resembled coarse sand,  about 15 times. 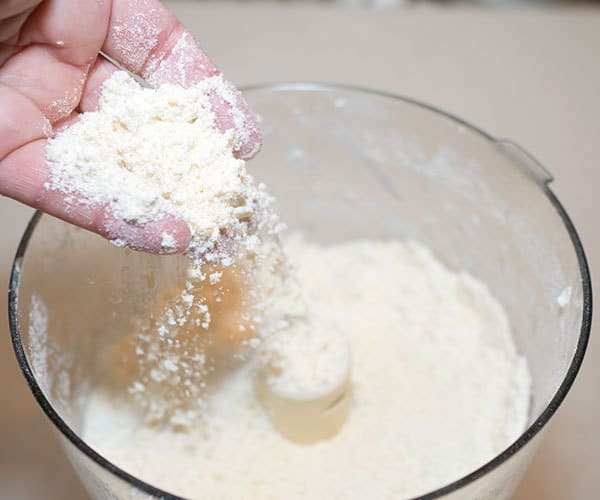 Next I added the ice water and processed the mixture until clumps started to form. This took about 5 seconds. 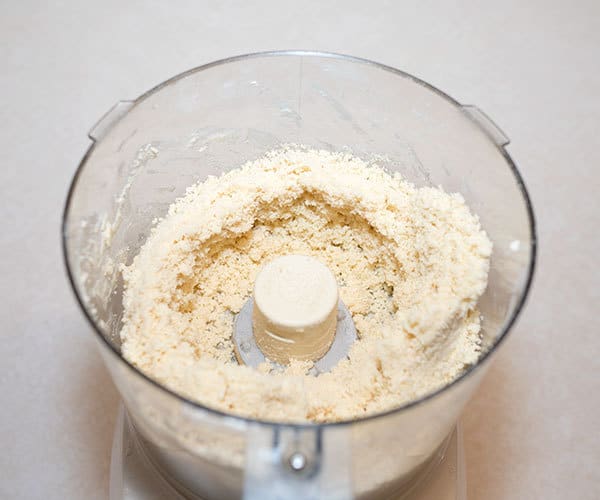 Rather than rolling out the dough, I tore it into small pieces and sprinkled it into the tart pan. I pressed the dough firmly into the corners and up the sides of the tart pan, into the fluted ridges. As a finishing step I laid a piece of plastic wrap over the dough and finished smoothing it out.

Once the tart shell was formed, I put it in the freezer for 30 minutes. Before baking it I sprayed a piece of extra-wide heavy aluminum foil with vegetable oil spray and gently pressed it against the dough, covering the edges to prevent over browning. I filled the tart shell all the way to the top with dried beans to prevent the sides from shrinking down. Then I baked it in a preheated 375° F oven for 30 minutes.

After 30 minutes I carefully removed the foil and beans and continued baking the shell until it was golden brown. This took another 10 minutes. I placed the baked tart shell on a wire cooling rack, however I noticed that several cracks formed as it was cooling. To seal the cracks, I brushed it with egg white. The last thing that I wanted was for the custard to seep out during baking. The seal worked perfectly! 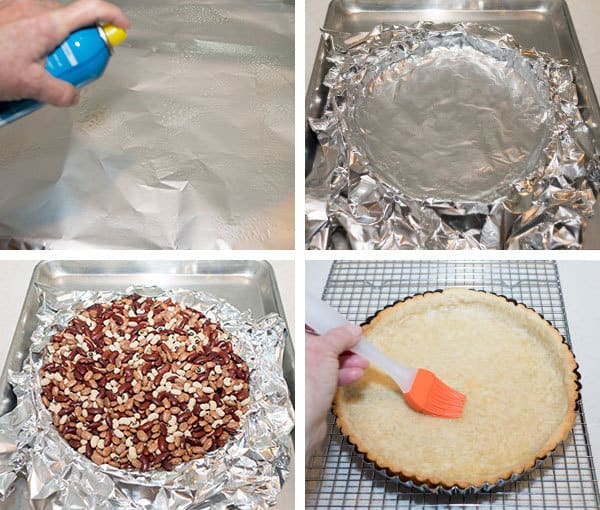 To make the filling, I started by cooking the bacon over medium heat until it was crispy. Because some of the bacon fat was needed for cooking the onions, I drained the bacon in a wire strainer set over a bowl to catch the grease.

I returned 2 Tablespoons of the bacon fat to the skillet and added the onions, salt, and thyme sprig. Next I covered the pan and cooked the onions over medium heat until they started to release liquid and wilt. This took about 10 minutes. Then I reduced the heat to low and continued to cook the onions for another 15 minutes. After 15 minutes there was still a fair amount of liquid in the pan, so I removed the lid and continued cooking until the onions until the liquid had evaporated. This took another 5 minutes or so. I removed the pan from the heat, removed the thyme sprig, and let the onions cool for about 5 minutes. 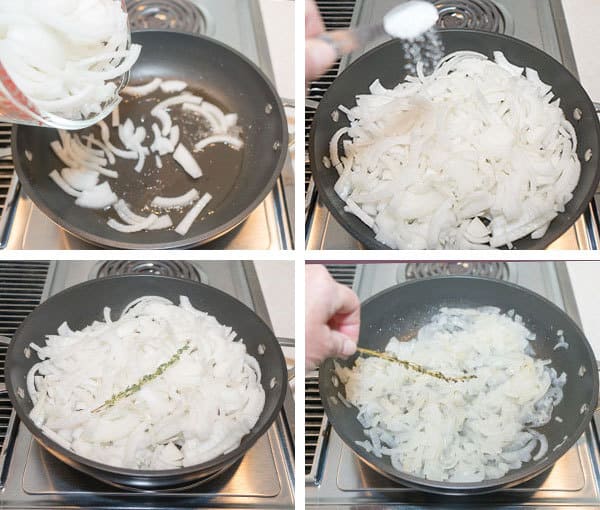 Next I whisked the eggs, half-and-half, and pepper together. I then stirred the onions in just until they were incorporated. I spread the onion mixture over the tart shell and sprinkled the bacon evenly over the top. Just in case it leaked, I placed the tart on a foil lined baking sheet. I baked the tart in a preheated 375° F oven for 25 minutes until the center felt firm to the touch. 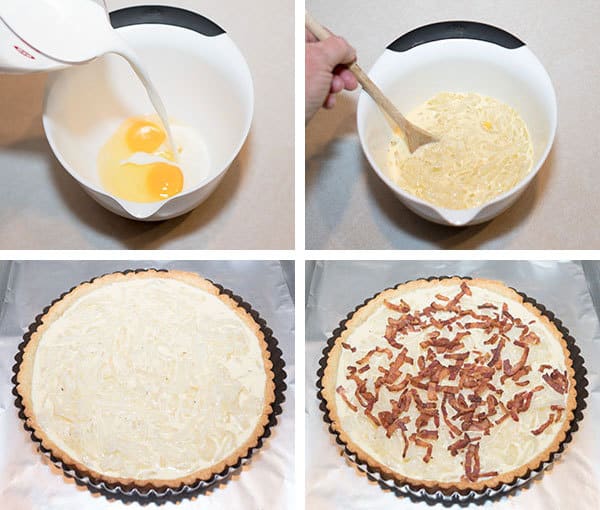 After 25 minutes, the tart was perfectly set. I transferred it to a wire rack and let it cool for about 10 minutes. 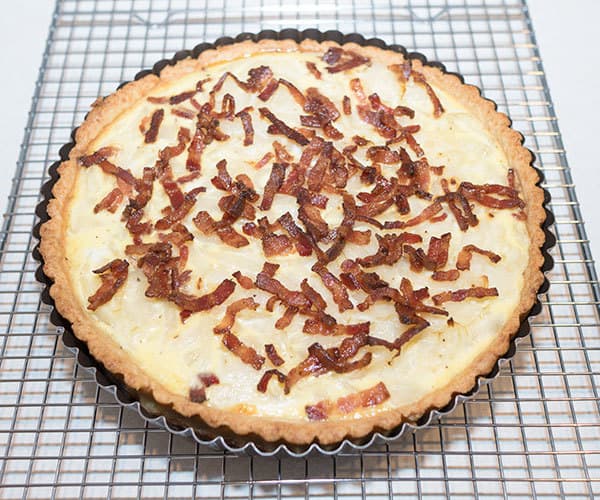 Then I removed the outer metal ring of the tart pan, slid a metal spatula between the tart and the pan bottom, and carefully slid the tart onto a cutting board. I cut the tart into wedges and served it with a Caesar Salad. The crust was buttery, and the filling absolutely delicious. Yum! 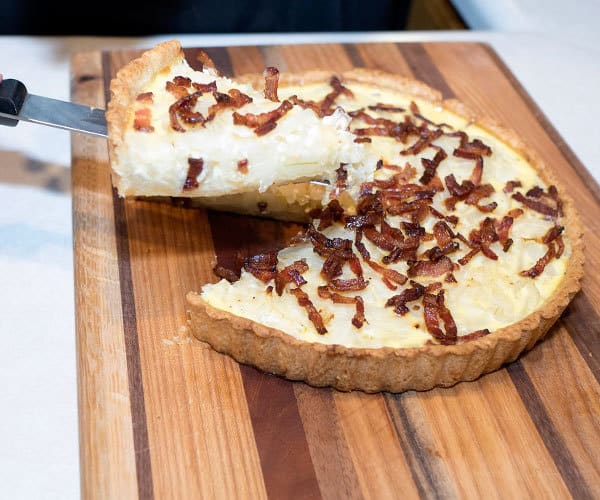 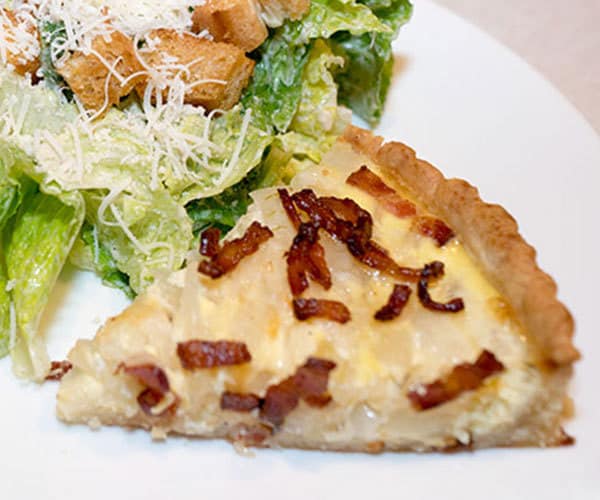 If you’re interested in some more savory Tarts, check out my Three Cheese Zucchini Tart or Fresh Tomato Ricotta Tart in Puff Pastry.

I hope you liked this recipe for French Onion and Bacon Tart as much as I do. If so, please consider rating it and leaving a comment. Also, if you’d like to receive notifications of new posts by email, ever your email address in the Subscribe box. 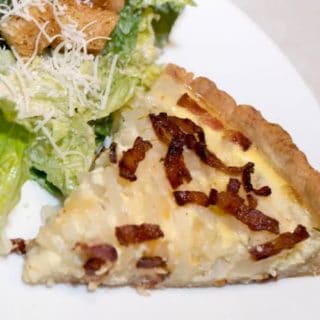