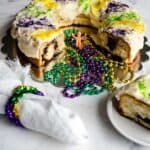 Mardi Gras Cinnamon Roll King Cake is an adaptation of the traditional King Cake. Generally, a dough-filled ring forms the King Cake. This time, I thought it would be fun to cut the filled dough into cinnamon rolls and use them to form the ring.

This time, I thought that it would be fun to cut the filled dough into cinnamon rolls and use them to form the ring.

Guess what? It worked like a charm! Also, I should mention that I used my bread machine to do most of the work!

About the King Cake

The traditional Mardi Gras King Cake is a ring of cinnamon roll dough that is topped with an icing. It is usually finished off with the Mardi Gras colors of green, yellow, and purple.

King Cakes generally have a small figurine called a fève hidden inside. In New Orleans, the fève takes the form of a small plastic baby.

Originally the plastic baby symbolized the baby Jesus. Today, it symbolizes luck and prosperity to whomever finds the baby. That person has the honor of providing next year’s King Cake or throwing the next Mardi Gras party.

What You’ll Need For Cinnamon Rolls

The cinnamon rolls have two basic parts – the dough and the filling.

For the filling, I used unsalted butter, light brown sugar, and ground cinnamon.

Here’s How I Made the Cinnamon Rolls

I wrapped half of the dough in plastic wrap and refrigerated it for a later use. I rolled the other half into a 10 x 15-inch rectangle.

I arranged the cinnamon rolls around the edges of a 10-inch cake pan that I had sprayed with non-stick spray and lined with parchment paper.

Then, I placed a round 4-inch metal pastry cutter in the center of the pan. The reason for doing this was to ensure that the cinnamon rolls had the proper shape when they had risen.

This is a trick that I learned from Julia Child. It produces the perfect environment for the dough to rise.

After an hour, the cinnamon rolls had doubled in size.

Here’s How I Made the Icing

You can’t have a King Cake without delicious icing decorated in Mardi Gras colors.

While the cinnamon rolls were baking, I made the icing using cream cheese, unsalted butter, vanilla extract, and confectioners’ sugar. I also set aside green, yellow, and purple sprinkles to use in finishing the King Cake.

First, I beat the cream cheese and butter together until it was smooth. Then, I added the confectioners’ sugar and vanilla and beat everything together until the icing was smooth and creamy.

After I removed the cinnamon rolls from the oven, I let them cool for about 5 minutes. Then, I inverted them onto a wire rack and removed the parchment paper from the bottom. I also removed the metal pastry cutter.

Next, I inverted them again onto another wire rack and inserted the plastic baby into one of the gaps.

I set the wire rack inside of a rimmed baking sheet that I had lined with aluminum foil. While the cinnamon rolls were still warm, I spooned on the icing.

I finished the Mardi Gras Cinnamon Roll King Cake with a sprinkling of green, yellow, and purple sprinkles.

The Mardi Gras Cinnamon Roll King Cake was amazing. It was like a giant cinnamon roll with cream cheese icing, and lots of it. Laizzez les Bon Temps Rouler! Yum!

What was done with the other half of the dough?

Could a cream cheese filling be used for the cinnamon rolls?

Sometimes when I make the king cake, I will use a cream cheese filling. For this I beat together cream cheese and confectioners’ sugar and spread it on the dough. Then, I combine some sugar, cinnamon and melted butter and spread that on top of the cream cheese.

Why is it called a King Cake?

The name king cake is derived from the Biblical story of the three kings bringing gifts to the Baby Jesus.

If you’re a fan of King Cake, you should try one of these other amazing recipes:

I first posted the Mardi Gras Cinnamon Roll King Cake on February 2, 2019. Since we’re now in the middle of the Carnival season, I thought that it was time to update the post.

This update contains enhanced photographs and text. However, the recipe is unchanged. 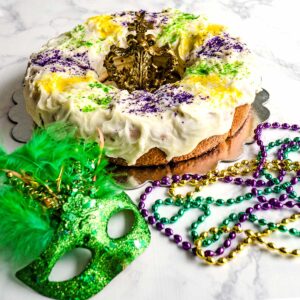