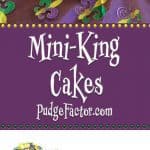 Mini King Cakes are a miniature version of the ever popular New Orleans King Cakes. The most traditional style is a ring of twisted cinnamon roll dough topped with icing, decorated with purple, green, and gold sugar or sprinkles. As an added treat the King Cake may be filled with cream cheese. Whatever the filling, the King Cake is a traditional staple of the Mardi Gras Season. 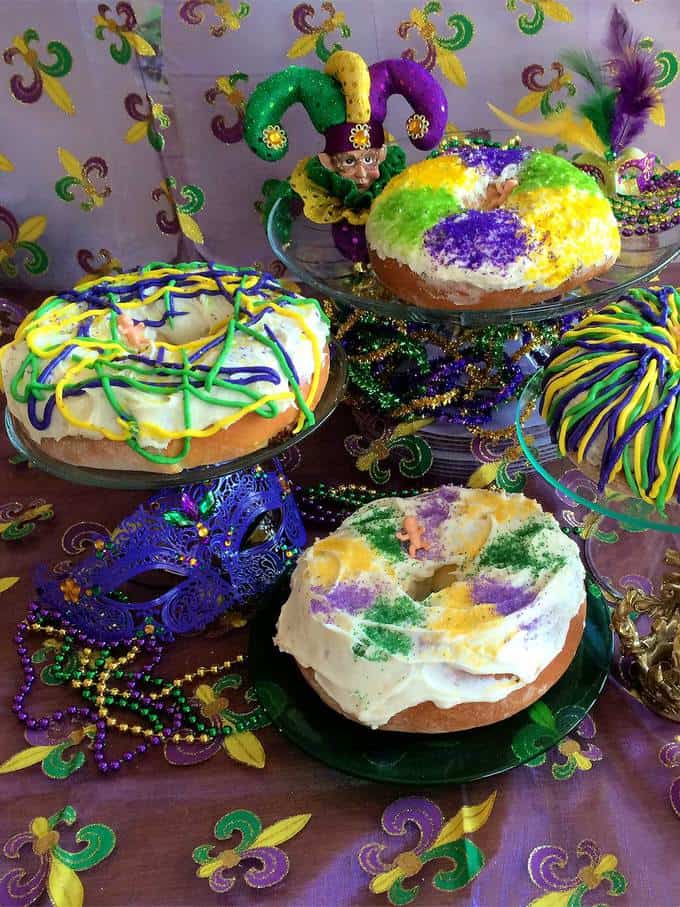 When Susan and I were in New Orleans, we sampled two variations of King Cake.  One was at our cooking class and the other was at Sucré. Sucré is a New Orleans confectioner whose King Cakes have previously been voted the “Best.” Well, no offense, but we found both of these to be marginal at best.  We knew that ours was truly the “Best!”

In the past we’ve made full sized King Cakes. This time we thought that it would be fun to make Mini-King Cakes and play with different decorations.

I used the following ingredients for the dough: Water, salt, butter, egg, sour cream, sugar, all purpose flour and yeast. 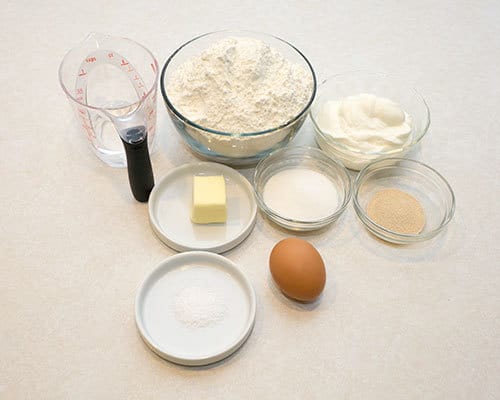 As in the past I used my little bread machine to make the dough. I added the ingredients to the pan of the bread machine in the order listed and started it on the dough cycle. This time, however, I made the dough the night before. As soon as the kneading was finished, I removed the dough from the bread machine and placed it in a large oiled mixing cup. Then I covered the cup with plastic wrap, and put it in the refrigerator. I’ve found that refrigerated dough is generally easier to work with than room temperature dough.

By the next morning, the dough had risen nicely. I removed it from the refrigerator and placed it on a lightly floured piece of wax paper. I ended up with 32 ounces of dough.  Because I was making Mini-King Cakes, cut the dough into 4 equal pieces that were 8 ounces each. I knew that I needed to roll the dough into a rectangle. Therefore, to make the job easier, I formed each piece into a log about 12-inches long. 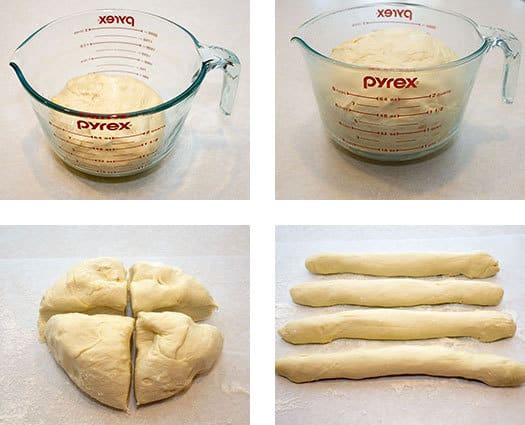 Before actually rolling the dough into rectangles I made the two fillings:  Cream cheese mixed with confectioners’ sugar; and melted butter mixed with granulated sugar and ground cinnamon. 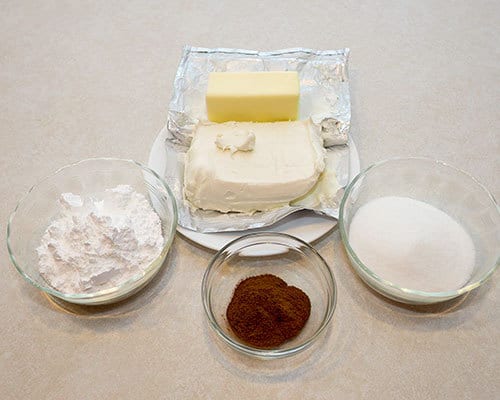 I rolled each dough log into a rectangle roughly 15-inches long and 6-inches wide.  Using an offset spatula, I spread some of the cream cheese mixture on the rectangle. I made sure to leave about 1-inch free on one of the long edges (this is the edge that I will seal).  Then I spread the cinnamon/sugar mixture on top of the cream cheese. Again, I left about 1-inch free on one of the long sides.  Starting with the opposite long side, I carefully rolled the dough in jelly roll fashion, and sealed it by pinching the dough together. 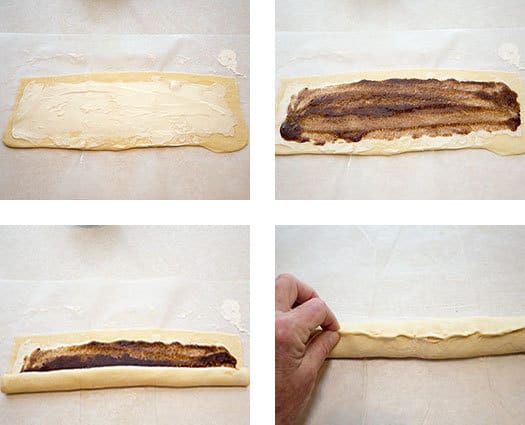 I formed each log into a circle, that was roughly 5-inches in diameter on reusable parchment. I then carefully placed one end into the other end, again pinching to seal. 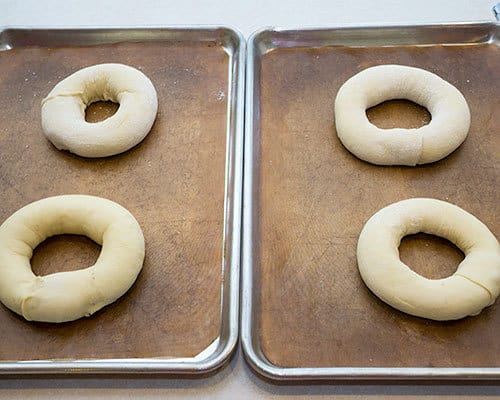 I covered the pans and let the dough rise for about 1 hour and 30 minutes. 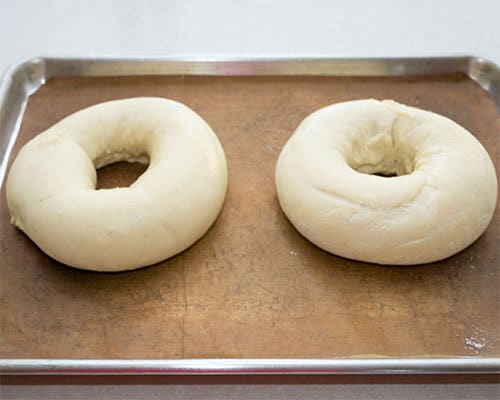 Into a preheated 350° F oven the Mini-King Cakes went for about 20 minutes, until they were golden brown.  While they were cooking, I made the cream cheese icing by beating together cream cheese, unsalted butter, vanilla extract and confectioners’ sugar. 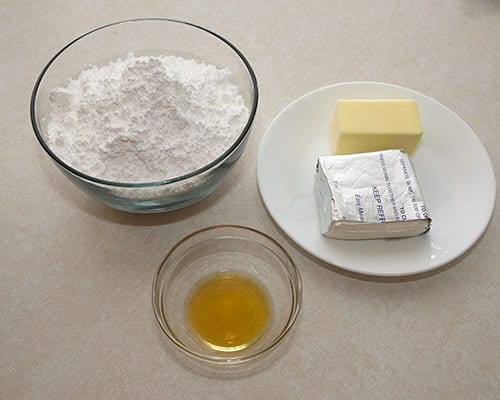 Rather than cook the plastic baby in the cake, Susan positioned one on each of the Mini-King Cakes.  Laissez les bons temps rouler!  Yum! 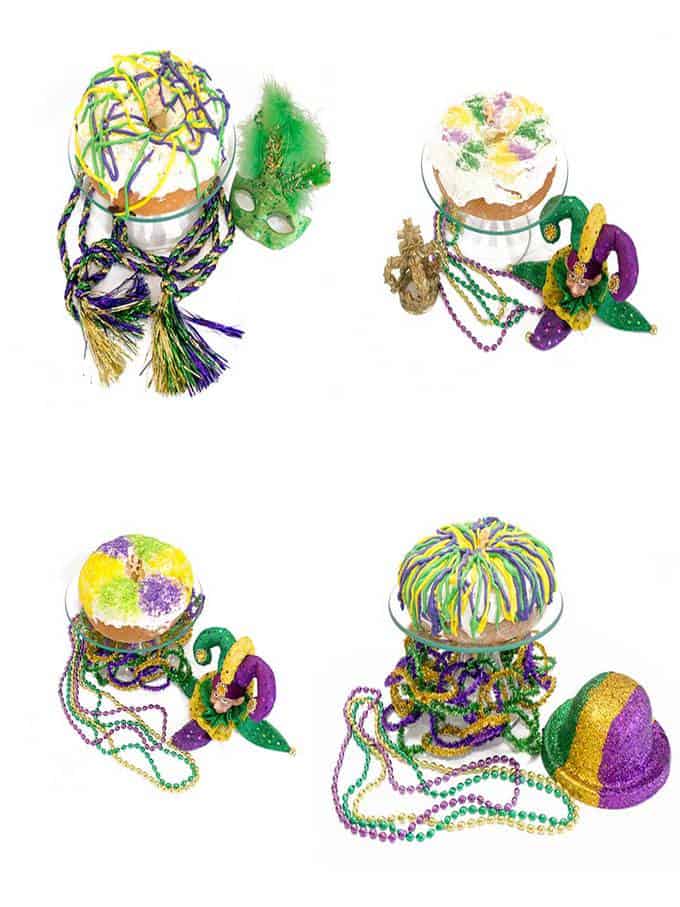 I hope you liked this recipe for Mini King Cakes as much as I do. If so, please consider rating it and leaving a comment. Also, if you’d like to receive notifications of new posts by email, enter your email address in the Subscribe box. 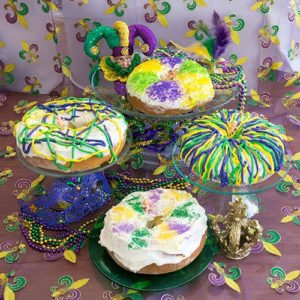