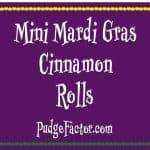 Mardi Gras Cinnamon Rolls in a mini version have all the flavor of a traditional King Cake in a deletable small package! Laissez les Bon Temps Rouler! 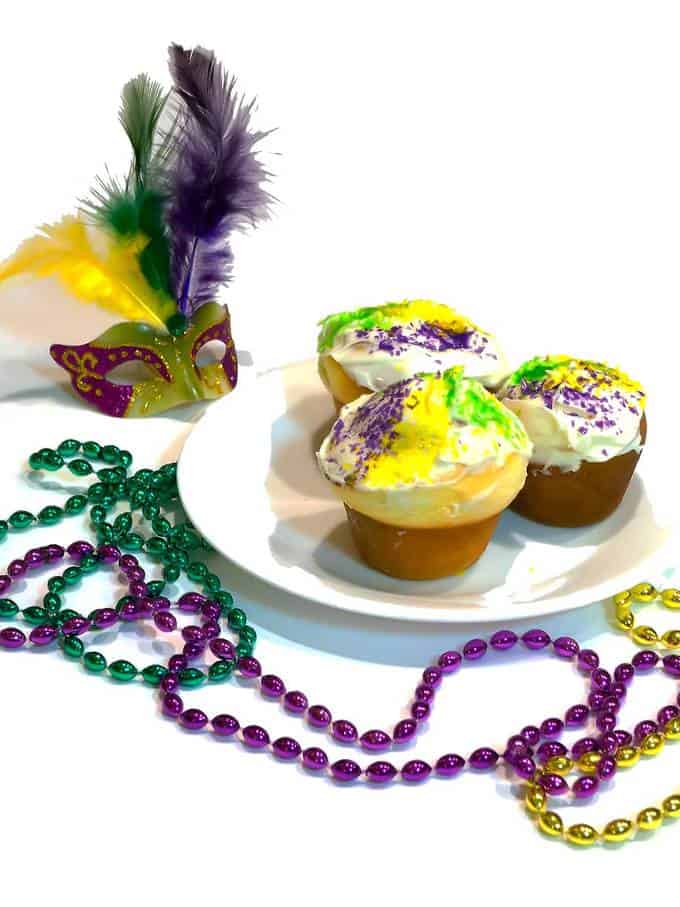 The inspiration for these Mini Mardi Gras Cinnamon Rolls, updated from February 7, 2016, actually started out as King Cake Bites. However, the King Cake Bites were horrible. Therefore, I turned to my tried and true cinnamon bun recipe. If you think about it, a King Cake is really nothing more than a giant cinnamon roll. 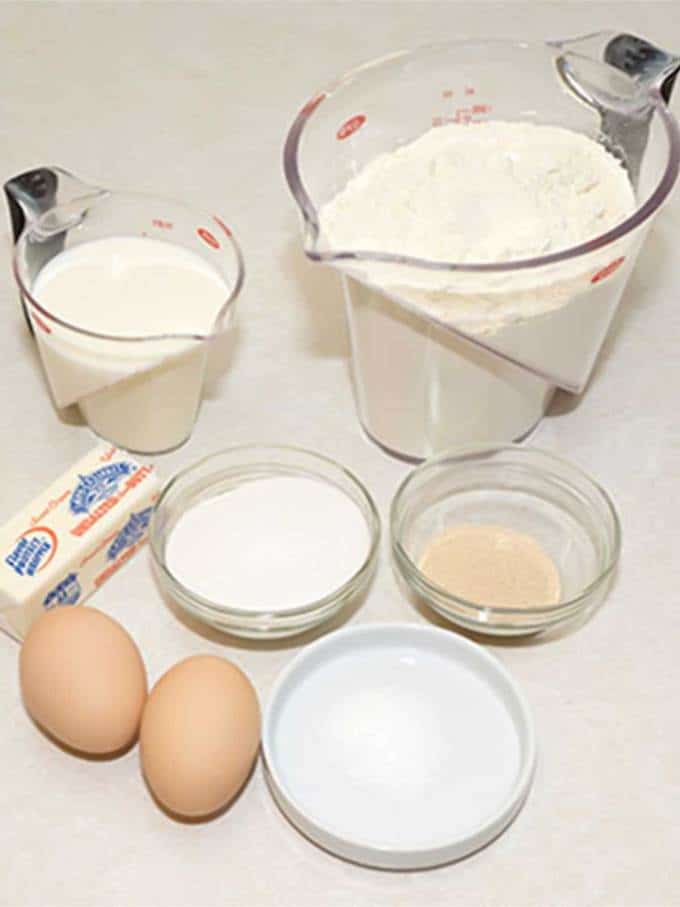 I added the ingredients in the order listed to the pan of my bread machine and started it on the dough cycle. As soon as the kneading had ended I removed the dough from the bread machine. I then placed it into an oiled 8-cup measuring cup, covered it with plastic wrap. Then, I put it in the refrigerator to stay over night. From previous experience, I knew that cold dough was much easier to work with than room temperature dough. 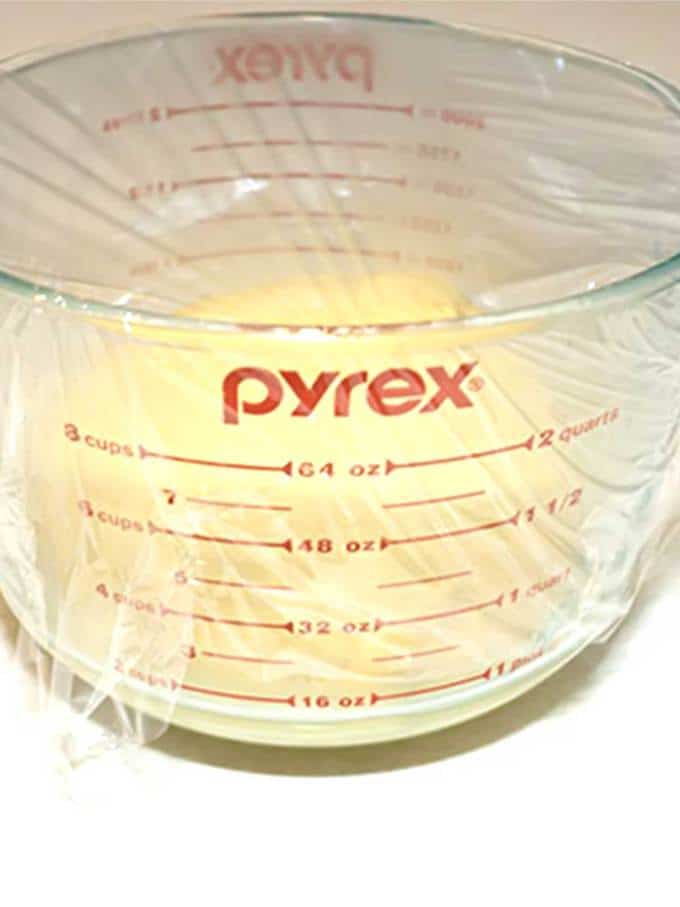 The next morning, I prepared the two fillings for the Mardi Gras Cinnamon Rolls. The first was a mixture of cream cheese and confectioners’ sugar. The second was a mixture of brown sugar, ground cinnamon and melted butter. 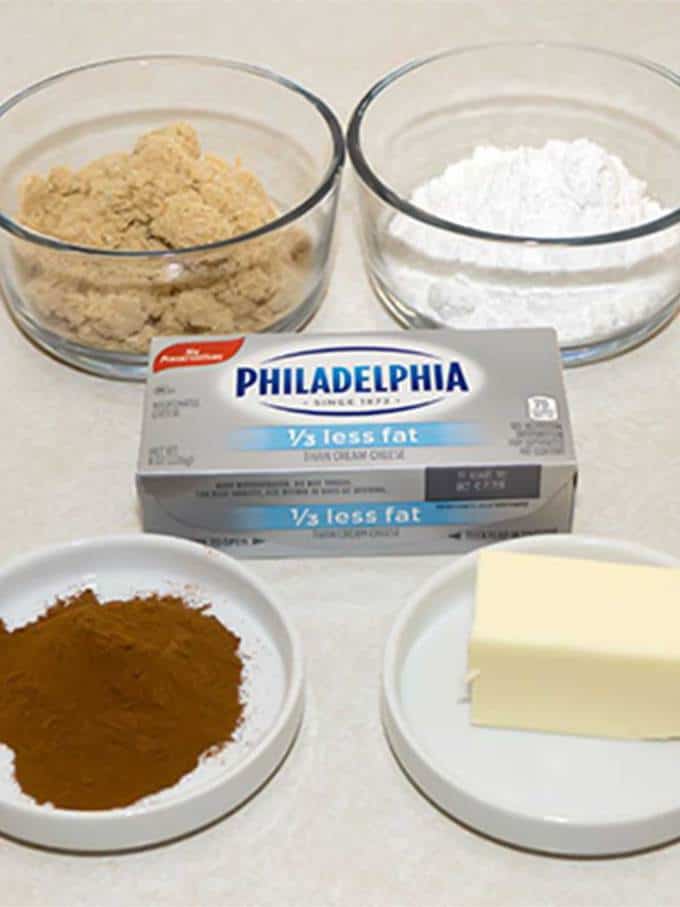 With the fillings made, I removed the dough from the refrigerator. I punched it down, and dumped it onto a floured piece of wax paper. I pretty consistently use wax paper when working with yeasted dough because it minimizes the mess and is easily disposed of. Anyway, I cut the dough into 4 pieces that were roughly 10 ounces each.

Working with one piece at a time, I rolled the dough into a rectangle that was roughly 12-inches by 7-inches. Using an offset spatula, I spread some of the cream cheese mixture on the rectangle. I made sure to leave about 1-inch free on one of the long edges (this is the edge that I will seal).

Then, I spread the cinnamon/sugar mixture on top of the cream cheese. Again, I left about 1-inch free on one of the long sides.  Starting with the opposite long side, I carefully rolled the dough in jelly roll fashion. Then, I sealed it by pinching the dough together. Finally, I cut the log into 12-inch pieces for the Mardi Gras Cinnamon Rolls. 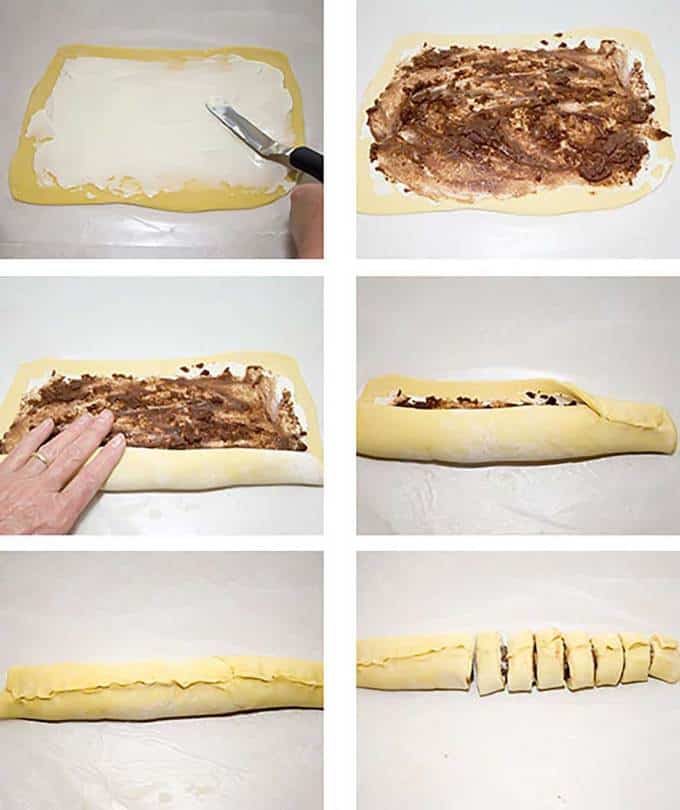 I placed each of the pieces, cut side up, into a mini-muffin pan that I had sprayed with non-stick baking spray. 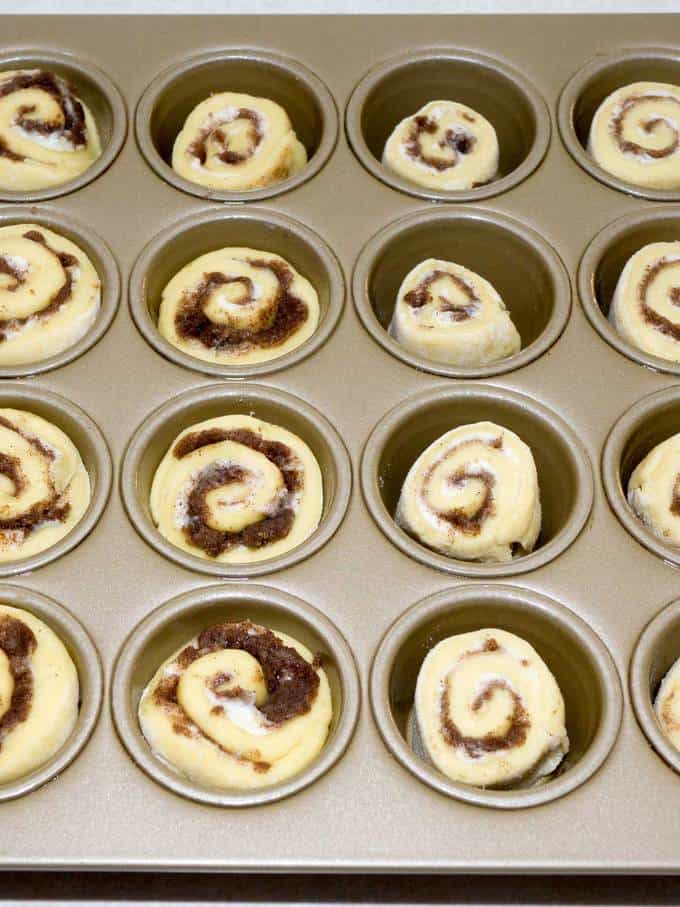 I covered the pan, and let the dough rise for about an hour. Then I placed the pan into a 375° F pre-heated oven for about 12 minutes, until the mini cinnamon rolls were golden brown. 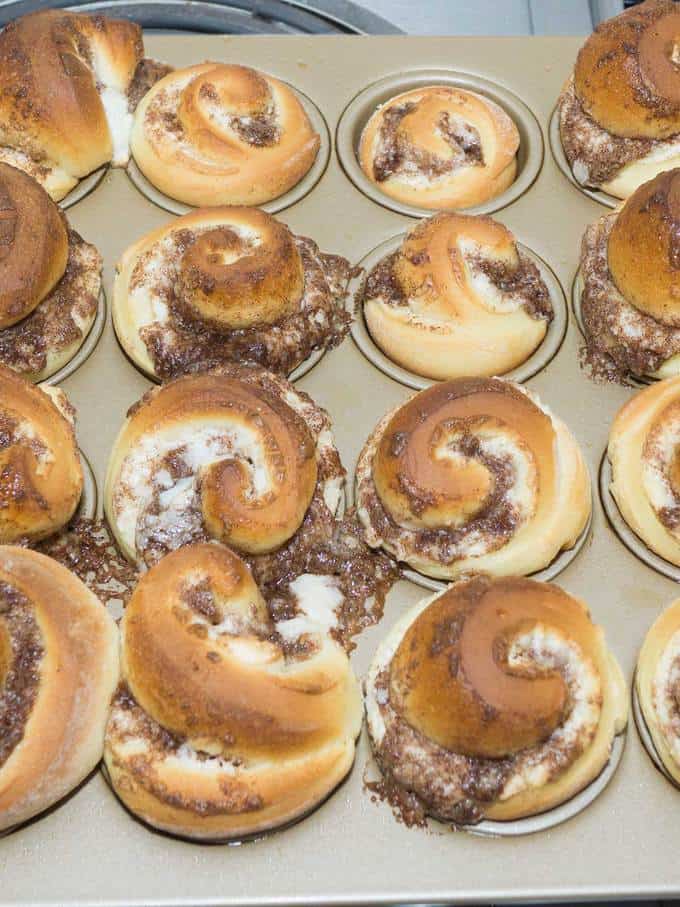 While the cinnamon rolls were baking, I made the frosting, which consisted of cream cheese, unsalted butter, vanilla extract and confectioners’ sugar. 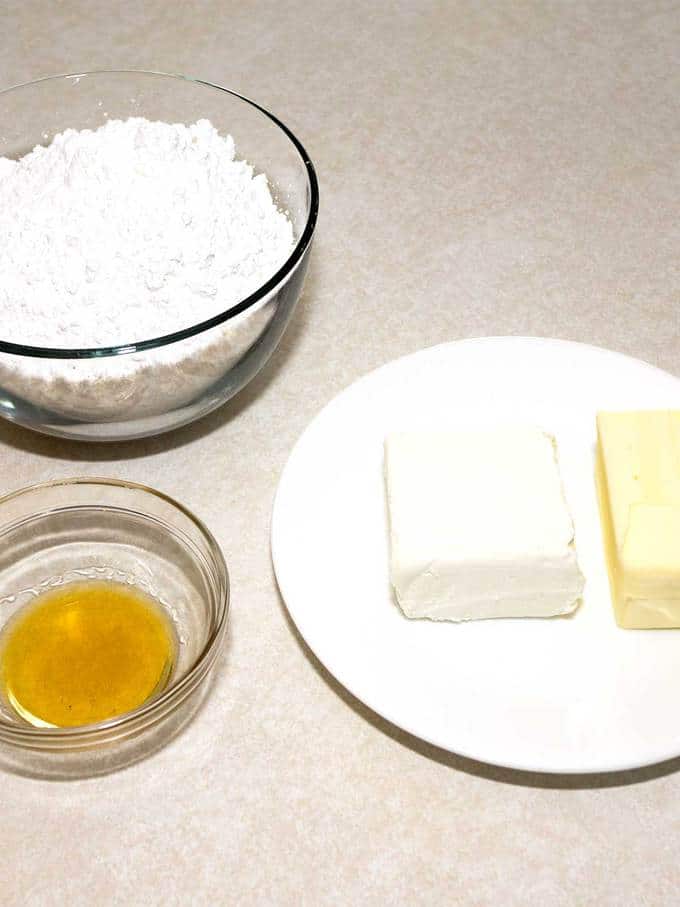 When the cinnamon rolls came out of the oven, I transferred them to a wire cooling rack.  While they were still warm, I spread the cream cheese frosting on the top, and decorated them with a sprinkling of purple, green and yellow cake sparkles. 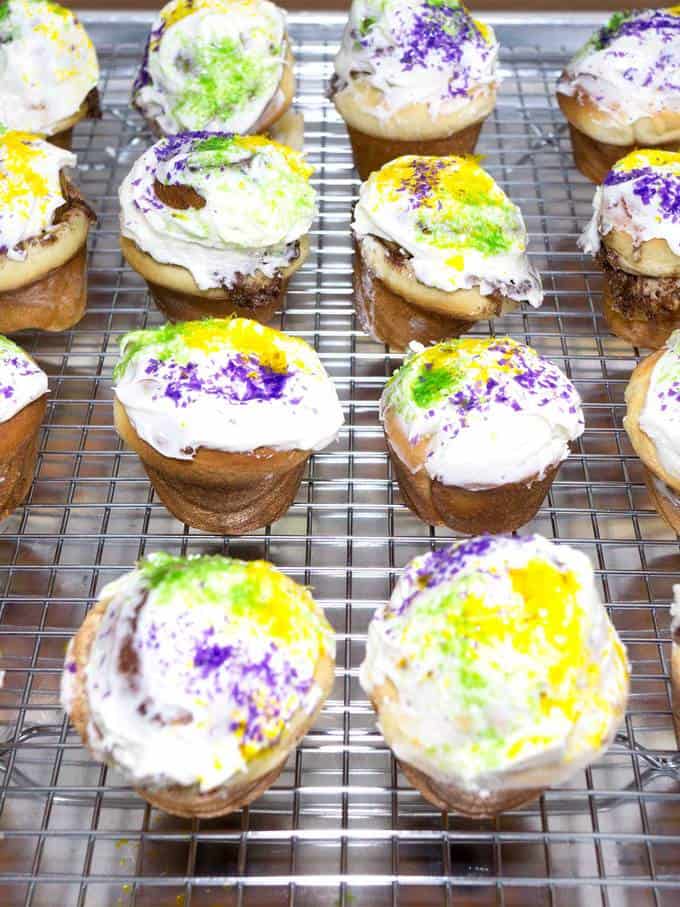 The recipe actually makes 48 mini-cinnamon rolls, which is a lot.  Therefore, I only baked one of the pans, and froze the other for later use.  Oh my – talk about good!  These little gems are incredible.  Yum! 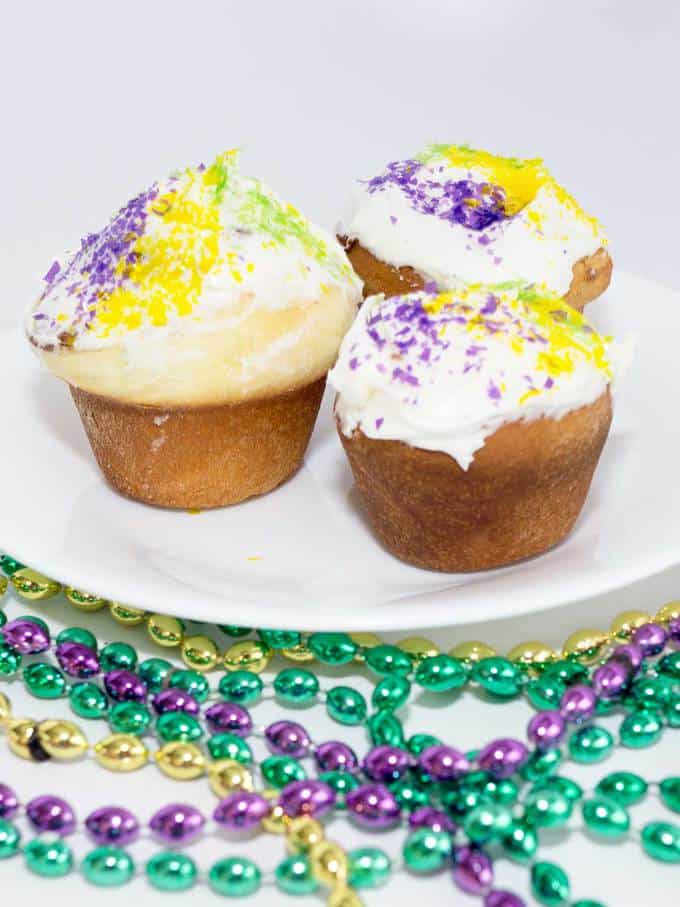 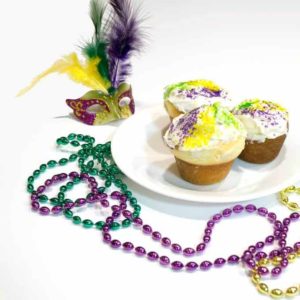