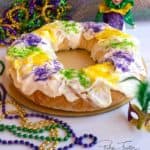 Traditionally, a tiny plastic baby is hidden in the King Cake. Whoever, ends up with the baby is named “King” for a day and bound by custom to host the next party and provide the King Cake.

New Orleans King Cake is an annual tradition in our house. Every year, I experiment with a different variation of the bread dough.

However I approach making the king cake, the one constant is that I use the bread machine to make the dough.

This year’s king cake is probably the best I’ve ever made. Like you, I learn from my successes and failures!

For this king cake, I used an adaptation of King Arthur’s Perfectly Pillowy Cinnamon Rolls which was the 2021 Recipe of the Year. What intrigued me about the King Arthur recipe was the Japanese technique called tangzhong.

With the tangzhong method, a small amount of flour is added to milk and cooked until a paste forms. When the paste is added to the remaining ingredients of a yeast bread, the result is a super soft bread that stays moist for a number of days.

I have to say that I was skeptical about this because of the significantly higher ratio of liquid to flour that the recipe used. However, the result was amazing.

The king cake was much softer than past king cakes that I’ve made. In addition, the dough was a dream to work with.

Let me take you on my journey for this year’s New Orleans King Cake.

Here’s How I Made the Tangzhong

For the tangzhong, I whisked together 4 ½ tablespoons of bread flour and ¾ cup of milk in a small saucepan.

I heated the mixture over medium heat until a paste formed that was thick enough that a spoon left a line on the bottom of the pan. This took about 5 minutes on my electric stove.

Here’s How I Made the Dough

Once the flour/milk paste was made, I added it to the pan of my bread machine along with more milk, butter, sugar, salt, bread flour and bread machine yeast.

I set the bread machine on the dough cycle and walked away.

Here’s How I Made the Cinnamon Sugar Filling

While the bread machine was doing its thing, I made the filling. I used light brown sugar, ground cinnamon, bread flour, unsalted butter and sea salt.

First, I whisked together the brown sugar, cinnamon, flour and salt until everything was well combined. Then, I added melted butter.

I stirred the mixture until the butter was fully incorporated.

Here’s How I Formed the King Cake

I was amazed at the feel of the dough. It was amazingly soft and supple.

I was amazed at how easily the dough rolled out. Unlike dough that generally springs back when rolled, this dough offered very little resistance.

Using a pizza cutter, I trimmed the dough on all sides.

Next, I formed the log into a circle and tucked the ends together. After that, I brushed the king cake with an egg wash (Photo 3) and cut slits on the top all the way around (Photo 4).

To allow the king cake to rise a bit, I warmed my electric oven by turning it on for exactly 1 minute and 45 seconds.

Then, I placed the king cake into my oven for about 20 minutes. I knew from experience that I didn’t want it to rise too much at this point. The reason was that the majority of the rising takes place when I bake the king cake.

I removed it from the oven, and transferred the king cake to a wire cooling rack set over a rimmed baking sheet.

Here’s How I Made the Cream Cheese Icing

While the king cake was in the oven, I made the cream cheese icing. In addition to cream cheese, I used confectioners’ sugar, unsalted butter and vanilla extract.

I also had on hand purple, green and yellow food glitter to sprinkle on top of the king cake, and a little plastic baby.

I added the confectioners’ sugar, cream cheese, butter and vanilla extract to a bowl and beat it on high until it was creamy and smooth.

Here’s How I Decorated the King Cake

I let the king cake cool for about 10 minutes before I decorated it with the cream cheese icing. Then, I sprinkled on the purple, green and yellow food glitter.

I didn’t bake the plastic baby in the king cake because I was concerned about it melting. Rather, I placed it on the outside.

If you’re a fan of the New Orleans King Cake, you might be interested in these recipes:

I hope you liked this recipe for King Cake as much as I do. If so, please consider rating it and leaving a comment. Also, if you’d like to receive notifications of new posts by email, enter your email address in the Subscribe box. 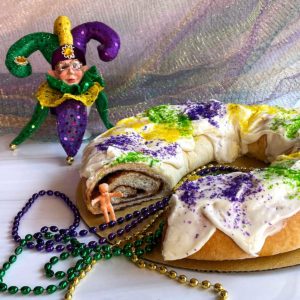