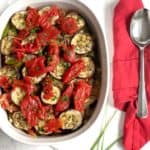 Ratatouille à la Julia Child is an amazing dish. My inspiration for this dish was Julia Child’s recipe in The Way to Cook. I’ve been making this ratatouille for some time. As always, her recipe and approach never disappoint. It is the perfect vegetarian dish that is loaded with delicious ingredients that are cooked to perfection. 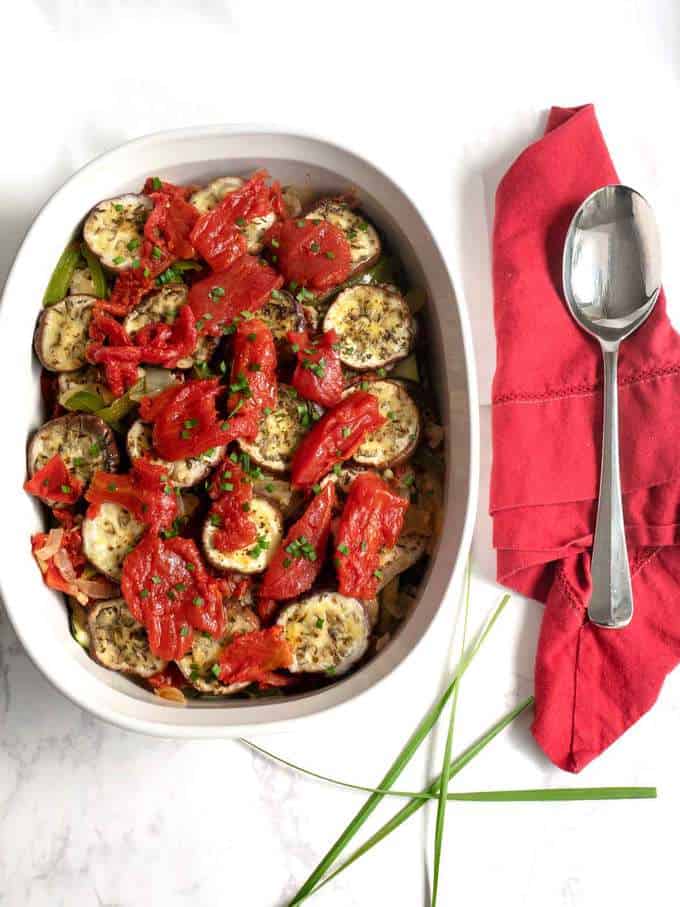 As she indicated,”numerous recipes for this wonderful Provençal eggplant casserole exist, and I think the best of them direct that the vegetables cook separately, then finish with a short communal simmer. Thus each one, rather than entering into a mish-mash relationship, retains its own character.” Yet again, Julia got it right! In fact, the Master Taste Tester was so impressed that he said that this would be our staple should we ever decide to go vegetarian!

I first blogged about this amazing dish on January 17, 2016. Since then, I’ve tried simplified approaches to making ratatouille and keep coming back to Julia’s recipe. I have made two modifications to her original recipe though. First, rather than using fresh tomatoes, I use canned whole tomatoes. The reason is that fresh tomatoes these days are pretty tasteless. However, the canned tomatoes are brimming with flavor. Second, I use Japanese eggplants (pictured below), if I can find them. The reason is that the skin on Japanese eggplants isn’t quite as thick.

Another delicious recipe using eggplant is my Eggplant Parmesan. You should try it! 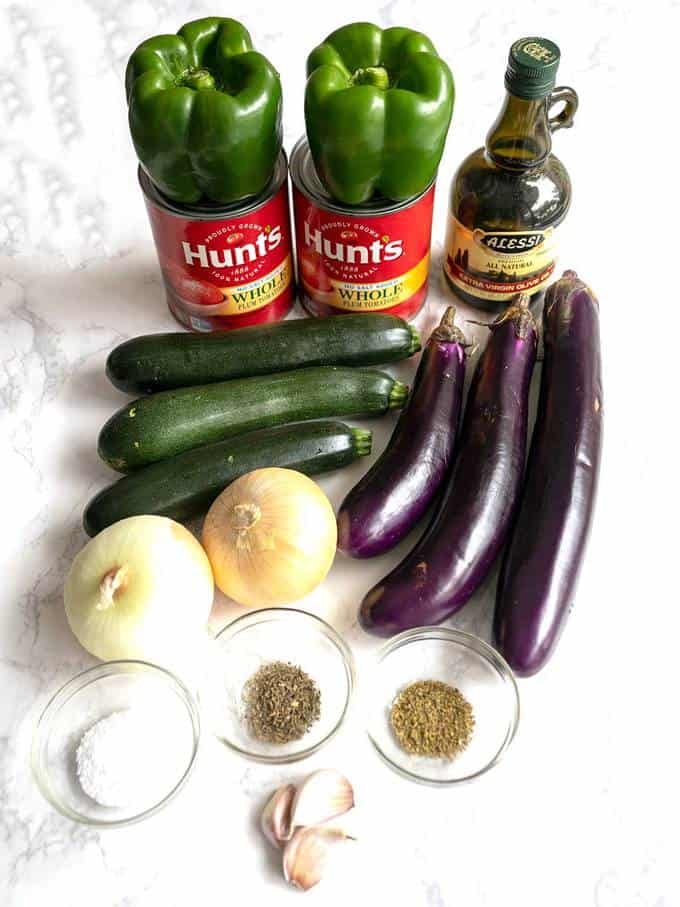 Starting with the eggplant, I removed the green cap and cut the eggplant into ⅜-inch crosswise slices. I salted the eggplant lightly on each side and spread the slices on paper towels to drain. After 20 minutes, the eggplant had given up a lot of its moisture. I patted each piece dry with paper towels and arranged them on a large rimmed baking sheet that I had lined with non-stick aluminum foil. Then, I lightly brushed each piece with olive oil and sprinkled on some dried oregano and thyme. Next, I covered the baking sheet with aluminum foil and baked the eggplant in a preheated 400° F oven for about 15 minutes, just until it was tender. 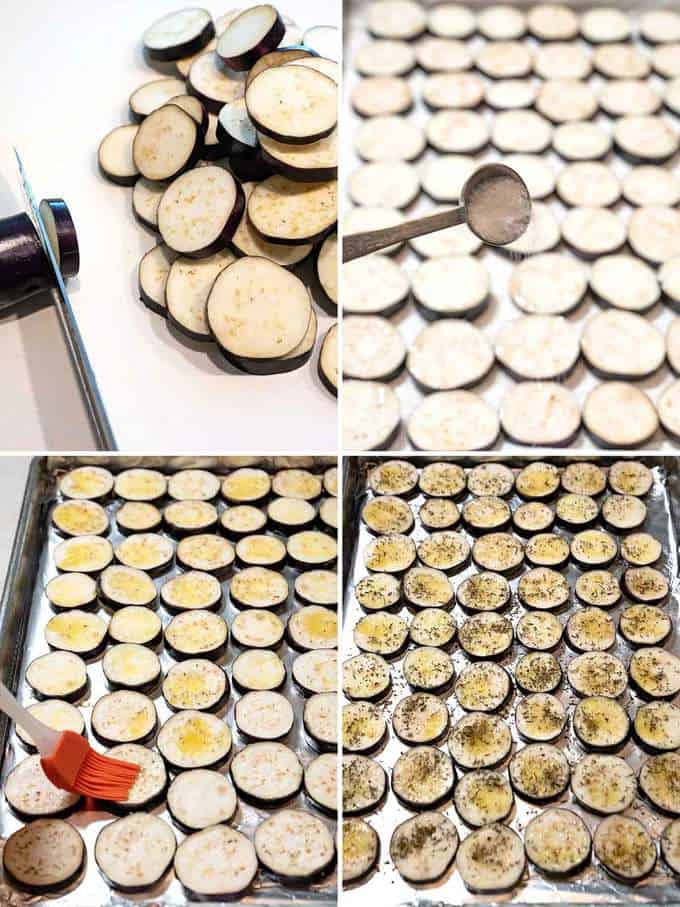 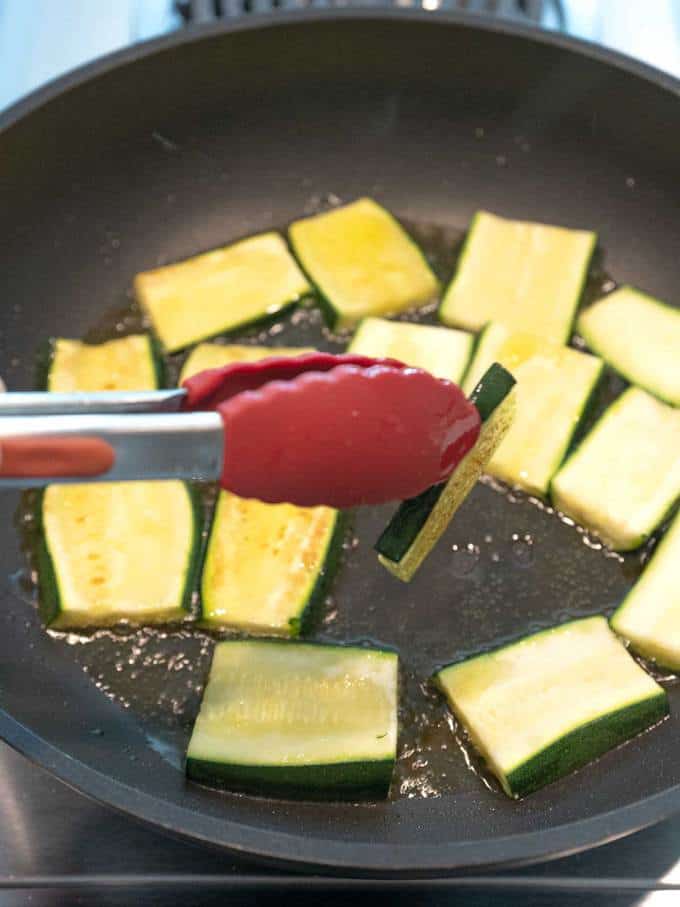 Now came the time to cook the onions, bell pepper, garlic, and tomatoes. The mise-en-place was standing ready. 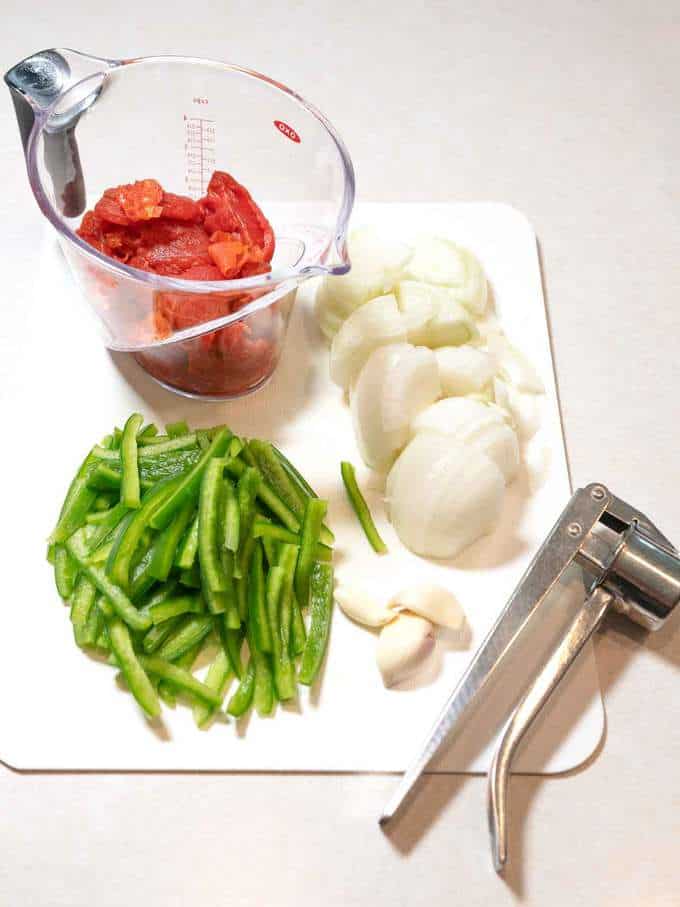 In the same skillet that I had used for the zucchini, I sautéed the sliced onions over medium heat until they were tender.  This took about 7 minutes. Then I added the bell pepper and garlic to the onions. I increased the heat to medium high and continued cooking the mixture for several minutes until the bell pepper slices were tender. Before adding the tomato, I set aside about ½-cup for later use. Then, I added the rest of the tomato to the onion/bell pepper mixture.  I continued cooking the mixture over medium high heat for several more minutes until the rendered juices from the tomatoes had evaporated. 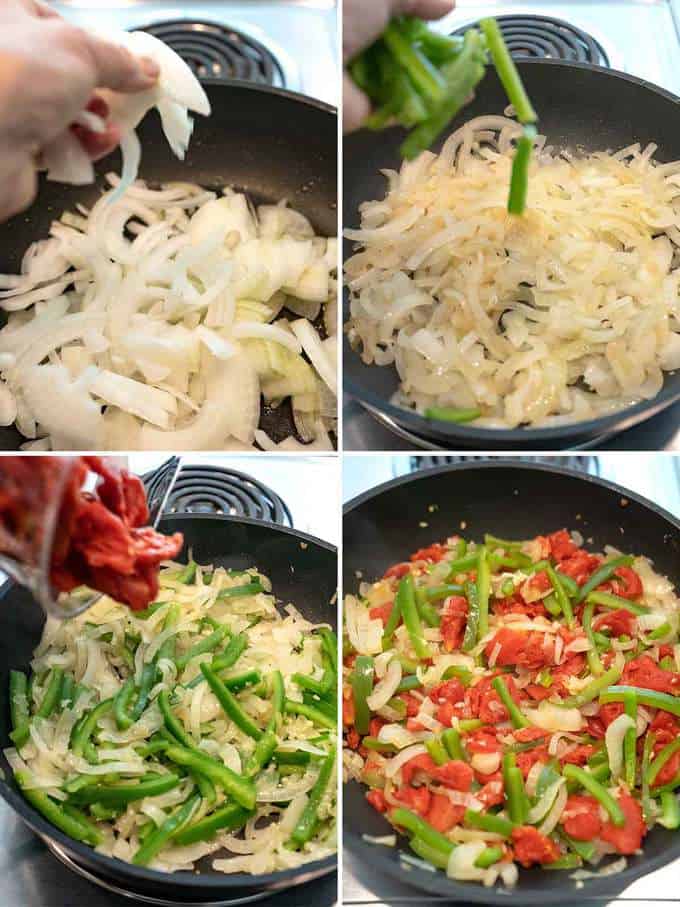 I layered the different ingredients in a covered casserole dish as follows: (1) ⅓ of the onion/bell pepper/garlic/tomato mixture; (2) half of the zucchini; and (3) ⅓ of the eggplant. Then, I repeated this layering one more time. 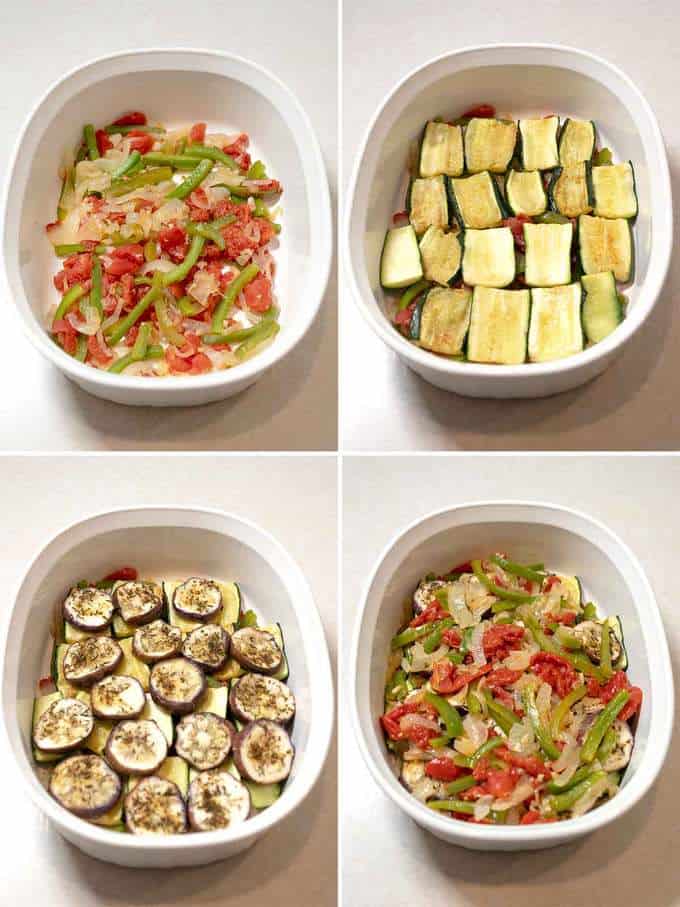 To finish, I added the remaining ⅓ of the onion/bell pepper/tomato mixture, the rest of the eggplant slices and the reserved tomatoes.

At this point, I covered the dish and put it in the refrigerator for later on. 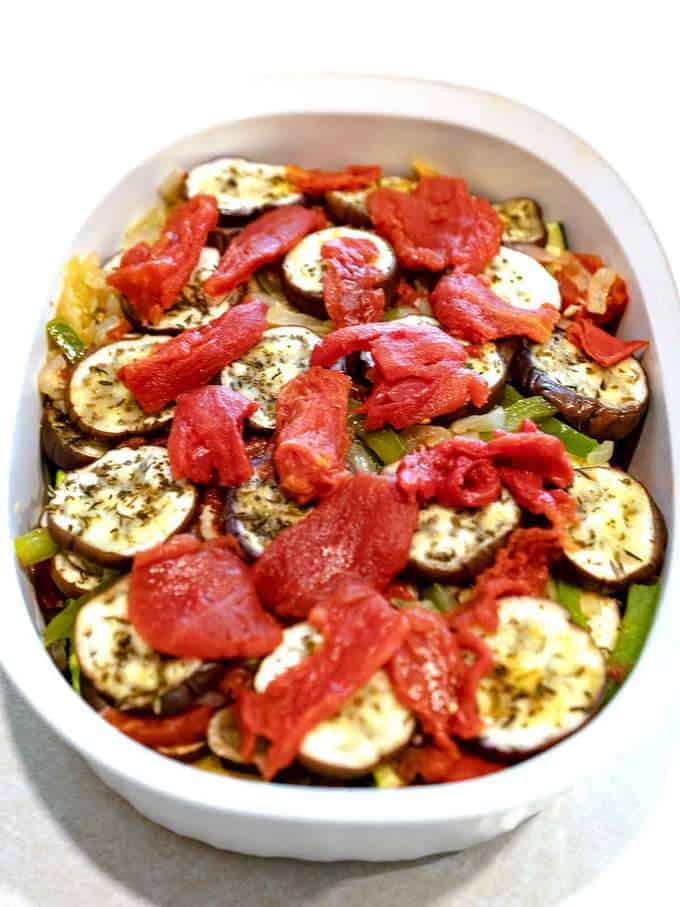 I covered the ratatouille and baked it in a preheated 350° F oven for about 25 minutes, until everything was hot and bubbly.

After 25 minutes, I removed the Ratatouille from the oven. I served it with a freshly made baguette and chilled Chardonnay. It was absolutely delicious! I can’t wait to try the leftovers. Yum! 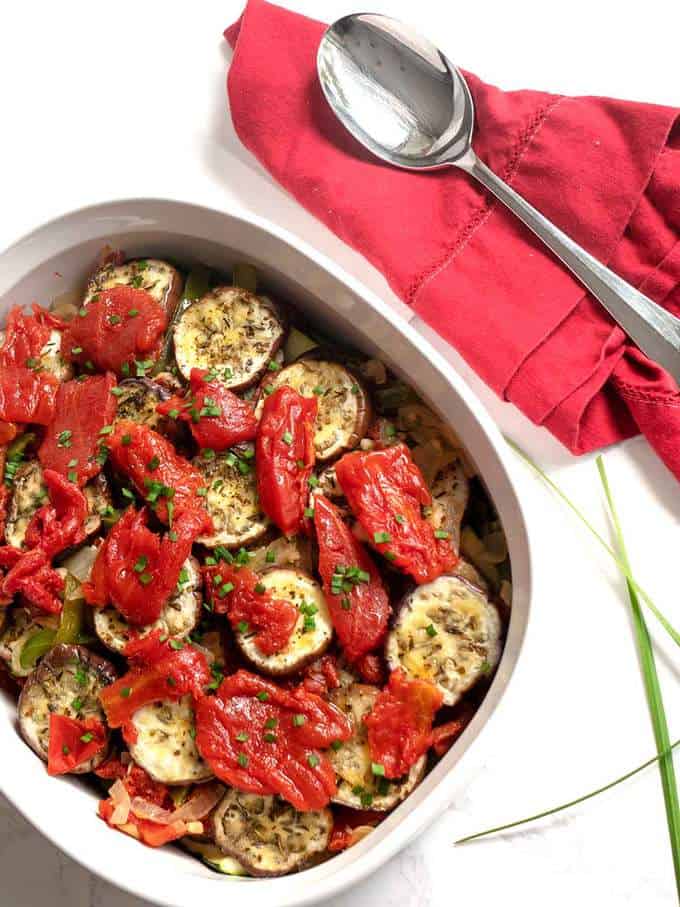 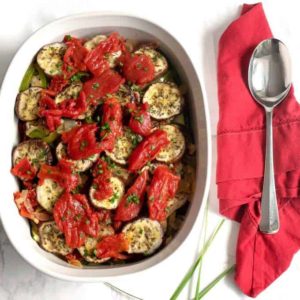 Ratatouille à la Julia Child is an amazing dish. My inspiration for this dish was Julia Child's recipe in The Way to Cook. I've been making this ratatouille for some time. As always, her recipe and approach never disappoint. It is the perfect vegetarian dish that is loaded with delicious ingredients that are cooked to perfection.
4.67 from 6 votes
Print Pin Rate
Course: Side Dish
Cuisine: French
Prep Time: 1 hour
Cook Time: 1 hour
Salting Time: 20 minutes
Total Time: 2 hours
Servings: 8 servings
Calories: 111kcal
Author: Chula King