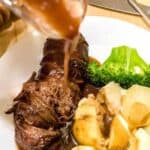 Beef Olives have been a part of British cuisine since the 16th century. Given the name, one would think that they actually contain olives. Actually, this is not the case. “Olive” is a British term for for wrapping meat around a savory stuffing, browning it and finishing it in a brown sauce.

The Master Taste Tester remembered his mother occasionally making Beef Olives, and suggested that I give it a try. Unfortunately, he didn’t have his mother’s recipe.

Since I had zero experience in making Beef Olives, I did a search for a recipe, and settled on one from Jamie Oliver as a starting point.

This Is What You’ll Need

Here’s How I Made The Stuffing

The stuffing for the Beef Olives was basically a savory sausage.

It’s as simple as that!

Here’s How I Made This Delicious Recipe.

Next, I wrapped the beef around the stuffing and tied the Beef Olive with some cooking twine (Photo 2).

After removing the browned meat, I added the onions and carrots to the pan. I cooked them over medium heat for about 10 minutes (Photo 4).

Finally, I added the beef broth (Photo 5), wine (Photo 6), salt, freshly ground black pepper and dried thyme to the pan. I brought the mixture to a boil.

Given this, it would have been easier to have cooked everything in the Dutch oven in the first place. Oh well, I was still learning!

After three hours of cooking, the meat was literally falling apart (Photo 8).

I started by removing the Beef Olives from the Dutch oven and pouring the liquid into a wire strainer set over a bowl. Using the back of a spoon, I pressed as much liquid as possible from the vegetables.

I thought that the sauce was a bit thin. Therefore, I thickened it with some Bisto mixed with beef broth.

I returned the Beef Olives to the Dutch oven for about 5 minutes to ensure that they were fully heated. Before serving them, I removed the twine.

I served the Beef Olives with steamed fresh broccoli and new potatoes, topped with the incredible sauce. They were fork tender and absolutely delicious. Yum!

If you’re in the mood for some more traditional British fare, check out my Sheppard’s Pie, Cornish Pasties, or Toad in a Hole.

I first posted this beef olive recipe on January 8, 2017. This repost contains updated text and photos, but the same great recipe.

I hope you liked this recipe for Savory British Beef Olives as much as I do. If so, please consider rating it and leaving a comment. Also, if you’d like to receive notifications of new posts by email, enter your email address in the Subscribe box. 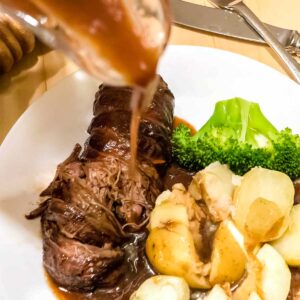 Beef Olives have been a part of British cuisine since the 16th century. Given the name, one would think that they actually contain olives. Actually, this is not the case. “Olive” is a British term for for wrapping meat around a savory stuffing, browning it and finishing it in a brown sauce.
4.5 from 10 votes
Print Pin Rate
Course: Main Course
Cuisine: English
Prep Time: 20 minutes
Cook Time: 3 hours 15 minutes
Total Time: 3 hours 35 minutes
Servings: 4 servings
Calories: 848kcal
Author: Chula King