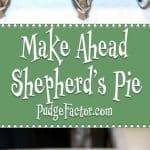 Shepherd’s Pie is a traditional staple of British and Irish cooking. It’s easy to make, and incredibly tasty. Shepherd’s Pie can be made ahead and frozen for an anytime meal. In fact, I typically have several in the freezer for those evenings when I don’t feel like spending a lot of time in the kitchen. 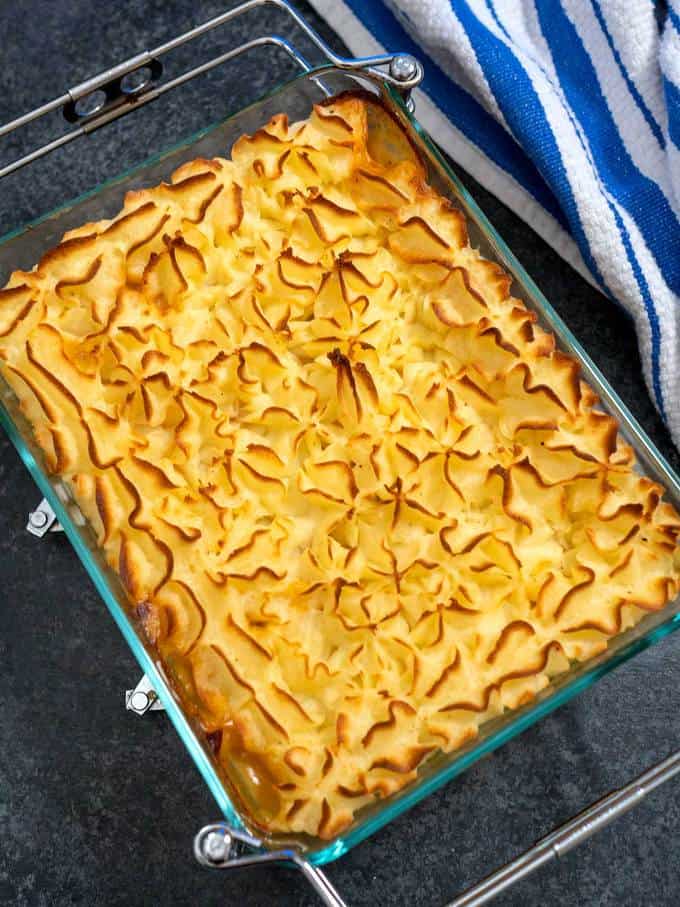 Invariably, shepherd’s pie is at the top of the Master Taste Tester’s list for those evenings when we just reheat something!

Here’s How I Made the Filling

As a starting point, I whisked the Bisto, Worcestershire sauce, tomato paste, and Dijon mustard with the chicken broth and set it aside.

Next, I browned the ground turkey in a non-stick 12-inch skillet over medium heat. I made sure that I broke the turkey up into small pieces.

When all of the pink was gone, I transferred the turkey to a wire mesh strainer. I ran it under hot water to remove as much of the fat as possible and further broke it up with my fingers.

While the turkey was draining, I wiped out the skillet with a paper towel. I set it over medium heat and added some olive oil.

When the oil was hot, I added the chopped onions and diced carrots. I sautéed them for about 5 minutes until they started to become tender.

Next, I returned the ground turkey to the skillet with the onions and carrots. After stirring to combine everything, I added the chicken broth mixture.

I brought the turkey mixture to a boil over medium heat, covered the pan, and lowered the heat to low. I cooked the mixture for about 40 minutes until the carrots and onions had lost all crunch.

After 40 minutes, I uncovered the turkey mixture, removed it from the heat, and added the frozen green peas.

I divided the turkey mixture among three Pyrex dishes, with approximately 17 ounces going into each of the dishes. Yes, I’m a foodie nerd – I weigh everything!

With the filling done, I turned my attention to the mashed potatoes.

I cooked the potatoes in salted water for about 20 minutes until they were quite tender. Then, I drained them in a wire mesh strainer.

When all of the water had drained off, I returned the potatoes to the pan I cooked them in, and added the cheddar cheese, butter, milk, and pepper.

I beat the potato mixture on high with my electric mixer until all of the lumps were gone.

From a trick that I learned from Susan, I used a large ice cream scoop to fill the piping bag fitted with a 1M star tip for piping the mashed potatoes.

Finally, I basically just piped large stars and finished it off by filling in any place where I could still see the turkey mixture.

I ended up with three delicious dinners!

I covered and froze two of them for a later date, and baked the third one in preheated 375°F oven for about 30 minutes.

Invariably, the Master Taste Tester suggests Shepherd’s Pie on those evenings when we just pull something from the freezer!

After 30 minutes, the mixture was bubbly and the mashed potatoes were nicely browned. I served the Make Ahead Shepherd’s Pie with steamed fresh Brussels Sprouts and a freshly made baguette. Yum!

If you liked this recipe for Make Ahead Shepherd’s Pie as much as I do, please consider rating it and leaving a comment. Also, if you’d like to receive notifications of new posts by email, enter your email address in the Subscribe box. 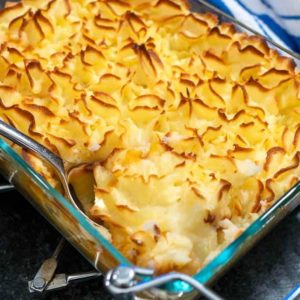 Shepherd’s Pie is a traditional staple of Irish cooking. It’s easy to make, and incredibly tasty. Shepherd’s Pie can be made ahead and frozen for an anytime meal. In fact, I typically have several in the freezer for those evenings when I don’t feel like spending a lot of time in the kitchen.
4.67 from 18 votes
Print Pin Rate
Course: Main Course
Cuisine: British, Irish, St. Patrick’s Day
Prep Time: 25 minutes
Cook Time: 1 hour 5 minutes
Total Time: 1 hour 30 minutes
Servings: 12
Calories: 236kcal
Author: Chula King