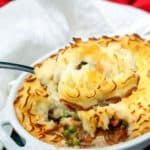 Cottage Pie is one-dish wonder that is the ultimate in comfort food. This traditional Irish dish can easily be made ahead of time and reheated. In fact, I generally have several Cottage Pies in my freezer for those evenings when I just want something easy and absolutely delicious.

It’s not unusual for the terms Cottage Pie and Shepherd’s Pie to be used synonymously. Technically, however, they are different.

Both Cottage Pie and Shepherd’s Pie are British dishes where meat and vegetables are cooked in a savory gravy and topped with mashed potatoes. However, the one difference between them is the meat that is used. Cottage Pie uses beef; Shepherd’s Pie uses lamb.

The name “Cottage Pie” originally was used for a pie made with any type of meat and mashed potatoes by peasants who lived in cottages. Over time, the “any type of meat” was replaced with beef.

Shepherd’s Pie is so named because shepherds take care of sheep!

I often use ground turkey for the meat and incorrectly call the pie either Cottage Pie or Shepherd’s Pie. Shame on me, but I couldn’t think of another name to use!

Ingredients That I Used For The Meat Mixture

Because it’s a Cottage Pie, a main ingredient is ground beef.

How I Made the Meat Mixture

Making the meat mixture for the Cottage Pie is relatively straightforward.

If I was using Bisto as the thickener rather than flour, I would have added it to the other liquid ingredients.

Once the cooked beef had cooled a bit, I used my hands to break it up into even smaller pieces. I prefer not to have big chunks of cooked ground beef – a personal preference of mine.

I cooked the onions and carrots over medium heat for about 5 minutes. After 5 minutes, I returned the ground beef to the pan.

I stirred the combine the flour with the meat and vegetables. Then, I added the beef broth mixture. I stirred the Cottage Pie meat mixture and heated it, stirring constantly until it was bubbly and thickened.

I covered the pan and simmered the meat mixture for about 45 minutes until the meat was tender and the carrots were well cooked.

How I Made the Mashed Potatoes

When I cook potatoes, I always put a wooden fork into the pan to prevent the pan from boiling over. I’m not sure why this works, but it does!

Then, I returned the potatoes to the pan and added the butter, milk, pepper and shredded cheese.

Since I was going to pipe the mashed potatoes on top of the meat mixture, I wanted to ensure that there were no lumps to clog the piping tip.

Because it’s just the two of us, I consistently divide the mixture among three oven-safe dishes. That way, we have one Cottage Pie for dinner and the other two are put into the freezer. You could certainly make one big Cottage Pie!

Then, I piped swirls of the mashed potatoes onto the meat mixture.

I ended up with three amazing Cottage Pies.

I popped one of the Cottage Pies into a 375° F oven for 30 minutes and froze the other two. After 30 minutes, top of the potatoes was nicely browned and the meat mixture was bubbly.

I served the Cottage Pie with steamed collard greens and steamed Brussel sprouts. What a tasty dinner we had. Yum!

What to Serve with Cottage Pie

In a way, Cottage Pie is a meal in and of itself. After all, it has meat, vegetables and potatoes all in one dish! Therefore, the sides are really incidental to the meal.

Because the Master Taste Tester likes Brussel sprouts, I often serve them with the dish. In the winter time, I like serve collard greens on the side. At other times, a light salad or steamed broccoli goes well with the Cottage Pie.

Finally, I sometimes serve crusty French bread with it.

Aren’t you washing away flavor by draining and rinsing the cooked ground beef?

It may seem that I’m rinsing away beef flavor along with the fat after its been cooked. However, I’ve consistently found that it’s what you add to the ground beef that really gives the dish its flavor. You could, however, skip this step.

What size containers were used then the mixture is divided by 3?

The white dish is 1 ½ quarts. The two rectangular Pyrex dishes are also 1 ½ quarts and 8 x 6-inches.

85% ground beef works fine in this recipe, especially because the fat is rinsed away after the beef is cooked.

Is there a substitute for the ground beef?

How are the Cottage Pies that are froze cooked?

I like to thaw the frozen Cottage Pies in the microwave before putting them in the oven. That way, the oven timing is the same.

The leftovers are just as good the next day. I generally heat the leftovers in the microwave.

In some quarters, the British have a reputation for less than inspiring cuisine. I think that’s totally wrong as evidenced by the following:

Watch How I Made This Delicious Cottage Pie

If you liked the recipe for Make Ahead Cottage Pie, please consider rating it and leaving a comment. I’d love to know how you liked it! 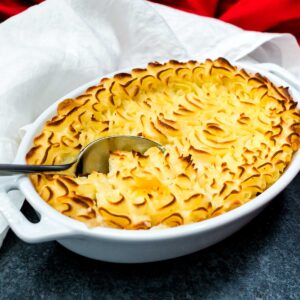 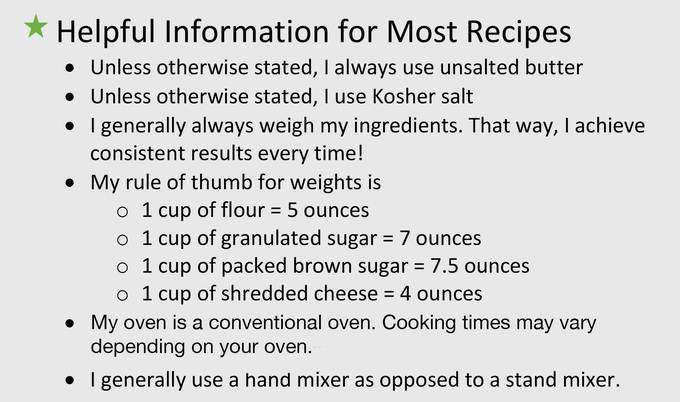